Merced, California:The campers on our right, Sue and Gary, left very early this morning. We know this because their car alarm blasted for about a minute. Then, it was so difficult for Gary to make his left turn to exit because he had to get around our bus, which was practically parked in the road. Good morning, Gary, and SO SORRY! It seems nearly every time we stay at the Bakersfield RV Resort, a car show is being held on the northern end of the campground. The RV sites are filled with old cars, fancy cars, antique cars, restored cars, race cars, imported cars, custom cars and Mustangs. Always Mustangs. Did I ever tell you about Dave’s 1967 Ford Mustang? He returned to the University of Oregon for his junior year with a car, which he earned while working over the summer in his hometown - Merced, California. The car was a two door, automatic transmission, 289 V-8, turquoise with turquoise vinyl interior. Lap belts only. A boyfriend with a car in college? Heaven. 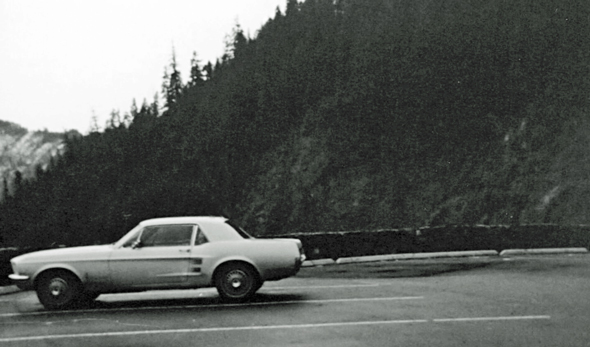 Dave had the car through college, and kept it as we moved to Portland after school and had it shipped east when we moved to New Hampshire in 1979. It was our only mode of transportation. 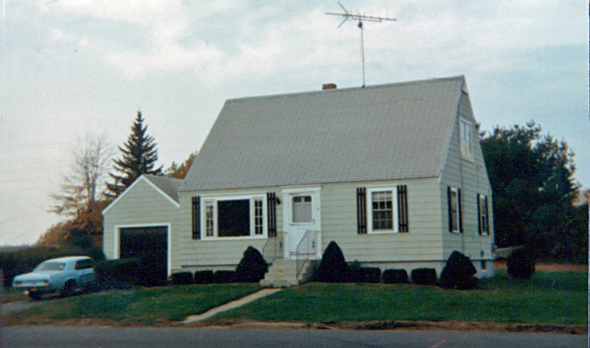 The Mustang - parked at our rental house in Exeter, New Hampshire, circa 1980.

When we moved to Asia in 1980, the car went into storage. After returning to the states, years later, Dave had a company car, (quite the norm for executives back in the day) and I bought a Volvo wagon to transport Lisa to and from school. His precious ‘Stang stayed in the garage. A two-car garage. Dave had to park his company car in the driveway, so the Ford would be protected. (No way I was giving up my bay of the garage in rainy Oregon.)

The Mustang sat in our Portland garage for six years, until the time Dave returned from a business trip and it was gone. I sold it to a guy who restored cars while Dave was away. To this day, Dave claims I sold the car without his permission or knowledge, but this is not true. A Boy and His Car. Facts get distorted through the sentimental passage of time, but there is one fact DT cannot get around. The title on the car was only in his name, so I could not have sold it without his signature… which I did procure before he left on the trip. It was best DT was out of town as his ancient Ford was towed from our property. I sold the car in 1993 for the same price he paid for it in 1979 - $1200.

I’ve never looked back. It was just a car and I was happy to have it out of the garage. But, Dave still gets nostalgic - especially when he sees a 1967 Mustang. Extra points if it is turquoise. 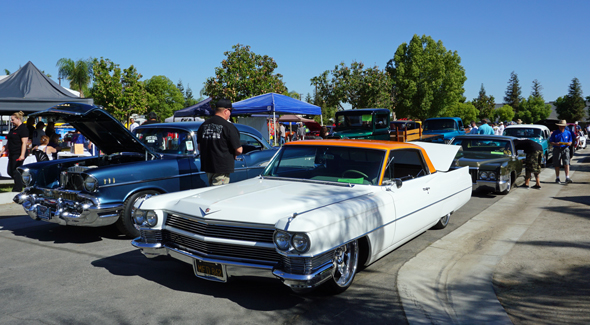 I could not gather a theme for the car show at the Bakersfield RV Resort today. Cars from many countries, from any year. They were all just old cars that someone really loved and had either restored to original condition or changed with an outrageous paint job. The RV park restaurant had set up a marquee and were providing breakfast burritos. Booths sold car-related stuff, sunglasses and handmade purses. There was a band and a raffle. See? This rally was theme-free. Hundreds of people attended. Attendee cars were parked for blocks along the road outside the campground. 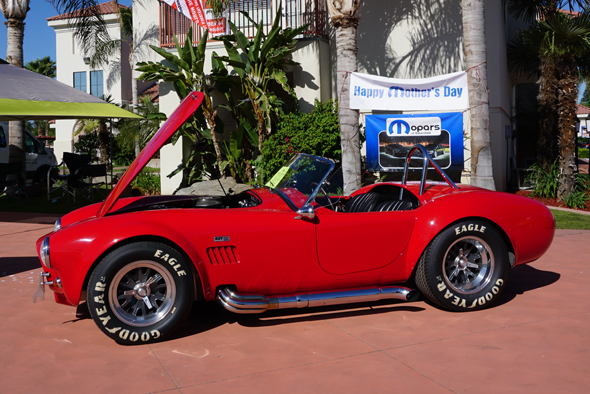 This amazing 1966 Shelby 427 Cobra was called the "million dollar car" at the show today. In 2007, a blue Cobra sold for over five million dollars at the Barrett-Jackson auto auction.

Other pretty cars I photographed today: 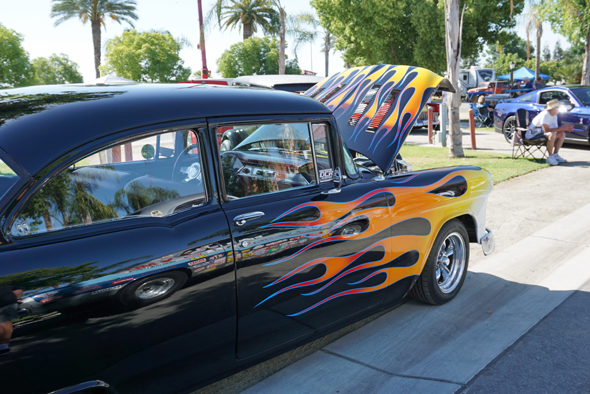 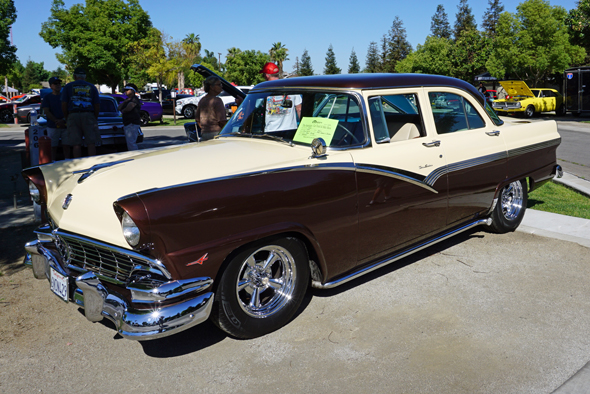 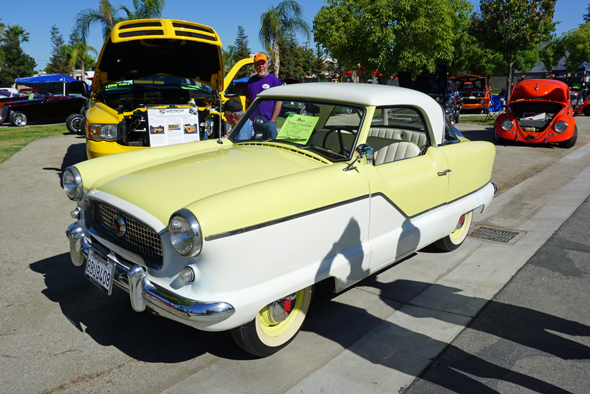 1957 Nash Metropolitan - made by Austin in England 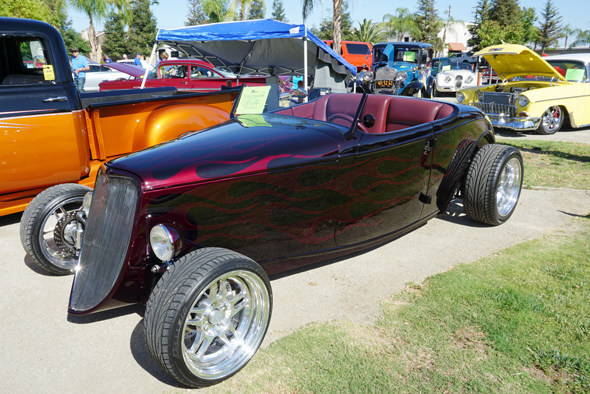 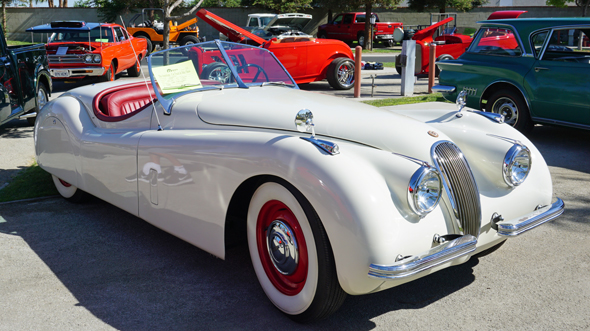 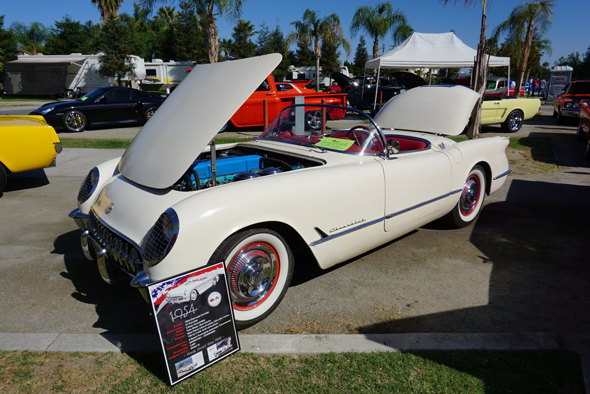 We left the RV park mid-morning and drove north to Merced, stopping for a lunch break at a rest stop on Highway 99. As we were eating, a landscaping crew arrived to mow and weed the rest area, pick up litter, and generally beautify the vicinity. A trio of orange-vested workers walked by our motorhome, and several other RVs parked in the rest area. One landscaper said something about how beautiful the RVs were. Another said how he hoped to have a RV one day. The third said we were probably inside having sex.

We were having lasagna. After lunch, we continued north to just south of Merced, where we are camped for the first time at The Lakes RV & Golf Resort. Though a 10-mile-longer drive from Merced than the RV park at Castle Air Base where we usually camp, we were ready for a change. Our afternoon was spent visiting with Dave's family, and we returned to the motorhome to watch the Giants lose to the Pirates, but enjoyed a great dinner as I put the ingredients for Spicy Chinese Beef Pot in the crockpot this morning, and it stewed away all day - resting in the kitchen sink while we cruised north on Highway 99.

Until my next update, I remain, your car-ambivalent correspondent.

« On the Road Again Mother’s Day »