A Great Day to be a Duck 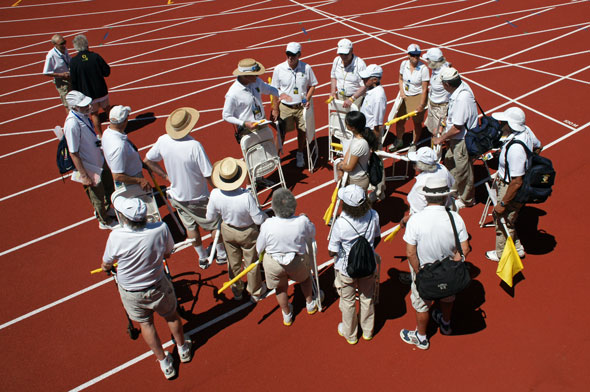 Before the meet started, I snapped this photo of a meet official pow-wow. A very dedicated and professional crew, these officials work as volunteers. They get a sandwich (if they are lucky to have enough time to eat the sandwich) as a reward for hours of hard work on the track. The purest form of a track fan. I don't think enough people know the officials work as unpaid volunteers, so I am here to announce - track & field officials are unpaid volunteers. Show them some love! 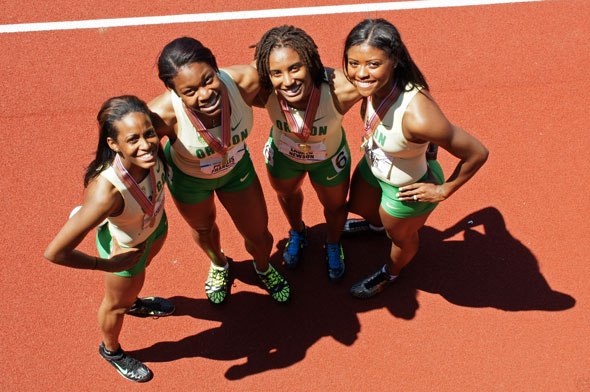 The second day of the meet started out with a BANG! The Lady Duck 4x400m team won the final. Hello everyone. We are the Women of Oregon and We Mean Business.Then the Oregon women just keep going - winning the 1500m and the 400m sprint. Then Miss Gardener won the 100m and Miss Newson came in second. (Like I said yesterday, it's all about the points. POINTS.) Things started getting a little freaky when The Ducks swept (and by swept, I mean 1,2 & 3) in the 800m and the 200m races. At this point, I told Tim Forbes that it was getting a little embarrassing. Now we're just showing off. At the final tally, the Duck women won their 4th straight Pac-12 title with 200 points! Stanfurd was second with a truly distant 124 points, followed by Arizona with 94 points and USC with 91. I do want to make a point of mentioning Oregon State. OSU finished in last (12th place) with 3 points.

I will surely go to hell for mentioning Oregon State scored three points, but the score can be also be found in the morning newspaper.

The Men of Oregon had a bit of a struggle on their hands. The men had won the conference championship five times in a row. The sixth time was going to be a big challenge. 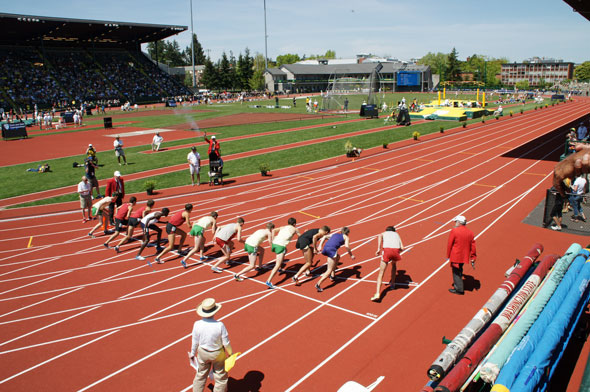 The Oregon men started out by the football team taking second place in the 4x100m relay, winning 14 points in the 1500m, then winning the 110m hurdles, taking second in the 400m and getting 3rd & 7th in the 100m dash. We weren't dominating, but consistently bringing in a ton of points. Then Elijah Greer won the 800m and Duck runners finished 4th, 5th & 7th in the 5000m. At a certain point in the afternoon, no amount of math could find a way for the Duck men to lose the meet. 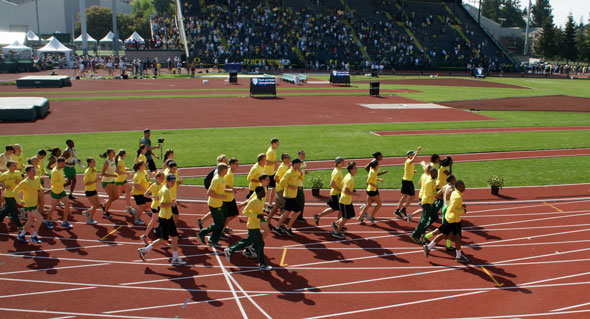 After the points were tallied, and the men had won with 140 points (Arizona State 116, Arizona 94, UCLA 96... Oregon State men were 12th place with 4 points), the Ducks took a victory lap. Men & Women together. Conference Champions.

It was a great day to be a Duck. 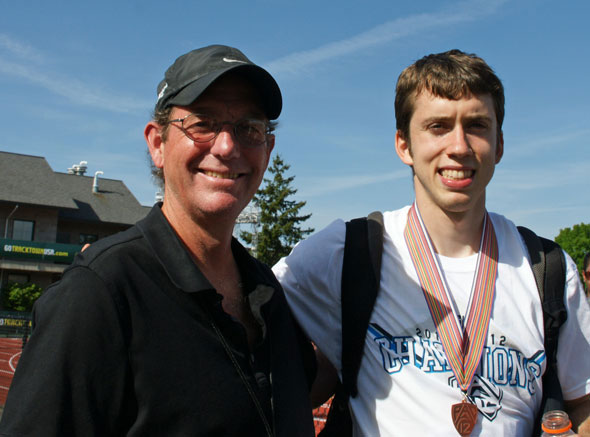 After the meet, DT posed with 800m champion, Elijah Greer. 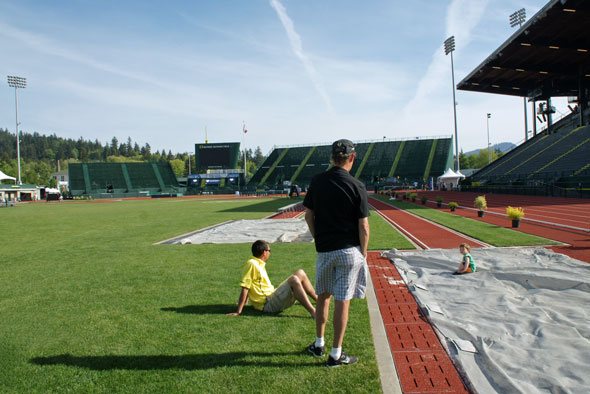 Much, much, much, much, much later... after the fans had gone home.... after the athletes had gone off to have dinner with their Mom's (it was Mother's Day!), I found DT on the infield with Oregon distance coach Andy Powell (in yellow) and his baby boy, Jake. Jake was playing in the world's largest sandbox - a long jump pit - and DT was chasing him around.

A perfect ending to a perfect day.

Until my next update, I remain, your very proud correspondent.
« Pac-12 Track & Field: Day One Casita Update »