Indio, California: Today was Steve's birthday, so we let him choose the excitement. First, of course, was exercise. 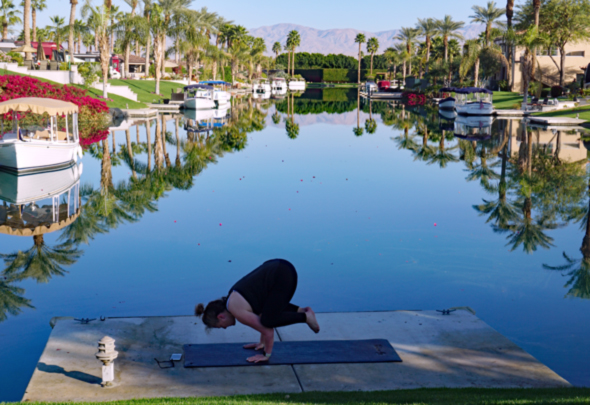 Kris began the morning with a little yoga on our boat dock. Dave went to the fitness center, Steve went for a run. I walked two loops around the resort and noticed Hughes Plaza was already being set-up for another Tailgate Tuesday event. (The restaurant/bar is closed on Tuesdays. So that we don't all starve, usually some-sort of event is planned in the evening at the plaza.) Tonight local vendors were coming to show their wares and try to intice us to buy. 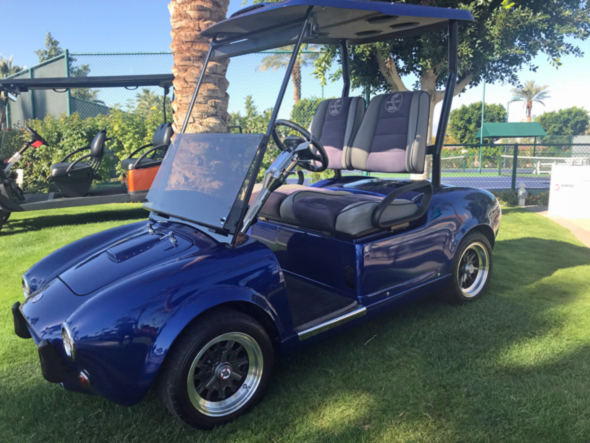 VIP Golf Carts (the company we use to store our golf cart over the summer) had already delivered four or five luxury golf carts to display. This pretty little Shelby would have looked great in our driveway... if she were green.

For lunch, The Birthday Boy decided we needed to go visit El Mexicali Cafe for their famous shrimp-stuffed peppers.

As I have written several times on this old blog - Mexicali, Mexico, has a large Chinese population as many Chinese immigrated to the area to work on the irrigation canal and railroad construction years ago. There is quite a blending of the cultures and peoples.El Mexicali Cafe celebrates the foods of the area and their most famous dish is shrimp-stuffed banana peppers - Chiles Gueritos Rellenos de Camaron - which are served with mayo, soy sauce and a squirt of lemon. It is the only Mexican restaurant I have ever visited with a bottle of soy sauce on the table. Sadly, my shellfish allergy has not allowed me to ever taste this sensation, but our table took down an entire order without my help. 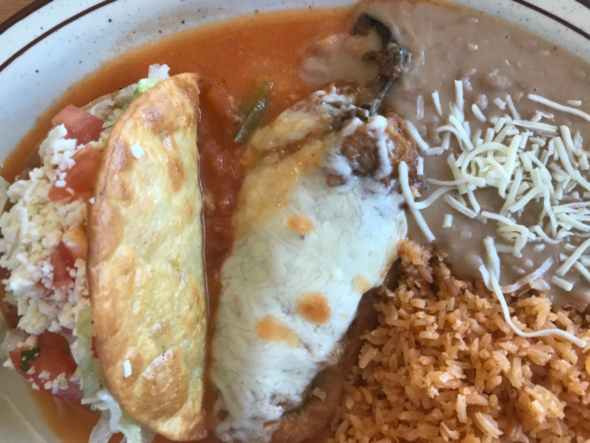 I was forced to eat more traditional Mexican fare - a taco and a chile rellano. Delish.

After lunch, The Birthday Boy wanted to go to Shields Date Garden to buy some dates. While we were there I had a message on my phone stating a helicopter would be landing next to the tennis courts at the Motorcoach Country Club at 1:45! This was another vendor showing off their wares at Tailgate Tuesday. We rushed home to watch the landing.

We all realized why we had seen a little helicopter buzzing the resort a few days ago - the pilot was checking-out his landing spot. 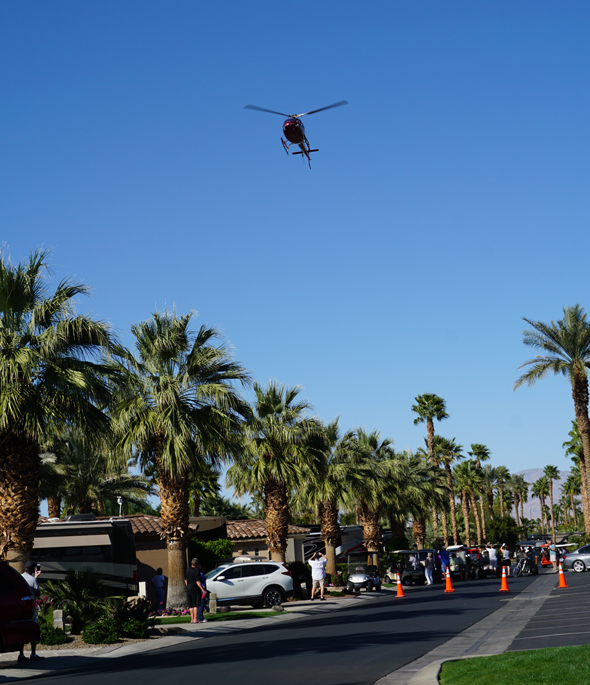 A little spot west of the tennis courts had been chosen. It was about the size of a hospital heli-pad... except there are no palm trees framing a normal heli-pad. 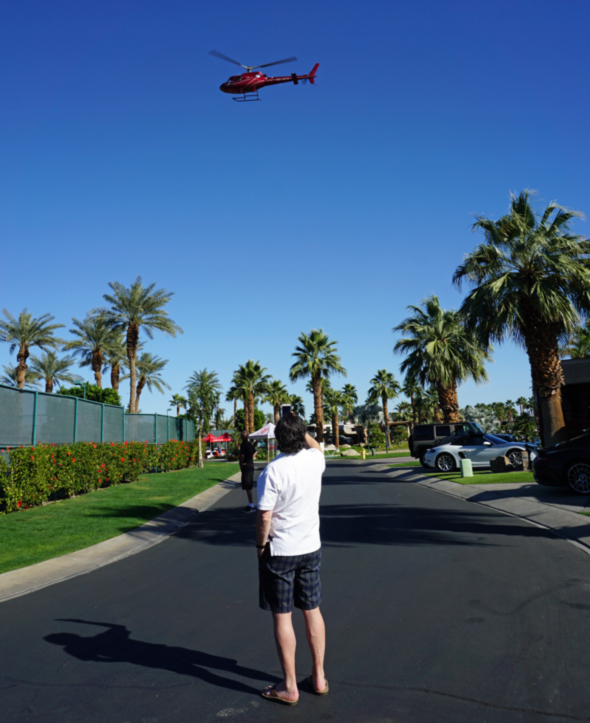 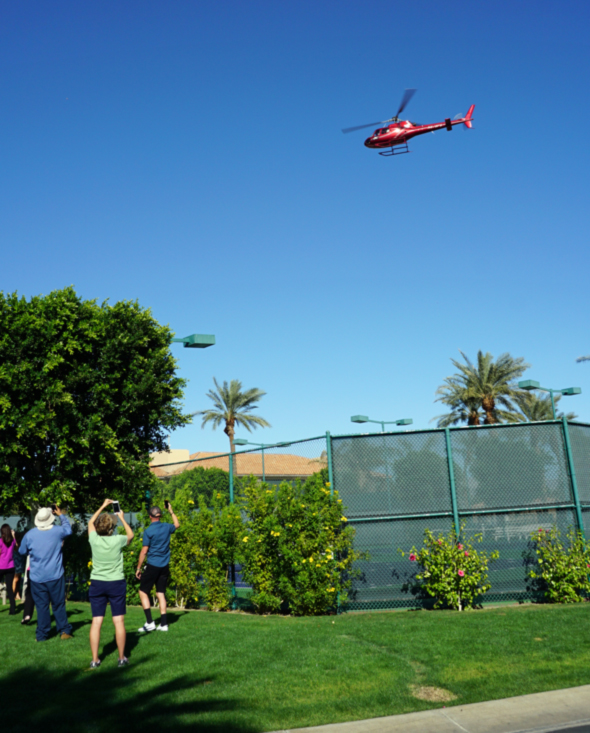 The pilot made several approaches

Finally, it was determined the space was too tight, or maybe there was too much wind, or maybe there were too many people with their iphones? Plan B! The pilot decided to land on the golf course... so we all raced over to the back nine. 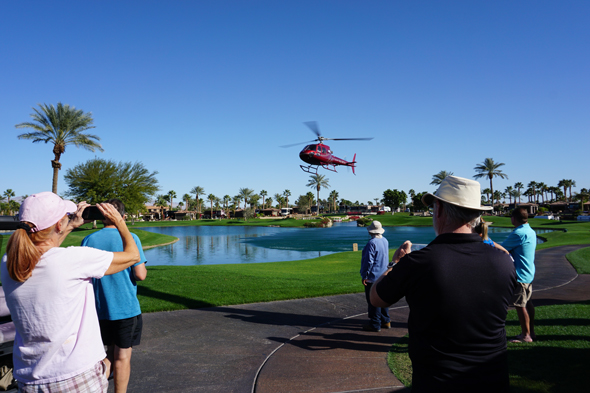 This option needed only two attempts 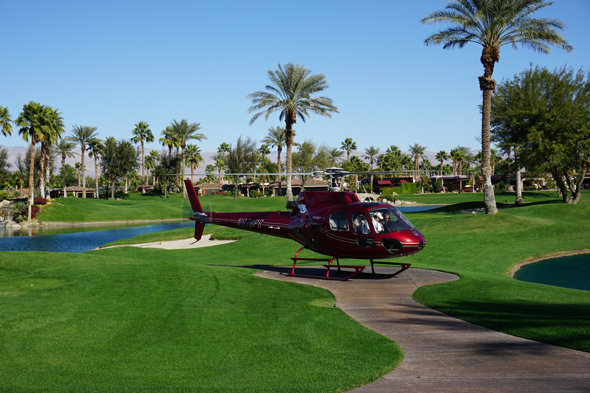 Touchdown! Perfectly placed in the center of a golf cart turn-around. This event was very exciting and unusual at this RV resort - they do keep us entertained. 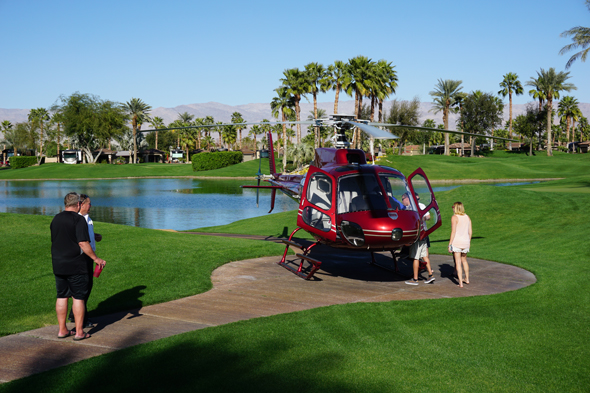 A member and their grandson were on the copter! How fun.

Quite a crowed gathered to watch the landing 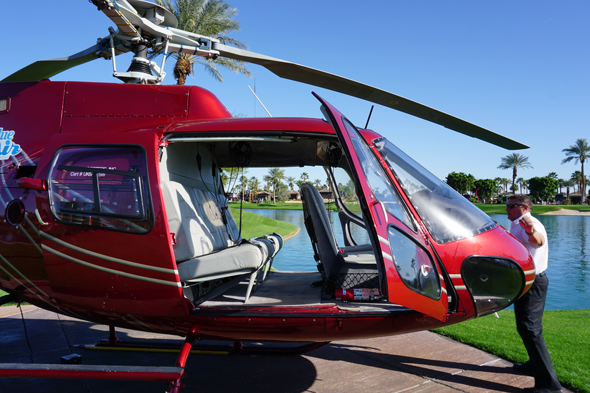 Then I received a message from The Motorcoach Country Club: the 18th hole on the golf course is closed.

A few hours later, back at Hughes Plaza, people were bringing potluck to share and the vendors were at their tents. 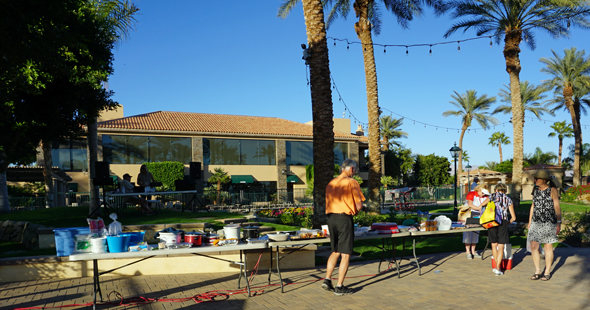 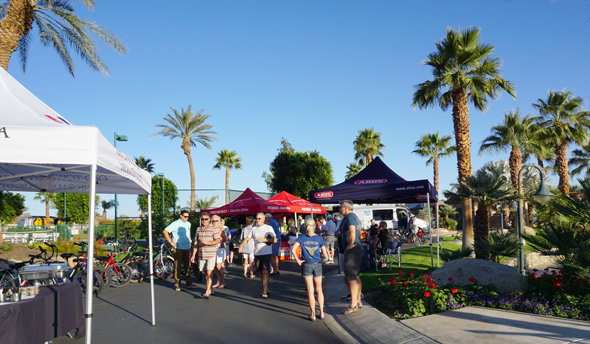 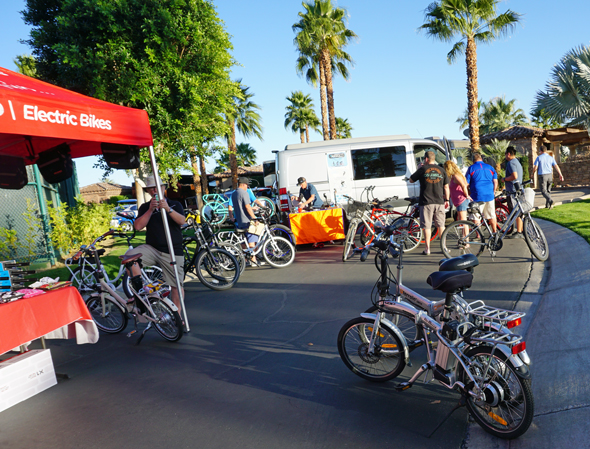 Pedego Electric Bikes are very popular in this resort. Pedego offered free tune-ups to owners tonight and hopefully sold several bikes. And if you are going to ride a bicycle, you will need a helmet. ABUS was here to display their safety helmets. 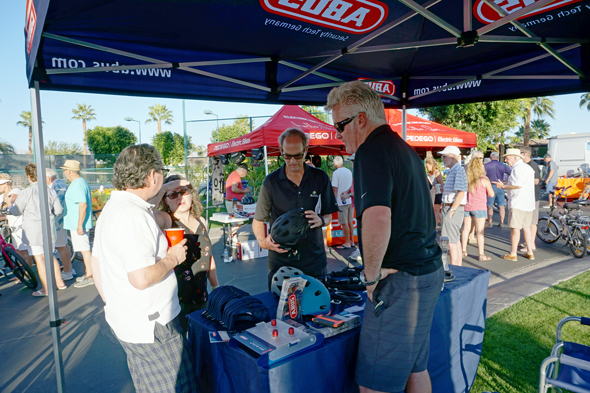 It was another great Tailgate Tuesday, but I did not think a RV park tailgate (especially during flu season!) would be a good choice for Steve's birthday dinner. He wanted to go to Happy Hour at Jackalope Ranch - so we did.

We ordered drinks and then Dave gave Steve and Kris a tour of the amazing property. While The Birthday Boy was away, I made sure our server knew it was his birthday. She said she would bring a gratis dessert - complete with candle. I knew Steve would just HATE all that attention, so agreed immediately! We ordered appetizers (for our dinner) and had a great time celebrating Steve's Special Day. 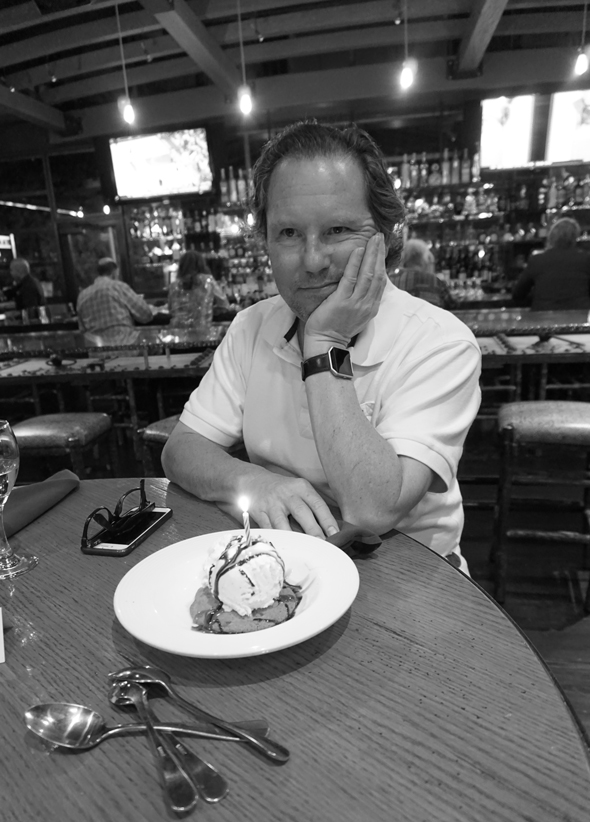 After we had asked for the check, the special dessert was delivered to the table. Isn't Steve soooooo excited???

« A Day in Borrego Springs Polo Under the Lights »