Knoxville, Tennessee:  A fabulous victory for My Ducks! We had a very long day and it is well after midnight as I begin this column... so here I go...

The weather this morning was simply horrid. Pouring buckets of rain from black skies until about 1:30 this afternoon. We (and our ponchos) headed over to the pretty University of Tennessee campus around 2p. We wanted to eat lunch before going to Neyland Stadium. The restaurants surrounding campus were packed, but we finally found seats at Hanna's Cafe. 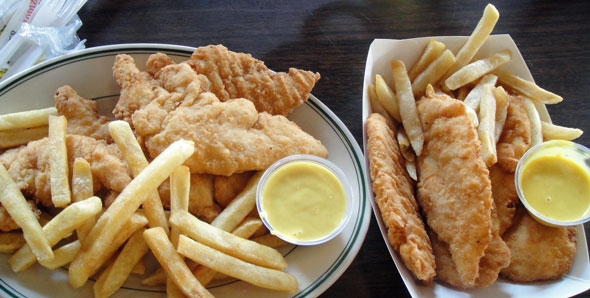 Mary and I ordered chicken strips. This is what we received - not quite the same thing. Pretty funny. The waitress said they ran out of plates in the kitchen. 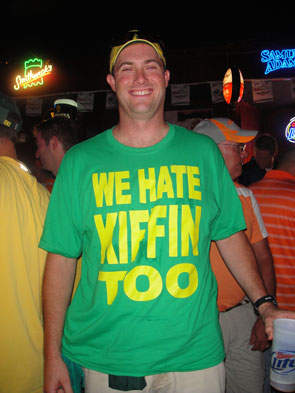 These are about the only two tee-shirts I photographed today that are polite enough to post on this website.

After lunch and a few brewskis, we walked to the football stadium. 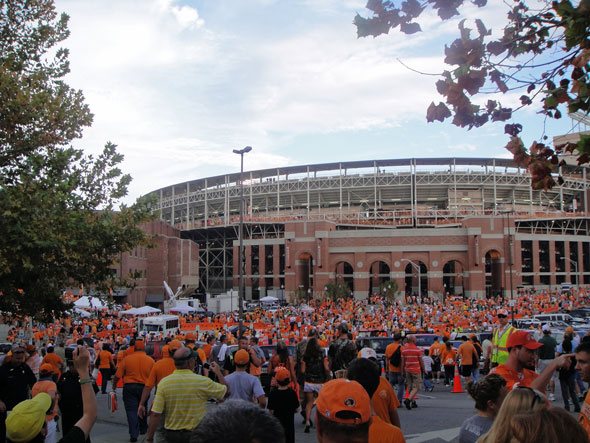 It was a sea of orange. 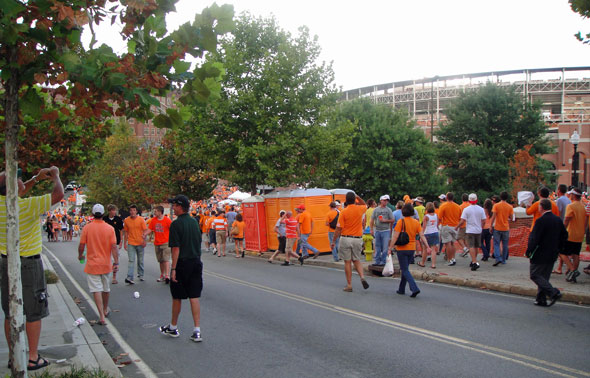 Even their porta-potties were orange. 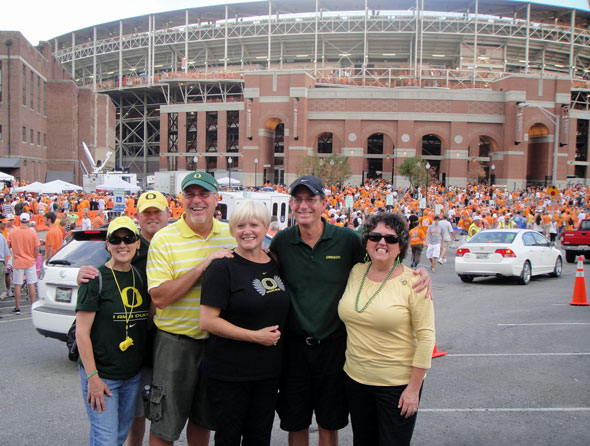 And here we are - together again at yet another football game! 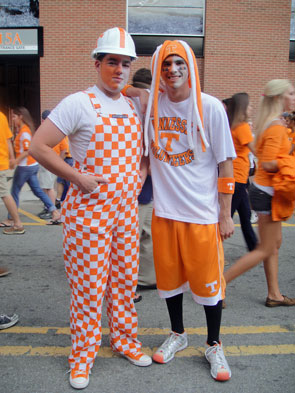 Of course, we were completely outnumbered by Vol fans. I am so thankful Duck fans do not have to wear orange and white checks.

Not a good color on me. 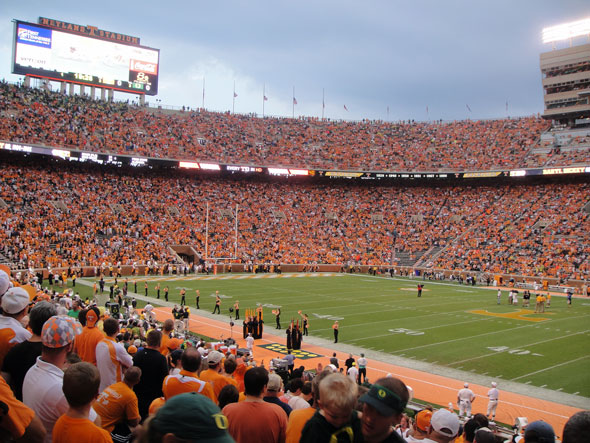 I am also thankful DT arranges for our seats at football games. We had a great view from the 20 yard line, up 23 rows from the field. 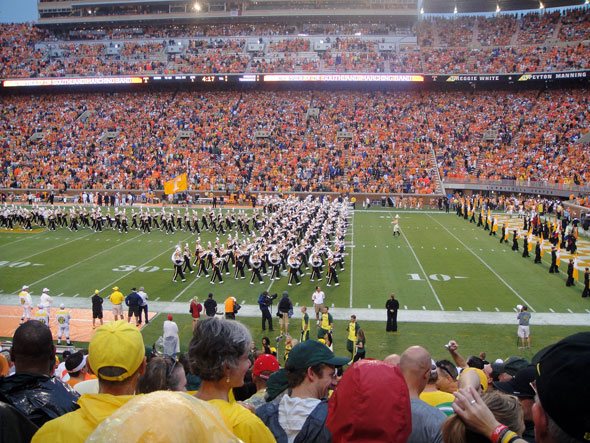 As long as I am being thankful... Our band did not travel to Knoxville (school doesn't even start until 28 September), so the University of Tennessee Marching Band played our fight song. That, my friends, is pure class! Thank you. Very much! 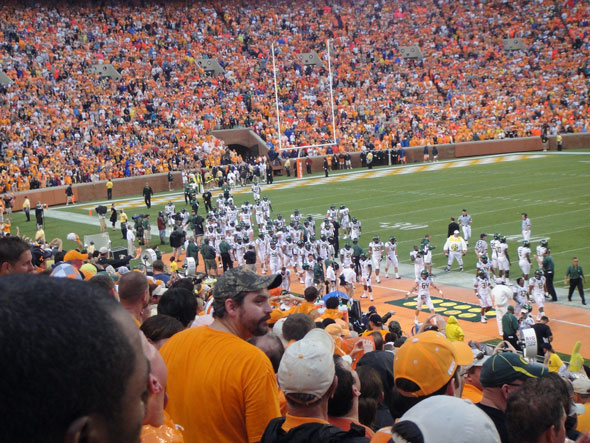 Here come the Ducks! Out of 300-plus possible combinations, the Ducks chose their green helmets with white pants and jerseys. 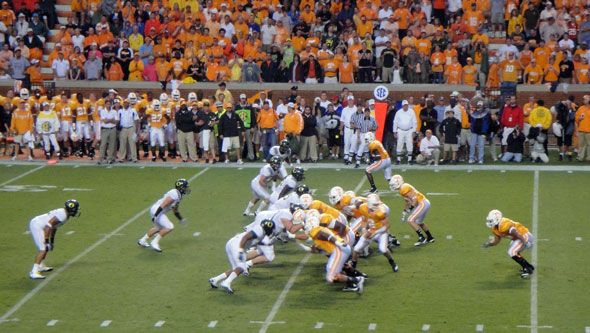 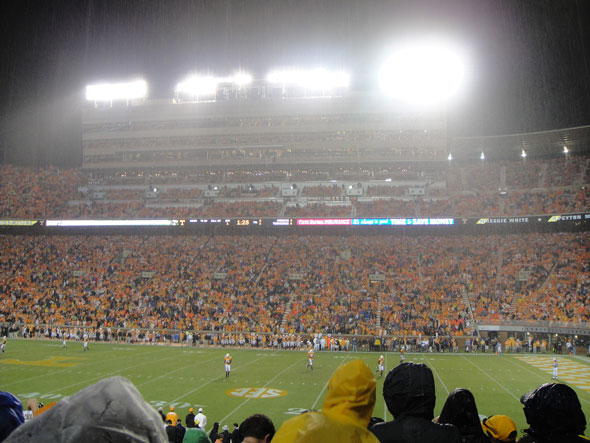 Then the skies opened. Then lightning started flashing. Then thunder. Then the officials stopped the game and cleared the field and the stands. 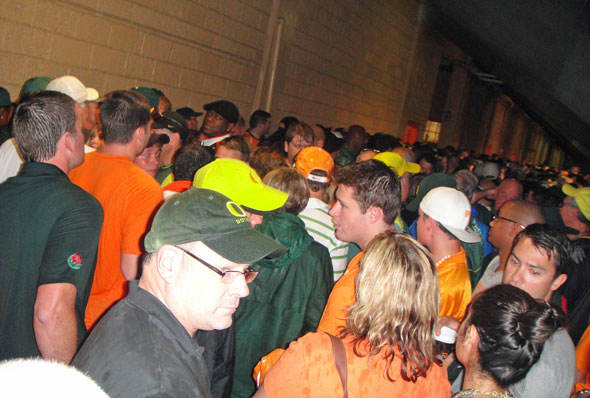 Soon, Mother Nature decided she was finished playing with us and she let the game resume. No rain for the rest of the game. 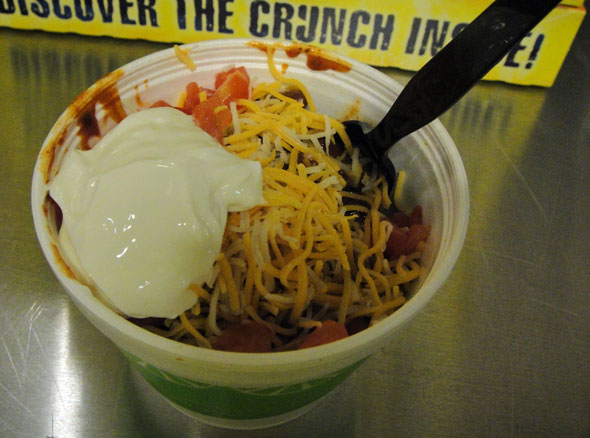 You didn't think you were going to get away with only seeing one food photo today did you? While out in the concourse, I couldn't help but notice people eating this interesting bowl of spicy goodness. It was a Premium Petros.. Not sure, but I think most folks would call it a "Frito Pie". Corn chips topped with chili, cheese, tomatoes, green onions and sour cream. Well, you just know that is going to be good. $6.50. (Woody, let's serve this at a tailgate this year.)

After the game resumed, the Volunteers had a very difficult time scoring. The Ducks did not. We intercepted. We ran-in kick-offs. We mowed over the Tennessee Volunteers in their own house.

We didn't hear a lot of On Rocky Top during the second half. 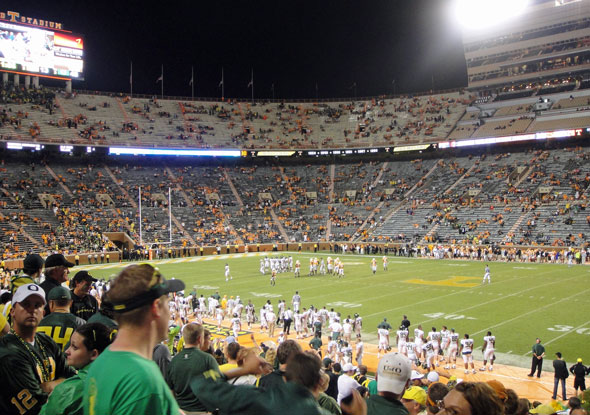 Apparently, beating the Vols at home is not polite. The Tennessee fans went home. 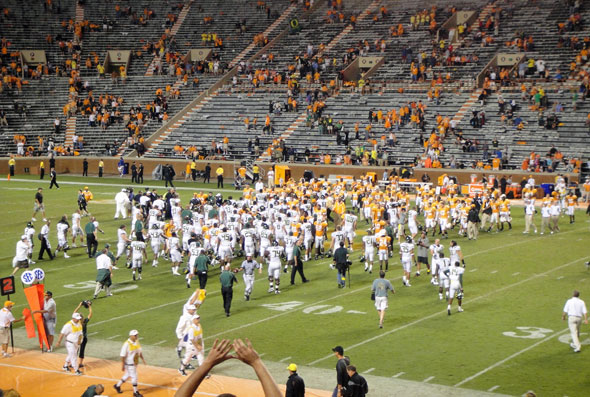 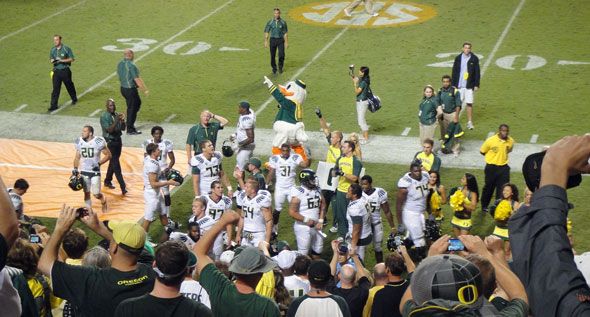 After the game, the Victorious Duck football team came over to thank their fans.

Until my next update, I remain your very pleased correspondent.
« Steve’s Day Drinking in Nashville »