Los Angeles, California: Hello, Dear Readers, from The City of Angels. DT and I drove to Los Angeles from Indio Wednesday afternoon to see the kids. Dave has a meeting in Santa Monica (track & field stuff) Friday morning, so that was a good excuse to visit our little grandson... as if we need an excuse.

We interrupted a scheduled Wednesday "date night" Lenny had planned with Lisa. We told Lenny he could cancel the sitter and we would happily stay with Leo while they went to dinner, but the Best Son-in-Law Ever invited us along. 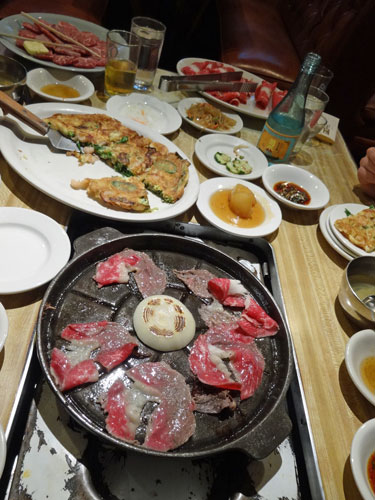 Lisa and Lenny took us to a BBQ place near downtown Los Angeles (in Korea Town) - Dong Il Jang (3455 W 8th St, Los Angeles, CA 90005, 213-383-5757). Like most Korean grill places, a fire is lit under a flat metal pan situated in the middle of a dining table and guests order different thinly-sliced beef cuts to cook theirownself. Plenty of dipping sauces and small dishes of assorted pickled vegetables arrive to accompany. We really had a good time and really ordered too much food. Though the food seemed pretty-much the same as we remembered from dining in Korea, the kimchi (pickled green vegetables, usually cabbage and bok choy-types) were not at all spicy and there was a serious lack of garlic... which seemed odd to us as most of the cliental were ethnically Korean.

We were on Leo-Duty much of today. Lenny went to work and Lisa had a Ladies Luncheon. Our morning started with breakfast with dinosaurs and a little jogging (no matter that Leo was exercising in his pajamas and basketball shoes). 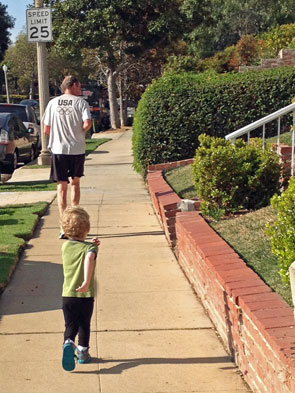 What is more fun than dancing with your shadow? 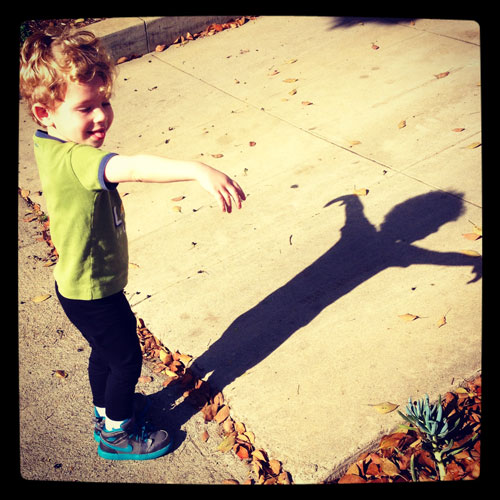 Our planned entertainment for the day was to take Leo to the carousel in Griffith Park after his morning jog. The merry-go-round is open at 11a every day.

For some reason, the metal grates were down around the carousel, so we had to switch to Plan B. 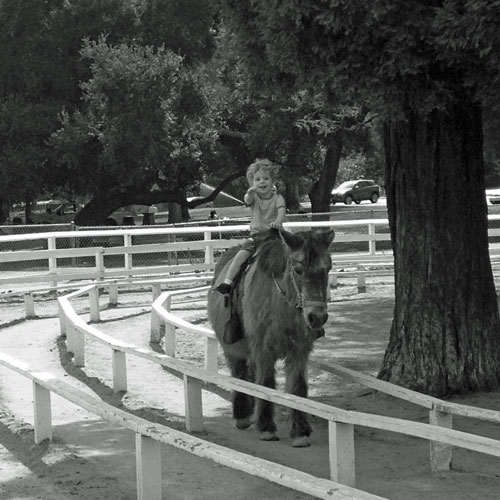 There is nothing Leo likes more than riding the sad furry $3 ponies in Griffith Park. Honestly, he goes so often the workers know him and give Leo the best sad furry pony to ride. Leo rode the ponies twice and also went on a wagon ride (cart pulled by mules). Yes, you read that right. Mules.

Too early to go home. Too early for lunch. What did the Little Dude want to do next?

Leo wanted to go play in one of his favorite parks in Griffith Park. We arrived to the playground just as a few school buses filled with field-tripping grammar-schoolers arrived. DT and I are old - it was all we could do to keep track of Leo. 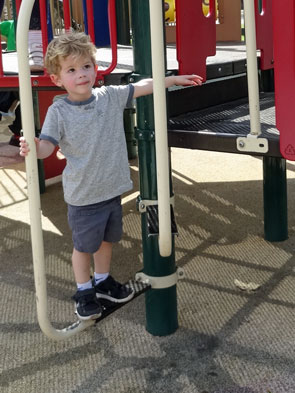 About this time, Leo starting asking for food. Leo does not say he is hungry. Leo says: I want fuuuud. Leo pronounces this word with a very heavy umlaut.

Since we were already in Griffith Park, DT and I took Leo to the cafe at the Gene Autry Museum for lunch. They have amazing American Fry Bread Chicken Tacos (and an all-beef hot dog on the kiddie menu). Our 25 pound grandson ate an entire hot dog and a ton of fries. 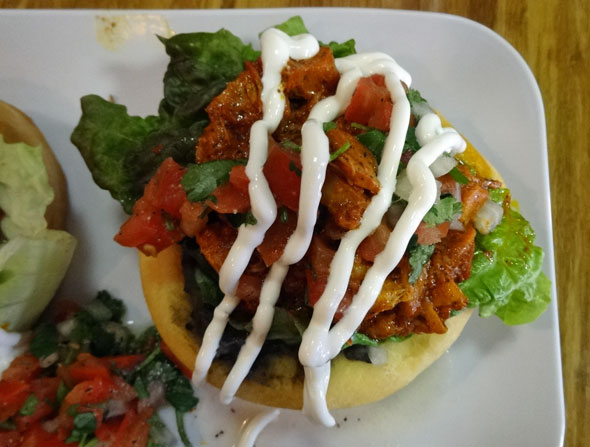 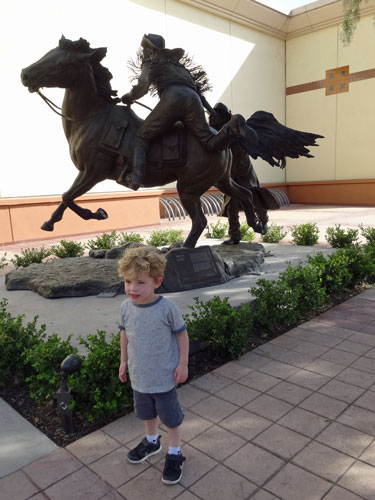 Leo with the Pony Express riders

Dave and I had an incredible day with Leo - and then we enjoyed a lovely evening with Lisa and Lenny. I cooked pasta with sun-dried tomatoes and mushrooms. Dave and Lenny did the dishes while Lisa and I gave Leo a bath and put him to bed.

SLOGGER REPORT: It is super-rare that I gather 10,000 steps on my pedometer without jogging at least three miles - but it was not a problem today.