Minneapolis, Minnesota: So many horrible things happening this week - in the middle of a pandemic. Is this a nightmare? Our phones squawked today with that scary "Amber Alert" signal, but it wasn't an Amber Alert (thankfully), but a county-wide message alerting us to a curfew beginning at 6 o'clock this evening and lasting through 6a Tuesday. We endured curfew often while living under the Marcos regime in The Philippines, but he was a dictator. (Marcos was elected President, but he was a dictator.)

Déjà vu all over again?

There was a march in Palm Desert, and a rally in Palm Springs, this afternoon. No looting, just people chanting while holding-up anti-racism signs, and condemning the death of George Floyd. Cars driving by the rally were honking in support and waving. I was quite encouraged by these images. The march in Indio had to be cancelled/postponed as it began after the new curfew.

I was up very early again to walk before it became too hot, but with a little cloud-cover, the temperatures didn't seem that brutal today.

The palm tree trimmers are still at work. This time of year, they really give the trees the equivalent to a boy's summer crew cut.

I looped all over the resort (avoiding the tree trimmers and the noisy chipper truck), walked both golf courses, and returned to find I had only walked 9820 steps. Did I keep going to click-off 10000 steps? No I did not... but with walking around the bus and our campsite, and an after-dinner stroll with DT, I finished my day over 12000 steps. Since I am so short, this is only five miles. Shouldn't I get extra-credit or something? 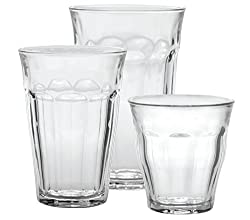 The only excitement on lot #322 today was a new set of drinking glasses were delivered. We have carried the same set of glasses through three motorhomes over 20+ years, but were down to two tall (ice tea?) glasses, 3 water glasses and 2 juice glasses. Time to restock. I ordered the same set from Duralex that we have used for the past two decades. Wow, are they new and shiny. Hope they last as long as the previous set.

Dinner was mostly prepped yesterday morning when I sliced the needed-to-be-used bell peppers for omelets. As long as I was chopping, I just kept chopping and slicing, until a nice big bowl of peppers, red onion, and garlic were ready to saute with two sliced small Italian sausage links (which the Instacart shopper brought by mistake - but we loved them). I boiled one cup of penne (plenty for the two of us), and re-hydrated a handful of sun-dried tomatoes from Sister Gina. Everything was tossed together and garnished with shredded Parmesan cheese and fresh basil. Great, easy meal. Served with a butter lettuce salad.

Until my next update, I remain, your hopeful correspondent.