Yes, We Have No Tacos

Portland, Oregon:  In June I bought three tickets to the Portland Taco Festival and noticed last week the date marked on my calendar for this Saturday. I rooted around my very untidy desk and located the tickets. I was anxious to taste yummy tacos and take a lot of photos for this little blog.

Originally I had purchased the third ticket thinking my sister would join us, but Renee was out of town. Mary was single this weekend, with Steve busy at the Portland-to-Coast walk, so she agreed to meet us at the festival grounds - held on the infield of a horse racing track, Portland Meadows - early Saturday afternoon. The taco festival was set to run from noon until 8p, Saturday and Sunday.

Hold on to your sombrero, Dear Reader, this taco festival was a bust. First, the traffic was awful. Just awful. Cars were streaming away from the massive parking lot. Cars approaching the festival were questioned before entering the parking lot. When we finally reached the parking attendant, we learned the festival was SOLD OUT, so only people with pre-purchased tickets were allowed into the parking lot. They waived us in, charged us $10 to park, we found a parking spot, and met up with Mary who had arrived via Uber.

As we approached the gate to the entrance/infield, we were greeted by an angry mob exiting the festival. They were shouting and warning us "don't go inside" as there were no tacos, booths were sold out of food, long lines for booze... etc. One man shouted: Let's bring this fight to social media!

There I stood, feeling a bit vulnerable, a bit middle-aged, and a bit ridiculous in my voluminous Fiesta skirt. We now understood why hundreds of cars were leaving the festival only an hour or two after the gates had opened: the Portland Taco Festival was a failure. There would be no tacos. No Lucha Libre Wrestling. No Chihuahua Beauty Contest.

To the right of the entrance gate, another unruly group had gathered in front of the ticketing tent. They were not purchasing tickets, but demanding refunds, and were not in a good mood. No doubt they were royally irked, probably stressed (as we were) from the traffic/parking situation, and hungry.

We stood in the refund line for a bit, but listening to the crowd and the people working behind the booth, decided this was going to get ugly and heard refunds would only be issued to people who had paid with cash. Hmmm. It was not worth it to me to stand in the hot sun with a few hundred angry people, when I knew my credit card company would do the fighting for me.

We were totally ripped-off on the $10 parking fee.

These three amigos decided to hit the highway and find tacos elsewhere... but, of course, every nearby NE Portland taco shop had lines streaming out the door... hundreds of ticked-off taco festival goers having the same great idea.

No matter, we found a table at The Rogue Brewery downtown Portland. Not a taco joint, but they made me a margarita. 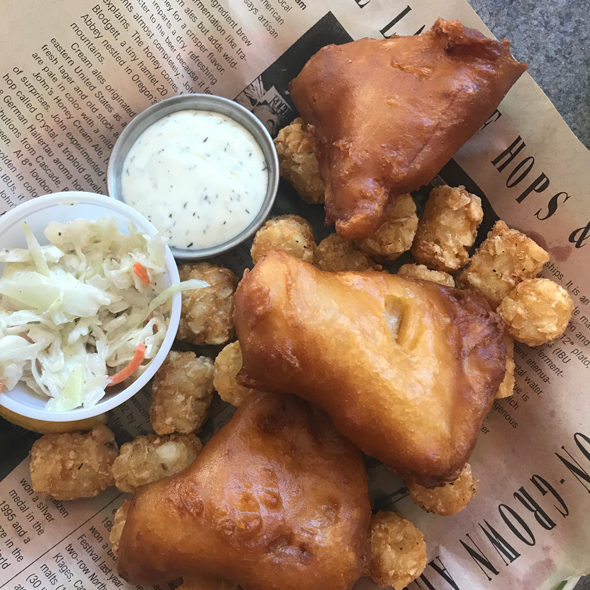 I had purchased three $60 VIP tickets, and have filed a claim with American Express. Saturday and Sunday, the local television stations, social media, and newspapers were all over the Taco Festival Epic Fail. After the bad press, organizers cancelled the Sunday event, but have stated they will only be issuing refunds to patrons who purchased tickets to the Sunday event. We later learned there were only five taco carts inside the festival grounds, with over 3,000 tickets sold for each day of the taco festival. Five? No wonder they ran out of food and/or the lines were two-hours for a taco. In Portland, you can't throw a rock without hitting five taco trucks. Poor planning, terrible organization. Epic Fail is correct.

No tacos for us Saturday. Sunday is pizza night, and I had planned a fig & goat cheese number, topped with arugula. 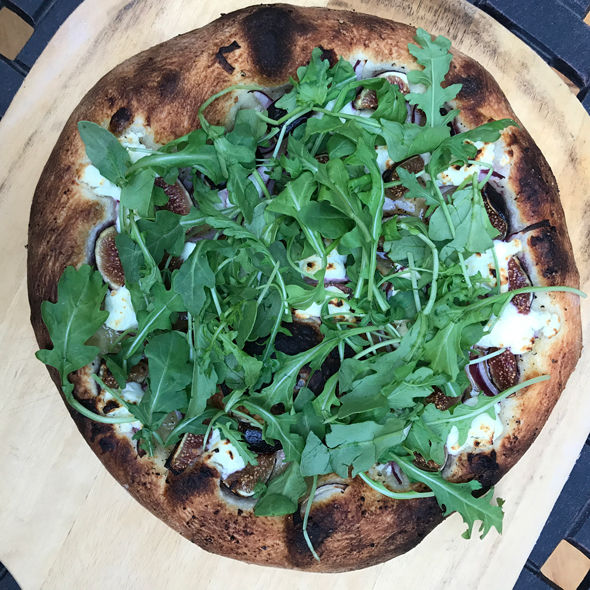 It was a very nice pizza. No one demanded a refund.

I'm not the only one in our family in traditional dress of foreign lands. Here is Lucy posing on her front porch on "International Day" at school. Dave and I bought this qipao (pronounced chee-pow) for Lucy in Beijing two years ago. It finally fits our mighty 25 pound three year old. 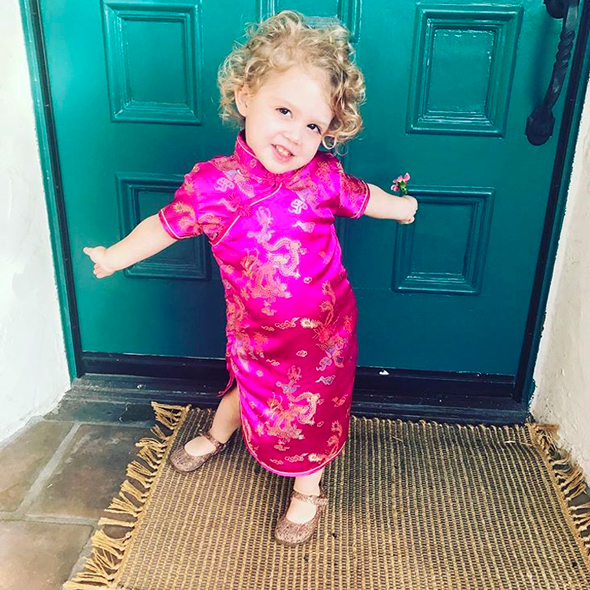 My fiesta skirt has an elastic waist band.

Until my next update, I remain, your tacoless correspondent.
« Eclipse Europe 2017: Hotels »