Wild Horse Crossing Lake State Park, Nevada: We woke to clouds and decided to hit the road. Little did we know what was going to greet us just west of Salt Lake City as we traveled on I-80.

This, which I shall call the "before" photo: 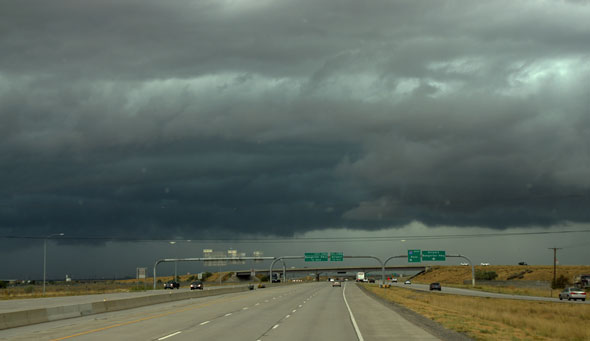 Lightning and thunder shook the sky. The rain fell so hard, traffic was forced to slow to 40mph. It was dark. It was impossible for the wipers to keep the window clear. I'm sure you have all had this terrible experience - so frightening!

This is about the time the refrigerator door flew open. If you are not a follower of RVGoddess.com on facebook, you probably missed the excitement last week when the safety latch failed on the refrigerator (an Amana double-door all-electric) and the door flew open (and slammed shut) as we approached West Yellowstone, Montana. It was determined at the time we had too much weight in the door. Specifically bottles of wine, in a door bin most-likely designed to hold a few gallon jugs of milk. DT had a spare latch and it was replaced. Just in case, I reorganized the contents and have been swilling-down all that wine, you know, to lighten the load. (I am such a martyr.)

Back to my tale of driving in a storm with an open refrigerator door... this series of events caused me to leave the safety of my seat belt in the middle of a terrible storm. For some reason, the fruit bin drawer had also been thrown open and thankfully too, as a bottle of French Rosé had fallen into the fruit bin. Better to have a few bruised grapes than a broken bottle of wine! However, the newly-purchased Sicilian olives were sacrificed. The little plastic deli carton where the olives had been residing was on the floor and thirty expensive olives were rolling all over the floor. A few even went under the slide room and there is the possibility that a few will never been seen again. The rest are in the trash. I think I cried.

I used a paper towel to clean up the mess as best I could, rearranged a few things in the fridge and went back to my seat and strapped myself in for the rest of the stormy ride.

Which is why you will not see a "during" photo. I was busy. 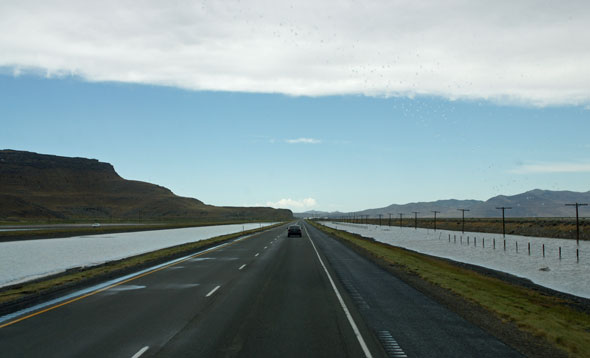 Here is the "after" photo. Flooding on both sides of I-80. Sadly, we also saw an over-turned sedan and several police cars. Be careful out there people.

Finally, there was a "scenic vista" turnout and we were able to stop and access the damage. Olive brine all over the slide-room carpet. Yuck. That is going to be a chore to clean. While I was down on my hands and knees again, looking under the slide room for stray olives, I suddenly noticed a bottle of King Estate Pinot Gris that had landed on the soft carpet under my desk - directly across from the fridge! Obviously a divine sign to drink more wine!

We stopped for a lunch break at a rest area at the Bonneville Salt Flats. 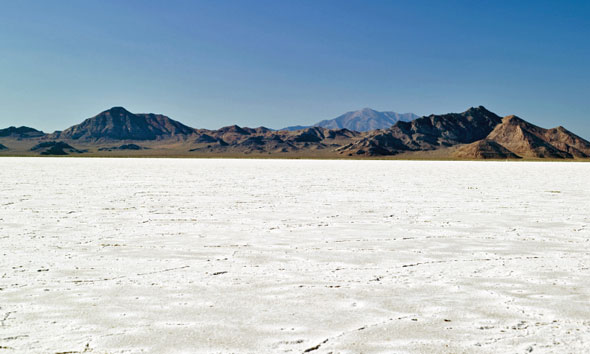 I don't think they were in a motorhome.

We stopped for fuel in Elko and were thinking of calling it a day, but then decided to continue another 70 miles for peaceful lake-side camping at Wild Horse Crossing Reservoir. After traveling over 300 miles today, we found a nice (nearly level) campsite on the lake! 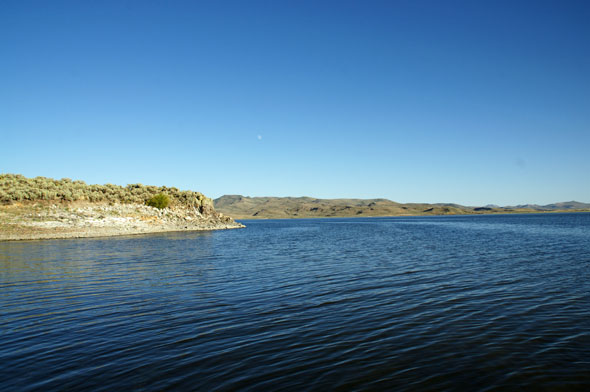 Our view of the lake 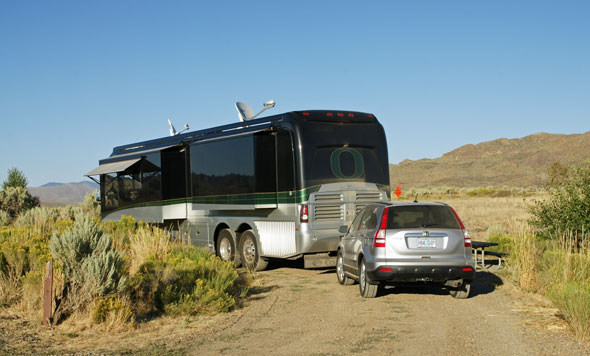 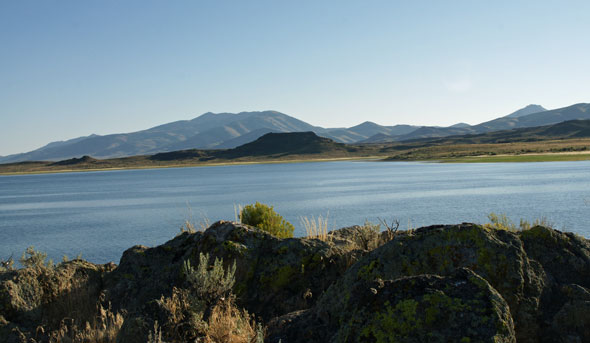 Dam Facts: The dam was constructed in 1937 to collect snowmelt for the agricultural needs on the Duck Valley Indian Reservation. The dam proved too weak, so a new dam was constructed in 1969. The new dam brought the spillway elevation to 6,200 feet and stores 73,500 acre feet of water. The water leaving Wild Horse Crossing Lake flows into the Owyhee River, then into the Snake River and then into the Columbia and empties into the Pacific Ocean... meaning this water flows right through Portland, Oregon!

I dipped my toes in the lake - icy cold!

After we settled-in, DT took my camera out for a photo safari: 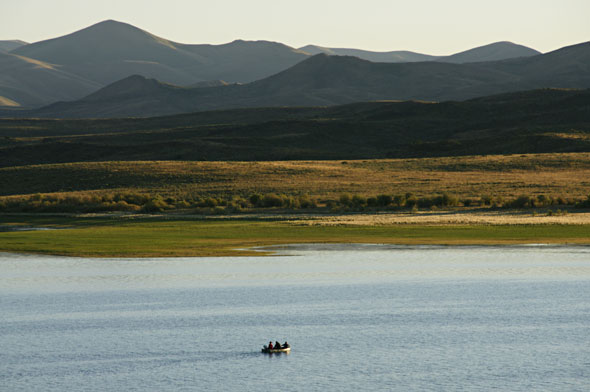 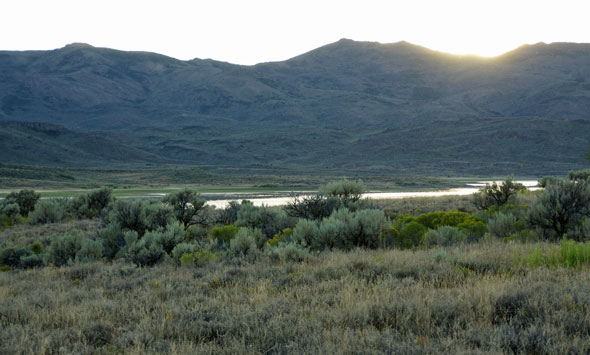 Then he returned to me and used his skills for a much more worthwhile cause - the refrigerator door: 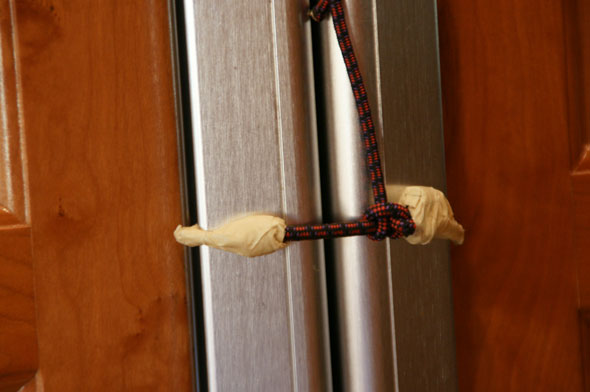 Is there no end to his skills?

Last night before I went to bed, I browned two lamb shanks and put them in the crockpot along with a chopped onion, several cloves of chopped garlic, chicken stock, a can of diced tomatoes, lots of black pepper and a big glug of DT's favorite red wine. (Sorry, honey.) I threw in two big spring of fresh rosemary and refrigerated it all overnight. All day it has been stewing in the crockpot in the sink. Tonight, I made a bit of polenta and stirred-in a little freshly-grated parmesan cheese just before serving. I bet we are the only campers dining on organically-raised lamb shanks over polenta in this campground. That was not meant to sound smug - everyone else is dining on fresh trout. Dang.

Until my next update, I remain, your trout-deprived correspondent.