Indio, California:  Dave and I have had a very busy few days. We have planned our return route back to Oregon and are making lists of tasks and errands required before our departure. 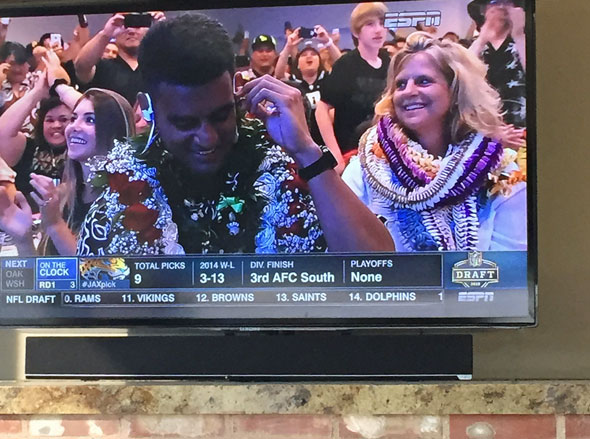 Marcus Mariota (with his Mom in Honolulu) learns his fate

Thursday evening we watched Oregon alum Marcus Mariota be sold drafted to the Tennessee Titans. He was picked second, after some other guy. 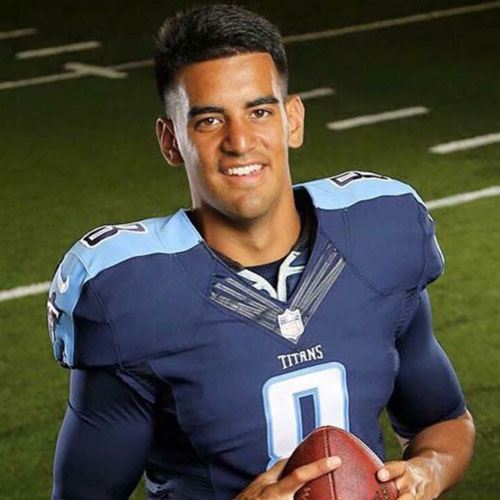 Mr. Mariota immediately hopped a flight to Nashville, posed for this photo (he remains #8) and then somehow was in Oregon to watch the Oregon Duck spring football scrimmage on Saturday. Congratulations, Marcus and congratulations to the Tennessee Titans for a smart pick.

All season, I have been promising Brent that I would make him short ribs and that I would make him balsamic "caviar". Finally, we found a date that worked. Unfortunately it was a date where the temperatures climbed to 102°... which isn't exactly braised short rib weather... but what the heck. Brent, Crystal, Tom and Bill joined us for dinner. 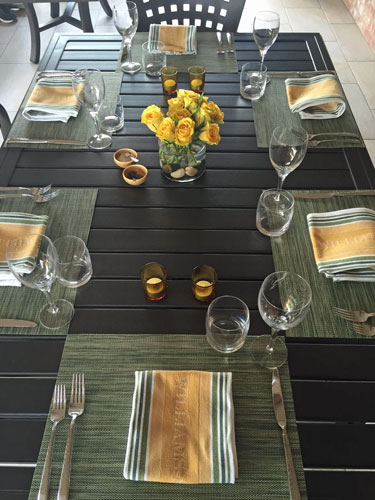 Thank goodness we have an outdoor kitchen at our campsite in Indio. By the time the sun sets behind the mountains, the temperature drops rapidly. 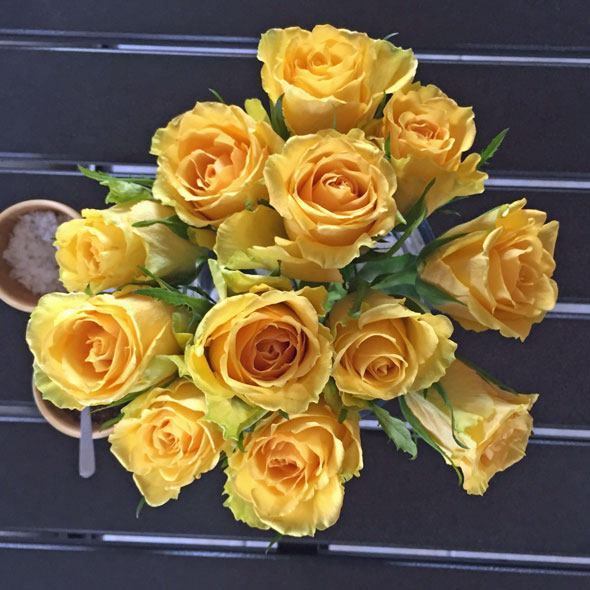 Yellow roses on the dining table - one last nod to Marcus Mariota. 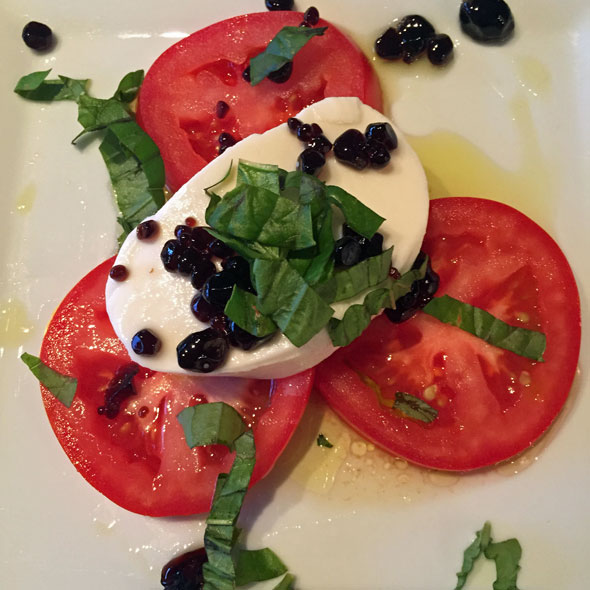 I gleaned ideas from several recipes to make the balsamic caviar (sometimes called pearls). They are just teeny little balls of balsamic Jello. I put about 1.5 cups of grape seed oil in a tall clear measuring cup and set it in the freezer for an hour. Then I brought 3/4 cup of balsamic vinegar to a gentle boil in a small saucepan, stirred in 1.5 teaspoons unflavored gelatin powder and let it simmer for a minute. Then I transferred the hot vinegar to a bowl, so it could cool naturally, but quickly. When cooled, I poured the vinegar to a squeeze bottle (that Brent had found for me). The vinegar was carefully dropped into the icy-cold oil and as the droplets slowly fell to the bottom of the measuring cup (think lava lamp!) the balsamic vinegar chilled and formed adorable little "caviar" balls. Strained through a wire mesh colander, the gelatin balls really do resemble caviar. It only took a few moments of "work" (more like "scientific experiment") and resulted in a pretty - and different - way to serve balsamic vinegar on a Caprese Salad. I infused a little basil (from our garden) in olive oil as the base on the plate. 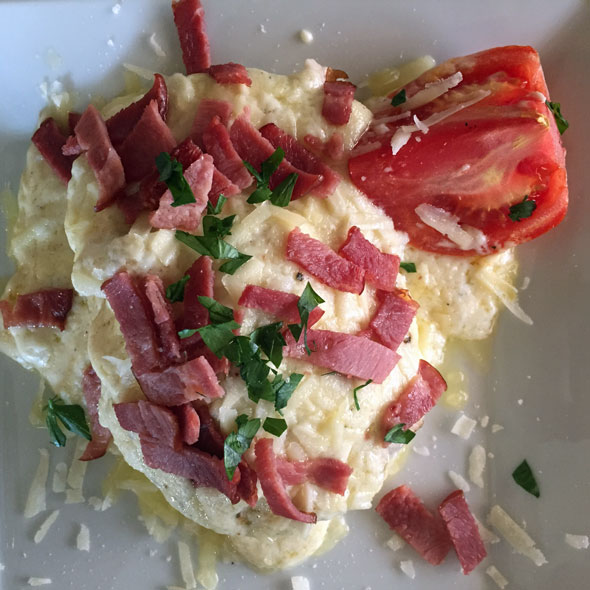 Derby Day was celebrated with Hot Browns (made with turkey bacon because that's how we roll), using the recipe from The Brown Hotel in Louisville. Good thing we had this heavy late lunch, because we never did have dinner...

Because... it was determined that Dave and I would order the Mayweather-Pacquiao boxing match for our fellow campers because we have the technology (i.e., me) and a large enough space to hold a dozen or so folks. Everyone would chip-in. Well... I was ready to rescind my Mrs. Technology 2015 crown. I could not order the fight via DirecTV. Usually I simply order a movie or pay-per-view event with my cell phone and the purchase instantaneously appears on our TV screen.

Not Saturday night. I could not reach DirecTV with a telephone call. Could not order via the remote control. Could not order via my iPhone. Then ESPN (and twitter) reported there was some sort of technology snafu and no one was able to order the fight. Our friends were on-hold while I kept trying. So frustrating. About 45 minutes before kick-off, DirecTV suddenly sprang-back to life and we were good to go. I sent out text messages and DT hopped in the golf cart to hit the street as a town crier. While not a fan of watching two men punch the crap out of each other, I recognize boxing as an ancient sport, requiring discipline and skill... mostly, I just wanted to cheer for a Filipino. (Don't forget, The Lovely Lisa was born in The Philippines.) 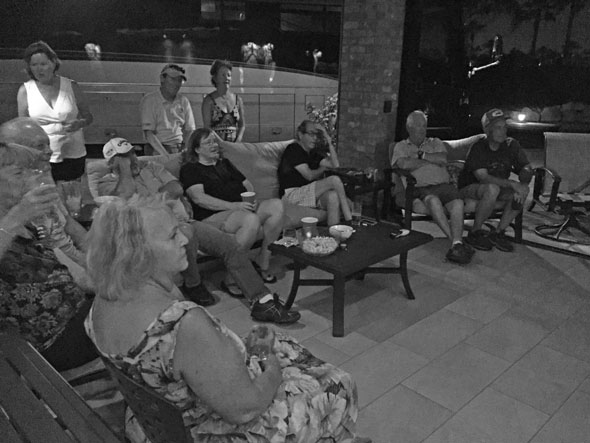 Honestly, most of us are usually in bed by the time the Main Event started. Late night at Lot #322.

Colleen and Rick were able to get their slide-rooms in a few days ago (needed new batteries). They are already back in Canada. Brent and Crystal have left for Texas. Every day our resort feels less-occupied. The restaurant/bar will close for the season next week. 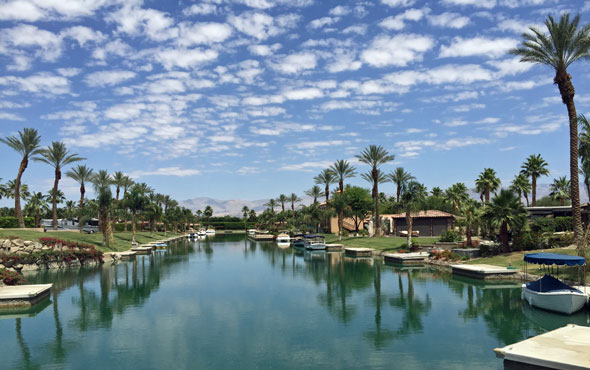 I'm going to miss this view 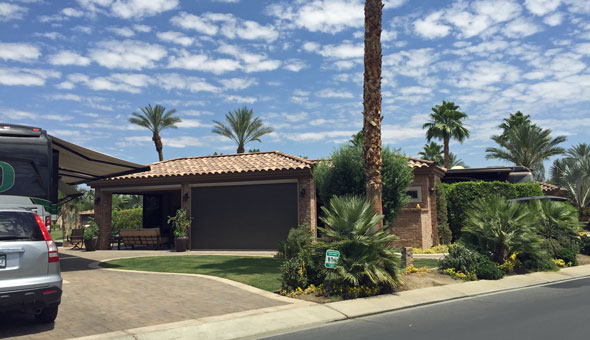 When the pansies die - it's time to leave 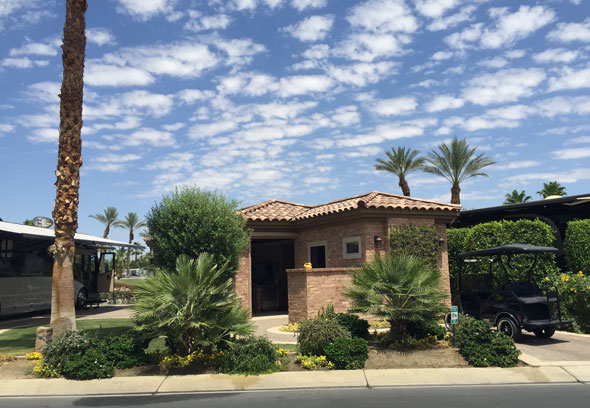 The pansies may be dead (and slowly being removed), but the tomatoes are going strong. Dilemma.

About our departure: I am sad to announce we will leave our idyllic SoCal campsite on Tuesday, 12 May. (Do you hear somber violin music playing in the back of your brain? I do.)

Until my next update, I remain, your sad correspondent.