Indio, California:  We had a very busy week. The Magna Peregrinus received her annual coat of wax and was professionally cleaned inside as well. Dave has several doctor appointments each week and is finally feeling a bit of improvement. The pain is lessening. He still can't walk far and jogging is definitely not on the agenda. Yet.

Meanwhile, back at the ranch... 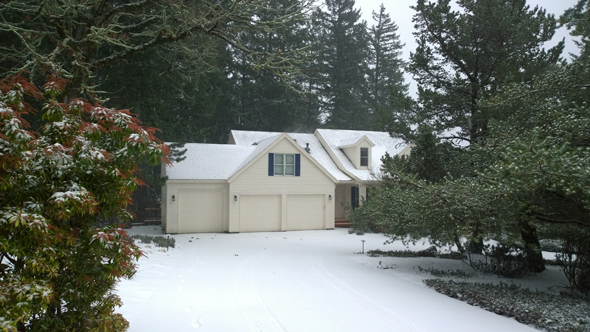 Our house sitter is having to use Dave's 4-wheel-drive Tahoe if she wants to leave our house. The snow wasn't much, but Portland suffered through another nasty ice storm. 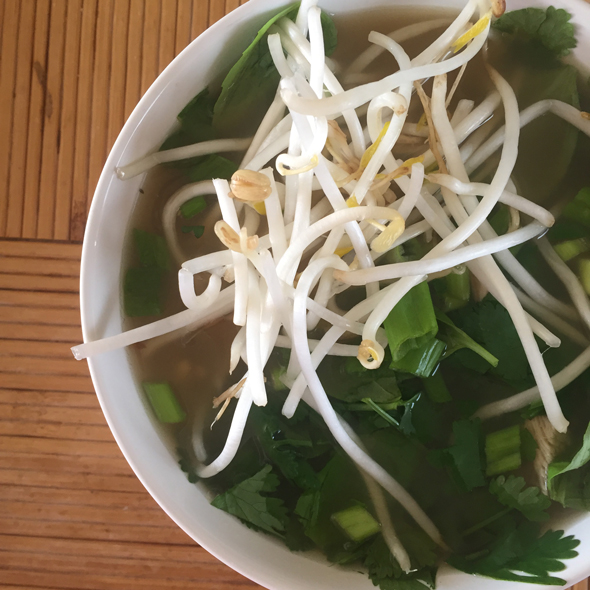 The weather back home warranted a nice hot soup, so I made Pho Ga. That hit the spot. It was only 74 degrees here.

It took a little planning, but three of Dad's kids (actually every-other kid!) were able to get to Yuma to spend the weekend together with Dad and Mary in their winter home. Renee (#3) flew from Portland to Phoenix. I will not dwell on the FIVE hours she sat in the plane at the gate due to the terrible Portland snow and ice storm. Somehow Renee still made it to Phoenix in time to meet up with Steve (#5, who had flown to Phoenix from his home in Denver), where they caught a puddle-jumper to Yuma. Dave and I (#1) drove 3.5 hours to Yuma for a three-night stay. 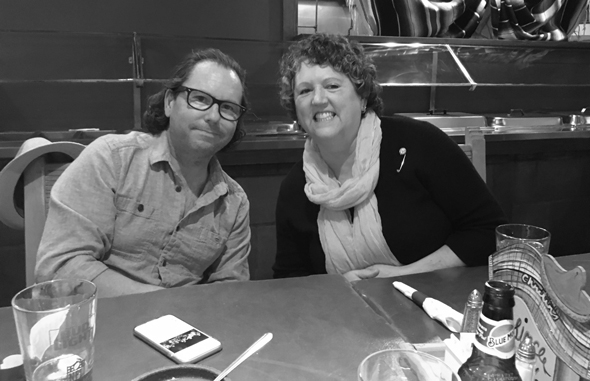 We met up at Chretin's Mexican Restaurant in Yuma. Pronounced Chit-eens, this place is so old - Dave's Dad used to eat here when he was in the Air Force. After dinner, Dad went home and his every-other checked into a nearby motel.

Saturday morning we all went to Dad and Mary's. Their resort was hosting a craft fair. Mary was on the fair committee, and was running-around all morning. We'd catch a glimpse of her occasionally, scurrying by. We all did a little shopping and sat outside in the warm sunshine listening to live folk music. The singers were very good!

When Mary's volunteer shift was over, we all went downtown to have lunch at Prison Hill Brewing Company. (For those not "in the know" about Yuma, it is site of a Territorial Prison, which operated from 1876 to 1909. We visited the restored historical site in 2009; click here to see photos. The Yuma High mascot are the Prisoners. It's a theme-thing, and Prison Hill Brewing jumped on that band wagon.) After lunch we did a walking tour of the historic downtown area and later attended the annual holiday light parade. 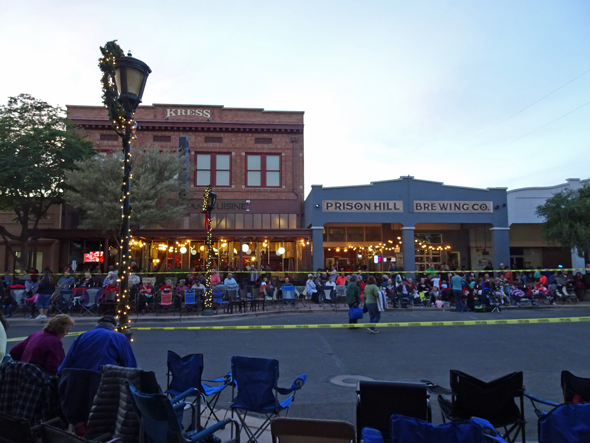 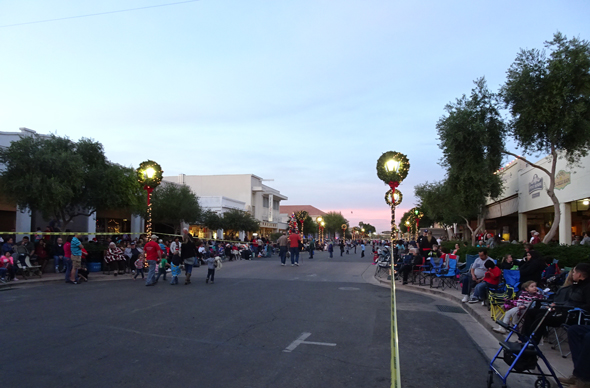 Ready for the parade

The parade was fun. Nothing fancy. Organizations and companies - and the power company - cover their vehicles with holiday lights and drive a route that couldn't have been a mile long. There must have been six marching bands and every single band was fantastic - they even had electric lights on their uniforms and instruments. Impressive. 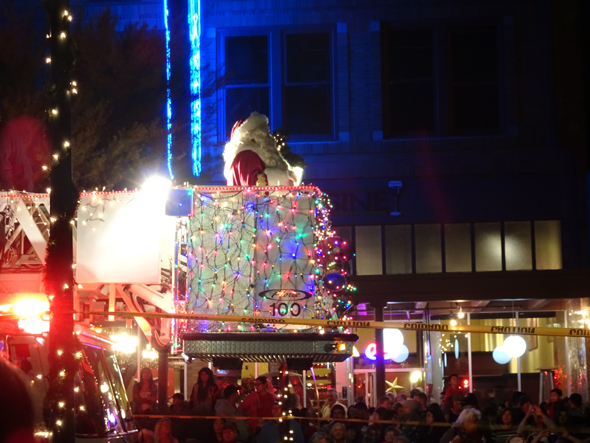 But you know the parade is over when Santa arrives on the last float. (In Yuma, he arrives in a basket of a lift truck.)

Sunday, we went to Mexico! Doesn't that sound exotic? It isn't. On Sunday we walked across the border to Los Algodonas for a look-around. Dave and I had not been there for years. The entire town seems to serve the purpose of performing dental work on foreign tourists, making their prescription lenses and selling pharmaceuticals without a prescription. It was pretty quiet on this Sunday and we didn't have a wait back at the immigration/passport checking booths. 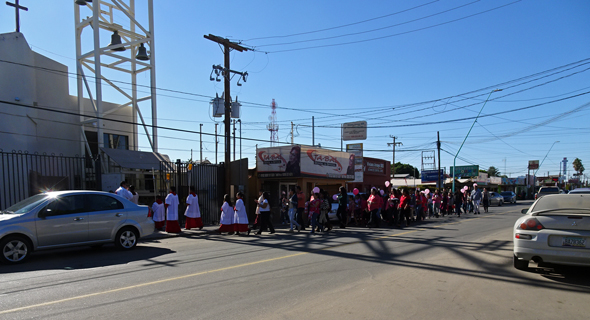 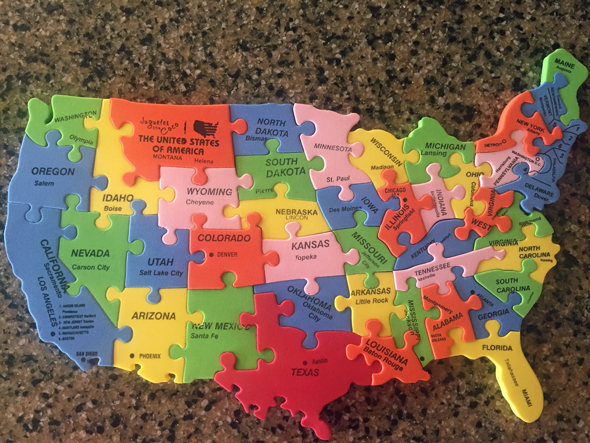 We even bought a bit of touristy junk. I saw this cute foam map for the kids. The vendor said he would sell it to me for $4. Renee had the brilliant idea to switch Oregon and California to the color blue for the recent election results. We borrowed a blue California and Oregon from other puzzles, reconfigured everything and were happy with the result. The owner was laughing with us (maybe he is not in favor of a wall?) and when we were finished, jokingly told us the price was now $20. Dave gave him five dollars and everyone was happy. The kids have a cool(though we will admit, not exactly geographically accurate) US map puzzle and we have a fun memory.

It's okay if Leo and Lucy think Detroit is in New York, right?

On Sunday evening we had a very nice meal on the outdoor patio of The River City Grill - a restaurant we have enjoyed previously - owned by fellow Oregonians. 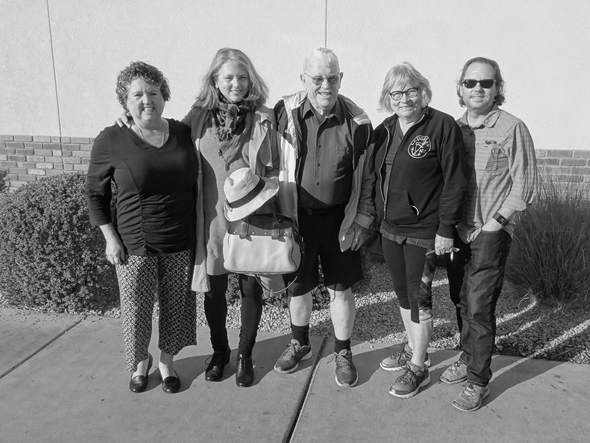 So here we are (except for My Driver/photographer!) on Monday morning before we all went our separate ways. We all had a great time, good fun, good meals and are all caught-up. Dave and I have returned to Indio and my siblings are safely back to their homes.

Until my next update, I remain, your Big Sister correspondent.