Portland, Oregon:  I have been struggling to produce a decent Cream of Tomato Soup. My Poor Driver has had to suffer through three failed attempts, citing they taste like pasta sauce... and he looks around for some noodles.

I know it is possible to simply pick up a can of Campbell's Cream of Tomato Soup at the grocer, but you know that isn't an option around here: INGREDIENTS: WATER, TOMATO PASTE, HIGH FRUCTOSE CORN SYRUP, WHEAT FLOUR, WATER, CONTAINS LESS THAN 2% OF: SALT, POTASSIUM CHLORIDE, FLAVORING, CITRIC ACID, LOWER SODIUM NATURAL SEA SALT, ASCORBIC ACID (VITAMIN C), MONOPOTASSIUM PHOSPHATE, CELERY EXTRACT - so I will continue-on with the quest.

In the meantime, I found another (not creamy) tomato soup recipe on the New York Times cooking site, Pureed Tomato and Red Pepper Soup, which had excellent reviews. Thursday is Soup Day at Taylor Manor. 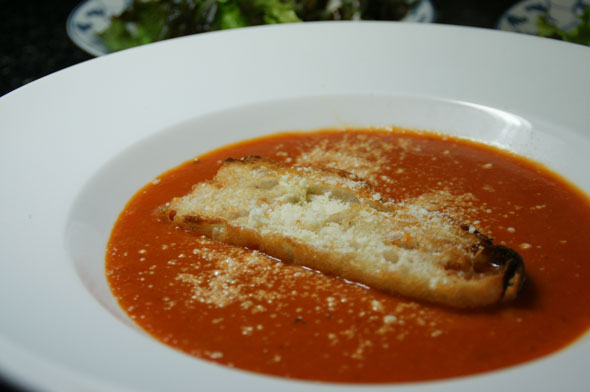 I gave it a whirl. Pun intended.

And, for me, I actually pretty-much followed the directions, omitting the sugar (it was optional and only 1/2 teaspoon) and cinnamon (just sounded weird) and used one quart of chicken stock and two cups of water instead of the vegetable stock. After reading the comments from other cooks who had prepared the soup, I opted for regular old long-grain white rice instead of arborio (the rice used in risotto). A few people felt it took the arborio too long to cook.

The soup was just delicious. We both really slurped it up!

The recipe, as written on the New York Times website, is super-healthy and vegan if not garnished with cheese. It is also gluten-free as it is thickened with rice, not flour. I used my hand-held stick blender directly in the pot of soup. No mess. No transferring hot soup to a blender. 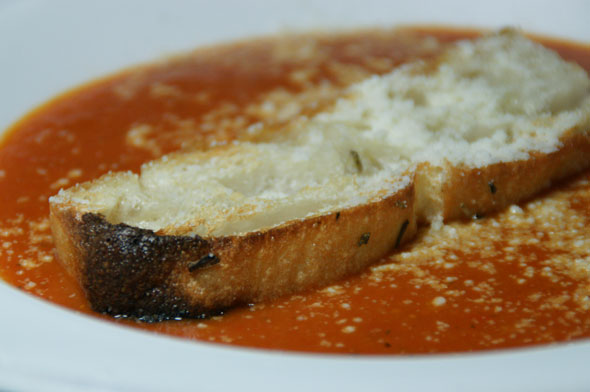 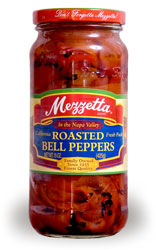 I served the pureed soup with a slice of toasted rosemary Focaccia and a sprinkling of Parmesan cheese. The only negative thing about the recipe - which turned-out to be a positive - is that it made a huge pot of soup. Enough for our dinner and two quarts for the freezer. The six servings suggested by the recipe must be referring to six very hungry people.

And though I did take the time to char/roast two red bell peppers, this recipe would not suffer from using purchased roasted peppers.

I will make this soup again. Until then, the cream of tomato soup mission continues. Please leave a comment below if you know of a good recipe. But try this recipe!

Have a great weekend... and let's see if the Ducks can beat the Washington State Cougars in Pullman this weekend. (We will be at home; watching on television.) Come on, Ducks, it's the Cougars. Don't Coug-it!

Until my next update, I remain, your pureed correspondent.

« A Week Went By… Weekend Roundup »