Manila, Philippines:  Our plan for the day was to visit the historical original walled city of Manila, Intramuros. We have both visited this area many times, but it had been obviously quite a while - and it is literally across the street from our hotel.

We left the hotel, crossed the street and were following the path to Intramuros, when two little street urchins began following us, asking for money. We said no and continued along our way. Then one of the little boys (I'd bet they were both under 10 years old) grabbed my bottom. Then he grabbed my bottom again. I know the drill. One of the boys will grab or poke, and as you turn to confront him, the other one will go for your wallet or purse or shopping bag or anything else they can steal. This was an extremely bold move, considering there were two of us and one of us was a six foot tall man. Cheeky? No. These little shits were thieves, plain and simple. When I told him to leave me alone (the kids spoke English), he ran towards me and tried to grab an earring right out of my ear. I pushed him away. Then he came at me, jumped up on my back and tried to rip the necklace from my neck! This is when I whacked him with my elbow and sent him flying. Where was DT? Why wasn't he protecting his beloved wife? Dave was fending off the other little turd, who had picked up a long tree branch (think javelin) and was charging him with the point, jamming the stick into Dave's thigh. We were under attack by two 50 pound thugs.

During this entire unpleasantly, we had continued walking at a very brisk pace. There was an entrance gate (to an office or something) ahead of us and an entrance gate in The Philippines always means the presence of an armed guard. We were smart to keep moving and the armed guard did come to our defense, yelling at the boys (I wonder if he has to do this all dang day?). At the same time the guard was yelling at the boys, a bus stopped and unloaded a large group of college students. The students seemed to just envelop us so the little pickpockets had to scramble. The students were sweet and laughed and told us they would not rob us or hit us with with tree branches. As we disappeared into the crowd of young students, the little thieves yelled back to Dave, "F**k you, man. F**k you, man. F**k you, man." Adorable children.

All the time we lived here in the 1980's, we were never bothered like this. Though constantly asked for money from street boys, after we said no, they left us alone - and I always wore jewelry (and carried a handbag, shopping and usually a baby) then too. I certainly never had anyone climb on my back or try to rip an earring out of my ear. Maybe we seem more vulnerable now that we are older? Gotta hand it to the little punks, they had prime real estate staked out. Not a lot of poor (or young) tourists walking between the fancy Manila Hotel and Intramuros.

Back in the day, when we would park our car in front of a restaurant, shop or tourist attraction, a little guy (8-10 years old) would ask if he could watch our car for us while we were inside dining. If we said no, he would go into a very serious acting job to make sure we knew he was starving and he was just trying to earn a little cash for food. The kid could be on Broadway. The belly would be rubbed. A sad face would be produced. Please, Mom, I'm soooo hungry, but he was always smiling. Truth is, this whole parking lot "watching" plan was a huge racket. We'd give the boy a peso or two after leaving the restaurant and our car was in the same condition as when we left it under his care. (I mean: not scratched, all four tires still there and filled with air, windows intact and the car has not been broken into, nor had the fuel tank siphoned dry.) But the kid did not get to keep the peso. As soon as it reached his hand, an older boy would take it and leave him with only a few centavos. The older boy would take the peso to another guy... and then another guy and probably someone somewhere is sitting in a mansion, built by pesos earned by eight year old boys in parking lots. Not willing to risk having our car damaged while we dined, we paid the "fee" and to get into the good graces of the parking lot boys at our favorite restaurants, we learned to order six chicken legs or a few sandwiches "to go" and distributed them as we retrieved our untouched car. I didn't know where he slept, but I knew his belly was full. 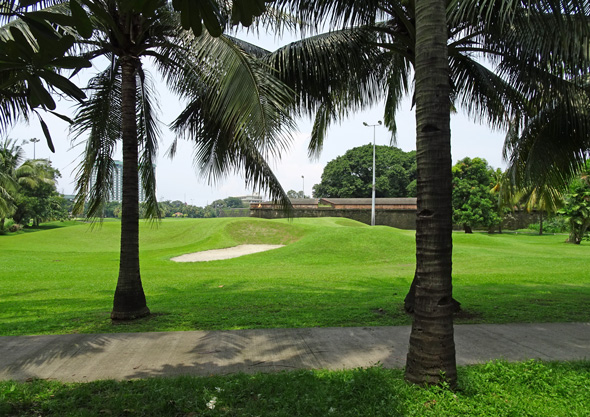 Intramuros: a golf course inside the walls. Our hotel is behind the palm tree on the left
and part of the wall is visible between the two palm trees.

After reaching the inside of the walled city, the accosting did not stop. We were approached by men who promised to give us the best tour of the walled city. By bicycle cart. By horse-drawn cart. On foot. We said no. We said no. We said no. One guy followed us for about five blocks, even though we ignored him the entire time. Maybe he hoped we would just give-in because it was 95 degrees? (These guys really need to learn to ask tourists if they are wearing pedometers; fitbit wearers never want a ride, we want steps.) Other than being attacked by toddlers and hustlers, and it being hotter than Ghana, we had a great day in the walled city. 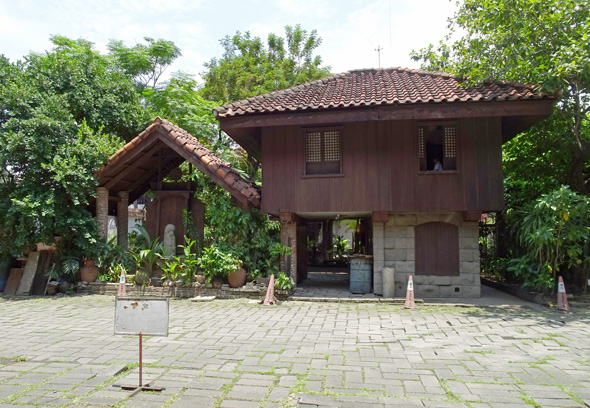 An example of a traditional Filipino house 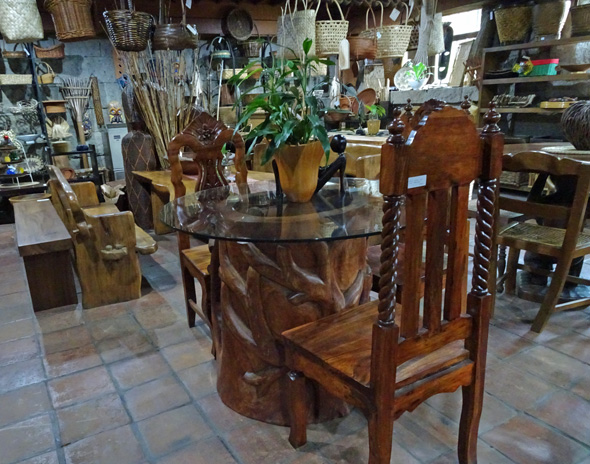 Intramuros has several beautiful Filipino handicraft stores and a few featuring traditional crafts from indigenous tribes throughout the 7000 islands of The Philippines. Filipinos are amazing carvers, furniture makers, wood workers, weavers, beaders and embroiderers. Do you think even one of them carried smocked/embroidered baby dresses? No. Not even one. Dave is pretty sure I will finally find what I am looking for at the Manila Airport gift shop. I hope so. 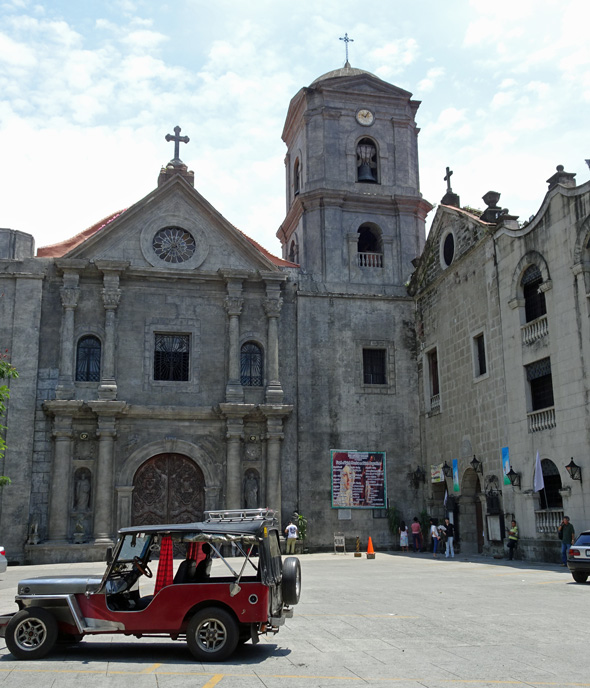 First stop on our self-guided tour was St. Augustin Church, built in 1859. (In case you do not know, The Philippines and Mexico have very much in common. About the same time, the Spanish "settled" in both countries, bringing their language, culture, food, religion and architecture to the indigenous people. The Spaniards ruled in both countries for about 400 years. Just like in Mexico, Filipinos are named Herrera and Ruiz, and the main religion is Catholicism.) 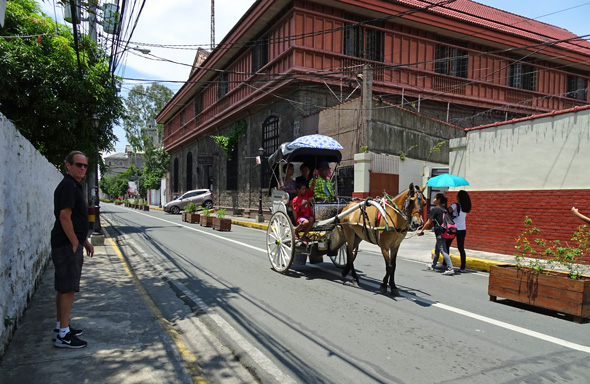 The next church visited was the beautiful Manila Cathedral, built in 1571 and still serves as head of the Archdiocese of The Philippines. One of the most famous clerical figures in the country was the ironically named Cardinal Sin, a Chinese-Filipino. Jaime Sin was hugely popular and loved by his people. Cardinal Sin was active in local politics and was instrumental in helping Corazon Aquino take power over Ferdinand Macros in 1986. Sin's funeral mass was read in the Manila Cathedral in 2005. 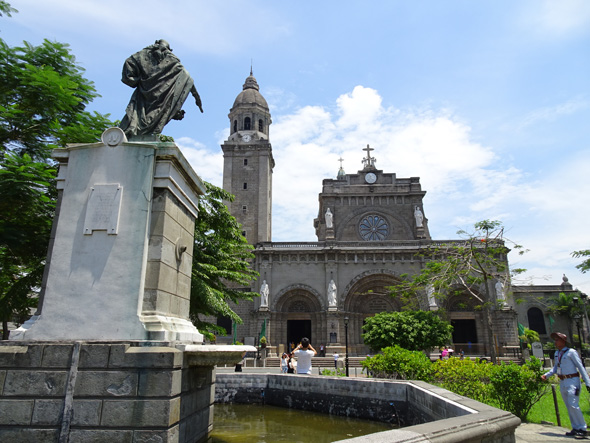 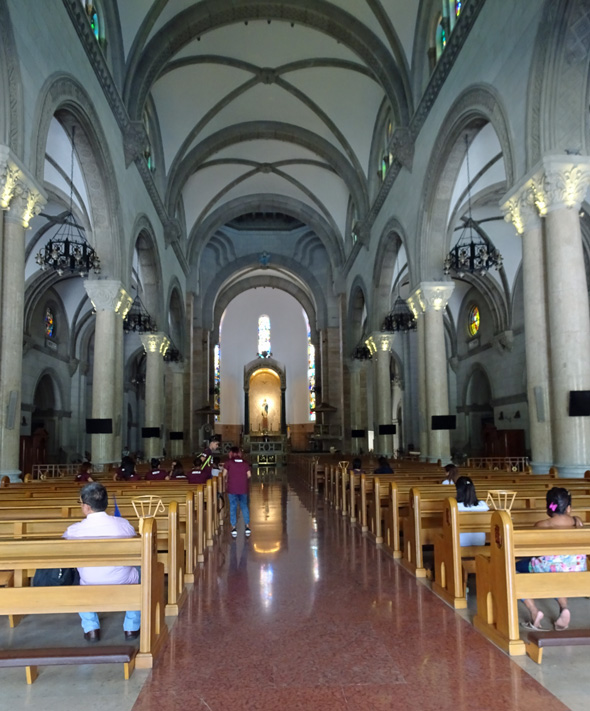 As we continued walking through the walled city, we finally reached Fort Santiago, the original settlement built in 1571 by Spain at the place where the Pasig River flows into Manila Bay. A beautiful location. There is a small entrance fee for Fort Santiago, so harassing "tour directors" traffic stopped entirely and we were left to explore the fort in peace. 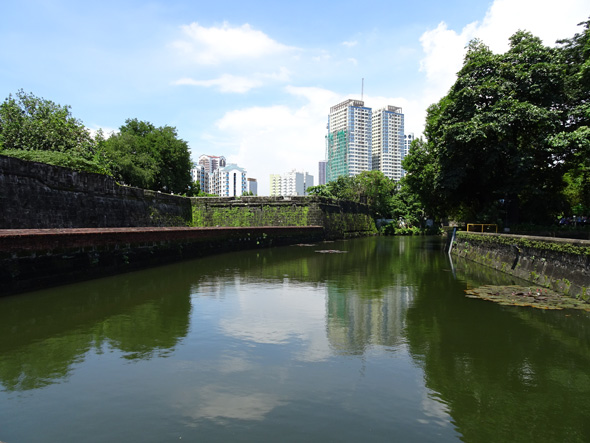 At the back corner of Fort Santiago is the Jose Rizal memorial and museum. Rizal, a national hero of The Philippines was a physician, poet, artist and writer who mastered 22 languages. Rizal wanted Spain out of his country so Filipinos could rule themselves. He was convicted of "rebellion, sedition and formation of illegal societies" and executed near Fort Santiago by the Spanish in 1896. Rizal was 35 years old. 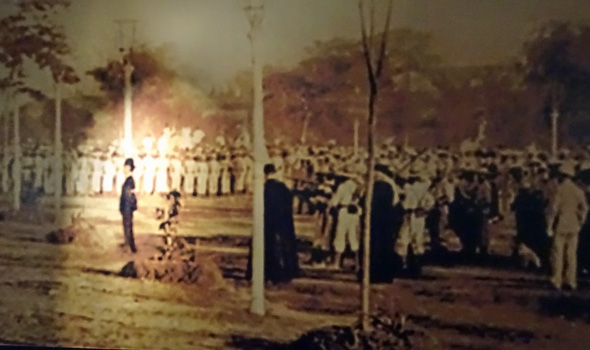 Jose Rizal being executed in Bagumbayan Field in Luneta Park in 1896.
Rizal was shot in the back. 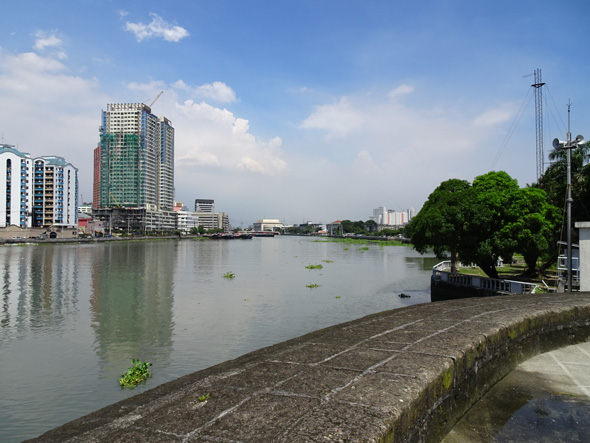 Manila, old and new - across the Pasig River. 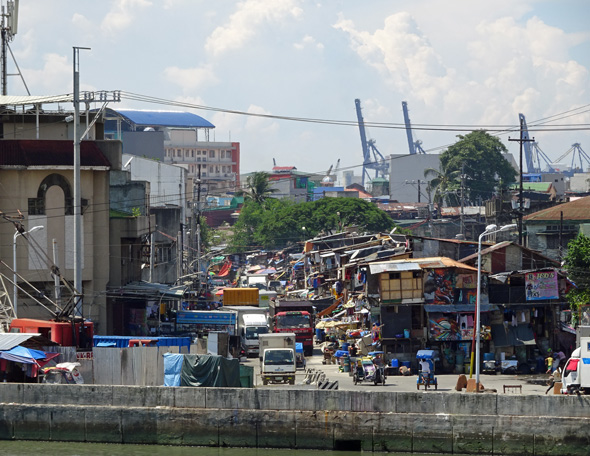 Manila, old and old - across the Pasig River

After covering over five miles today and eluding pickpockets, were were tired so returned to the hotel for a coffee in the lobby before dressing for dinner. We planned to visit the new shopping complex along the river and have dinner at the new Nobu Hotel.

Then there was a huge thunder and lightning storm. Then the power went out. Then it started to pour buckets of rain. We decided to stay in - again - and dined in the famous Champagne Room of the Manila Hotel - maybe under generator power.

I was curious about the massive wooden salad bowl used to make the table-side Caesar salads and learned the salad bowl has been in use in the Champagne Room for more than fifty years. Not only was the bowl ancient, the man in charge of making the salad has been making Caesar Salads in the Champagne Room for more than 40 years. (Vicki, are you reading this? The same guy made our salads all those years ago. Imagine. And, for good measure, I ordered your sister's favorite French Onion Soup.) 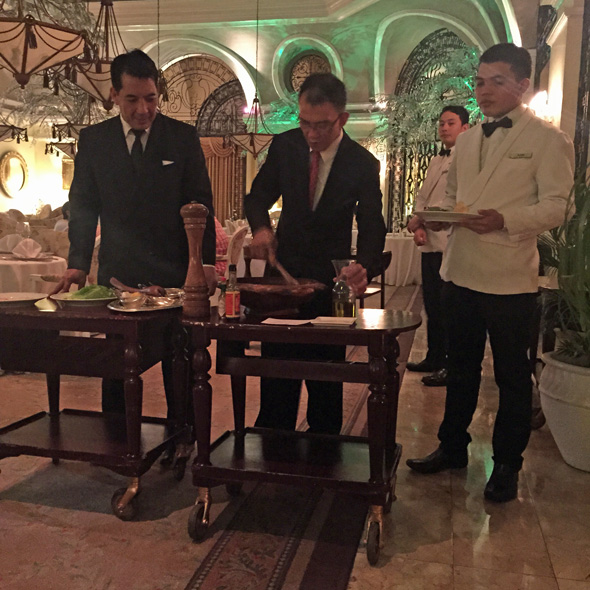 Until my next update, I remain, your worn-out correspondent.
« Dear Lisa Travel Day »