Portland, Oregon: Remember a few weeks back when I crawled into the way-back machine and finally found a long-lost recipe for a chicken salad I used to make all the time in Taipei? I made the salad this week, and dang, if it wasn’t just as I had remembered. (DT had absolutely zero recollection, so I assume he never showed-up to our mah jongg afternoons?) 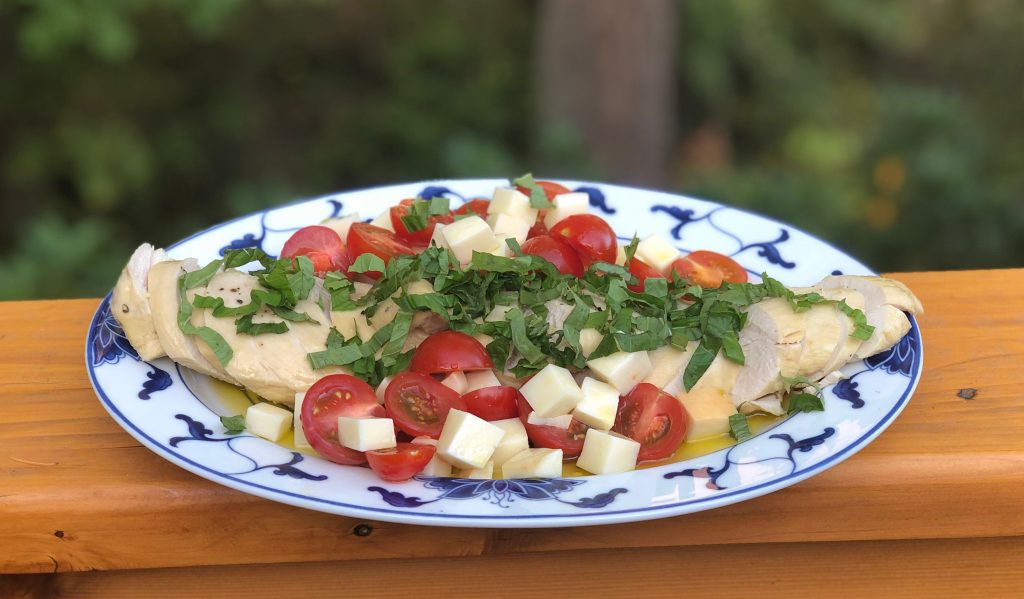 I made a mini-version of the original 1987 Gourmet magazine recipe, which calls for three 10-to 12-ounce whole skinless boneless chicken breasts, halved and trimmed. No recipe would measure chicken breasts like this today. Is that about two pounds of chicken breasts? Too confusing. Also confusing is the 1987 calls for poaching the chicken in a covered kettle. To me, a kettle is something to boil water in for tea.

A photo of the poached chicken + tomato salad recipe from Gourmet 1987: 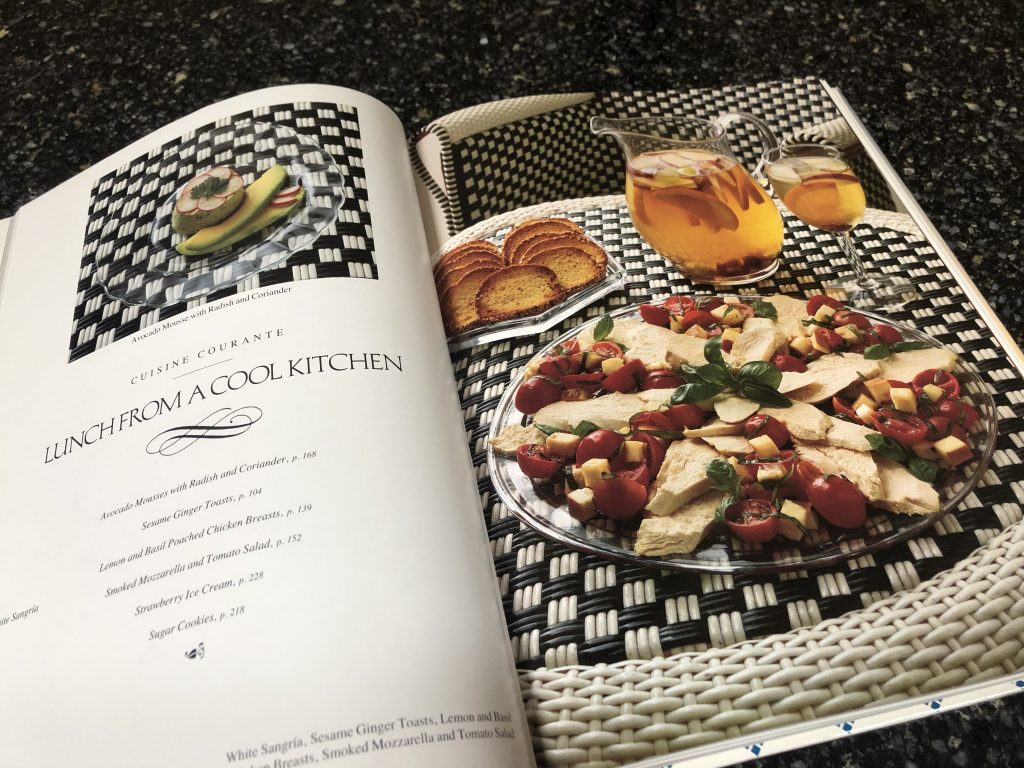 The chicken breasts were poached yesterday afternoon, cooled, and left overnight (floating in the the stock and basil) in the same pot. (I did not transfer to a bowl – seriously, why?) This evening, all I had to do was slice the chicken and toss the cubed cheese and halved cherry tomatoes in a little vinegar and olive oil, plate it all and garnish with basil chiffonade. I can’t believe the ease of this recipe. 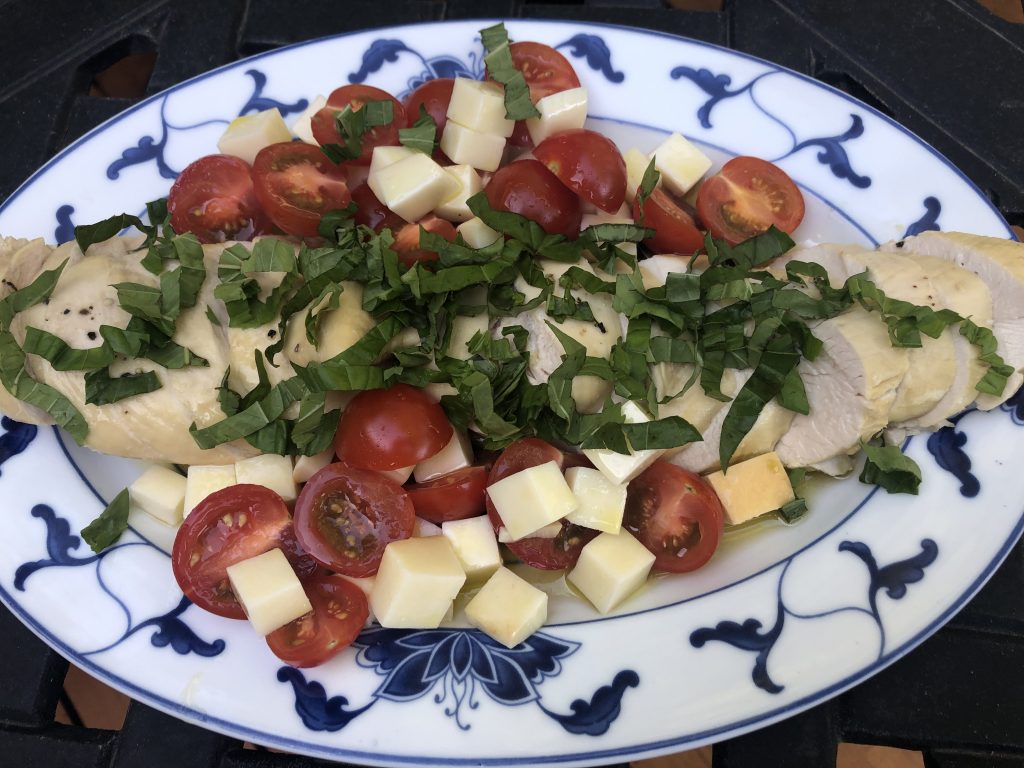 Truth be told, when we lived in Taipei, we had full-time live-in help. Shouldn’t I have been preparing something more complicated for my mah jongg parties? A souffle? (More truth: I always shopped for our food, and always cooked, in Taipei. Our helper was a bit embarrassed about this situation, as she felt this was her duty.)

This recipe is just perfect for a cold supper or luncheon. Super easy and super-make-ahead. I made a two-person version (recipe below) and we had a bit left-over. The only change I would make to the original recipe is maybe poaching the breasts a minute or two longer? Chicken breasts (especially the organic variety I purchase) seem to be more on the full-figured size these days, compared to what was available in 1987. 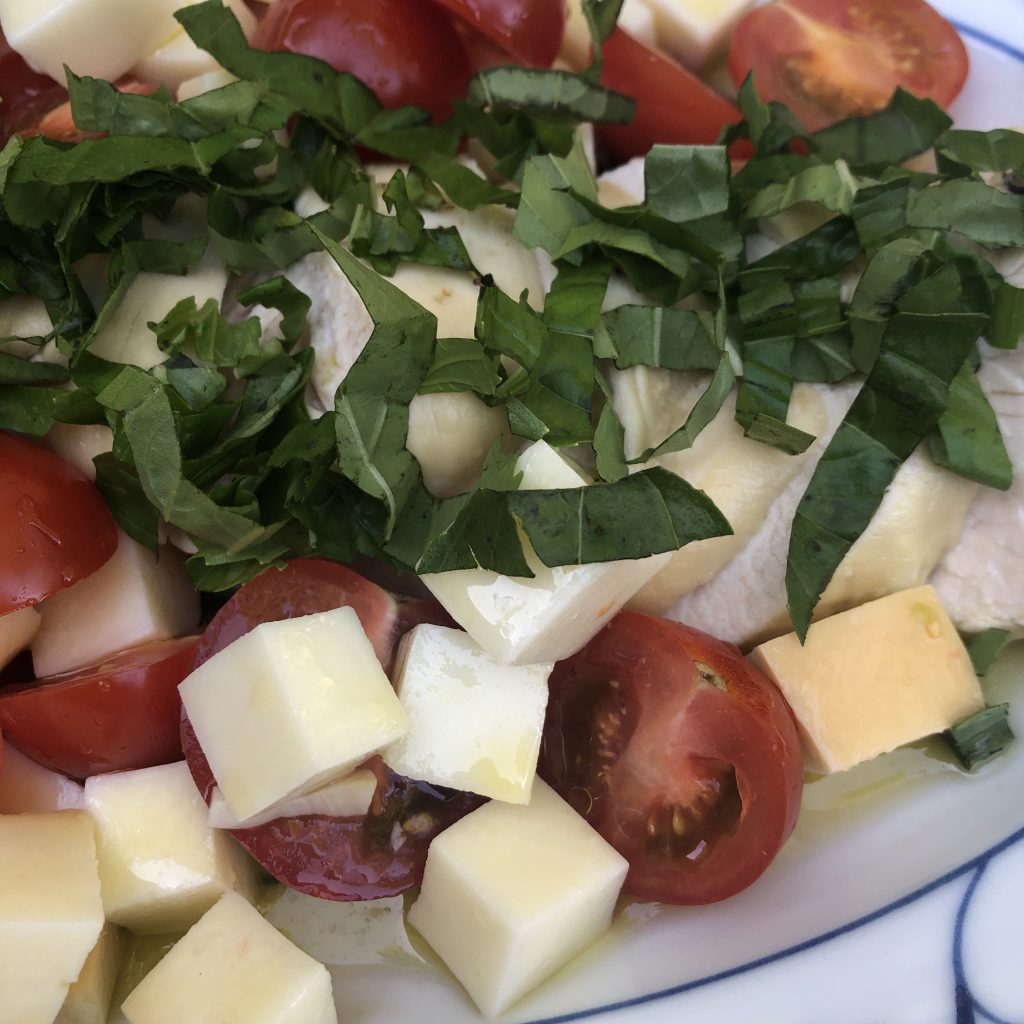 MY VERSION FOR TWO: I poached two boneless/skinless chicken breast halves (one pound total) in a medium pan, with two cups of chicken stock, 1 teaspoon of ground pepper, 1/3 cup lemon juice (from two lemons), and five stems of basil (stems and all). After it came to a boil, I let it bubble away for a full five minutes, covered, then removed the pot from heat and left it all to cool for quite a bit. The covered pot – basil and all – was transferred to the fridge overnight.

Tonight, the chicken breasts were removed from the fridge to take the chill off, then sliced on the diagonal and plated. One little basket of cherry tomatoes were sliced in half, tossed with about 3 ounces of cubed smoked mozzarella (1 cup-ish), a tablespoon of white wine vinegar, and 4 Tablespoons of extra-virgin olive oil – and plated along with the sliced chicken. Basil was sprinkled over the top. 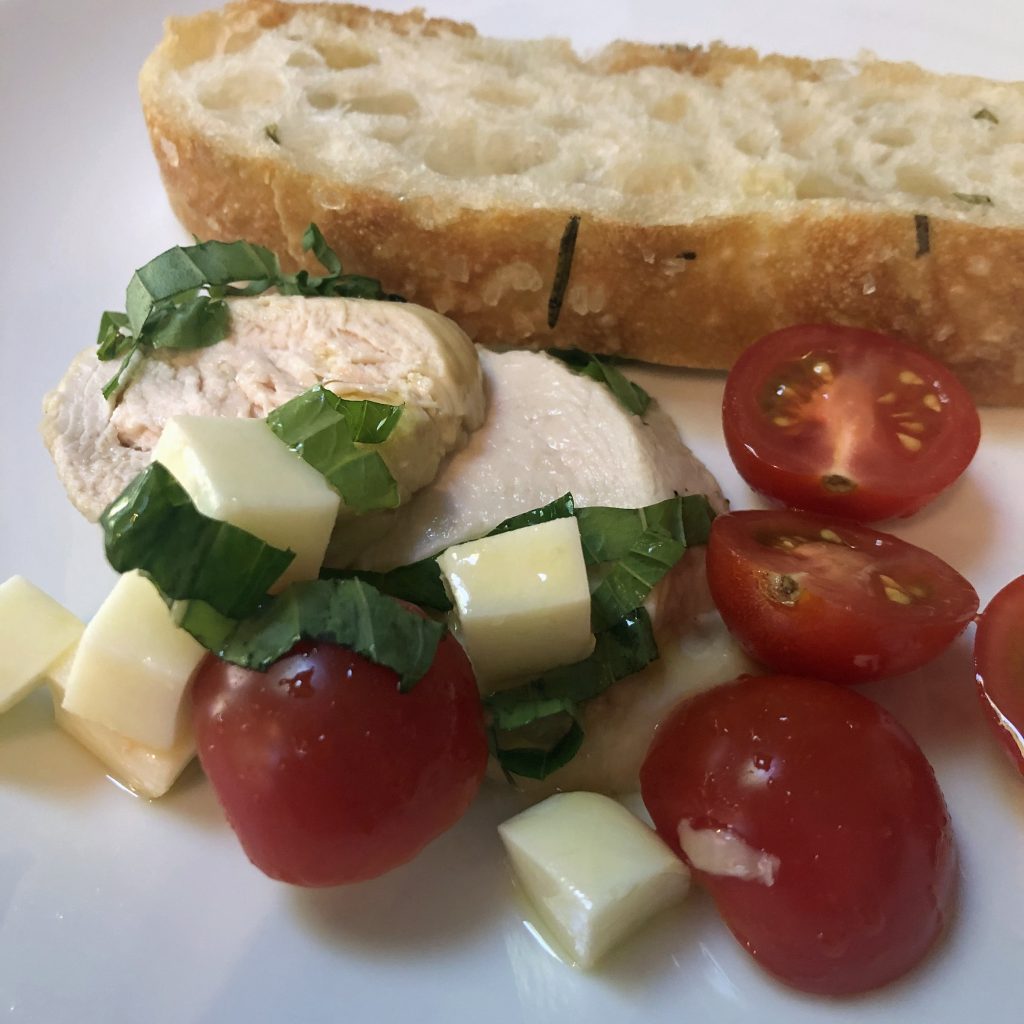 The only other thing on our menu tonight was a bit of rosemary focaccia from New Seasons Market in Portland.

The recipe from Gourmet 1987:
NOTE: Each recipe claims to serve 6… but they are supposed to be served together… so does it serve 12? Who knows?

In a kettle large enough to hold the chicken breasts in one layer combine the broth, the lemon juice, 1/4 pound of the basil, and the pepper and bring the liquid to a boil. Add the chicken breasts and cook them, covered, over high heat for 4 minutes. Remove the kettle from the heat and let the mixture stand, uncovered, until the liquid is cooled to room temperature. Transfer the mixture to a bowl and let it stand, covered and chilled, for at least 3 hours and up to 24 hours to allow the flavors to develop. Remove the chicken from the broth mixture, reserving the broth mixture for another use, and on a work surface, holding a knife at a 45-degree angle, slice it thin across the grain. Arrange the chicken decoratively on a platter with the smoked mozzarella and tomato salad, and garnish the dish with the additional basil leaves. Serves 6.

In a bowl combine the mozzarella, the tomatoes, and the basil. In a small bowl whisk together the vinegar and salt and pepper to taste, add the oil in a stream, whisking, and whisk the dressing until it is emulsified. Pour the dressing over the salad, toss the salad well, and chill it, covered, for at least 15 minutes and up to 6 hours. Serves 6.

Another photo from Gourmet 1987: 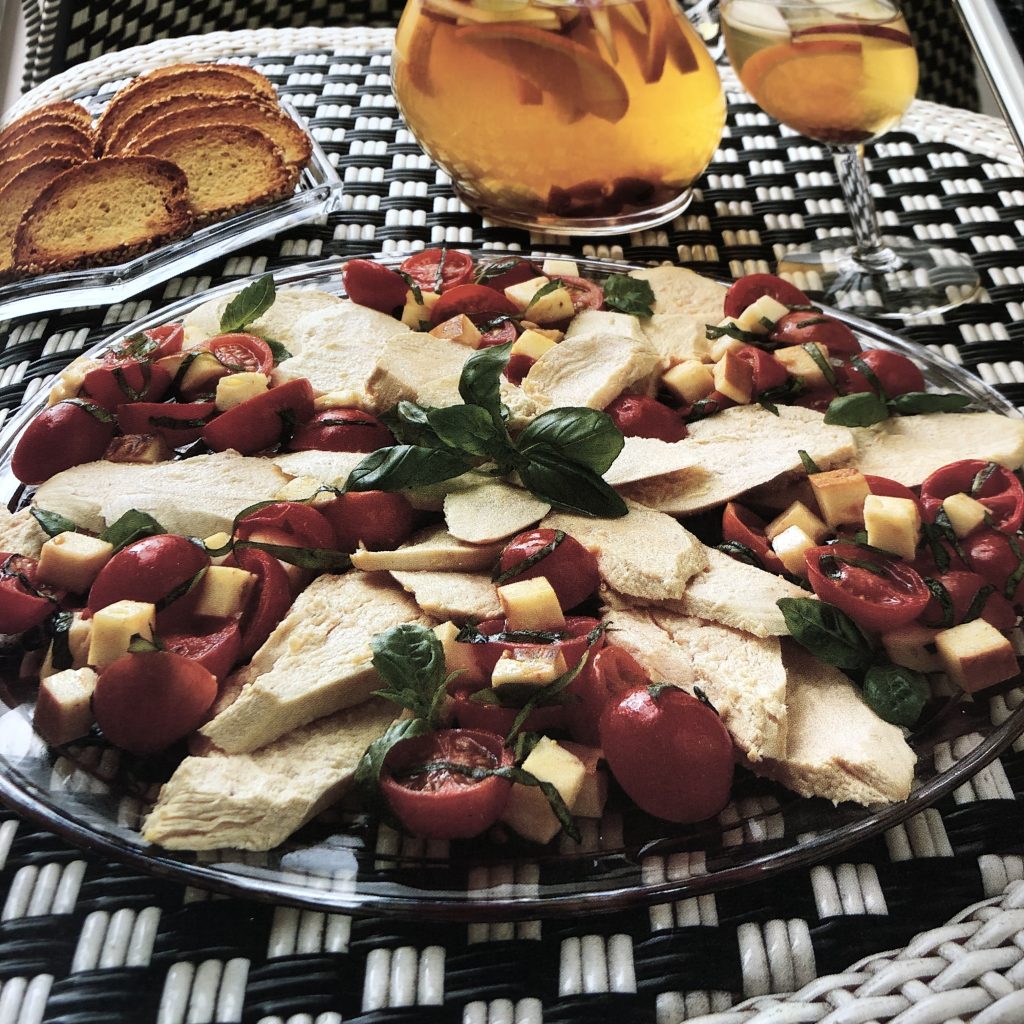 I really urge you to try this before the weather grows too cool. This recipe is still good, even after 30-something years. If you can’t find smoked mozzarella, use smoked Gouda.

Speaking of 38 30-something – Happy Birthday to the Best Daughter Ever!

Until my next update, I remain, your poached correspondent.