Remember last evening when DT and I were sitting on the (covered) front porch, enjoying the little bit of sunshine the day had to offer? While we were rocking away in our chairs, he was telling me a story and we were trying to scare-away a bird that was attempting to build a nest in our beautiful dried herb wreaths. 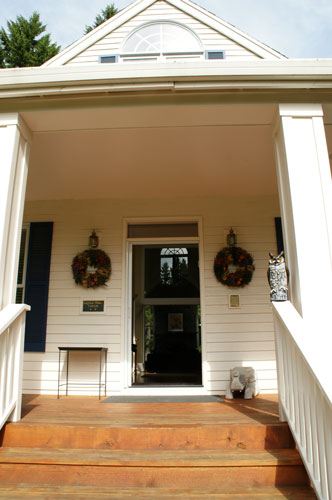 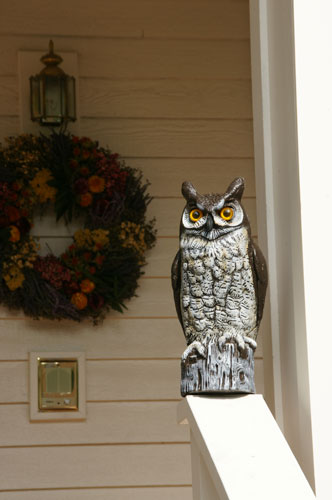 And this is the $12 plastic owl - Cisco - that I hired to scare away the birds that always make nests in the pretty wreaths on either side of the front door.

Cisco is losing his job. Dang, if a house finch didn't make a nest and before we could clear it all away, she laid a perfect little egg last evening. Rat farts. The egg is way too small to make an omelet, so we will let Mother Nature win.

I am pretty sure the babies return the next year to make a nest in their birthplace. I need to hire a real owl to stop this ugly cycle.

Anyway... back to last night... the other day, I found two photos of Dave, which I knew to be from high school, so I emailed the photos to him and asked when/where the photos taken. Dear Reader, My Husband has hundreds of tales to tell. We have been married 31 years, dated for years prior, and yet he still has so many experiences to relate.

Remind me to tell you about the "Devil Take the Hindmost" at the Cow Palace. 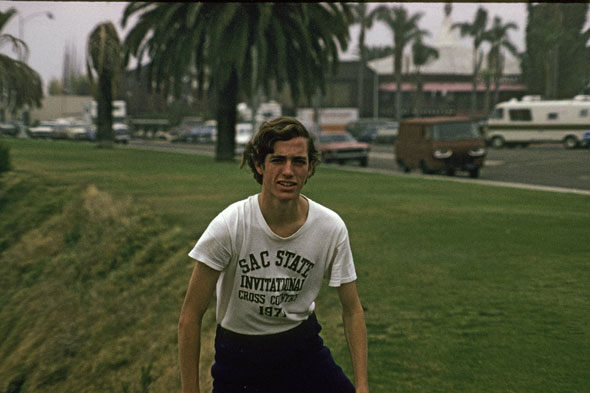 These two photos were taken in San Diego in 1971, where the national cross country championships were held. Not high school championships. Not college championships. USA championships. Dave was invited to run. Though only a junior in high school, he finished 66th place. (He remembers his place-finish from 1971, but he cannot remember Lisa's phone number.) It was an easy venture... Dave only had to drive with his high school coach from his home in central California to San Diego... and it was a great experience for a high school kid to race with the best in America. 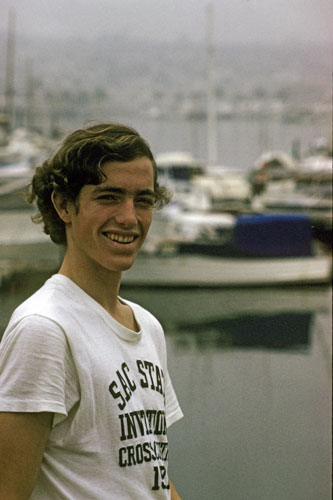 Impressed with his effort and impressed with his races during his senior year, the booster club in his home town paid for Dave (and his coach/chaperone) to fly to Chicago to compete in the USA Championships the next year.

Thanksgiving Day, 1972. Dave and his coach drove to San Francisco and flew to Chicago. The plane was one of the new massive flying machines that held hundreds of passengers. The plane carried a crew of 16. There were 11 passengers on the flight. Before the plane left the ground, every passenger was asked to move up to First Class and it seems they all had a little party all the way to Chicago... well, everyone except 17 year old Dave... though he remembers they actually had real food (remember those days?) and the flight attendants (known then as stewardesses) were super attentive.

When they arrived in Chicago - late night Thanksgiving - Dave and his coach took a taxi to the Marriot Hotel in downtown Chicago. When they arrived at the hotel, it seemed their reservations were not at that downtown Marriott, but at a nearby downtown Marriott. (Don't forget, this was way way way way way way before the interweb, cell phones, GPS or any modern conveniences we take for granted today.) DT and his coach decide to walk to the other Marriott, as it is only 1/4 mile away. The doorman at the hotel told them, "You are taking a taxi." Say what? Seems the doorman felt they would be robbed/murdered if they walked the 1/4 mile. Apparently, it wasn't a nice neighborhood. Dave and his coach hopped in a taxi and traveled the two minute drive. They arrived alive to the other hotel.

After checking-in to their rooms, DT and his chaperone rode the elevator up to their floor. As they were walking down the hall, they come across - and ignored - two men using a crowbar to crack the front panel off the Coke machine on their floor. Skinny Boy from a Small Town meets The Real World.

Dave finished in 60th place. He still claims to have never been so cold in his entire life. He still can't understand how he could run 6 miles and never break a sweat. Miserable. Cold. Icy. Then he had to return home and face the disappointment of the booster club.

Life is a learning curve. 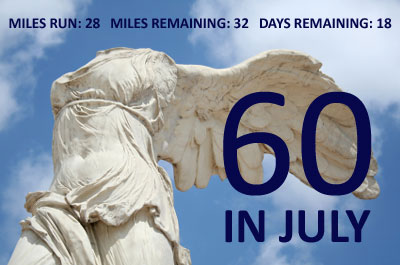 Three miles today... which brings me 2 miles ahead of schedule... but I am not running tomorrow, so I will be back to even. Give and Take.

Until my next update, I remain, your nesting correspondent.
« 31 Years Vegan Shabbat »