We went to Paris last night and were Frenchmen for the Night. (Only I could tie-in two Jimmy Buffett songs in an article about Steak Frites.) Tonight I tested the cover recipe on the May 2008 Bon Appetit

Magazine - The Travel Issue. DT just adores steak frites and I just adore him, so I thought it would be a nice meal after a particularly long week apart.

Of course, my first stop was to my local New Seasons Market where they had beef tenderloin for $24.95 per pound. Ouch! Dang, this recipe had better be good! As the butcher was selecting two perfect steaks, he told me a lady had come in earlier to buy a tenderloin to grind-up for her dog. Was I preparing dog food for my husband, or was that the world's luckiest dog?

The wine selection at New Seasons is very good. The wine guy suggested a bottle of Saint Cosme 2006 Cotes-Du-Rhone that was going to score a 90 in Wine Spectator. "Get it now" he said, "before the magazine comes out and everyone snaps it up." I even bought a baguette and bunch of frisée. If you are going to France for the night, bring a lot of accessories! 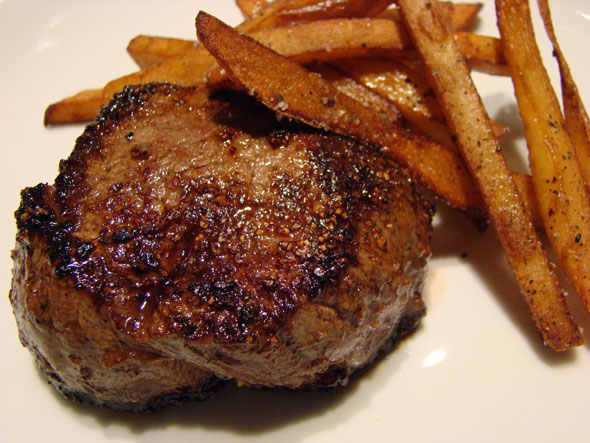 The recipe is simple: coat each side of the steak with ½ teaspoon of cracked Salawak White Pepper (everyone has this in their kitchen, right?) and sear the steaks in a butter and oil mixture in a skillet over a high heat for 5 minutes per side. The steaks are then removed to plates and a quick sauce is made by deglazing the pan with a splash of cognac, then adding a bit of beef stock and heavy cream, stirring until thickened and pouring the sauce over the steak. (Note: this recipe is treif.) As much as it pains me to "fry" an expensive piece of meat, I often sear steaks in a stainless steel skillet and finish them in the oven (very common technique used in restaurants). Since our cuts were ridiculously thick, I left them for 7 minutes per side.

To accompany the steak, the recipe calls for frying julienned potatoes twice in hot oil - a messy job that made the entire house smell like a McDonald's - but the results were good enough. I dressed the frisée in white wine vinegar, extra virgin olive oil, salt and cracked black pepper. 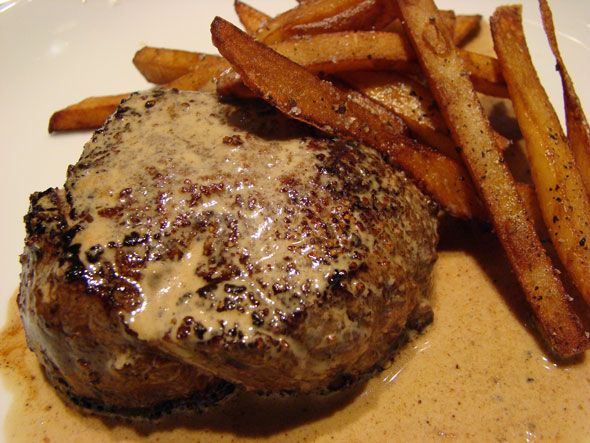 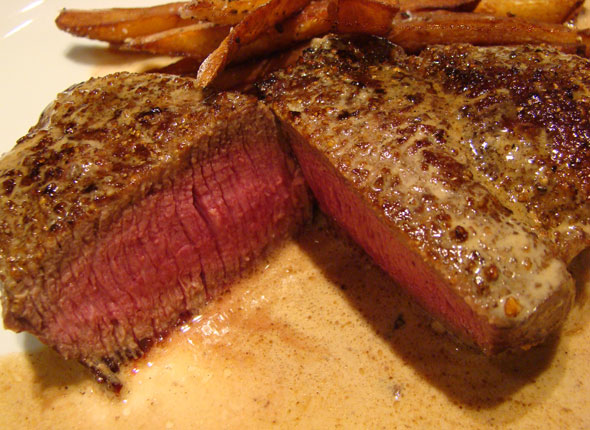 The wine was just scrumptious. We both loved it and the bottle is empty. The steaks were perfectly cooked. Neither of us felt the sauce added much to the dish, except to make the frites soggy. The salad was crunchy, a little bitter and refreshing. The organic baguette was addictive.

Our trip to France was quite fun, and we didn't even have to leave the Great State of Oregon to make the trip. The beef was grown down the road, the potatoes and greens (both organic) were local. Though the wine came from France, a nice bottle of Ponzi Pinot Noir would also have been nice. The only thing missing was a smoke-filled room, but, happily, even Paris has gone smoke-free since January 2007. May as well stay home.

This recipe will be available at the Bon Appetit website. I do suggest trying the steak (and that fabulous wine), but skip the frites part and do potato wedges in your oven.