Portland, Oregon:  Last year, on our way back to Oregon after a winter in Indio, we meandered our way up to Paso Robles and ended up visiting during their annual wine festival. It was a great week. We saw Tony Bennett in concert. We attended a marvelous wine tasting dinner with organic foods paired with wines grown in a specific - Adelaida - district of the region. We tasted olive oils, went to Morro Bay, tasted countless micro-brews, and someone tried to run me off the road while I was jogging... but what I really remember was the magical potato risotto served to me at Artisan.

It was not a rice dish with potato, but potato cut so small as to resemble rice and made into a creamy side-dish that resembled risotto. I just love potatoes. Finally, I decided to give it a try. 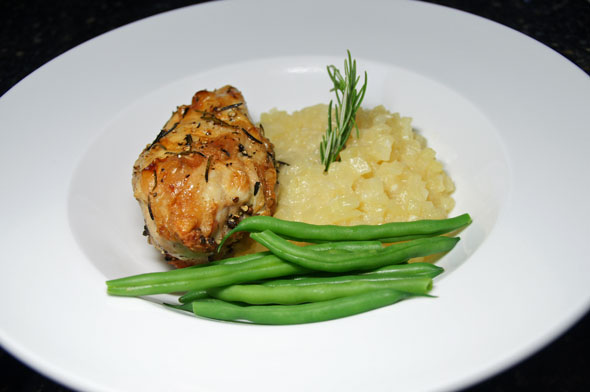 There just isn't a definitive recipe or answer on the old interweb. I read what I could and finally decided I would make it just like I would make risotto. Mostly.

I peeled and deftly minced two Yukon Gold potatoes and placed the cubes in a bowl of water. (The two potatoes, peeled and minced, equalled exactly 3 cups.) I also very finely minced 1/2 cup onion and one large garlic clove. The onion and garlic were sauteed (in a small Dutch oven) in 1 Tablespoon of butter and 1 Tablespoon of olive oil for about ten minutes, until they were really soft, but not yet browned. Then the drained potato cubes were added, along with one cup of chicken stock. I also added about a one-inch piece of fresh rosemary. Then the stirring began, with the mixture keeping a steady, slow boil. Stirring. Stirring. Stirring.

Just like when making risotto, there is a constant need to stir. I was surprised it took nearly 30 minutes for the liquid to be absorbed/evaporate, but the potatoes were still too al dente. So, I added 1/4 cup of water and stirred for another five minutes... and then added another 1/4 cup of water and five minutes later the potatoes were soft, but not mushy. To finish the dish, I removed the rosemary, then stirred-in 1/2 cup grated Parmesan cheese. This is when the magic happened. The "risotto" became creamy and perfect.

When I had potato risotto in Paso Robles, it was served with a grilled chicken breast and asparagus. I could not find nice asparagus this week, so substituted green beans. My Driver grilled two (deboned, but with skin) chicken breasts that had been marinating in white wine, salt, olive oil and fresh rosemary. 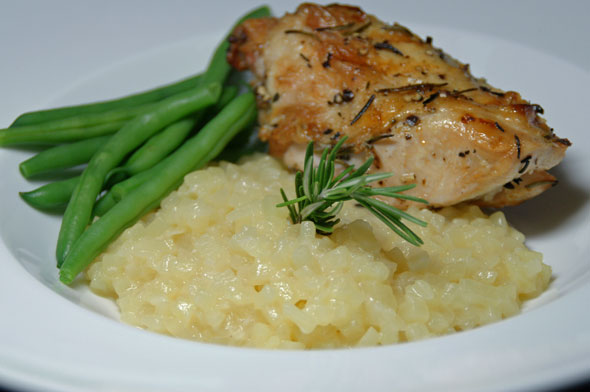 It was sooooo good! Rich, creamy, with just a hint of rosemary. No need for salt, as the cheese added the perfect amount. Good enough to be served on it's own, like risotto, as a main course.

The risotto could be made vegetarian by using a vegetable stock... but my vegetable stock is always kinda orange and I didn't think it would make for an attractive final product. The cheese is the key to happiness in this potato dish. 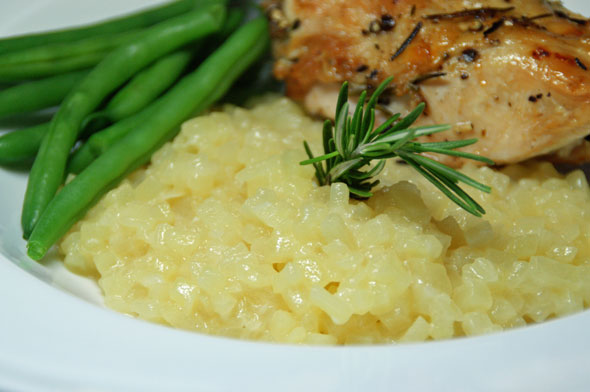 I will make this again.

Down in SoCal... Little Miss Lucy started preschool this week. Only a few hours and only a few days a week - and no more diapers! 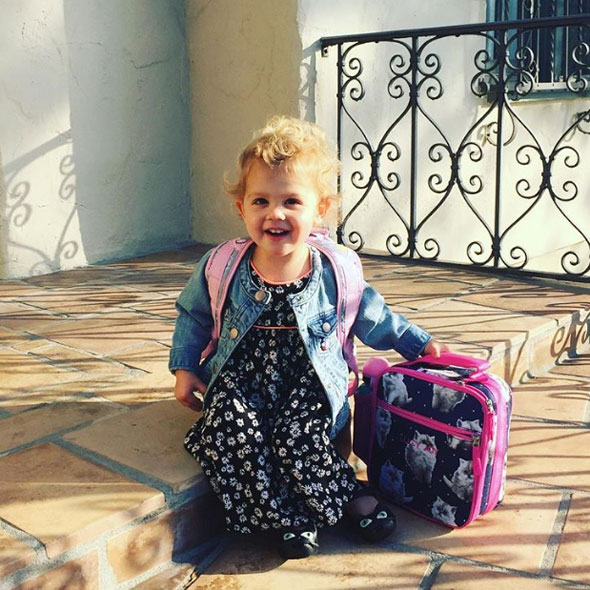 But not as excited as Lisa.

Until my next update, I remain, your stirred correspondent.