Seattle, Washington: Surprise! DT and I are in Seattle for the weekend to catch a few Mariner (v Padres) games. I was up early, shipped Camping Journal orders, ran 3 miles, packed a gourmet lunch for our trip, threw a few things in a suitcase and we were out the door by 11a. Busy girl! 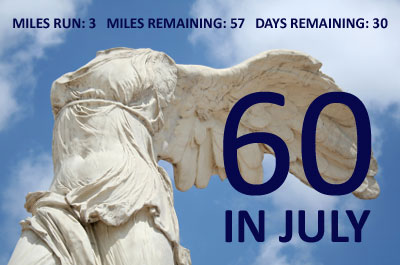 Get used to this photo. I am going to update my mileage constantly all month.

Just a little info about the headless winged statue in the above photo. It is Winged Victory of Samothrace - aka The Goddess of Victory, aka NIKE. (We Goddesses stick together, though I prefer to keep my head... and arms... but I wouldn't mind the rest of her figure.) The statue was discovered in 1863 by Frenchman Charles Champoiseau on the Greek island of Samothrace. Champoiseau immediately shipped the statue to France. (I don't think you can do that sort of thing any longer. It's called stealing.) The Goddess of Victory resides in the Louvre Museum in Paris. It is believed the statue was carved to commemorate a naval victory at Cyprus circa 290 BC (3472 in the Hebrew calendar). A few cool facts: the original statue had arms and a head and the right arm was reaching up to cup her mouth - the Goddess was calling out to announce the victory! The head and arms have never been recovered, though a few bits of a hand are on display at the Louvre.

Okay. That is your trivial history lesson for the day. Save this stuff up for Jeopardy.

Back to our day. We took the train to Seattle... and while we were in Portland's Union Station, My Dear Husband remarked that I had forgotten the gourmet lunch! Seriously? What a knucklehead. Is anyone (other than me) noticing a pattern of forgetting food items in my freezer/fridge when embarking on a trip? Is there an app for this?) I sent a text to Brandon (our house sitter) and he is enjoying a lovely organic chicken caprese salad with his girlfriend today. Sigh. I don't even want to describe the "turkey & havarti" sandwich DT and I shared on the train.

The Amtrak Cascade travels from Eugene, Oregon to Vancouver, Canada. It is a very relaxing three hour ride and they have free wifi in the cars! Woot! 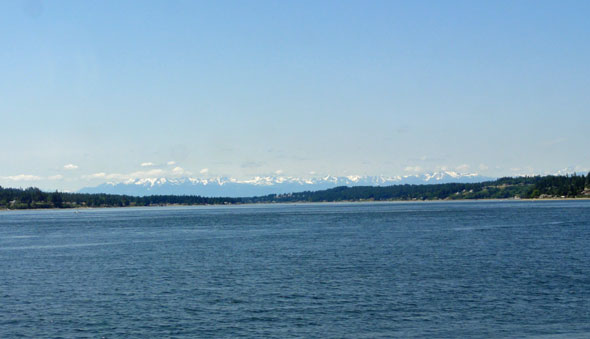 If you ever have a chance to drive or take the train between Portland and Seattle, don't forget your camera (assuming it is a sunny day). We were treated to nearly constant views the rivers (both the Willamette and Columbia rivers are crossed, not to mention many other smaller rivers), mountains (Mt. Hood, Mt. Adams, Mount St. Helens, Rainier and the mountains in Washington's Olympic Peninsula (above). Gorgeous!

We grabbed a taxi from King Street Station in Seattle to our hotel, settled-in, and then walked down - about ten blocks - the Safeco Field to see the Mariners v San Diego Padres with Dad & Mary (and her children and grandchildren)! 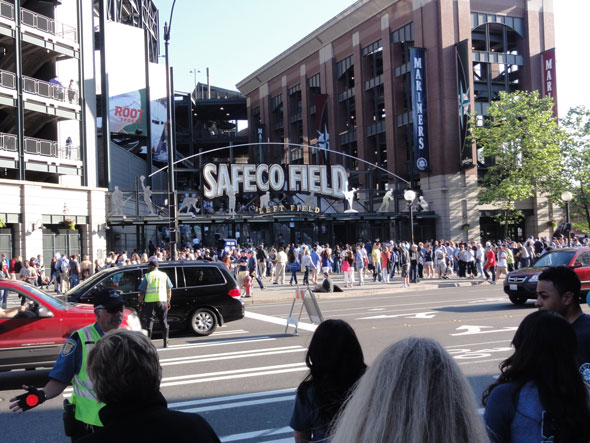 It was a busy holiday night at the ball park! Tonight was "Throw Back Night" - celebrating the 1980s. 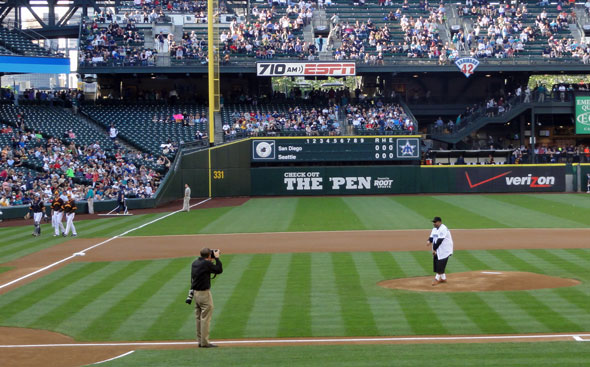 The Mariners were wearing replica uniforms from the 1980's and Seattle native Sir Mix-A-Lot threw-out the first pitch. Since Sir M totally bombed at throwing out the first pitch, they let him throw out the second pitch... which, I am happy to report, was much more respectable. As the hitters came up to bat, the park sound system blasted-out their chosen 80s music. It was a fun night! 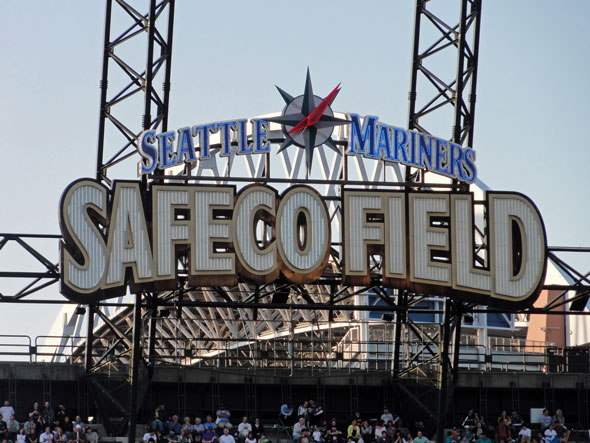 If you have been following this website for any time at all, you know I am a huge Ichiro Suzuki fan. I may have snapped a few too many photos of my favorite Mariner. 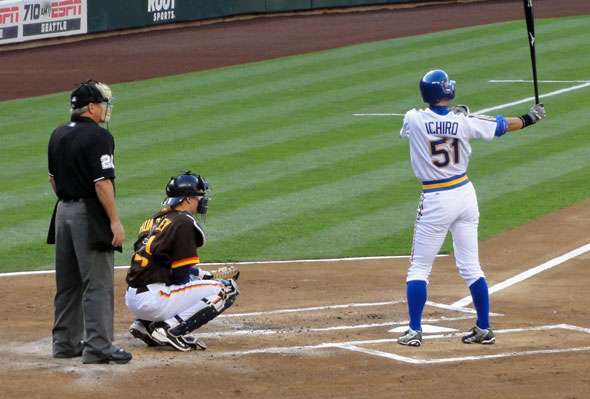 Love the 80s uniform! DT swears the reason Ichiro is never injured is because he is stretching 24/7/365. I think Ichiro is getting old. I think his backside is getting larger. DT thinks Ichiro's eyes are going. Ichiro is not having a good year. This is the final year of his contract.

Maybe it is the throw-back-80s uniform that makes his backside looks larger? Maybe because he is a lefty, this is the only shot I could get from our seats? Maybe because I only brought my teeny pocket-sized camera on this weekend trip? 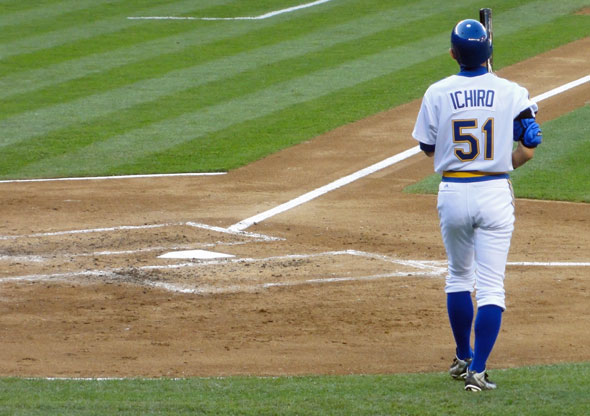 Does this uniform make my butt look big?

Ichiro Suzuki has it in his contract that his given name is on his uniform. Seriously. 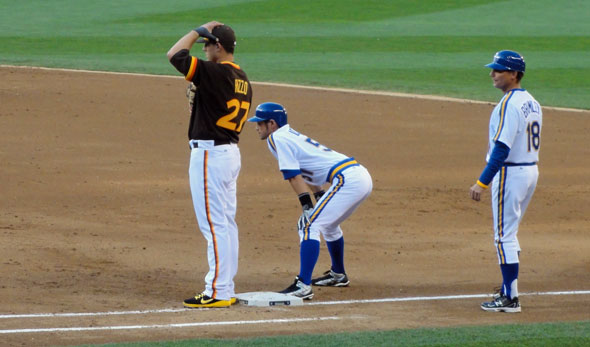 Ichiro can still steal a base faster than I can grab an olive for my martini. 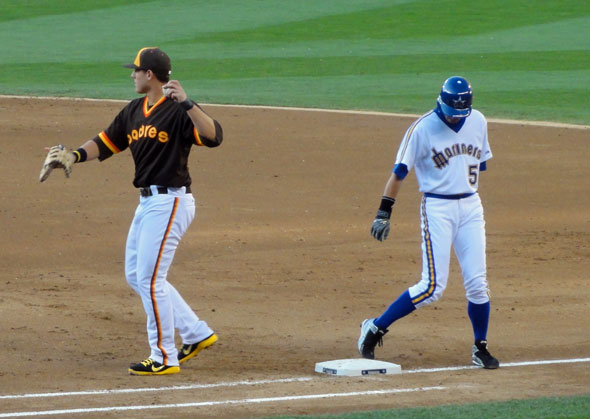 "Don't even think you can get me out on first base. I am Ichiro." 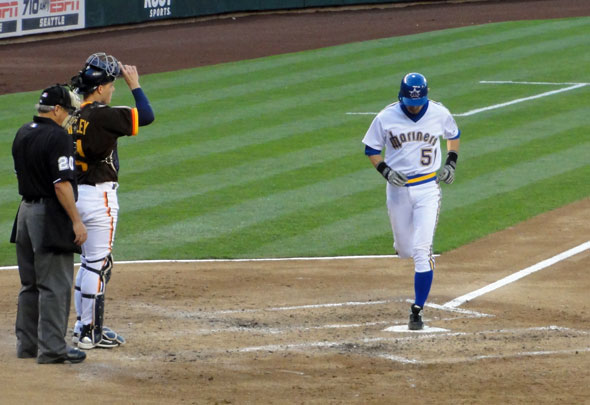 Ichiro's only score tonight was on a walk. Whatever. He scored. 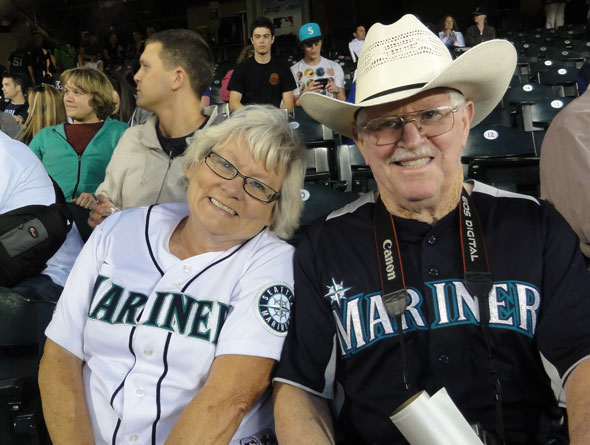 Mary is from Colorado and a huge Rockies fan. Dad is a huge Mariner fan... yet, somehow, they are making it work!

Until my next update, from Safeco Field, I remain, your Safeco Field correspondent.
« Here’s the Beef A Big Day in the Emerald City »