Indio, California: It's getting time to move this household north. Less than a hundred hardy campers remain at this resort in Indio - and we rarely see any of them as everyone is inside their air conditioned coaches all day. Too hot or too windy to be outdoors. The restaurant closed Monday night. Everyone still here appeared at the final night repast. Repast really does not truly describe the menu, which consisted of anything/everything lingering in the kitchen - none of the usual fancy three-course dinners - but sandwiches, burgers and salads. The bar was nearly out of wine and beer, and no more would be ordered until the restaurant opens again in October. At one point, the restaurant manager, Byron, had to send someone to the grocer for ketchup. Mary and Captain Jim invited us to dine with them, and we were the cheapest dates - the most expensive item on the final night menu was $13 - but one of the most fun nights we have spent at the Top of the Falls with Our Dear Friends. The waiters were casual, our maître d' was without a tie (first time I have ever witnessed this omission on the ever-elegant Art). I still remember the year I had to bring my own bottle of Tanqueray gin to the bar on the last night - they were out. At 8:30p, the staff kicked-out the members and had their own party... no doubt swilling-down the remaining booze and celebrating six months of vacay without slinging cocktails and steaks for us old fogies. But not to worry, a hat was passed for an additional thank you to our loyal, friendly, patient and efficient staff. But when our meeting place closes, the heart of our resort closes. The parade of motorhomes flooding out of here Tuesday morning was impressive. And depressing. We won't be far behind. Dave and I had our last-of-the-season (we think) dinner party Tuesday night. Tom wanted to learn how to make potstickers. Riki and Lowell wanted to learn to make potstickers. So I made a bowl of chicken filling and showed them all how to stuff a dumpling skin, decoratively fold/seal the wrapper, then how to brown and steam the yummy bundles. My students ate their homework! We also served grilled flank steak with a pineapple salsa (recipe coming soon), steamed Jasmine rice, and Spicy Asian Slaw. Riki brought us the cutest flower arrangement as a hostess gift: 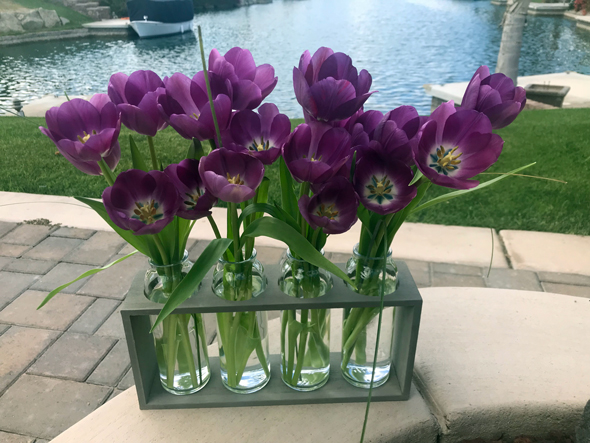 First Thursday celebration in Old Town La Quinta. Since we had not made it to any of the other street fairs, we decided to go tonight. A band was playing country music on the lawn and a few people had gathered, but there wasn't much happening on the street. However, the restaurants and bars were packed with happy hour celebrants. Just when you think everyone has left town for the summer... where are all these people hiding?

Dave and I wanted to try a new Italian restaurant that had taken-over the old Crab Shack space in Old Town. Our friend, Jose, is now working at Enzo's. The crowds were out the door at this new place, but we were promised a table in Jose's section, ordered a cocktail, and went out on the bocce ball court to enjoy a little friendly competition while waiting. 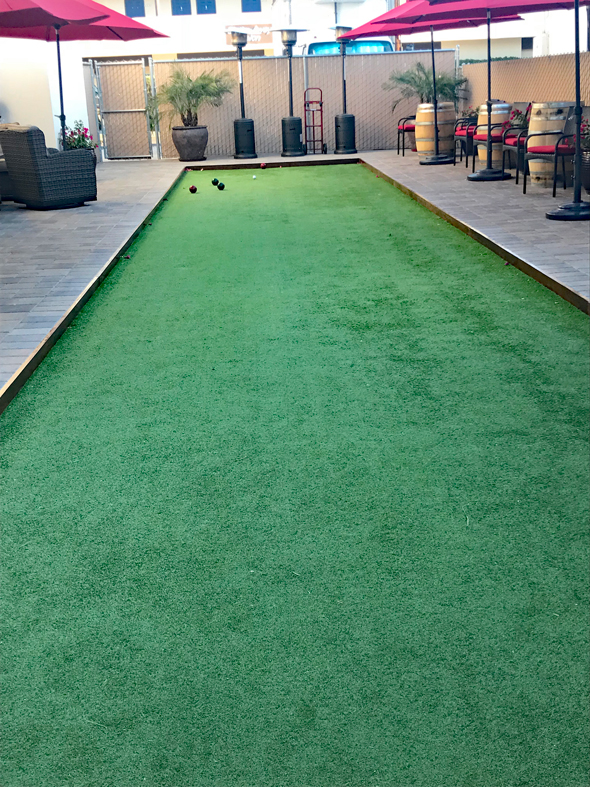 Every seat filled! And this is the only interior shot you will see. No food photos. No food. We waited and waited and waited, but no one came to take our order or even offer a drink. Looking over the menu, it may be difficult to eat here if you do not eat pork. Even their osso buco is pork. Their veal has pork. Pork. Pork. Pork. Maybe Enzo owns a pig farm? We will not know until next season, because we ended up just leaving - and went home to make popcorn and watch a track meet on television.

And I may have baked a batch of oatmeal raisin cookies. We will make one last trek to Los Angeles tomorrow. Leo's piano recital - and to celebrate Dave's birthday.

Until my next update, I remain, your hungry correspondent.