Tucson, Arizona: My alarm rang at 7 o'clock this morning, but it was still dark and I refused to get out of bed before sunrise. The man camped next to us started making all sorts of racket. He was camped in an ancient small travel trailer and it appeared his abode had not moved in several years, and his campsite had amassed quite an assortment of "belongings". However, when I looked out the window at 7:30, the guy - and every single item of stuff around his site - was gone. Possibly his quadrant was sucked-up into space by aliens?

I had no time to ponder the method of his departure, because my computer was downloading 5,388 spam emails from Russia to my personal email account. The same message. 5,388 of them. I had to shut-down my email program and go to my email server via the web and take care of the onslaught. Luckily, I was able to find the source of the spam and s/he has been reported. I'm sure the KGB has him/her in handcuffs on his way to Siberia right now. 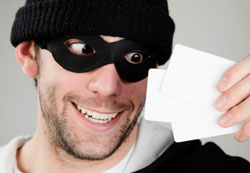 Only to be followed by another several hours of my life I will never get back because of a lovely human who used our credit card to order himself a nice new Sony gaming console this morning. Aren't we ever-so generous? However this thief wasn't very smart and I was able to track him down. I learned his name. Where he works. I know the name of his boss. I learned his age and his race. I also know if Perry Mason had the internet at his disposal, his TV show would be about two minutes long. Scary how much you can learn about someone via the internet. Mr. Jerkface will not be receiving a new Sony gaming system, but he will be receiving a knock on the door from the San Jose Police.

By now it was nearly noon. I had missed my run, my breakfast, and was so worked-up with anger/stress and so very disappointed in my fellow humans, I was in no mood to run and anyway it was just too late - I was starving. We had planned to spend the day at the Arizona-Sonora Desert Museum (zoo), and there was still time, so My Driver herded me into the car, knowing he needed to calm me down and feed me first.

Tucson is famous for inventing the chimichanga (at the often-visited-by-us El Charro Cafe), and I am pretty-sure I have never visited this town without eating this deep-fried meal. (Actually, I've never eaten a chimichanga anywhere except Tucson.) Brother Steve & Gina suggested we visit Teresa's Mosaic Cafe to try her version. Perfect - it was kinda on the way to the Desert Museum. We arrived at one o'clock. 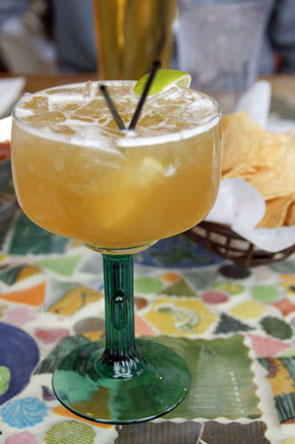 After my morning, you may understand why I felt it necessary appropriate to drink a margarita at my late breakfast/lunch? Every table at Teresa's Mosaic Cafe is a colorful mosaic. Pretty! 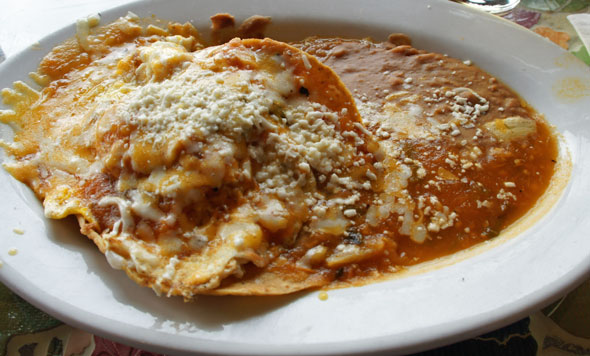 We learned Teresa's Mosaic Cafe was challenged to a Huevos Rancheros Throwdown by chef Bobby Flay. We also learned the Mosaic Cafe lost the throw-down. Say what? DT ate every bite.

I ordered the Machaca de Tres Chiles Chimichanga and had it served "enchilada style" (smothered in enchilada sauce). A huge flour tortilla is stuffed and rolled with shredded seasoned beef, onions, green peppers, poblano and green chiles, then the entire enchilada is deep fried, creating a chimichanga (thingamajig in Spanish). 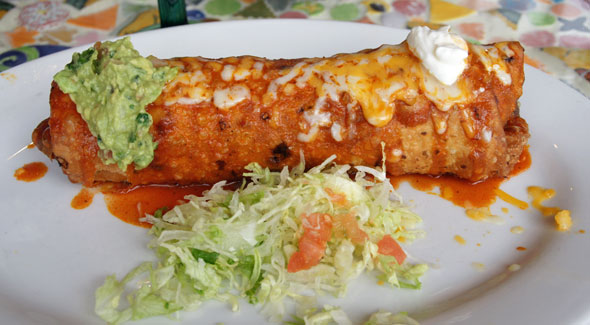 This was one of the finest things I have eaten in weeks and weeks. DT claims I said "extraordinary" four times during our meal. After asking our server to tell the chef how much I enjoyed my chimichanga, he said the "owner was cooking today". My luck was changing! 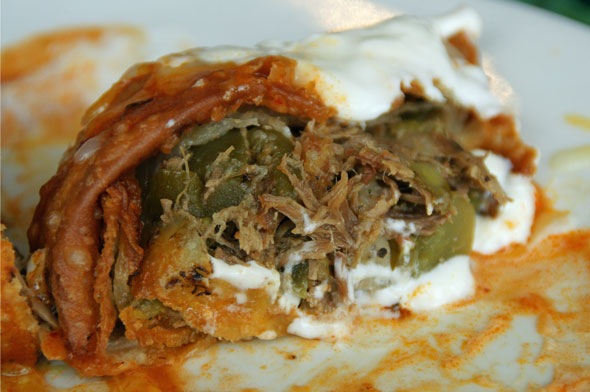 While we were at breakfast/lunch/brunch, DT suggested instead of visiting the zoo, where he had been several times before, we take a drive up to the top of Mt. Lemmon. Why not? My day could only improve. Sometimes I just need to remember that man is a genius.

Mt. Lemmon is the highest point in the Santa Catalina Mountains north of Tucson. A 25-mile road, the Catalina Highway, winds up the Sky Island Scenic Drive to the 9,157 foot peak in the Coronado National Forest. (Tucson's elevation is around 2500.) It is a very curvy road, and obviously steep. Do not take this road in your 45-foot motorhome, but do take this drive. For the fifth time today, I am going to say extraordinary. 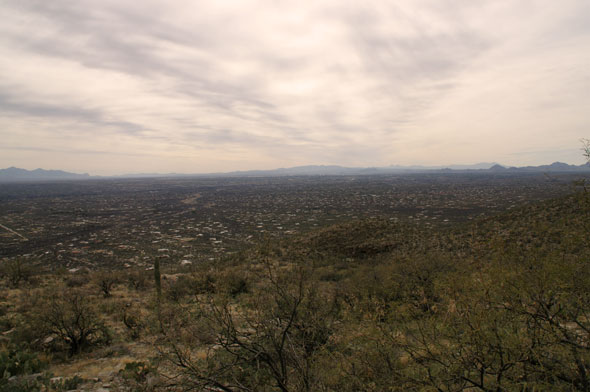 Tucson from the base of Mt. Lemmon 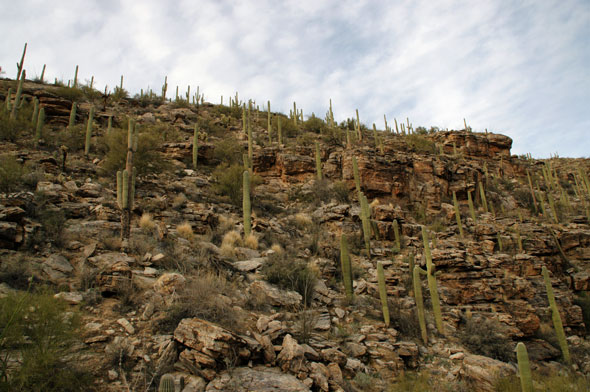 The Sky Island Scenic Drive starts in flat Tucson and head up, up up, past saguaros as far as the eye can see, then the road continues past massive boulders in sparse desert hills and finally into pine forests and snow. Yes, snow! All in 25 miles. How is this even possible? Magical. I love zoos, but DT really knew what he was doing today by suggesting we take this drive. 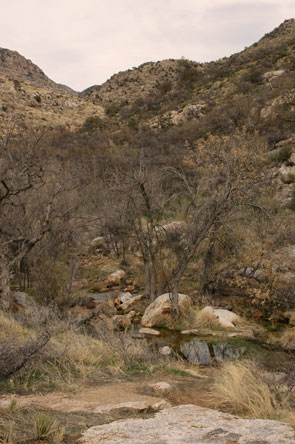 A little creek was running down Molino Canyon 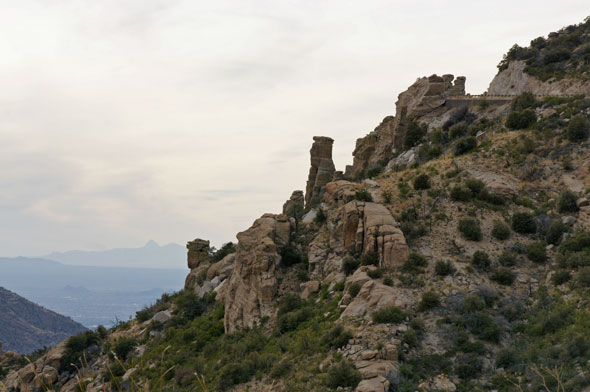 Another view back towards Tucson

The road is one of the most impressive aspects of the drive! Impossible that a route through this rough terrain could be planned, with shoulders wide enough to hold the many bicyclists and runners on the steep slopes. 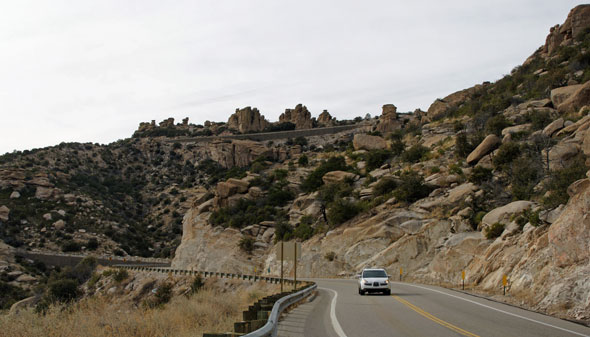 Notice the road at the top of the ridge? 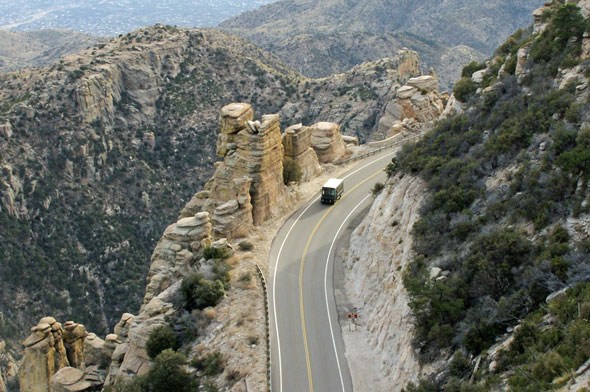 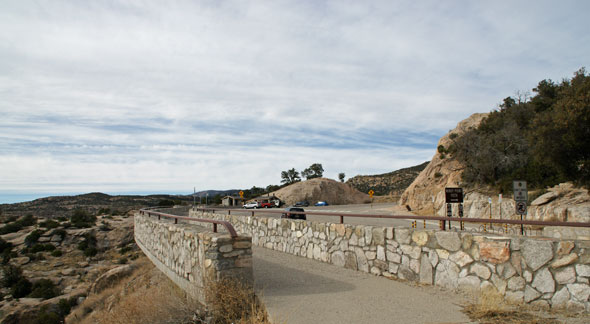 Many of the roadside vista points were built with prison labor 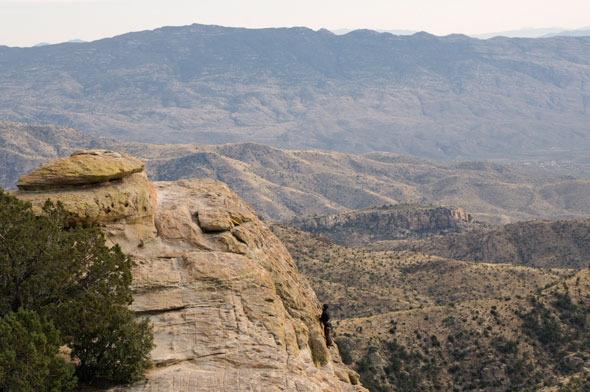 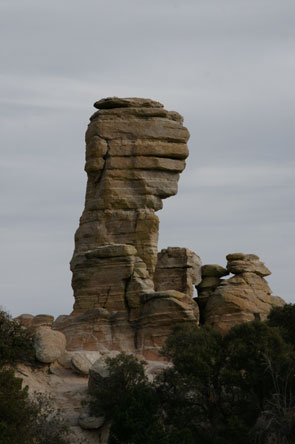 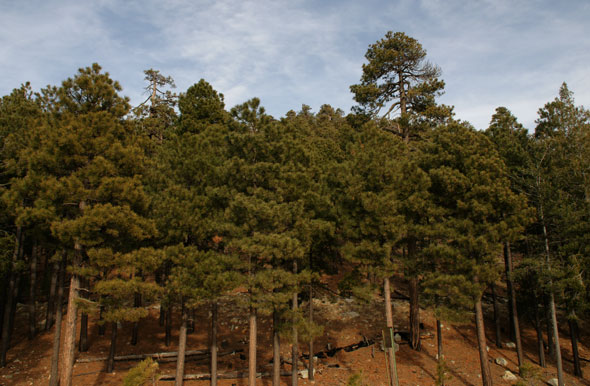 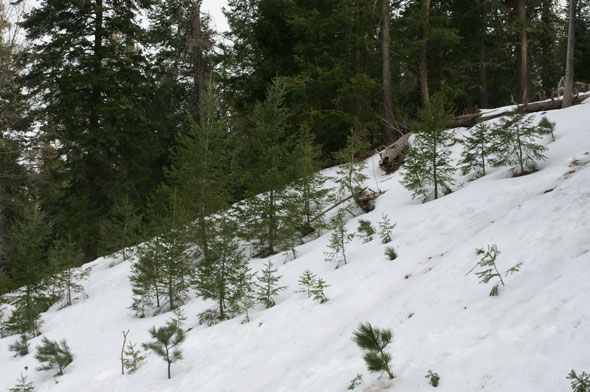 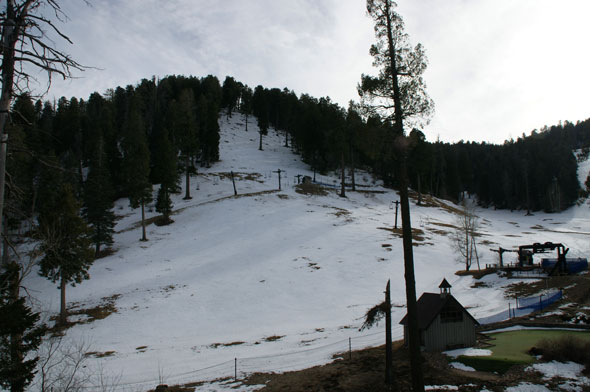 Mt. Lemmon Ski Valley. I'm not a skier, but I would say there was not enough white-stuff to ski... but if you have breakfast at the lodge, you get a free scenic ride on the chairlift. There is also a very small little town,Summerhaven, at the top of the mountain. I would say about thirty snow-lodge-type vacation homes and a few shops and restaurants. Year-round population: 40. 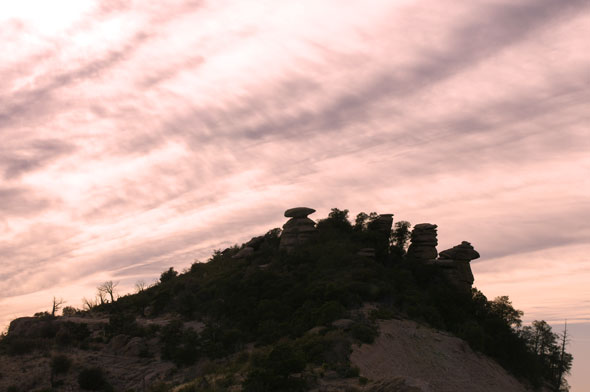 Cherry on the Sundae? 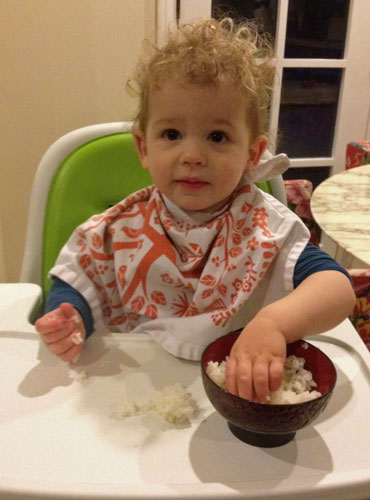 Still full from our late large lunch, we will remain in this evening. Shabbat Shalom from our motorhome! Until my next update, I remain, your happy correspondent.