Portland, Oregon: Y'all know when your spouse says, "honey, I bought tickets to a charity auction" and you get a sinking feeling in your stomach, remembering past events by the rubbery chicken, conversing all night with strangers, and bidding on items you do not want or need? Been There. Done That.

This was exactly my feeling when the event popped-up on our shared family calendar... but this charity auction was for the Ducks, therefore difficult to say no. (Especially for one member of this family.) The auction was to support the Oregon Athlete Foundation, an organization formed to help Duck athletes move from the life of a student/athlete to the life of someone who has to use their degree to get a job. Say a recently graduated tennis player is considering law school, but isn't sure. The foundation can get her in touch with another Duck alum who is a lawyer. They can talk. The foundation can help to make a connection between the graduate and the real world, and though new, but they have already had many successes.

So, we were happy to attend - especially when we learned the very popular ex-Duck football player, Haloti Ngata, would attend and perform Polynesian dances with his friends. Mr. Ngata (pronounced naw-da), was picked in the first round of the 2006 NFL draft, and now plays for the Philadelphia Eagles. There is a long history of Polynesian players on the University of Oregon football team, and Mr. Ngata is proud to celebrate, and share, his Tongan heritage. Haloti Ngata operates the Ngata Family Foundation, a group providing SAT study classes for Utah high school students.

We joined Mary and Steve at a suburban hotel ballroom, for what turned-out to be a very fun evening. 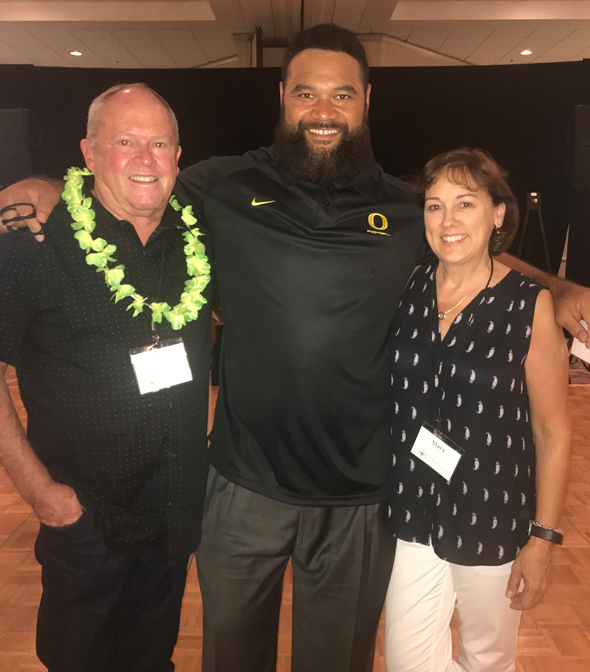 There was a cocktail hour (how else can you get people happy to bid on auction items!) and a buffet dinner that did not include rubber chicken. Instead the food was Polynesian - Huli-Huli Chicken, pulled pork, brisket, salads, and fried plantains. The dancers - friends of Mr. Ngata from Utah and Arizona - performed during dinner. 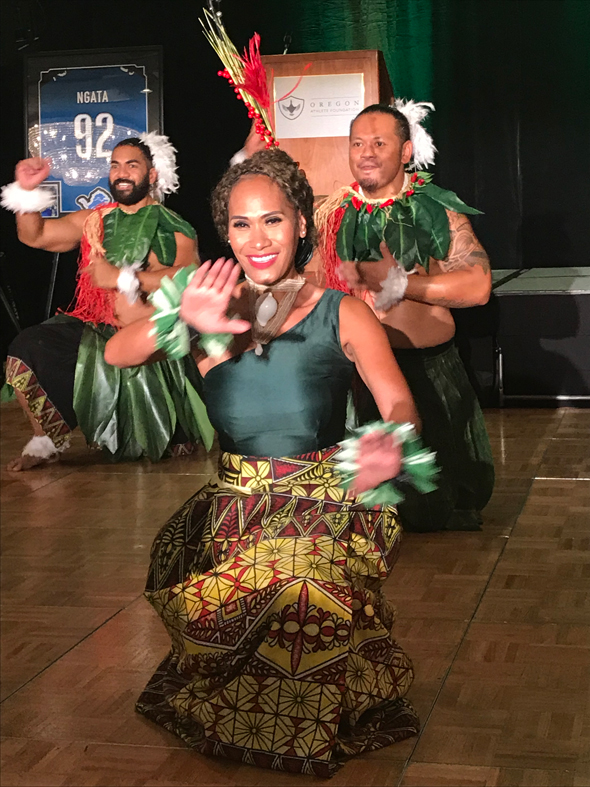 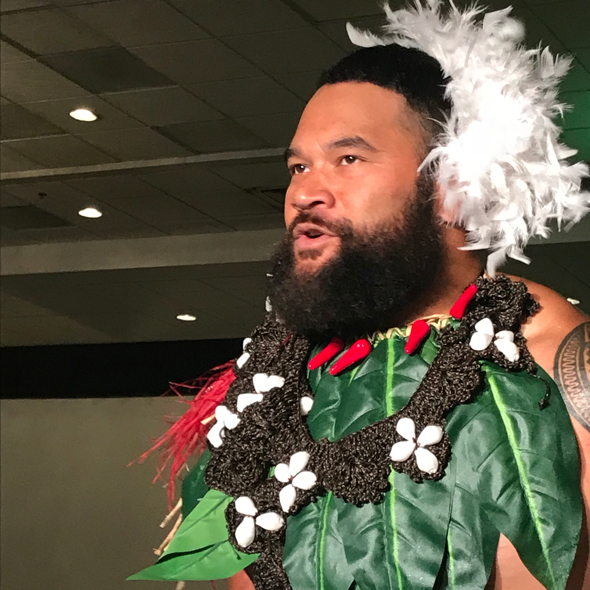 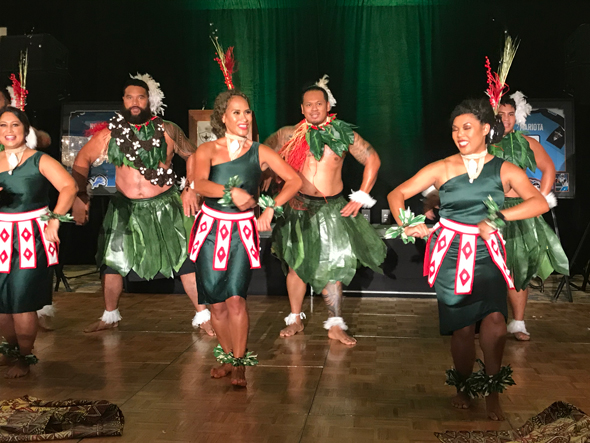 And then, the moment we all waited for: the Haka! The traditional dance of the Maori people of New Zealand, the Haka is performed before wars and before weddings... but is known currently around the world as a dance performed before an athletic event (hugely popular with Rugby) to psych-out the opponent.

How'd ya like to meet Haloti Ngata across the scrimmage line from you? 345 pounds of muscle. I'd be psyched-out all right... except Haloti Ngata is as sweet as a kitten... well, maybe not all the time:

Wow! At the end of the show, the male dancers had huge red welts on their chests and thighs from all the slapping. Mary and I were nearly trembling, as Haloti was two feet in front of us. Very powerful! 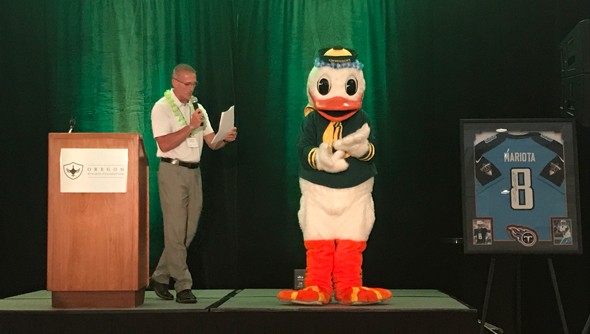 Then it was time for the auction. The Duck was going to act as the auctioneer, but he doesn't speak, so a professional was brought-in. So many ex-athletes had donated items for the foundation auction. Marcus Mariota, now quarterback for the Tennessee Titans offered a framed/signed jersey and the opportunity to attend a game on the sidelines. Ashton Eaton donated a pair of signed spikes (these are racing shoes, people). There were several signed jerseys (Ngata, Kenjon Barner), signed shoes, art work, services, cases of wine, sports memorabilia, behind-the-scenes at baseball, basketball and football events - some including hotel packages. Very nice stuff.

But, I suggested to My Driver that we not buy anything (down-sizing and all that). I suggested we just go home and write a donation check to the foundation instead. As much as I adore Marcus Mariota, a gigantic framed jersey does not fit-in with our down-sizing plans at all. But then... we decided to bid for and "experience" instead: the opportunity to go behind the scenes at the ESPN studio in Los Angeles with (Duck alum) Neil Everett, and view a live taping of the ESPN Sports Center show. The certificate is good for a year, and it's not like we are never in Los Angeles. Dave and Lenny can share this "donation" together.

A great night. So much fun and so much money raised.

Until my next update, I remain, your GO DUCKS correspondent.
« We Are Home Surprise Birthday Weekend »