Pendleton, Oregon: As I often do, I am naming this little road trip after a Jimmy Buffett song. This time, Take the Weather with You, a 1991 Crowded House song that Jimmy sings. Whatever. We are expecting some weather on this trip. Hot weather. Freezing weather. Everything in-between weather.

In reality, this isn't a vacation. It is blind delivery. And by "blind", I mean of the "mini-blind" variety. In this instance, wooden blinds. For a four bedroom, two-story home. 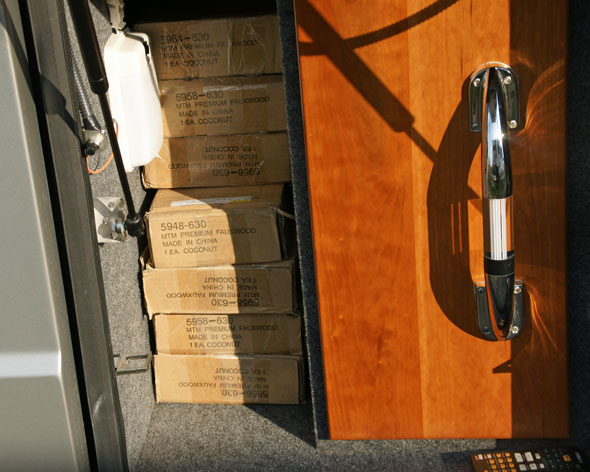 This is just a small part of our delivery

Why, you may ask? Steve & Mary's #3 child, Chris, has recently relocated from his job (he is in green energy) in Abu Dhabi, United Arab Emirates, to Provo, Utah. Chris bought a house. He ordered wooden blinds for his windows. He accidentally shipped the blinds to his billing address instead of his new home address. Since Chris has been living overseas, his billing address has been his Mom's house down the hill from us. To make a short story long... we were going to visit Chris in Provo during this trip, so we are schlepping the blinds along. Meanwhile, Chris is living in a house with no blinds. I would laugh at him, since he is freak genius with an engineering degree from Purdue... except I do crazy stuff like this all the time. Glass houses... throwing stones... especially if your glass house has no curtains.

Being that we are such nice people, we will probably help him install the dang things too.

And, so we hit the road, heading east along the beautiful Columbia River Gorge, one of the prettiest drives in America! It is a bit stressful driving through Portland, but once we escaped the city, the traffic eased and we decided to make lunch camp at the fish hatchery at Bonneville Dam. This is just a great stop - plenty of RV parking, shady picnic tables, pretty paths and flowers - and a fish hatchery. We had a sandwich (grilled tarragon chicken on brioche... you know, regular old camping food) and took a spin around the hatchery. 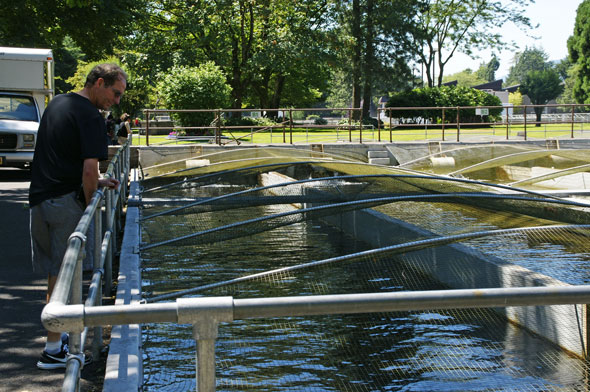 Over 11 million salmon are raised and released annually at this facility. It is an amazing process - actually involving "milking" the males for their sperm and actually KILLING the females for their eggs. (Salmon spawn and then die, so technically it is only speeding up the process.) I don't want to get into the politics of the hydro dams getting in the way of all this occurring naturally, since I am sucking up about a gazillion kilowatts doing this blog post, am generally against flooding and I had salmon for dinner last night. 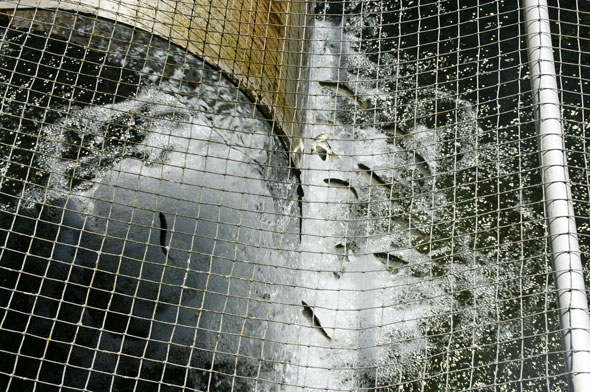 Nature or nurture, these fingerlings know instinctively what they are supposed to do. 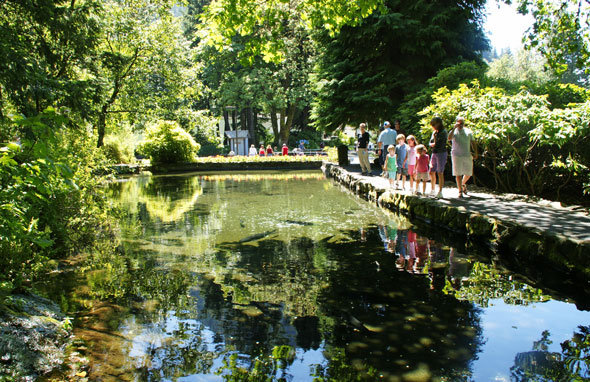 There are several ponds with rainbow trout and sturgeon. You can purchase a handful of fish food for a quarter and toss it into the ponds. 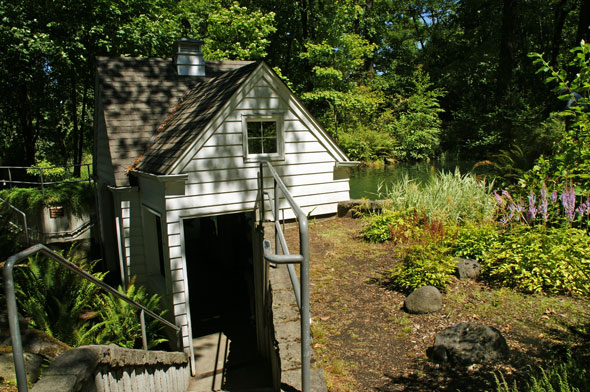 The hatchery has a under-water viewing room where you can get up-close and personal with rainbow trout and sturgeon. 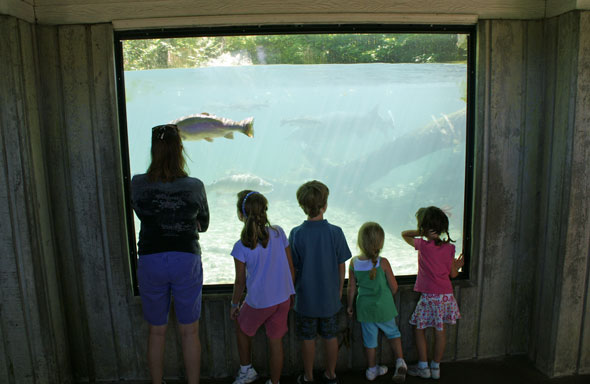 The large fish in front of the window is a rainbow trout! 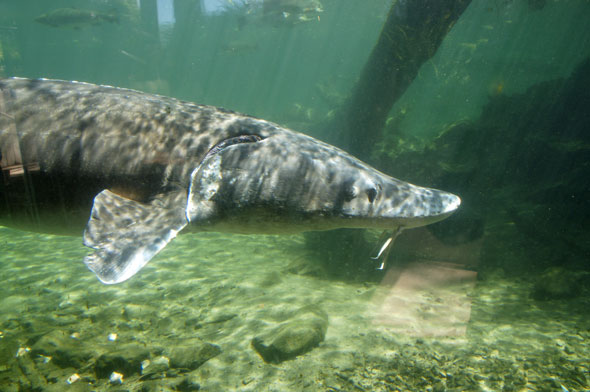 And this is Herman the Sturgeon. Herman is a White Sturgeon over 70 years old. He is ten feet long and weighs over 450 pounds! Sturgeon are from the Jurassic era (100-200 million years ago). There are twenty-three species of sturgeon world-wide and the most common White Sturgeon live below Bonneville Dam. White Sturgeon can live for hundreds of years and reach 20 feet and 1800 pounds.

And so we arrived in 90-degree Pendleton, Oregon. The air is smoky due to brush fires in Central Washington, so I suppose we will have a beautiful sunset. 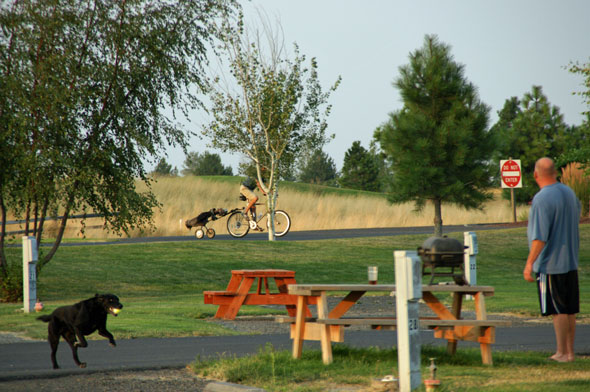 The photo (above) is very busy. We were watching our neighbor throw a tennis ball over and over and over and over with his beautiful black lab... when we both noticed this dude riding his bike from the golf course, dragging his golf bag along. Clever. 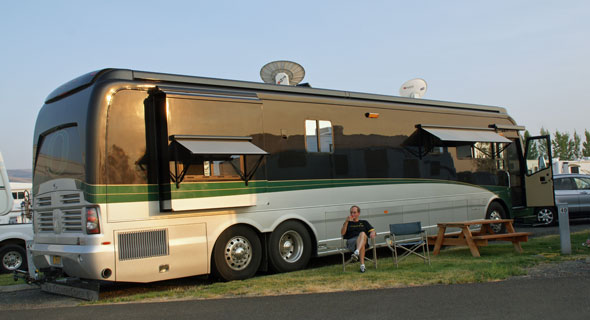 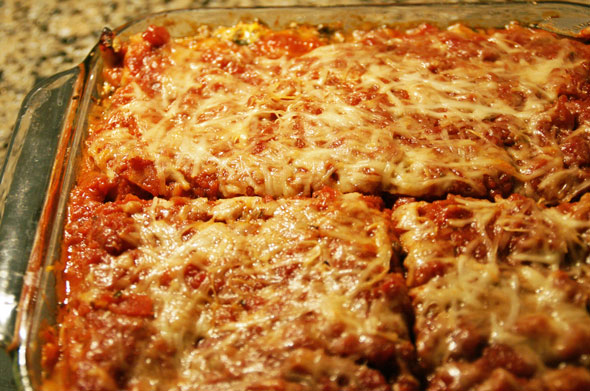 Good thing he brought me along. 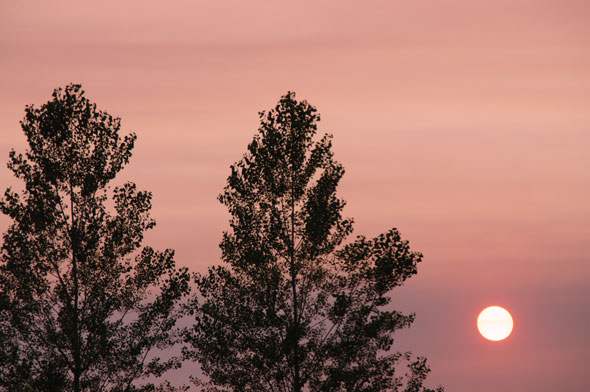 After dinner, DT took my camera on a sunset safari. Pretty!

Until my next update, I remain, your Eastern Oregon correspondent.