I don't suppose we were the only family in America tonight dining on fat-laden snacks during the NCAA Men's Basketball Championship game. I used this culinary free-pass to use-up a bunch of left-overs in our fridge.

To make our nachos, first I lined a baking sheet with parchment paper and heated the oven to 400°. Next, I spread a layer of corn tortilla chips (Carmen's from Eugene, Oregon) across the center of the parchment and sprinkled a little cheese over the chips. I used mozzarella because it was in the house. Then, a little of those black beans from dinner Friday, topped with another layer of chips, handfuls of shredded roasted chicken, shredded cheddar and chopped tomato. 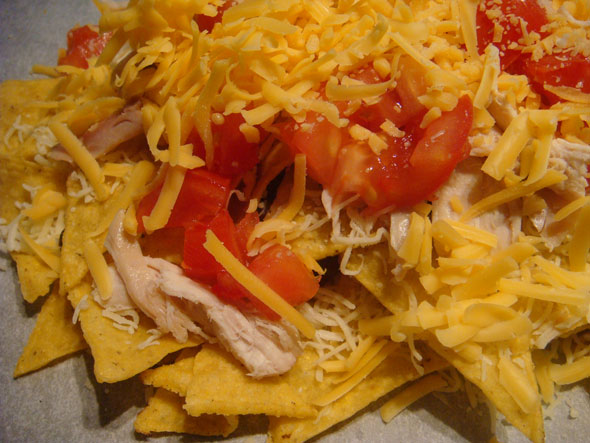 The nachos baked in the oven for about eight minutes, until everything was melted, then I turned the broiler on over the entire mess until the cheese was bubbly and brown. Immediately after the nachos were removed from the oven, they were topped with fresh salsa, sour cream, guacamole, sliced black olives and plenty of chopped cilantro. 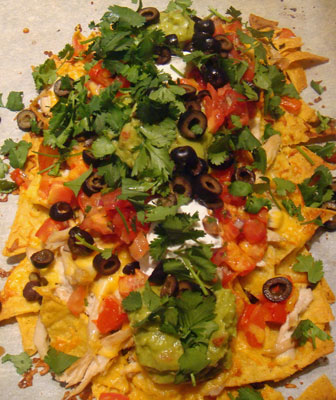 Mother Lode of Nachos, ready for the Big Game 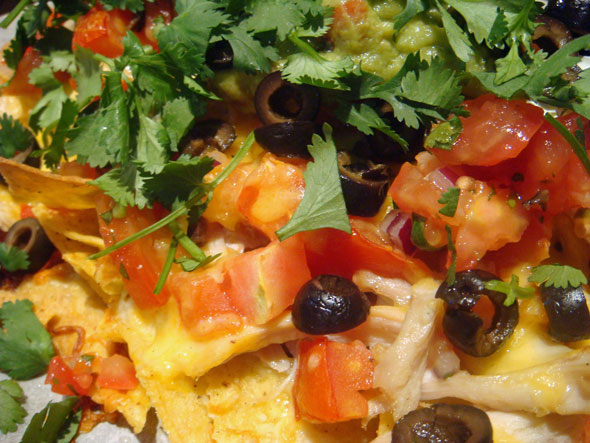 Doesn't that look better than those awful chips covered in that disgusting melted plastic "cheese" they serve in sports stadiums?

She shoots; she scores: since the pan was lined with parchment - no dish washing required!