Track Town, USA: Friday the 13th must not have been on the University of Oregon calendar, as they had plenty of luck on the track today in Eugene. 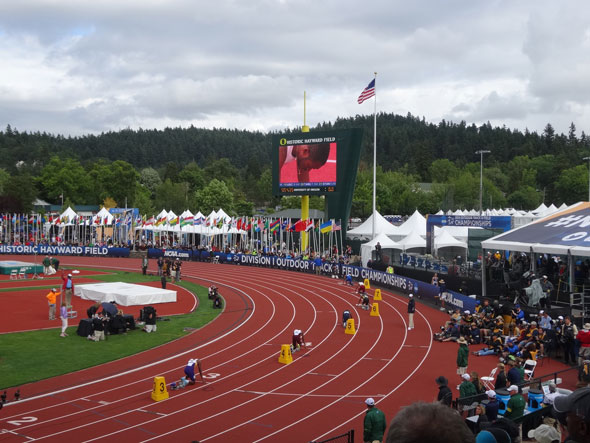 Even the nasty weather took a break in the afternoon when it was time for the races.

In addition to the Lucky Ducks, we witnessed a Junior World Record! 18-year-old Baylor freshman Trayvon Bromell, ran 9.97 to win the 100m.

Trayvon Bromell at the tape

Senior, Laura Roesler won the 800m, Phyllis Francis took second place in the 400m and Jenna Prandini was 3rd in the 100m - racking up more points for the Oregon women. The Duck women head into the final day of competition with 43 points. Texas A&M is close behind with 41; Texas and Florida are tied for third with 29.

In one of the most exciting 5000m races ever held at Hayward Field, Lawi Lalang (Arizona) beat Oregon's Edward Cheserek at the tape to win in 13:15.36, breaking the NCAA meet record set by Sydney Maree (Villanova) in 1979! This was Cheserek's first loss of his freshman year, having won the NCAA Cross Country title, indoor 5000m and 3000m races and the 10000m outdoor championship Wednesday. Oregon runners, Trevor Dunbar and Eric Jenkins were 3rd and 4th, giving the Duck men 19 points in one race! Oregon senior Mike Berry took second in the 400m and the Duck men finished the day leading the competition with 53 points. Florida is in second place with 28 points... with the ability to easily make up the difference with favored athletes in several races tomorrow. 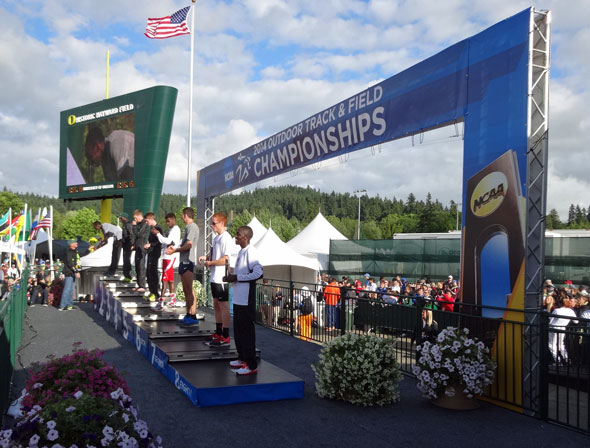 After the races, women and men who used to run for the University of Oregon gathered in the Ford Alumni Center for the annual Lame Duck Reunion. All past Oregon track team members are eligible for membership into the Lame Ducks club - and they can bring a guest to the reunion, so I was there as well. It was another fine flocking, with good food, good wine and good times. Possibly a few tall tales were told. We had a few speakers - from 800m racer Elijah Greer who graduated last year and attending his very first Lame Duck Reunion, to famed distance runner and sportswriter, Kenny Moore, who has been a Lame Duck for over 40 years. Our own DT spoke, reminding members to dig deep into their pockets and donate to the University of Oregon. Dave had a list of American sub-four milers and asked anyone with a mile time under four minutes to stand, and it was amazing how many men stood! 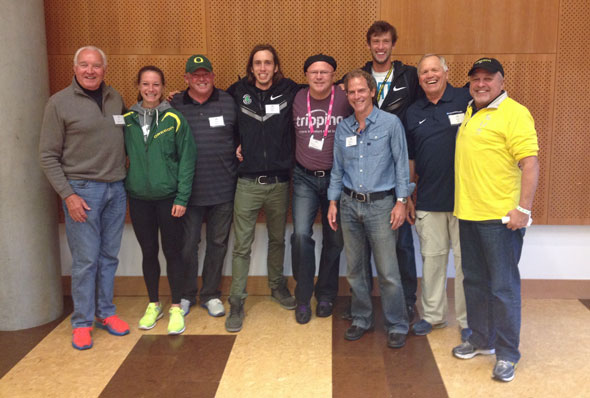 The 800m racers in the room gathered for a photo. Someone asked who had the fastest time. Elijah Greer answered, "Andy. For now."

Until my next update, I remain, your optimistic correspondent.