Merced, California: Tonight I am not going to bore you with chatter and get right down to posting photos of our day. First things first - Cousin Susan and her family left today and are on their way back to New York. We were very sad to see them go, so to make ourselves feel better we headed 40 miles up the hills (toward Yosemite on Highway 140) to attend the Mariposa Butterfly Festival. 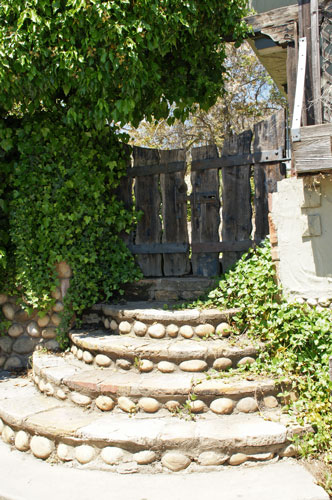 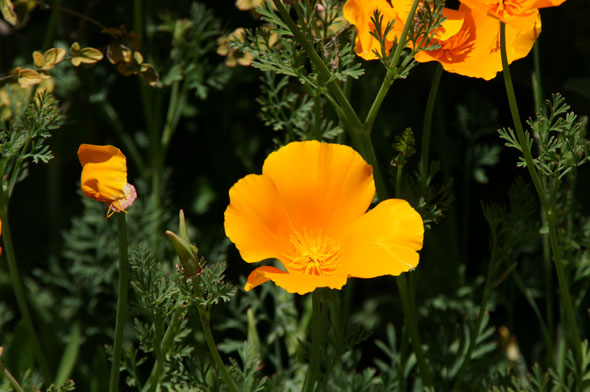 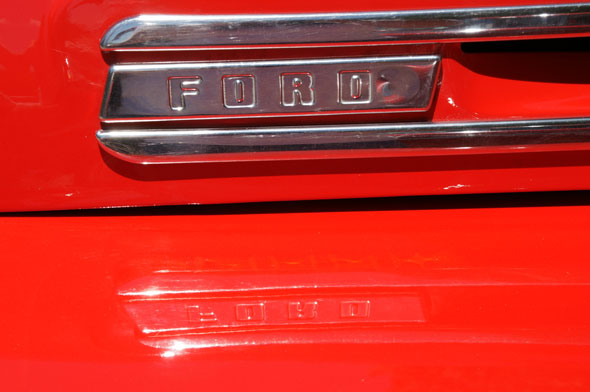 And, if you can believe it - there was another Street Rod show in Mariposa today. 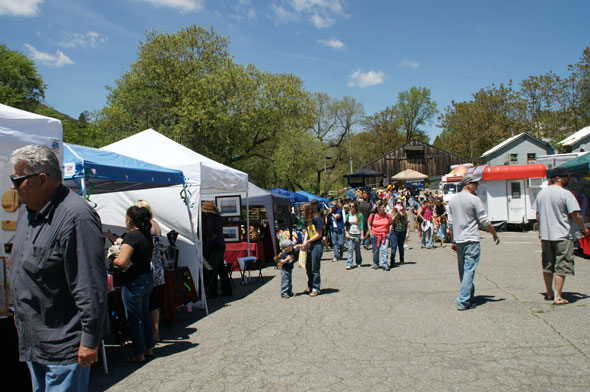 The Mariposa Butterfly Festival is always held the first weekend in May. They have craft booths, live music, food vendors, art, a parade, butterfly costume contest, activities for children and they release "thousands of butterflies" into the wild.

Oh, by the way, the Spanish word for butterfly is "Mariposa". 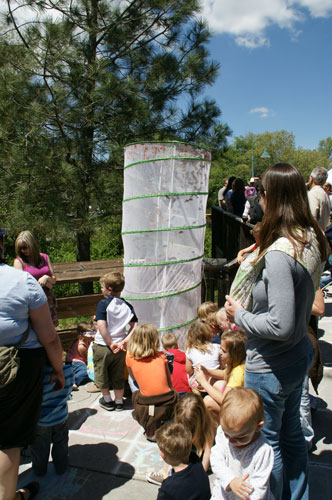 The butterflies are hatched on a butterfly farm and moved to giant netting tubes during the festival. 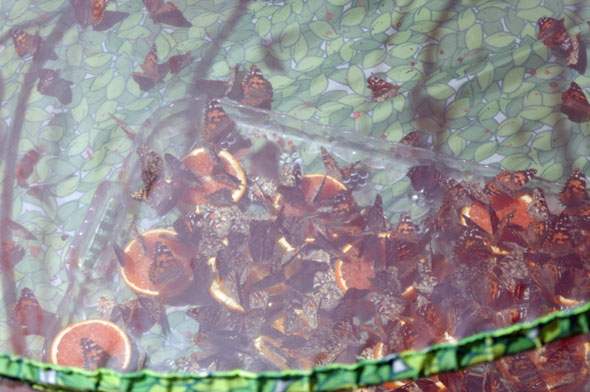 While awaiting their release, the Monarch butterflies stock-up on sweet energy for their migration by chowing-down on sliced oranges. 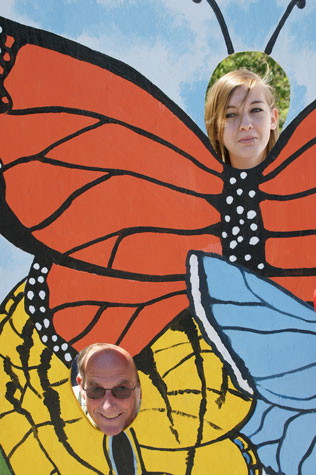 We walked through several festival areas and had a nice lunch. Our niece, Aleria, and her Uncle Dave explored their inner butterfly. 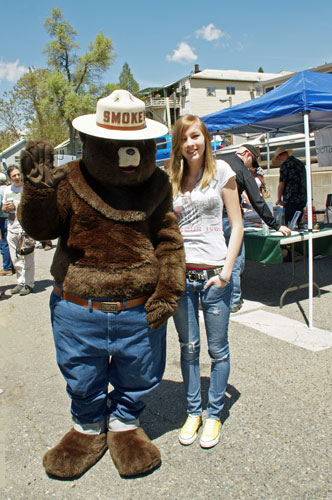 Aleria made a new friend. 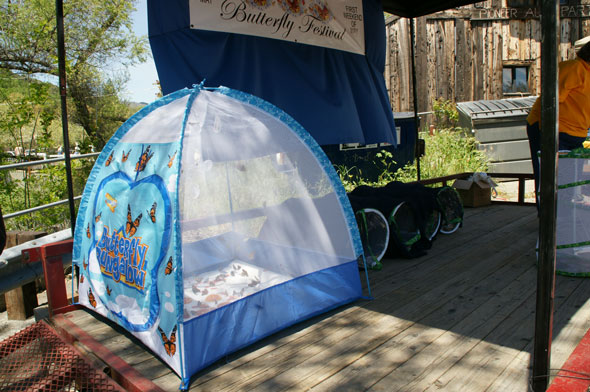 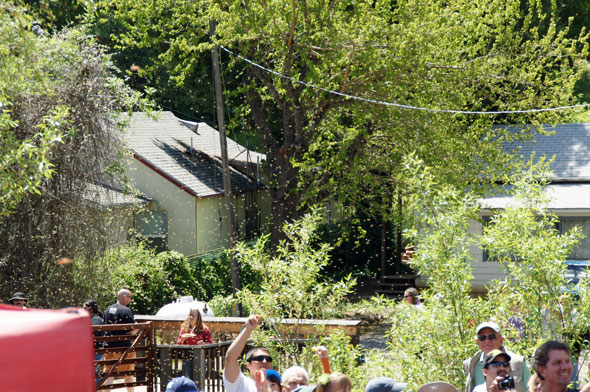 Instead, I have this photo - the sky darkened with thousands of bees! Yes - an entire swarm of bees came sweeping through the festival just as the butterflies were released. We didn't stick around, and instead moved very quickly to the bandstand in the city park to listen to Steve Johnson and the BOBtones. 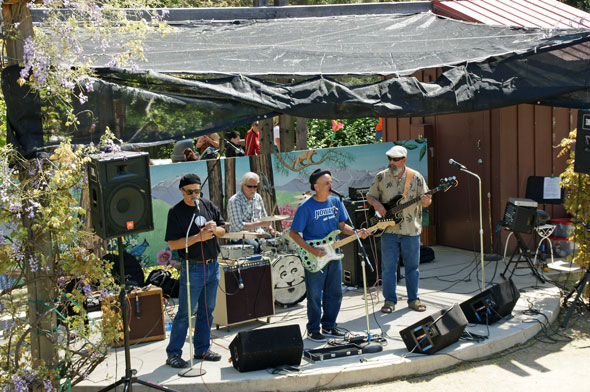 Steve Johnson is a New York City-based blues artist originally from Merced. He and DT are high school classmates. 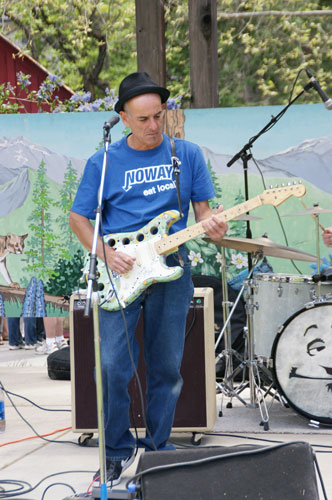 Steve comes back to his hometown each spring to play a few gigs with his old friends in a band they call The BOBtones. 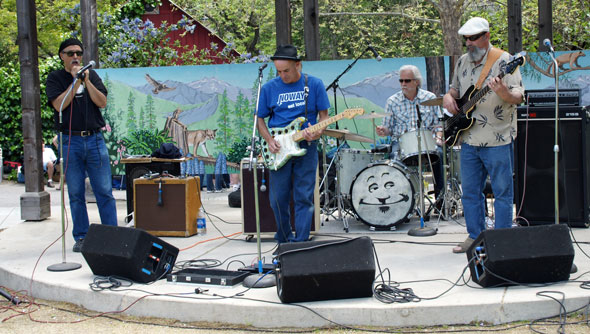 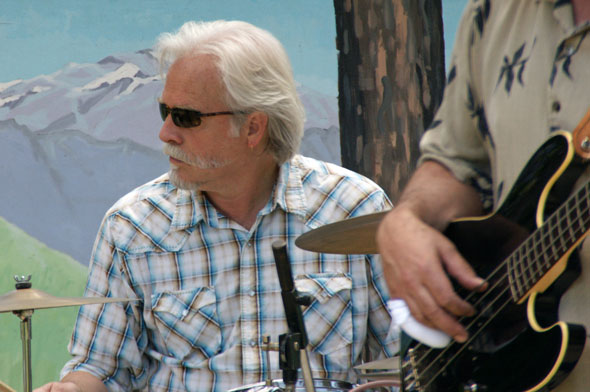 Sure enough - it's Brother Billy. 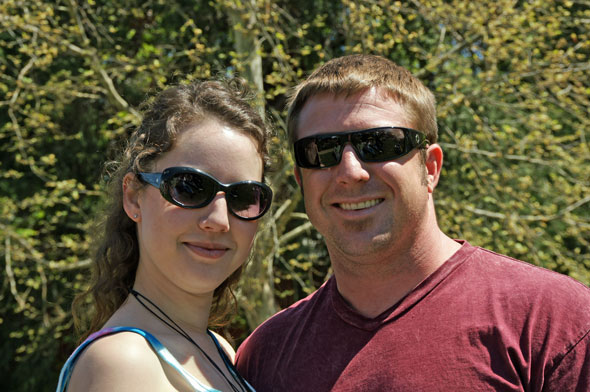 Our niece, Meghan, drove up to Mariposa (with her boyfriend, Joe) to watch her dad play the drums.

The weather was perfect, the music was great and we had another fun day with DT's family in California. Until my next update, from San Francisco, I remain your Mariposa correspondent.

RV Park:  Castle Air Museum Family Camp (in Atwater, California). The only game in town. We always stay here. It actually used to a a parking lot - but the Air Museum added eight 50-amp full-hookup campsites. It floods during a rainstorm. No bath house. No wifi. We love it here. Dogs allowed off-leash. Very casual. Quiet.
« Family Firsts The Road to San Francisco »