Indio, California: My Baby Brother and his wife, Kris, are visiting from Colorado. They usually visit for a week every year and we have enjoyed the best weather during their stays… until 2019. Dang, with the Winter Vortex messing-up air traffic across the country, they arrived into Palm Springs airport hours behind schedule Thursday night… and they left snowy Colorado, only to land in rainy Palm Springs. Pouring rain!

Things were a bit better in the weather department Friday and we were all able to workout before making the most important stop – lunch at Tacos Gonzales: 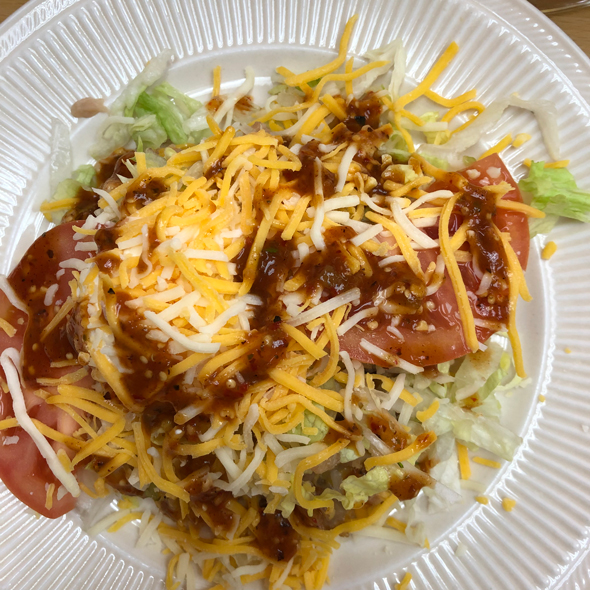 Chicken Tostada (I added all the spicy salsa)

More touristing and eating commenced in the evening. DT grilled chicken and I made a salad and my famous Rosemary Olive Oil and Lemon Cake. 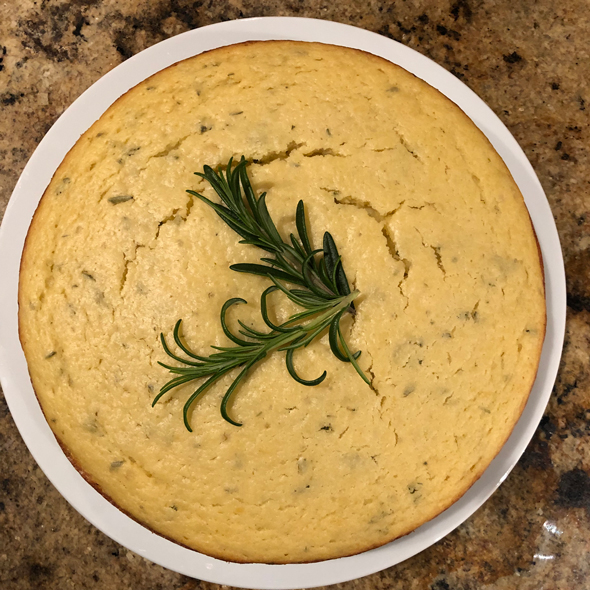 Weeks ago, I had purchased four tickets to the Rancho Mirage Food and Wine Festival, but we woke to pouring rain. Checking the news and the website, it claimed the fest would be held rain or shine… probably an easy assumption in the desert.

We loaded up with rain gear, jackets (it was cold) and umbrellas, and discovered the festival had erected a massive tent over the vendors. Whew! 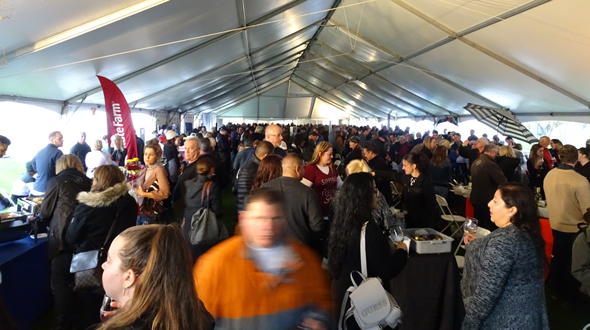 While the tent did keep out the rain, it became a crowded mass of humanity fighting for a glass of wine or a sample of food from a local restaurant. So congested! 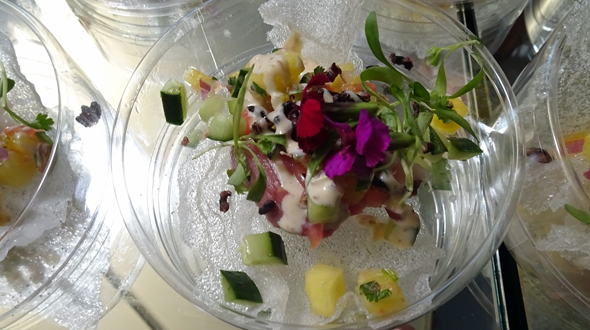 Yellowtail crudo from the Marriott hotel

The few things I tasted were amazing – including duck tacos from Sammy’s. Super difficult to get close enough to anything to photograph – not to mention it was so dark inside the tent.

Arriving back to our campsite to watch the Duck basketball game, it was decided no one had enough food, so I whipped-up a veggie pizza and a salad: 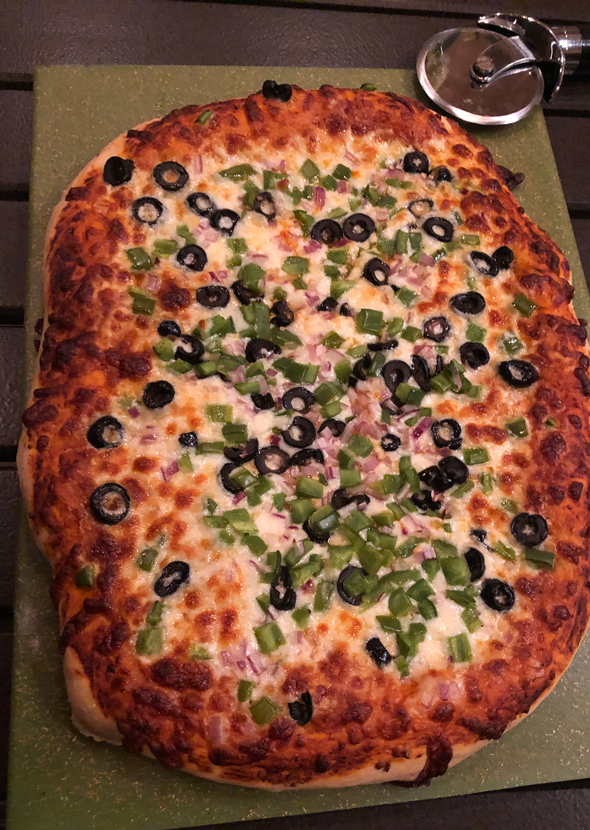 The Ducks lost to Colorado.

Sunday morning greeted us with warm sunshine! Good thing as we had booked a table for four at the Empire Polo club for the two afternoon matches. 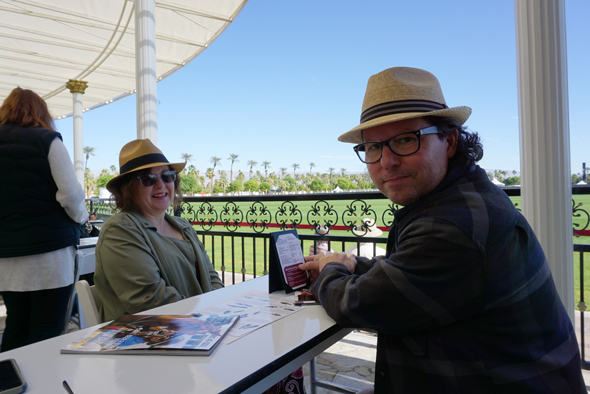 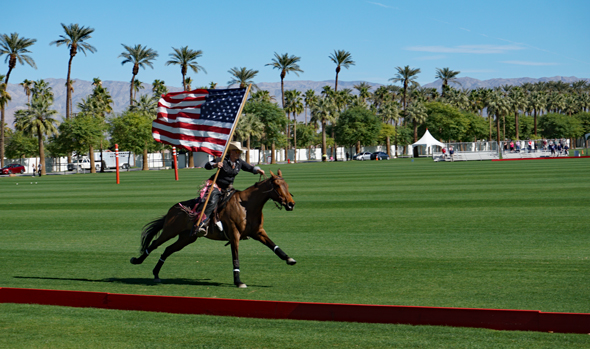 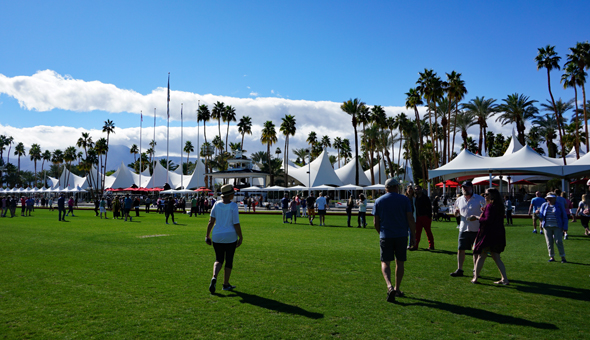 Between matches, guests are given a flute of Mumm champagne as they enter the polo field to “stomp the divots” made by the horses. 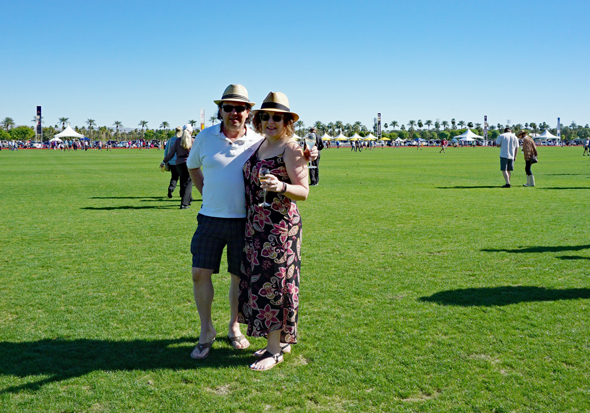 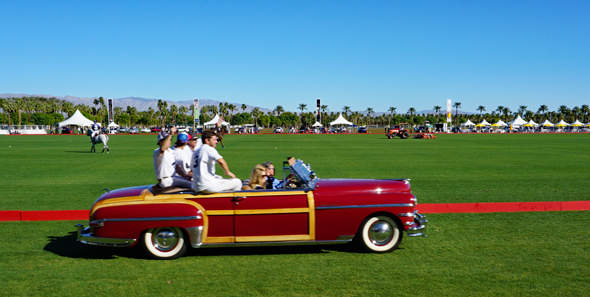 Winning team arriving to the awards stage for trophy presentation

As soon as the matches ended, we went directly back to the casita to watch the Super Bowl. I had made a few snacks to tide-us-over, and we watched a very lackluster football game (but a few good ads). Having no allegiance to either team makes for a more relaxing evening, but dang, that was one boring game.

The weather is not supposed to improve. Tiring of rain, Mother Nature is going to give us a wind storm.

Until my next update, I remain, your “bad hair week” correspondent.