Denver, Colorado:  Dave and I slipped out of stormy Portland and flew to Denver this morning. Something about Jimmy Buffett playing at Red Rocks Amphitheater. An opportunity I certainly did not want to miss. Conveniently enough, my Brother Steve lives in Denver and is a bigger Parrothead than me. Which is really saying something. 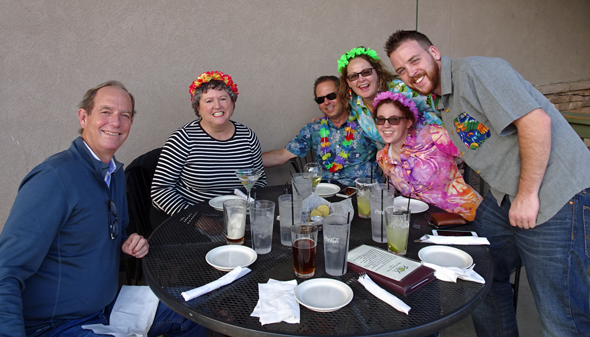 A quick snack (pre-functioning) before heading out to the show:
DT, me, Brother Steve, his wife Kris, and their kids, Delaney and Michael.

My Baby Bro (I am the eldest of five; Steve is the youngest) arranged for a car and driver for the night. It was nearly 70 degrees in Denver when we landed, but at this elevation (6400), we knew it would cool-off. I wore three layers - and brought a jacket - to this tropical concert! 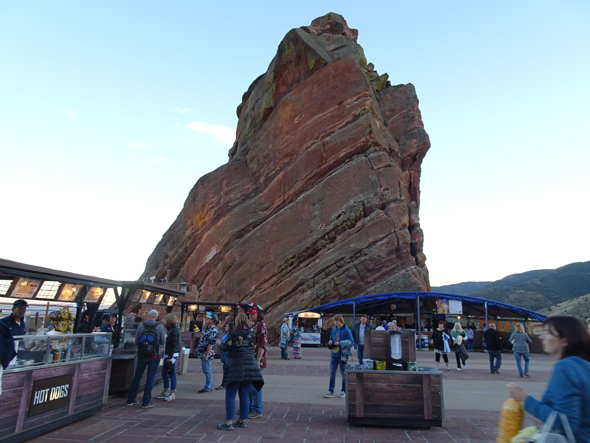 Completed in 1941, this venue is an amazing work of Mother Nature, the CCC's and the WPA. The 9000 seat amphitheater is virtually carved in stone - with beautiful views over Denver. 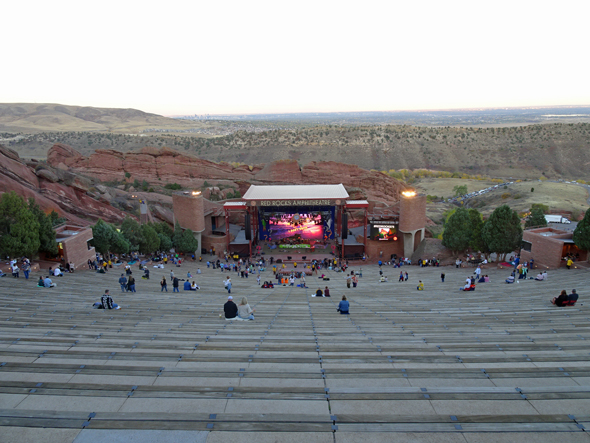 From the top, with a nearly full moon tonight, it's like standing on top of the world. 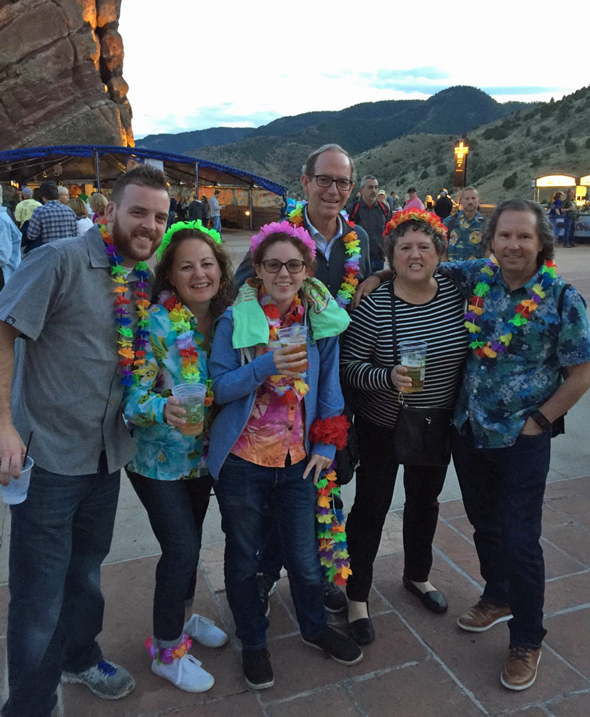 Aren't we just a bunch of posers? 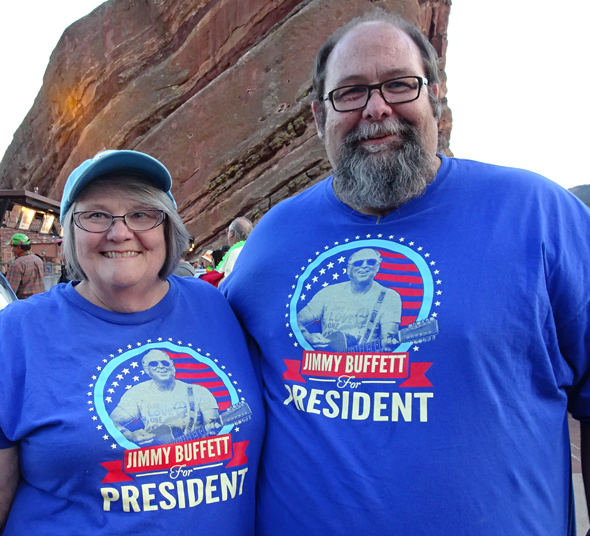 We saw this couple and I asked for a photo. Maybe I should rethink my vote?
What would Buffett's campaign offer? Mandatory flip-flops in all schools? 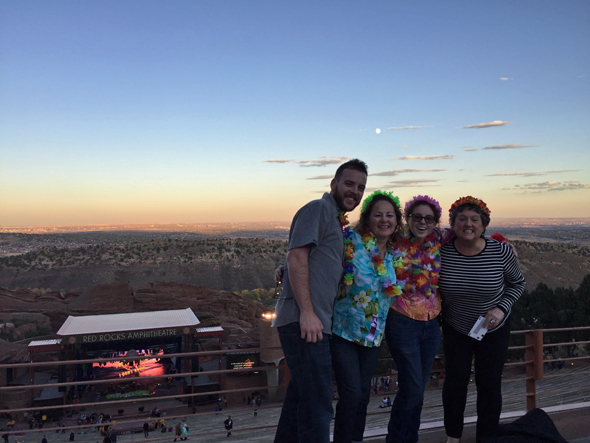 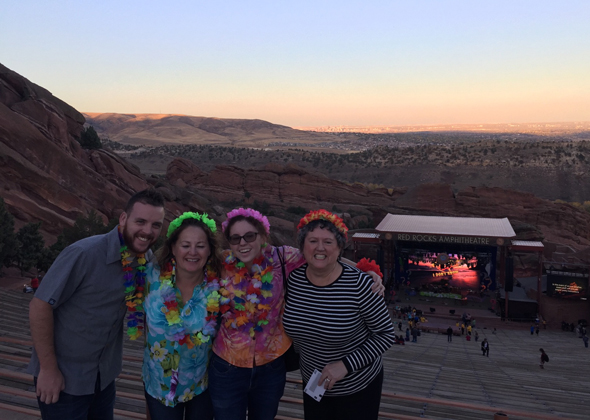 When Kris was very pregnant with their daughter, we had all dress-up and were off to some sort of charity gala in Portland. We were in the living room of Lisa's godmother, Nancy, before the gala, and somehow started talking about what they were going to name their baby. (I can't remember exactly, but I think Steve and Kris were going to name her Melissa or Melanie? Kris will correct me.) Jimmy Buffett had a new song about his daughter, Sarah Delaney, and they both liked the name Delaney. Nancy suggested "Delaney Kristine" and there ya go! True story. Nancy loves to tell the story of Delaney being named in her living room. Our niece will be 22 in December.

Jimmy has a song named "Delaney Talks to Statues" and would you believe he sang it tonight? He rarely, rarely, rarely sings this song in concert. Planets aligned much? You know we were all crying like babies.

Another great Jimmy Buffett concert in the books, and what an amazing venue. We are so happy to have experienced this evening with My Brother and his family.

One more thing: There is a new member of the family. Steve and Kris adopted a rescue pup whom they have named Hashtag... but, just like Prince, Hashtag's name is not written in letters, but with a symbol only: #. Too funny. 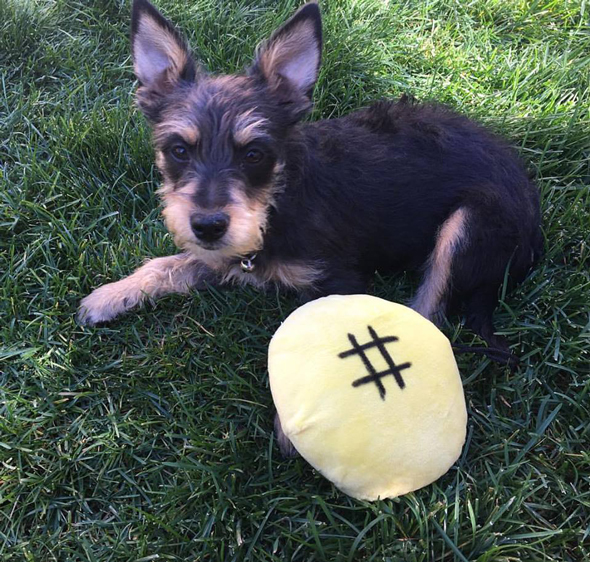 Until my next update, I remain, your Red Rocks correspondent.
« Borrowing from Recipes Viva Las Vegas »