Dave and I stayed in four hotels (in four countries) on our trip through Asia this summer. Below, find my reviews of the properties. 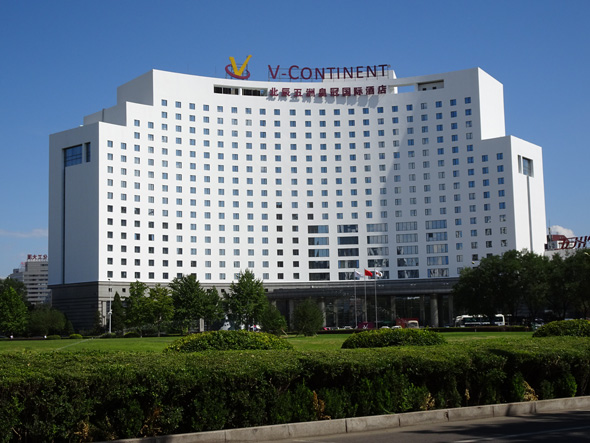 This hotel has only two things going on. Location - it is a ten minute walk to the Bird Nest Stadium and next door to the Convention Center - and the breakfast buffet (included in our room rate) is simply amazing. Other than that? Nada. 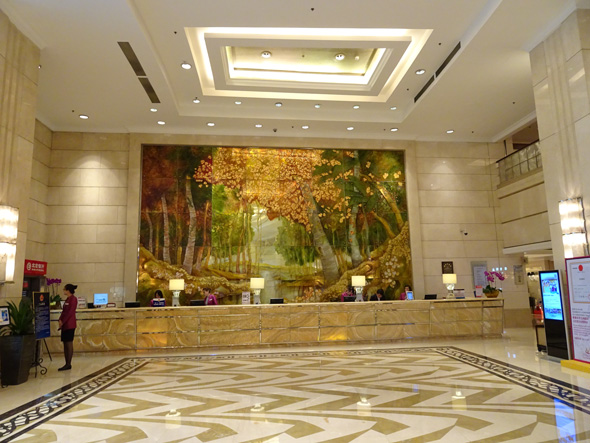 After entering the pretty and spacious lobby, we had to deal with complete inept counter service. Our reservation was part of a group and was not made directly by me. When we approached the counter (oh, just imagine how tired we were), the hotel did not have a room for us. This was going to be a problem as the hotel was, of course, completely sold-out due to the track meet being held down the street, and we had tickets for said nine-day track meet. We explained that we were with a group and maybe our room was held under the group name? The list! The girls brought out a list for our group, looked it over and proclaimed our name was not on the list... when we could clearly see that our name was on the list. My name, Dave's name, with a request for a King bed. The girls repeatedly explained to us that our name was not on the list. We pointed to our name on the list, alphabetically in the "T's" where we should be. There was some discussion amongst themselves in Mandarin, much of which I could not understand. Seems we did have a room, but it had two beds. Fine, we said (assuming it meant two Queen beds, but at this point not being too picky), but we wanted assurance it was a non-smoking room. Oh, yes, of course, our entire hotel is non-smoking. 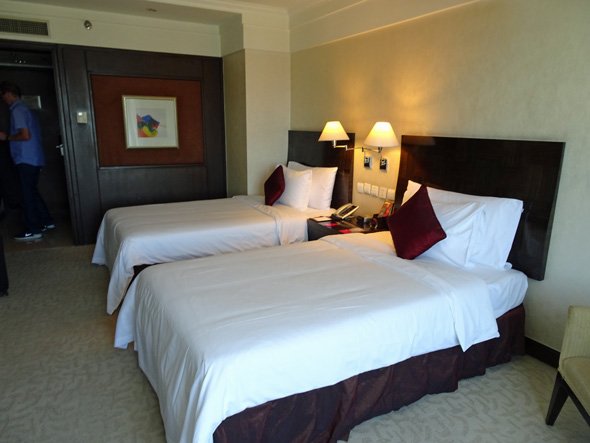 Our two beds were twins and someone had been chain-smoking in our non-smoking room for about 10 years... probably due to the fact that our non-smoking room came equipped with an ash tray. Everything in the room was so worn. The carpet and the upholstered chair were disgusting. The shower curtain had mold! Our rate included wifi and it worked most of the time. The Chinese government watches every click you make on your computer, so I installed a Virtual Private Network (Express VPN, $12.95 for a month on two devices) on my laptop and cell phone before leaving for China. I highly recommend Express VPN. Using a VPN allowed me to visit websites China feels "inappropriate", like Facebook, and allowed me to surf, download/send email and publish my website without being spied upon. (NOTE: Somehow the government allowed full internet access within the Bird Nest stadium for all the foreign visitors and dignitaries. How did they do that?) Worst part is the hotel jacked the room rate up to twice the usual for the World Track & Field Championships. We paid $300 per night for this terrible room. We've stayed in $79 motels off a US interstate that were ten-times better than this rat hole. The only thing making the situation tolerable was the fact we were with a group and could commiserate and joke about our miserable situation. I just can't recommend this hotel at all. Do not stay here.

Arriving to the Grand Hyatt Taipei after ten nights in smoky hell was like arriving twenty years into the future of what China could be (or could have been). I chose this hotel based on location. It is across the street (and connected via covered walkway) from Taipei 101 and close to several restaurants we wanted to visit. I had no idea the hotel would be so lovely. 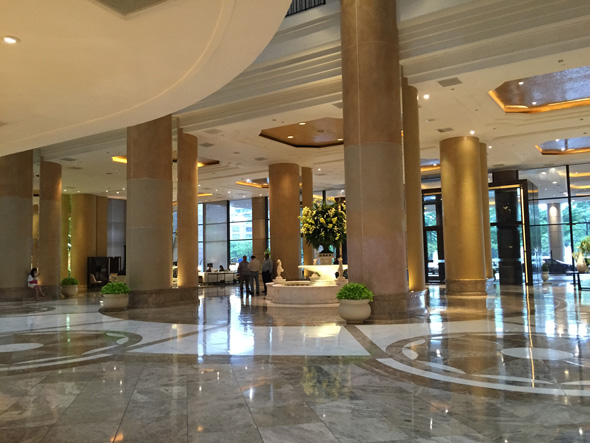 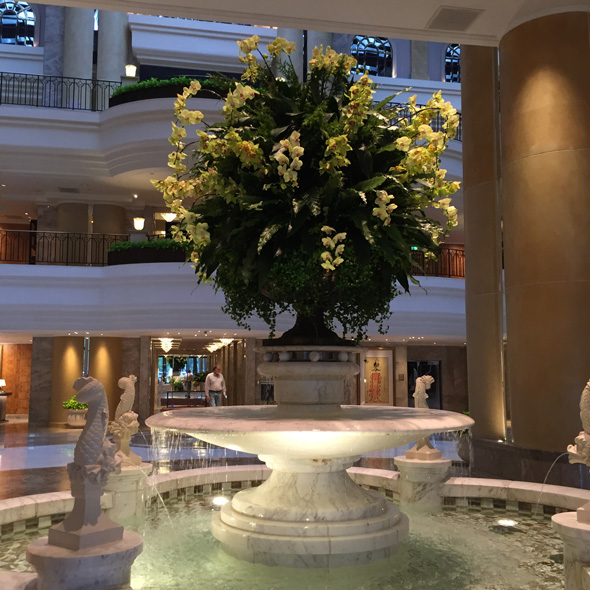 The hotel was like a classy non-smoking Las Vegas. The staff could not have been more professional. Our room was ready. No one had ever smoked in the room and it was spotless. Fancy even. Interestingly enough, this room cost slightly less than the creepy Beijing hotel! We had a view of Taipei 101 from our window, a King bed, comfy sofa, a small dining table, desk with super-fast wifi (included), and a modern tiled bath with separate shower/tub. The room had in-room coffee service, a laptop safe, mini-bar and every amenity. The hotel had a nice cocktail lounge and a good breakfast buffet. There is a very impressive (super-fancy spa-like) fitness center and a rooftop swimming pool. We used the hotel car service back/forth from the airport and one day hired a car/driver from the hotel and were very pleased with both. The car had wifi! I highly recommend this hotel. 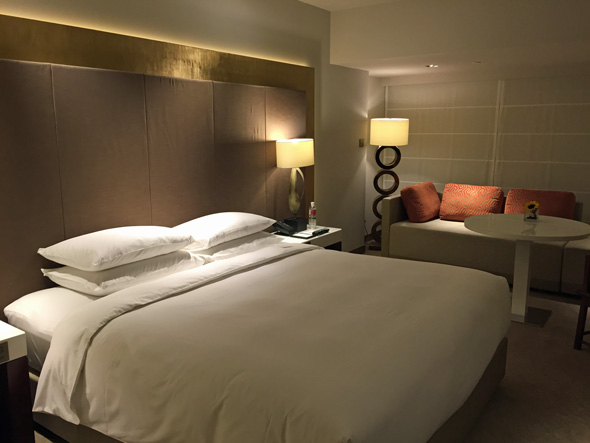 I chose this hotel for sentimental reasons only. There are newer hotels in Manila. Fancier. More expensive. But this is where we stayed during our honeymoon - for weeks while awaiting our household shipment when we moved to Manila in 1980. At that time, the Manila Hotel was one of the nicest hotels in all of Asia, if not the world. I feel the hotel has slipped a bit, but it was difficult to tell as they are under-going a massive remodel. The pool (with its infamous swim-up bar) was drained for repairs. There was some scaffolding. Piles of construction debris covered one parking lot. We had to suffer through a lot of banging and sawing and possibly jack-hammering noise. 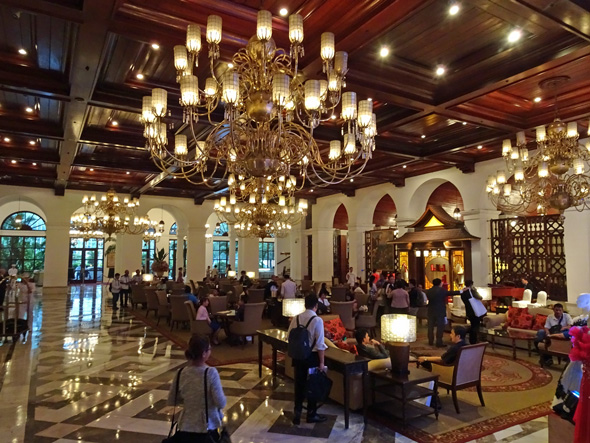 The massive lobby is still impressive. Just lovely. Elegant. Interesting-looking people mingling with coffees or cocktails. Those massive chandeliers! The hotel workers dress in traditional Filipino garb and are so friendly and helpful. 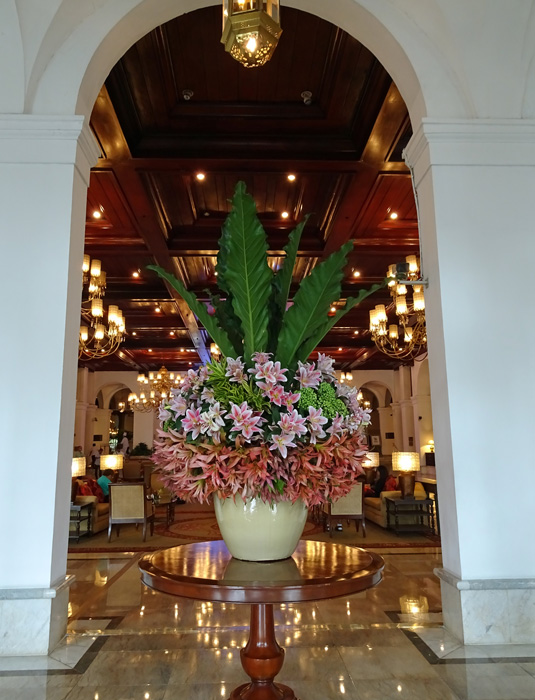 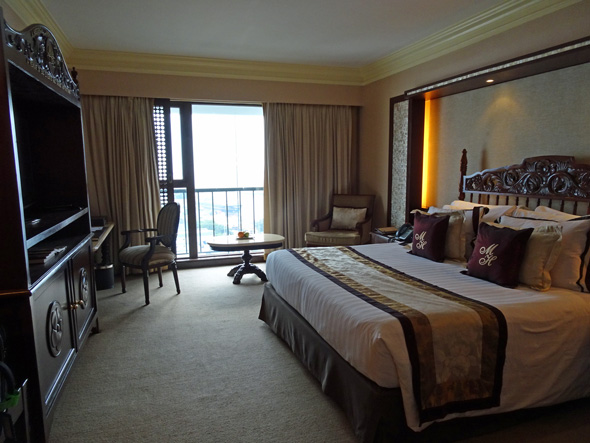 Our room was in the tower, as requested, and was smoke-free and had a King bed. We had a view over the bay (and empty swimming pool), just as we did on our honeymoon. (We think there was a canopy bed then though...?) The bath was tiled, with a separate shower and tub. Laptop safe, mini bar, coffee bar, turn-down service and those lovely old-fashioned buttons to push for DO NOT DISTURB or PLEASE MAKE UP ROOM. This hotel had the fastest wifi of any on our trip through Asia. We dined in the Champagne Room and it hasn't changed - happily. We enjoyed two-for-one happy hour cocktails in The Tap Room bar, but smoking is still allowed in the bar. Non-smoking guests can sit outside in a bar area near the lobby if someone is smoking inside the bar. The main restaurant, Cafe Ilang Ilang, now features a buffet nightly. We went on seafood night and it was pretty impressive. Hotel guests receive a 40% discount on the buffet. We paid $200 per night for this trip down memory lane. I do still recommend this hotel, but only if your business takes you to the old part of town or the US embassy area... or you love nostalgia.

We really saved the best for last. The Langham is simply off the charts lovely. One of the nicest hotels we have ever (ever!) visited. The Langham was also the most expensive (over $400 per night), but we stayed FREE with American Express points. Free is a very good price and I am super happy I used my points for this hotel instead of that crappy one in China. 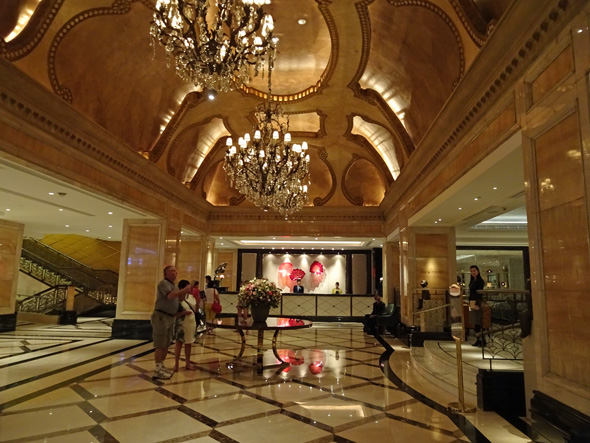 I suppose "quiet elegance" would be a good description of this Kowloon property. It's like stepping back in time to a different era. We arrived well past midnight due to flight problems, but the hotel driver was waiting for us (in a Mercedes) at the airport, our room was ready, our bed had been turned-down. We fell into sleep without really looking around much.

We were so happy to awake in a beautifully-appointed room, pristine in cleanliness, tastefully decorated and equipped with an espresso machine to help us wake up. 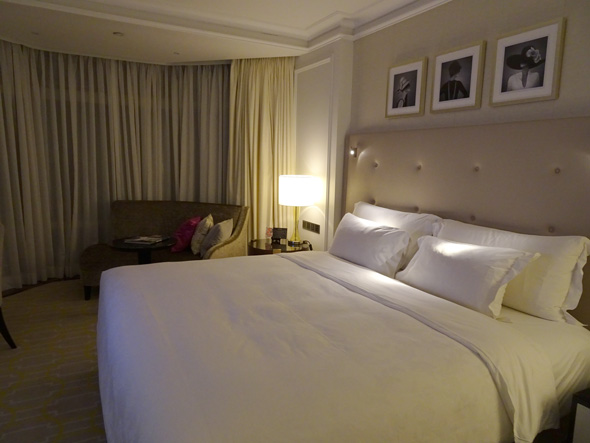 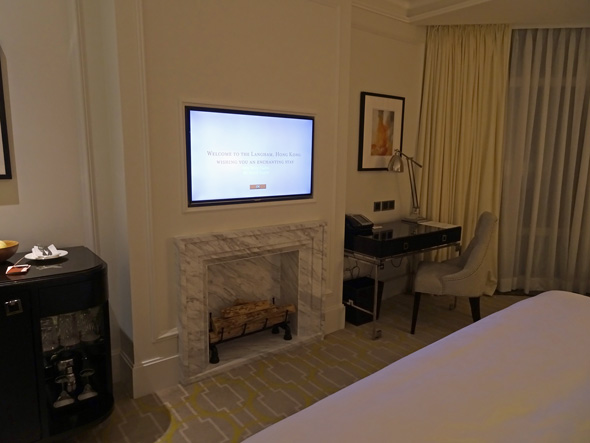 Every time we came into the room, the TV lit-up with a welcome to "Mr. & Mrs. Taylor", hoping we are having an enjoyable stay. This hotel room had everything. The mini-bar was fully-stocked: champagne flutes, high balls, old fashioned and martini glasses - even a martini shaker - with linen cocktail napkins. We had a bowl of fresh fruit, espresso maker, high speed wifi (included), laptop safe, and a (odd in a tropical clime) fake fireplace with real firewood. (I'm terrified someone someday will try to light the logs?) The bath was marble, with separate shower and bath tub. This hotel also had the old-school push-button DO NOT DISTURB/MAKE UP ROOM buttons and the nightly turn-down service included re-stocking towels, tidying the room, filling the ice bucket and placing linen floor mats and slippers on either side of the bed. 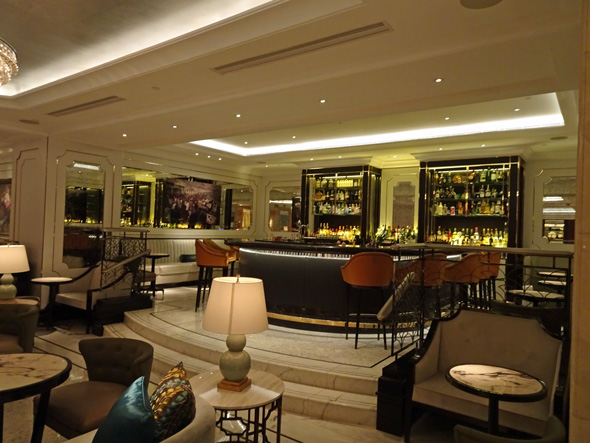 The Langham Hong Kong has a tradition of ringing a gong in the lobby each evening at 7:05p to commemorate the founding of the Langham Hotel in London in 1865. Kir Royales are passed around to anyone hanging out in the lobby at this time. In the lobby Artisan Bar, people dressed for cocktails each evening and I happily joined them, with pearls around my neck.

It is possible to reach nearly all of the shopping Kowloon offers without ever having to venture out of doors via all the linked tunnels under the city. Tons of restaurants and only a short walk to the Star Ferry terminal. Stay here.

Dave and I (both) slept through the night on Monday, so assumed we were over jet lag... only to toss and turn Tuesday night. Goodness. I can't believe we used to do this three or four times a year. With a baby. Youth is a very good thing!

My trip recap is coming soon, as well as my report on how I packed for a month in a 20-inch carry-on.

Until my next update, I remain, your hotel reviewing correspondent.