Winslow, Arizona: We usually never know what is going to happen most days while we travel. Except for the coffee + email + exercise part of our day, the rest of the hours are fair game. Today our only goal was to continue east towards Albuquerque. No time schedule. No reservations.

When it was time to leave our campsite in Prescott, we had to back-out of the pull-through site due to a poorly-placed tree. Again, not for Big Rigs.

The mercury dropped to 38 degrees overnight. 38! Shocking to our systems. The winds were so strong this morning, I opted-out of my run. My Driver went out for a bit and was frozen to his bones the rest of the day.

DT pointed the bus north on 89 until it found I-40, where we took a right and continued east. The wind was most horrid, with a few gusts and dust-devils blowing us out of our lane too-many times. So stressful for My Driver! Several of the gusts were so strong, they woke me from my dozings.

We exited at milepost 219, just east Flagstaff to see the new Twin Arrow Casino Resort. Several acquaintances at the Motorcoach Country Club had talked about this new casino as a good place to over-night. The resort allows RVs to dry camp (free) in a special parking area next to the casino, and they offer gaming and five restaurants to keep your time and pocketbook occupied during your free stay.

The casino is named in homage to the famed Twin Arrow Trading Post & Filling Station nearby on Historic Route 66. The two 25-feet tall arrows can still be seen along the road if you exit I-40 from the west. 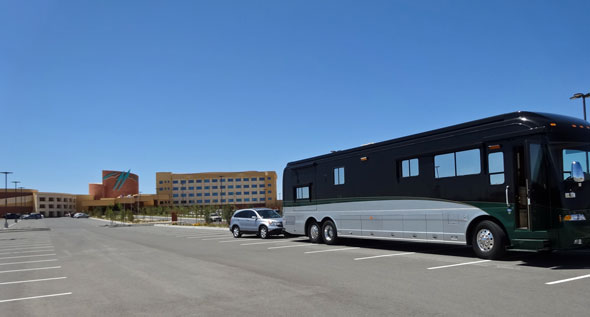 Free parking (note: this is not the overnight parking area) 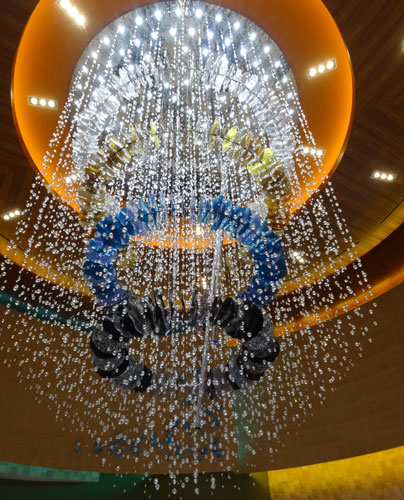 A little Vegas in Flagstaff... 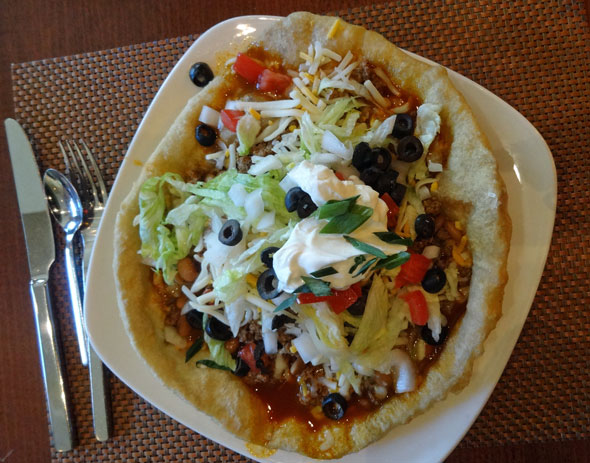 Though the casino has five restaurants, at this time the two fancier establishments are only open on weekend evenings. In the cafe and sports bar they offer Navajo Tacos - a great treat in the southwest. All the usual taco, burrito or tostada ingredients piled on Indian fry bread - like a big puffy elephant ear without sugar and cinnamon. Best eaten with a fork and knife. The beef on the menu is raised on the Navajo Nation!

Along our route today we drove past interesting Meteor Crater, did not exit at the ancient and fascinating Walnut Canyon and avoided the amazing Grand Canyon completely. Are we nuts? Quite possibly, but it was 50 degrees, super windy and we have visited these sites several times before (plus, the Grand Canyon deserves a several-day visit) and wanted to see something new. (Do a search at the right top of this page if you are interested in reading about our previous visits to any of these sites.)

Today our "something new" was Homolovi State Park, north of Winslow, Arizona. Homolovi means "place of the little hills" and was settled by ancestral Hopi in AD 1260-1400. The natives built villages with masonry and adobe walls, organized villages around a central plaza and created special rooms for ceremonies. The settlement was built along the Little Colorado River and, in the 1300's, hundreds lived in the area. They grew crops! 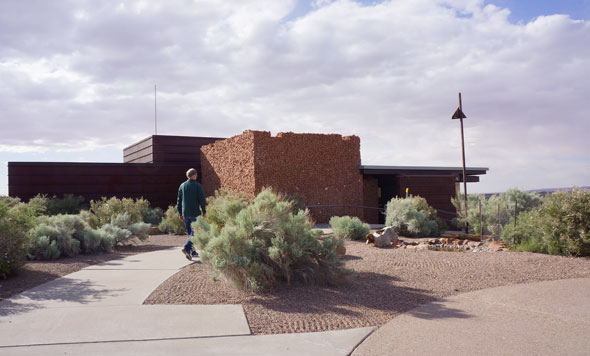 Archeologists have discovered ruins in four distinct areas. At this time, two areas are accessible to the public and the other two are being preserved and studied. 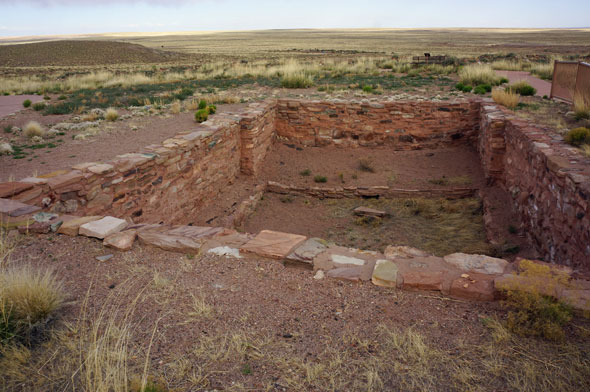 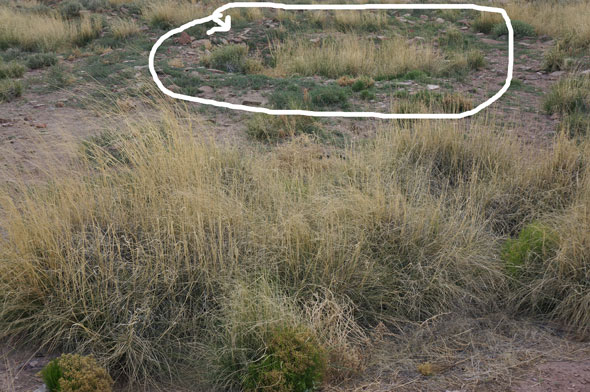 The area circled is another dwelling, yet to be excavated. 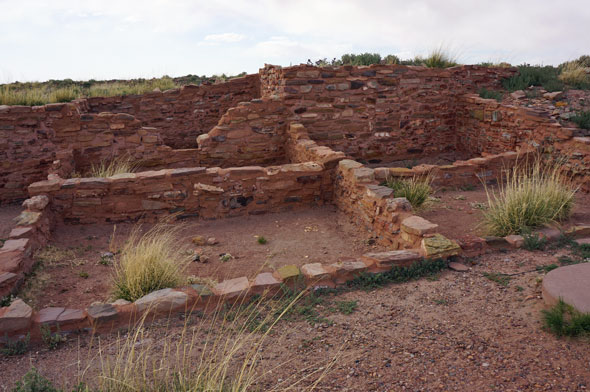 Homolovi State Park also has a campground, so we found ourselves a pull-through site. It only has water and electric service, but we were quite delighted to find they had 50 amp power... can anyone say RADIANT FLOOR HEATERS? We are at 4,900 feet and the mercury will drop to near-freezing temperatures overnight.

And though I wrote we wanted to see something new, that didn't stop DT from standing on the corner in Winslow, Arizona... and posing for a photo... during our third visit to Winslow. 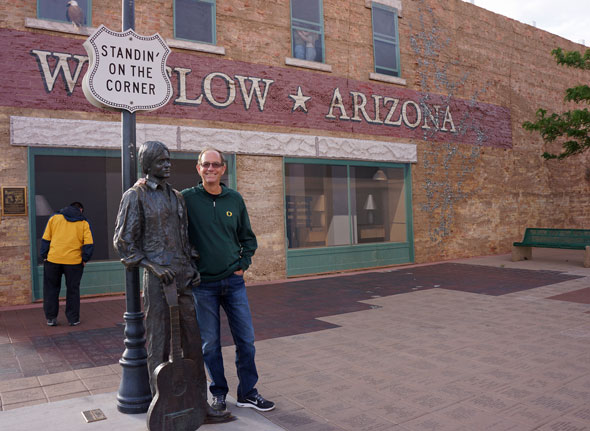 Our plan was to dine in the lovely Turquoise Room at the historic La Posada Hotel in Winslow, but after our Navajo Tacos, we just couldn't eat another thing. 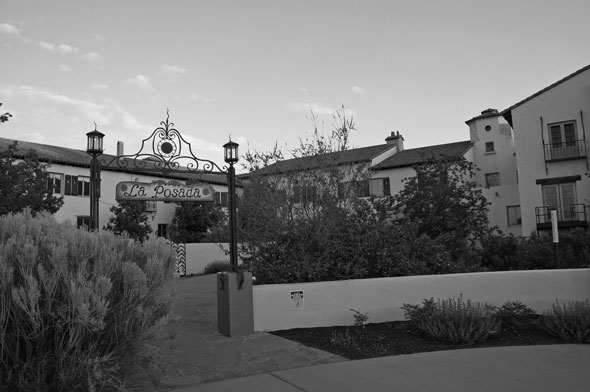 We settled for a drink in the Turquoise Room Lounge and returned to our bus. 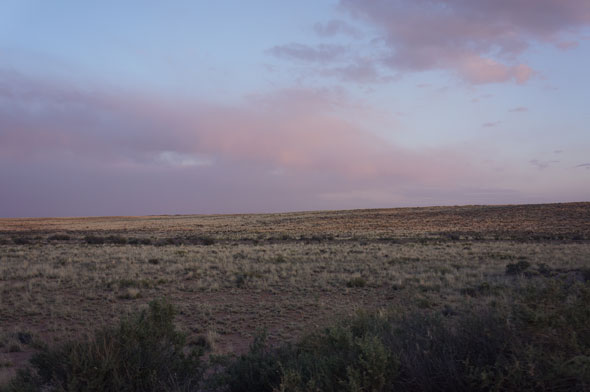 Until my next update, I remain, your wind-blown correspondent.

Added later: The next morning, DT and I went back to the ruins and took more photos. There are shards from broken pottery everywhere in this ruin site. Visitors place discovered shards on top of rocks. Dave and I found several ourselves - one had a lip, so we know it was from the top of a vessel. So exciting and so amazing to touch/discover something made hundreds and hundreds of years ago. 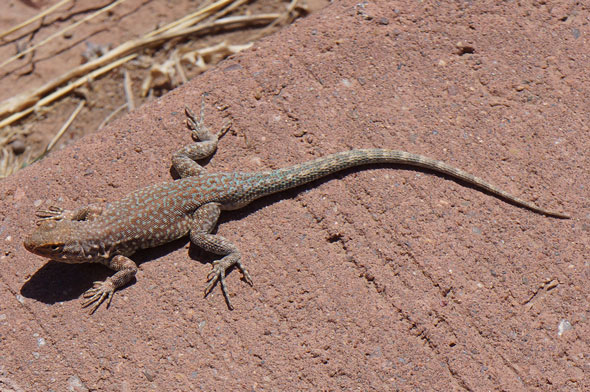 Plus... we saw a very cool lizard. 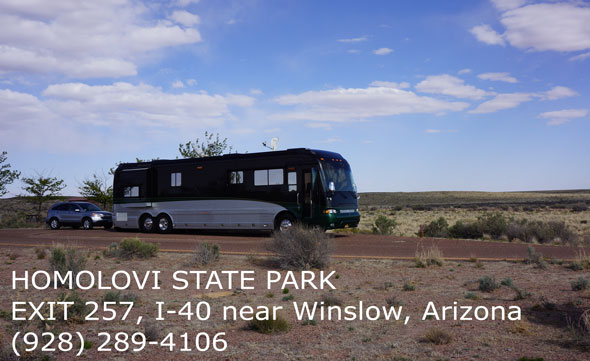