Los Angeles, California: You didn't think we could go much more than a month without seeing the Cutest Baby Ever, did you? Truth be told, we have been video chatting/facetiming nearly daily, but it just isn't the same. The kids did not have to ask us twice to fly down for Father's Day weekend.

In my spare time, between unloading the bus and getting reorganized with our house again, I finally ordered a new laptop - virtually moments before my five year old much-abused chunk of clunk bit the dust. I now am the proud owner of this light-weight beauty: 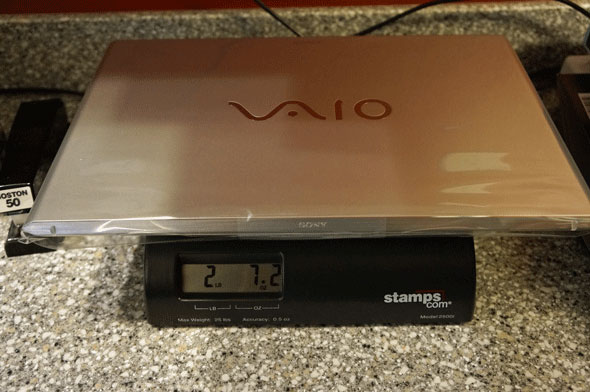 I am basically a poster child for all-things Sony. Seriously, I don't even understand why they CHARGE me for their products.

So this is the first column written on my new laptop. I have a bit of readjusting in my future, but I hope everything will look familiar to you all. If not, please forgive and give me a few days to adjust, learn and adapt.

We flew down to Los Angeles, arriving just after 2p. Lenny fetched us from the airport and by the time we arrived to the house, the CBE was awake from his afternoon nap and standing in front of the living room window waiting for our arrival.

Goodness, what a joy to see this face: 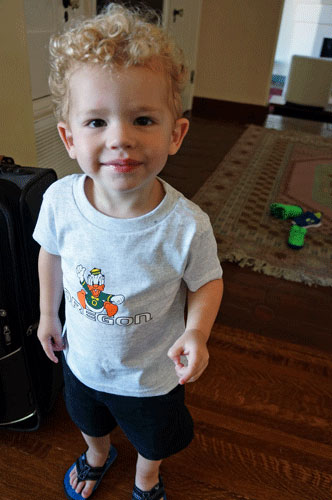 22 months old already! We brought the tee shirt he is wearing in the above photo - purchased last week in Eugene at the Duck Shop. Every time Leo looks down at the Fighting Duck, he exclaims GO DUCKS (or GAH DUHS if you are really technical). This shout-out is most usually accompanied by hands raised in the air in the "touchdown" signal. 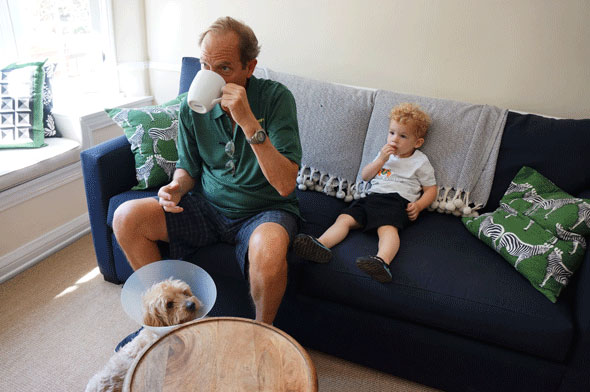 While Lisa and I organized a picnic, Bubba and Leo caught-up on the US Open golf. I can't tell you how excited Leo gets about watching sports on TV. Freaky... or maybe it's just genetic? (PS: Our Grand Dawg, Reese, Mr. Cone Head, is recovering from a little foot surgery, but is doing just fine.)

Tonight our picnic appetizers were for Friday Nights at Barnsdall, a lovely park near Hollywood. The park is situated on Olive Hill, at a home - Hollyhock House - designed by Frank Lloyd Wright for wealthy oil heiress Aline Barnsdall. Ms. Barnsdall donated her home and the lovely property - with 360-degree vistas over Los Angeles - as a park. 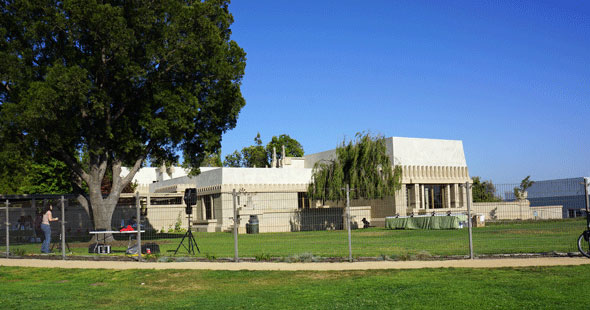 Barnsdall, when we arrived 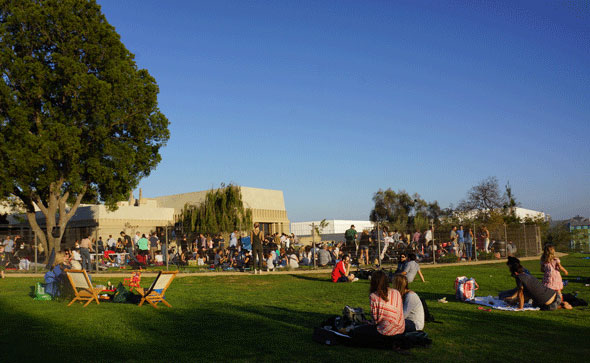 Frank Lloyd Wright designed decorative pillars around the roofline to resemble hollyhocks - the favorite flower of Aline Barnsdall. Now hipsters bring their kids here on Friday nights and drink wine and buy food from a rotation of gourmet food trucks.

It's all for charity (i.e. upkeep of the manor). 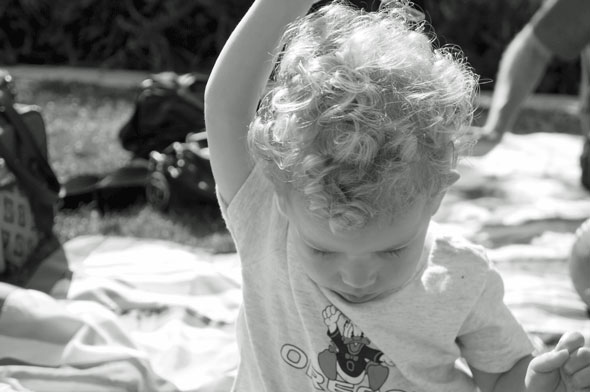 There is a slight possibility that I will be posting a lot of photos of Leo over the next few days. Sorry. Dang, that boy has a head of curls. At this age, he so resembles his mother when she was around two years old. Lisa was a bit slighter (if that is possible) and her curls were dark brown... but sometimes... I get a little glimmer of Lisa as a baby. 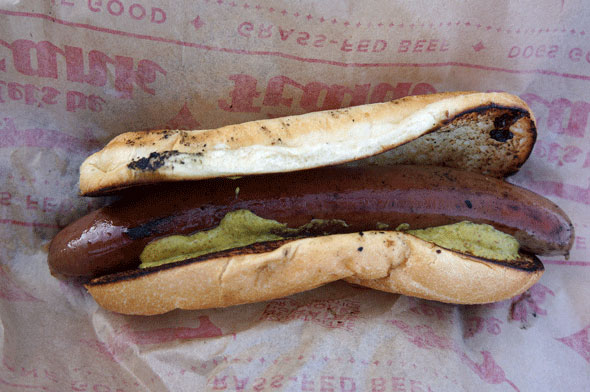 Since there is no way to know which food trucks will appear which week at Barnsdall, Lisa brought appetizers of crackers, cheese, fruit and hummus. We all decided to dine this evening at Let's Be Frank, where hot dogs are totally gourmet - made from grass-fed beef with no hormones, chemicals or preservatives. A hot dog is $6! Totally delicious - dressed only with mustard - and a great dinner.

After dinner (Leo had poached chicken breast from home), Lenny bought an iced chocolate dessert from one of the food trucks. Not gelato, not ice cream... I can't tell you for sure what this thing was. Frozen icy chocolate milk with chocolate chips? Lisa fed Leo a bite and he made the most hilarious face. We think he was shocked at the temperature, not the flavor. 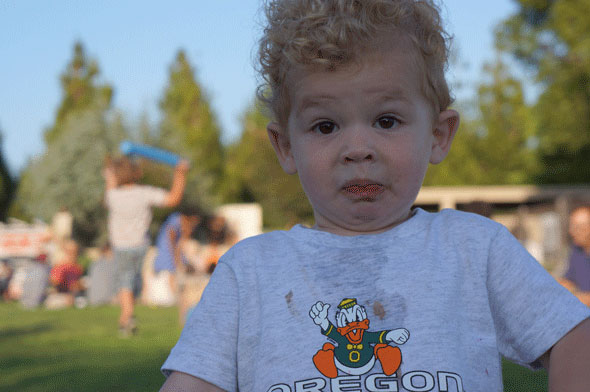 Thank goodness I had my camera pointed to his face for this memorable shot! 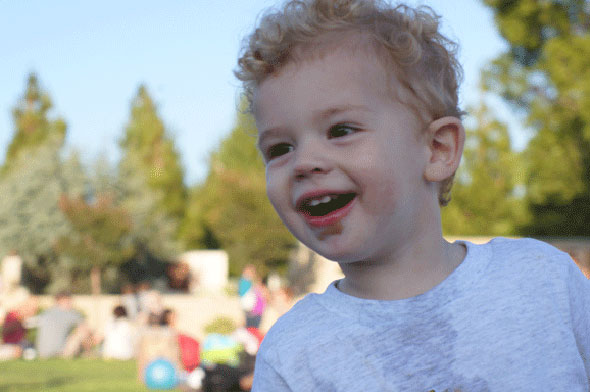 Nothing like a happy baby with chocolate all over his face. 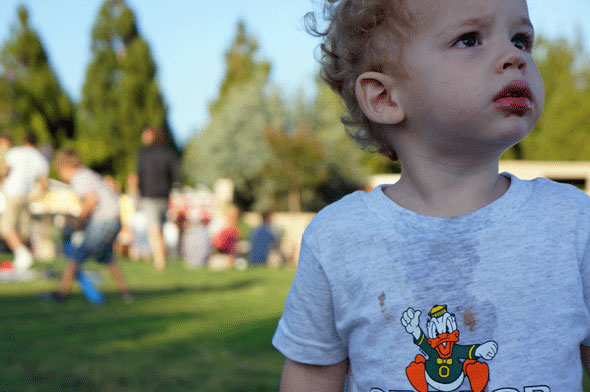 His new tee shirt may need a bit of laundering. GAH DUHS! 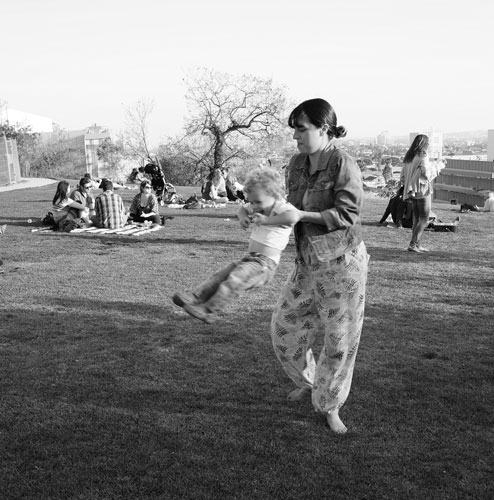 His Momma twirled him around a bit. 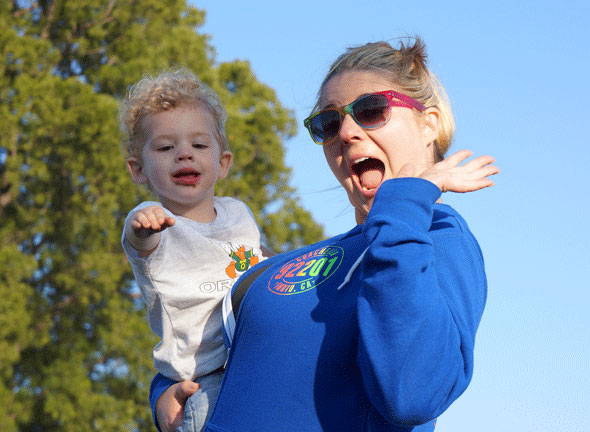 His Godmother (Angela) chased-after him all night a bit. 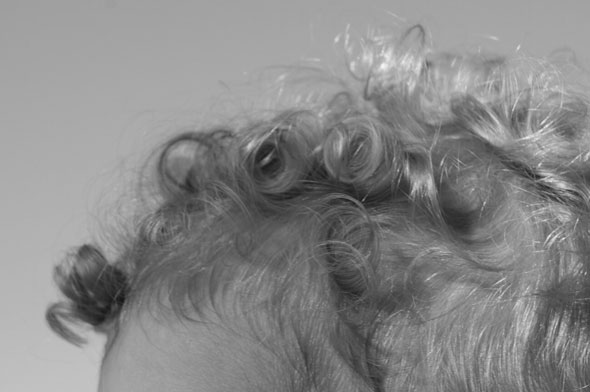 And finally, we took the little guy home, gave him a bath and put him to bed.

Until my next update, I remain, your Los Angeles correspondent.
« Gwyneth Paltrow’s Salmon Burgers Descanso Gardens »