West Yellowstone, Montana: We needed the radiant floor heaters this morning - the temperatures dropped into the high 30's overnight. Take the Weather with You. DT went for a long run, but I took the day off. I don't know if it is all the jogging I have been doing at these high altitudes, or possibly just the high altitudes... but I am feeling a little punky and decided to have a rest day. I'm basically lazy.

This morning we re-visited the Grizzly & Wolf Discovery Center in West Yellowstone, Montana - just a few feet from our campsite. We brought The Lovely Lisa here when she was a little girl and though we can't exactly remember many details, feel the facility has greatly improved.

Part zoo, part teaching facility, the Grizzly & Wolf Discovery Center provides an intimate look into the lives of the grizzly bear and wolf. Nearly every bear in the center is an orphaned cub. Most of the wolves were born in captivity. 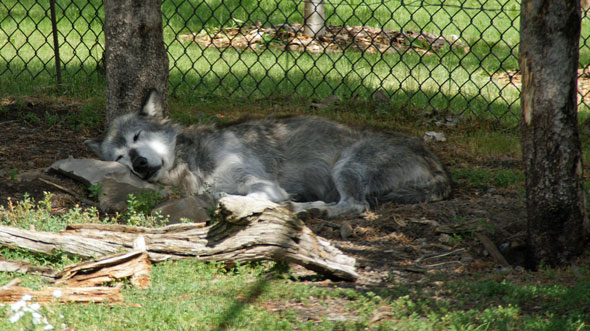 The last native Yellowstone wolf was shot in the park in 1927. In 1995, 31 wolfs from Canada were reintroduced to Yellowstone and their numbers now are approximately 150. Ninety percent of the diet of a Yellowstone wolf is elk. They also eat rabbits and other small rodents. 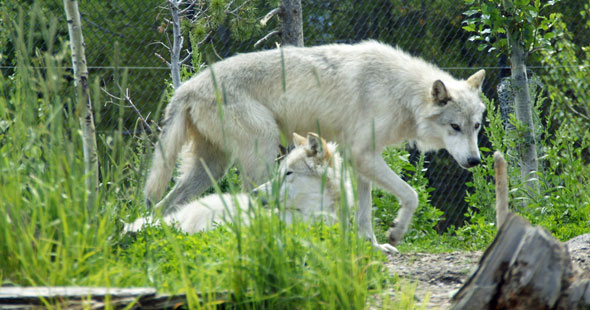 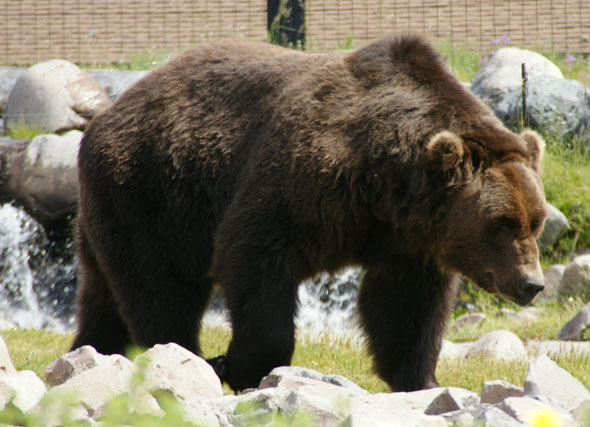 There are seven grizzly bear in the facility. Trainers hide food for the bears to find and provide live trout in the ponds for the animals to hunt. It is very interesting to watch the bears as they work for their supper.

We attended a lecture at the center about how scientists and naturalists are "re-training" nuisance bears. A bear becomes a nuisance when s/he keeps returning to naughty humans living in bear territory who do not take care of their garbage, dog food and bird feeders, etc. A bear learns if he comes into these homes or neighborhoods, he will be rewarded with food. Usually these bears are trapped and relocated. Often-times - even if they are moved over 50 miles away - they will return to an easy food source. Nuisance bears get three strikes and then they are euthanized. Now animal management teams are using Karelian Bear Dogs to scare nuisance bears away from their usual raiding-grounds. The marauding bear is trapped, tagged with a radio transmitter and re-released. The tagged bear is constantly tracked via radio frequency and when he returns to the neighborhood, the dogs (with their handlers) are waiting to chase him away. This scare-tactic is really working and less and less bear are having to be killed. Karelian Bear Dogs are from the Finnish-Russian border and were raised to hunt bear. This is fascinating stuff. 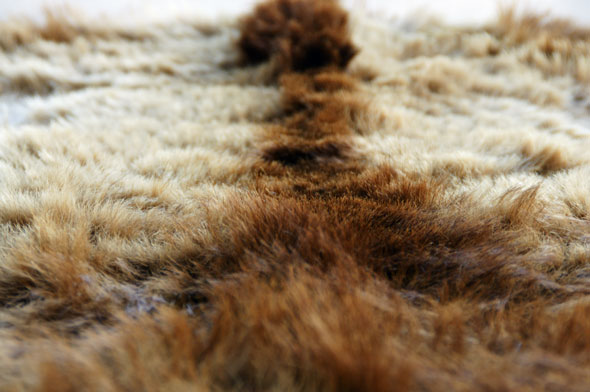 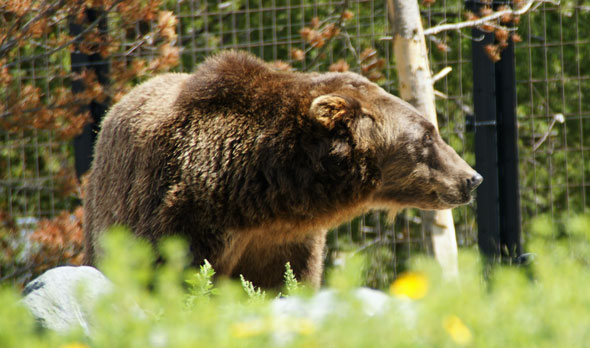 Beautiful animals. In all our travels throughout the west, DT and I have only seen one Grizzly in the wild - in Banff, Canada, on a hike. That was enough. 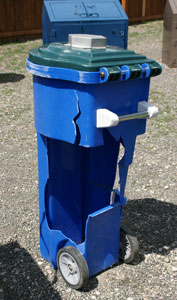 It is sad these creatures have to be in a zoo, but bears and humans do not mix. Be careful out there, people, and make sure your property is bear-safe.

I made a little video for your viewing pleasure:

In the afternoon, we left sunny, warm West Yellowstone, Montana and arrived 30 miles later to Old Faithful where the temperature was 49 degrees and it was pouring, dumping rain in the middle of a thunder and lightning storm! 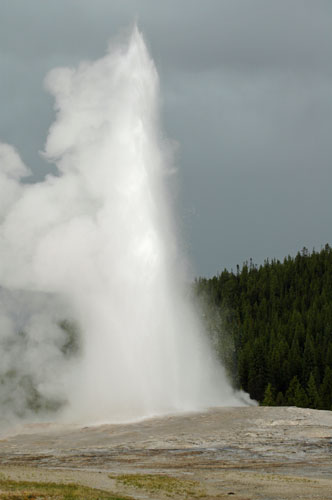 The sky cleared just a bit as the famous geyser blew. All the tourists ran out to see the fabulous explosion. DT took photos and I video-taped the eruption, and added video of White Dome Geyser as well. Enjoy.

Strange that one can go from tee-shirts to fleece jackets and rain gear in 30 miles - but that is common in Yellowstone National Park. In the park today we saw several bison, many elk, an osprey and one little coyote.

Tomorrow, we plan to drive the northern park in the Honda - cameras in tow.

Good News: one of the perps has been arrested! The other dude is still running wild with his fiance/cousin. They are suspected to be in central Wyoming, armed and dangerous. They think they are Bonnie & Clyde. If Bonnie & Clyde were cousins, of course.

Until my next update, I remain, your grizzly correspondent.

RV Park:  Grizzly RV Park. We feel this is the best big-rig park for a visit to Yellowstone. Just outside the west gate, the park has 50-amp pull-through and back-in sites. Wifi, laundry, bathhouse, playground, dog walk area, store - everything you will need, plus all the amenities of West Yellowstone, Montana - post office, shops, groceries, restaurants, tour companies, museums, etc. We are paying $48 per night.