Gone With The Wind

Indio, California:  As I left you last night, the Coachella Valley was suffering through a terrible wind storm and DT and I were on our way to an outdoor dinner party, held at the Indian Wells home of a fellow trustee. When we arrived to the party, we saw the caterer had removed all the furniture from the living area (to the garage) and ten round dining tables had been placed inside the house! Clever - and lucky they had a massive living area! The only thing remaining out of doors was the bar... which meant I had to sacrifice my coiffure for a martini. A girl does what she has to do. Every time someone opened the door to the patio to get a drink a huge whoosh of air blew into the house! 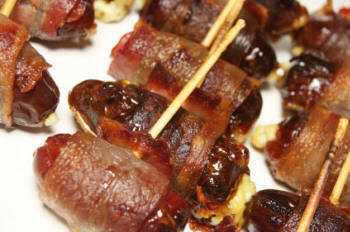 It was a lovely affair - gorgeous table decor, huge vases of flowers everywhere and passed hors d'oeuvres (bacon-wrapped dates, watermelon with balsamic drizzle or seared ahi & caviar crostini). The three courses included mixed greens with blue cheese and walnuts, a double-plated main course (grilled halibut & filet mignon), and a little slice of raspberry layer cake for dessert. Delicious and everything was so pretty on the plate. Our table mates were charming. Really a fun evening with the University of Oregon Trustees.

This morning, DT was up and out the door early again for the last day of Trustee meetings. The wind is still blowing - but no longer at gale-force. Everything in our motorhome is coated with a layer of gritty sandy dust - but I'm not cleaning-up until the wind stops. Our neighbors, Lois & Steve, were away yesterday, so we had to go over and straighten-up their site this morning. Nothing was floating in their pool, but the pads to their chaise lounges were in the bushes.

It was too blustery to run and too blustery (I said I was lazy yesterday) for me to walk over to the fitness center. I gave myself a day of rest and hunkered down until My Driver returned early afternoon. He sat down to look through three days of neglected Olympic Trial emails and I took the car to run orders to the post office.

My Old Friend, George, left his RV with friends in Mexico and flew down to Guatemala for a few weeks of hotel life. His trip has been so interesting and very eye-opening. Guatemala seems to be perfectly lovely, with good roads, and friendly folks. George returned to Mexico today and posted a photograph of a tostada he had for lunch in Mexico City. This made me craving a tostada.

We are only 75 miles from Mexico and we are within five miles of 50 places that will make a very good tostada. Too windy tonight. We went up to the clubhouse in our resort - on Prime Rib Night - for their tostada salad. 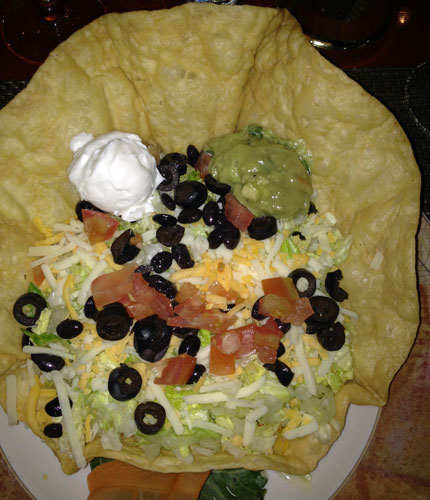 Ordered without refried beans (they contain pork at this restaurant - and before you ask, no, I did not eat the bacon-wrapped dates last night), my tostada salad had black beans, chicken, olives, lettuce, tomatoes, guacamole, sour cream, green onion and probably and a bunch of other stuff. I could not finish the salad and didn't even attempt the shell. I realized during dinner, this was the first thing I had eaten all day. 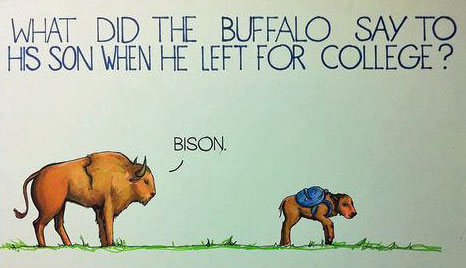