Indio, California: Even with all the golf, tennis, bocce ball, water aerobics, exercise classes, games and other endless activities, residents of the Motorcoach Country Club will find any reason to party.

Today is Fat Tuesday and Lent begins in the morning, so – Catholic or not – let’s decorate our golf carts, parade around the resort, then eat all the marvelous New Orleans traditional Fat Tuesday foods – including King Cake.

Rick and Colleen joined us again at our campsite to view the golf cart parade. This year, My Driver created rating cards (ala gymnastic or diving scores) to rate the carts as they cruised by. 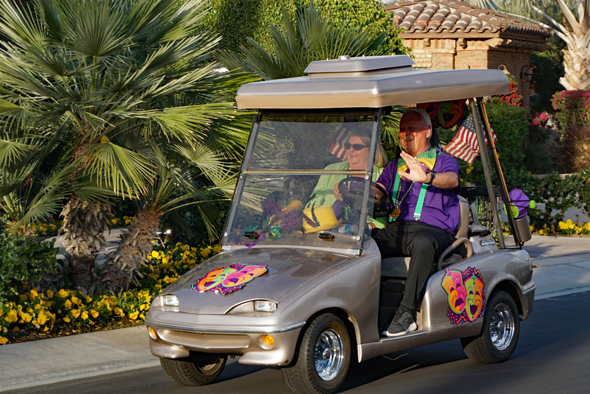 Mary and Captain Jim had to tone-it-down quite a bit this year as their antique Rolls Royce golf cart is in the shop and they are using a “loaner” cart. Still, we scored a few strands of beads and cheered-on our friends… though Dave would not give them a “10” score due to their unusual circumstances. Harsh judging, DT. 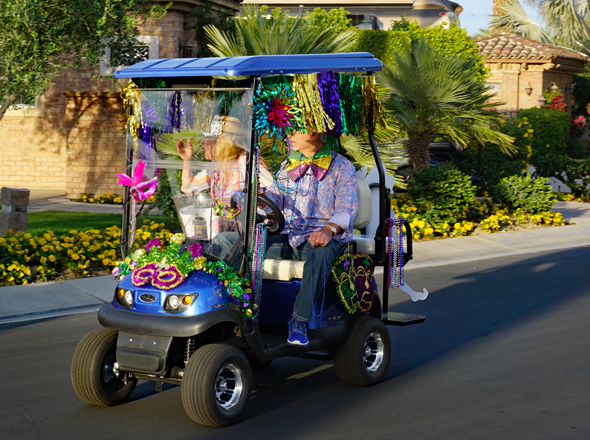 I counted just over 30 decorated carts this afternoon.

Ellie and Scott had some-sort of zydeco voodoo princess atop their cart. Dave and I watched them attempt to attach the creature this morning on our walk. The effort was well received – a very pretty “float” in the parade. 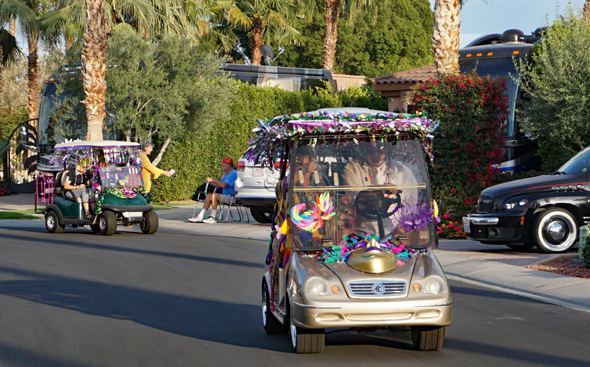 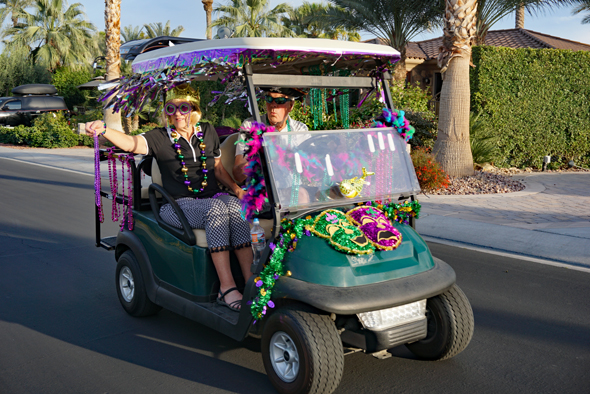 By the end of the parade, the four of us had gathered quite a few strands of beads and several pieces of candy.

No shirts were lifted in the photographing of this blog.

Colleen (holding sign) was a much kinder judge. Everyone was a “10” in Colleen’s eyes. 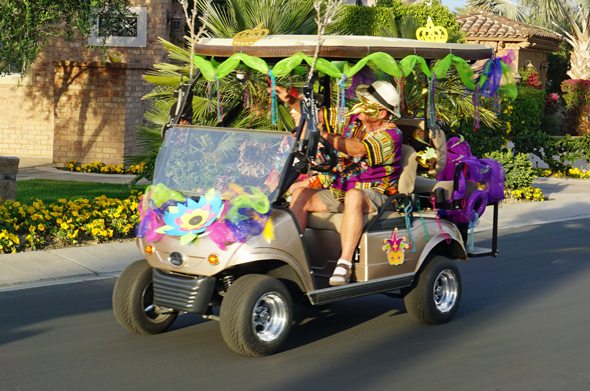 Dave and I did not go to the dinner portion at Hughes Plaza as the menu was (as it should be on Fat Tuesday) crab cakes and jambalaya… but we did stop by later for a slice of King Cake.

The party was hosted by Liberty Coach. Liberty had two beautiful buses on-site to tour, provided the catered dinner, margaritas, hurricanes, beer (and even jello shots), and a live band. Liberty Coach had King Cakes flown-in from Louisiana! Fancy.

The cake was delicious, by the way.

Thank you, Liberty Coach, for a wonderful party.

Until my next update, I remain, your laissez les bon temps rouler correspondent.