Indio, California:  With Lucy and Leo out of school over the next few weeks and work schedules calming down over the holidays... the kids drove over from Los Angeles. My Dad and his wife, Mary, drove over from their winter home in Yuma. We had ourselves a little family get-together-last-night-of-Hanukkah celebration in Indio Tuesday evening. It was a wonderful night. Candles lit. Prayers said. Latkes fried. (Also wild salmon, chicken, green beans and Oregon Salad.) Maybe we had Hanukkah cookies and maybe we also sizzled-up a few S'mores over the fire pit. Maybe the kids stayed up waaaaay later than usually allowed.

When the grandkids are here, they think riding around the resort in the golf cart is about the most funnest thing ever. Lucy or Leo get to "drive" and love sitting on Dave's lap as he lets them "steer" the cart. Of course, DT does NOT let them steer at all, or we would be in the lake... as Leo's great steering skills nearly had us last winter. Over the past few weeks, while walking/jogging my laps around the resort, I have been checking-in on Captain Jim and Mary's lot. They are away for the holidays and they asked that we supervise their tomato crop. I have been eyeing three pretty cherry tomatoes that have ripened over the last few days, so brought Lucy and Leo down to their "farm" Wednesday morning to harvest THREE ripe cherry tomatoes. Child labor laws were not broken during this photo shoot! 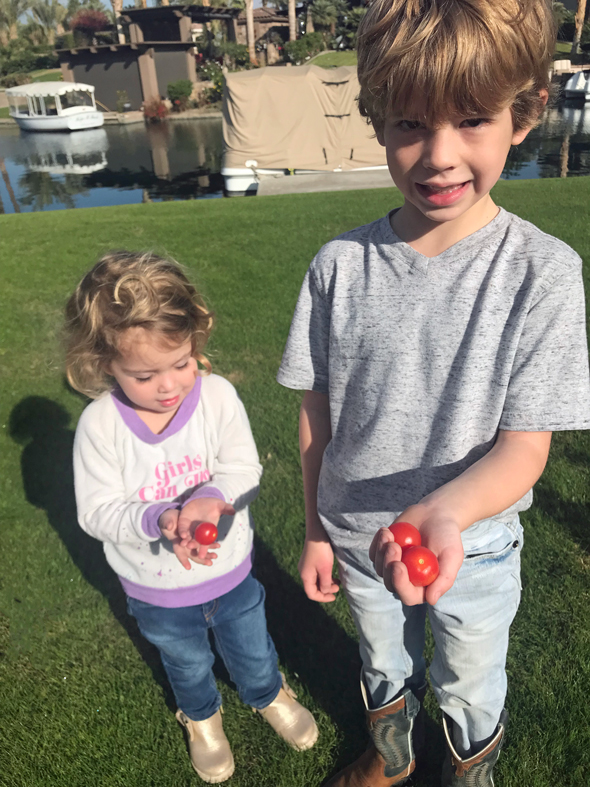 Odd thing is... after we returned to our campsite, Leo asked if I had a juicer. Not thinking Leo was contemplating juicing three CHERRY tomatoes, I idiotically told Leo we did, indeed, have a juicer. Leo wanted to make tomato juice from THREE cherry tomatoes. No amount of explaining could convince our six-year-old that the juice from THREE cherry tomatoes wouldn't amount to a teaspoon of juice... not to mention, Lucy was also now on board with the whole tomato juice idea... so, we just let them juice the three tomatoes.

Then we made a pitcher of Bloody Mary's with the juice.

Okay, we did not. The kids produced LESS than a teaspoon of juice from their experiment, (I'm being generous) but learned a lot. We need to thank Mary and Captain Jim for contributing the means for this science experience. (Probably Leo and Lucy can now attend MIT.) And we also need to tell them to get back to Indio ASAP - there are a zillion green tomatoes on your tomato plants.

Having My Dad, Mary, and our daughter's family in town wasn't quite enough family, so we invited Dave's relatives - cousin Jim and Nancy (here on holiday) - to brunch at Shield's Date Garden. The restaurant isn't a block from the Motorcoach Country Club and has a massive outdoor seating area and a massive menu - featuring breakfast all day. 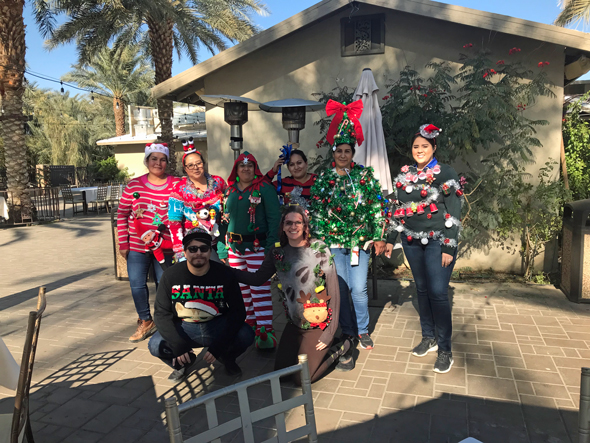 The staff were participating in their annual "Ugly Christmas Sweater" contest today, and were parading their hideousness throughout the outdoor dining area - causing quite a bit of laughter and attention from all the diners.

We had a great meal with our family. 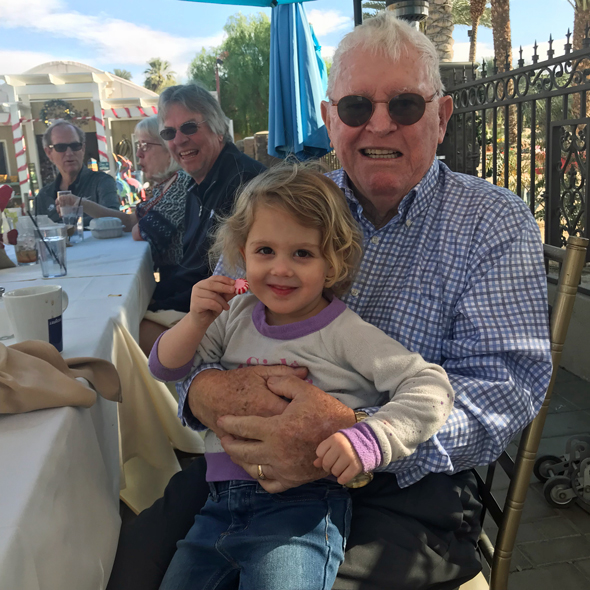 Lucy posed with My Dad - Dave's cousin, Jim, is behind Lucy's head (and Nancy is also hiding between Jim and DT). 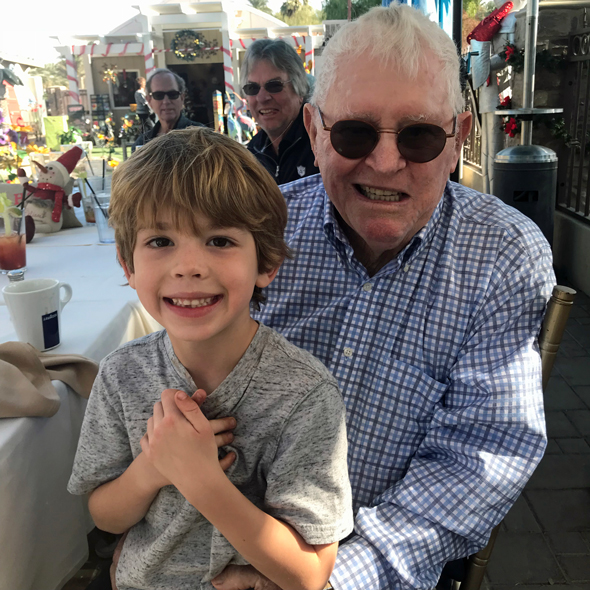 Such a wonderful thing to be with your Great-Grandchildren! 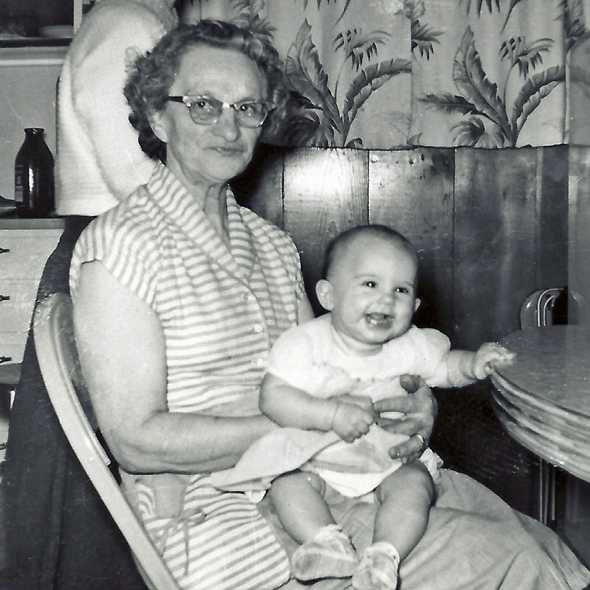 This chunky little monkey is me... with my Great-Grandmother. This wonderful woman lived forever. Lisa knew her, and she attended her grandson's (my Dad!) retirement party.

May those genes reign strong.

Until my next update, I remain, your relative correspondent.