A big few days around here. The crew showed-up yesterday to put a coat of sealer/stain (or whatever it is) to protect our deck from the Oregon rain. Wow, does it look great. Bummer that we can't use the deck for a few days - until it has dried. 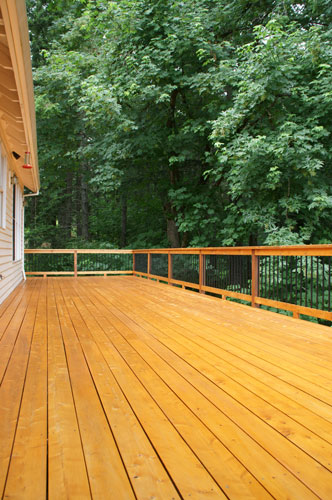 After they finished the railing, the guys did the front porch steps. Now we are more presentable. 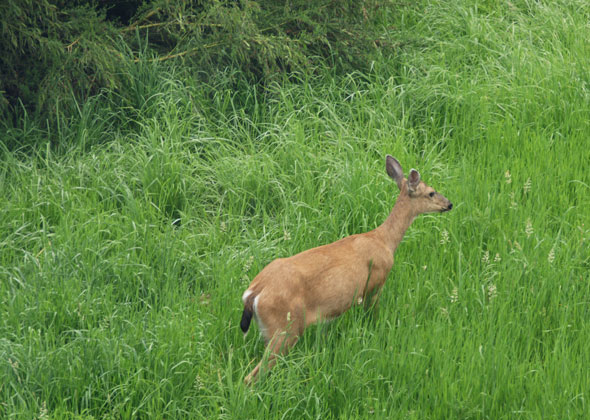 Well, sort of presentable. Looks like the field needs mowing again. Already. I need a herd of goats - this lone deer doesn't do a very good job of eating our field. 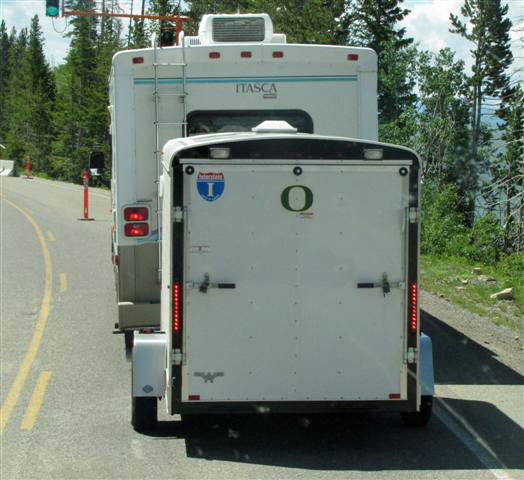 And Readers JimBob and Miss Bette said they thought they saw our rig just outside of Yellowstone yesterday... but as they approached closer, decided it "wasn't us". JimBob just cracks me up.

But the huge excitement? Matt Jr. ran the qualifying 1500 standard (3:35) required to race in the World Championships next month in Korea! We are so happy for him. Matt, Andy Wheating and Leo Manzano needed to run the qualifier and were entered in a super-loaded race in Paris yesterday.

Paris, France! We had to pay $2.99 to watch the race on the interweb... and then we watched the replay again at 5 o'clock on Universal Sports television. And, since I DVR'd the race, we watched it again. And maybe once more. (Every time we watch the race, the results are the same.)

Here is the race - ignore the two dudes in green at the front (they are the rabbits - pace-setters hired by the meet organizers to pull the racers around the oval at a pre-determined speed; they drop-out and do not finish). Matt finishes in 11th place, but he ran his fastest 1500m ever! Don't forget, every man in the race is a professional athlete - except for Matthew. Matthew just finished his junior year at Oregon. Andy is easy to find in a race, as he is always a head taller than everyone and Matt is near Andy during most of the race. A really full field, but there were a lot of runners who needed to make the qualifying mark for the Worlds!

In finishing in 3:34.69, Matthew Centrowitz now holds the University of Oregon 1500m record. You can be sure, DT phoned Matt's dad (they were college teammates) to tease him about being the "second-fastest" Centrowitz. It was a happy day. 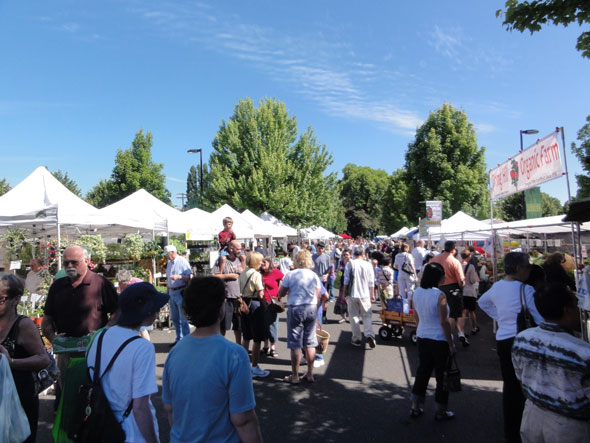 This morning, we were up early and headed out to the Beaverton Farmers Market - the largest market in Oregon. 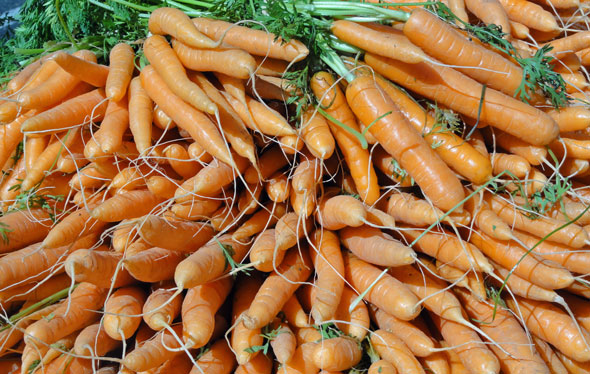 Though always ridiculously crowded, the quality and selection of freshly-picked produce is worth the hassle of trying to find a place to park and elbowing your way through the sea of shoppers. We totally lucked-out and found a parking spot less than two blocks away! 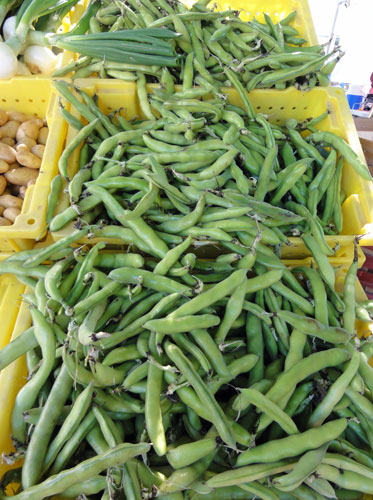 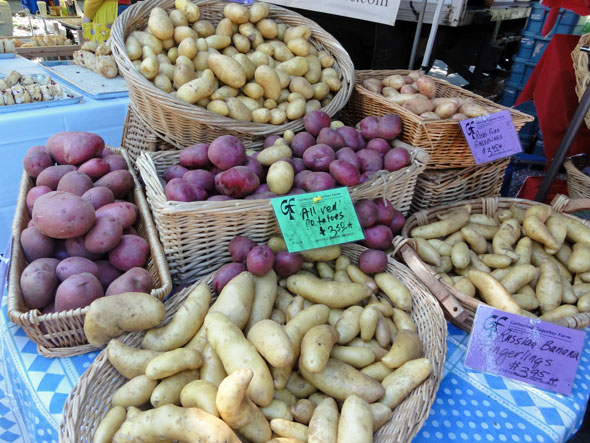 Rarely-seen-by-me Rose Finn Apple fingerling potatoes. I see a lot of butter in my future. 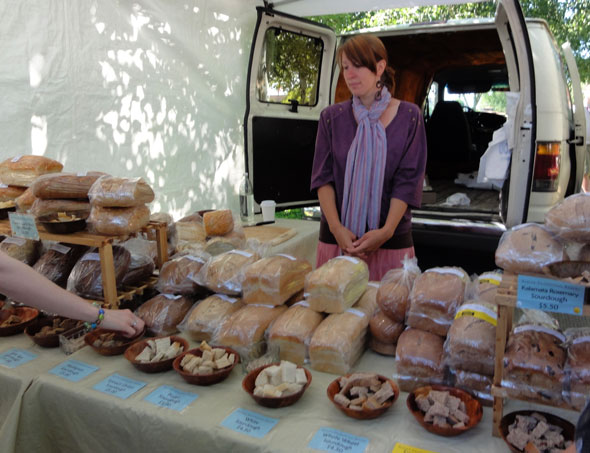 And Dave bought a loaf of whole-wheat sour dough bread. I predict a little butter in his future as well. We bought cherries, strawberries, baby bok choy, green onions and radishes. We will be eating well this week!

When we returned to our car, we found a $20 parking ticket! Excited about finding a miraculously empty parking spot so close to the market, we did not notice the "TOW AWAY ZONE" sign partially hidden behind a leafy tree branch! Oops. An expensive trip to the market this morning - but on the other hand, I guess we can be happy we were not towed because I'm pretty sure that would cost more than $20. 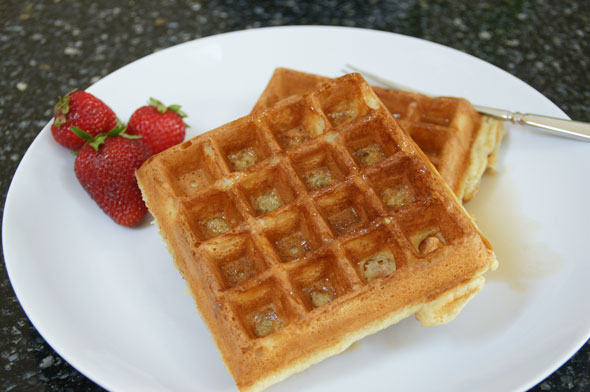 And then we came home and I made brunch - Rich Buttermilk Waffles from Mark Bittman. The waffles were really delicious, but it made five (double) waffles and we are only two people. 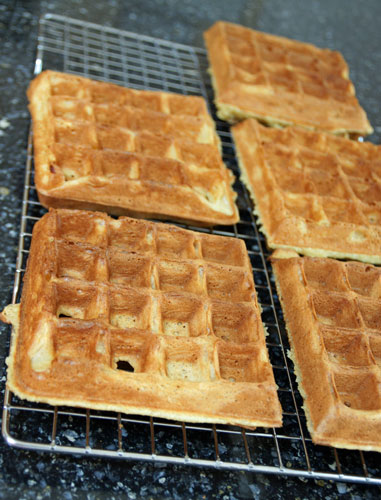 I hope that whole "frozen toaster waffle" thing is true, because these babies are going in the freezer. Has anyone ever popped a home-made waffle in the toaster? Does it work? Our toaster has a "DEFROST" and a "REHEAT" button...

Later, I ran three miles. Yes, yes... I know... I rarely run on a Saturday, but I felt like running and any time I feel like running - I run... because it isn't very often that I actually want to run. 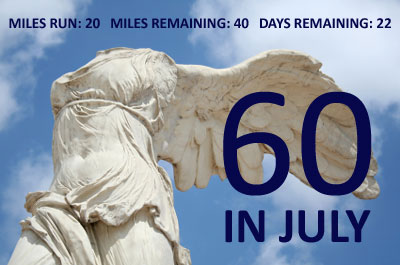 Woo Hoo! Looks like I am 2 whole miles ahead of schedule. 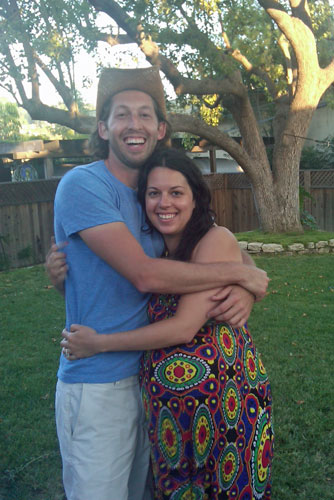 In news from Los Angeles... Lenny's Mom and Dad are visiting (LA from DC) to celebrate. Lenny & his dad have birthdays this week! Happy Birthday, boys! Lenny's dad sent this photo tonight. I think our girl is going to have a baby. 4 or 5 more weeks now.

So what do you suppose we did after purchasing all that lovely fresh organic produce at the farmers market?

We went out to dinner. 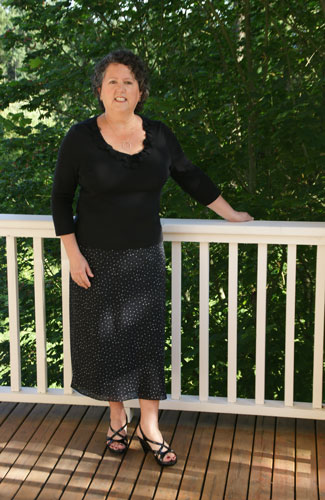 « Donise Pizza on the Grill »