On Monday, My Ducks will race for the NCAA Cross Country Championship in Terre Haute, Indiana. The Championships are always the Monday before Thanksgiving. DT ran four times in the National Championships and was twice (1973 & 1974) on the winning team.

This weekend, I have been lucky enough to receive a few photos of My Beloved from the 1970's during his running days at the University of Oregon. Oh, goodness, he was so thin. Six feet tall and 128 pounds.

I have thighs that weigh 128 pounds. 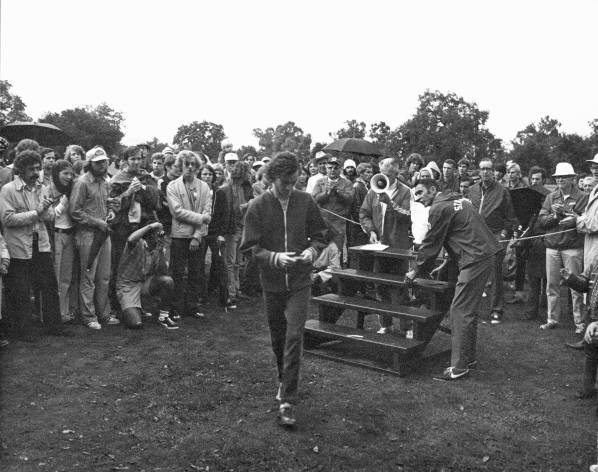 In 1973, Oregon won the Pac-8 Cross Country Championships on a course at Stanford University. In the above photo, Dave is receiving his award. He was just a few months out of high school and was on a cross country team that won the Pac-8 title. 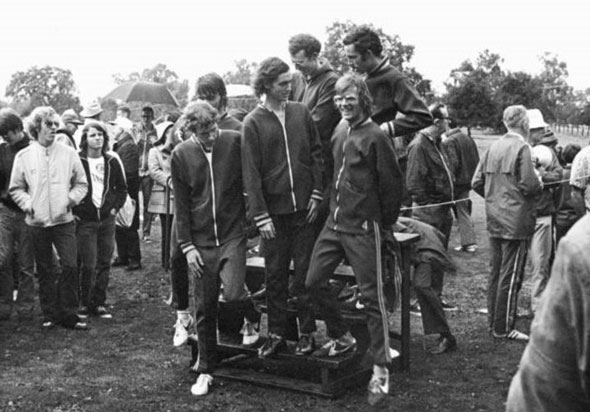 In this photo, the Pac-8 Champions are getting on/getting off the podium for a photo-op. Just a few observations:

1. I am fairly sure DT is wearing Pumas on his feet.

2. Can you even believe the size of those NIKE swooshes on Daggatt's feet? 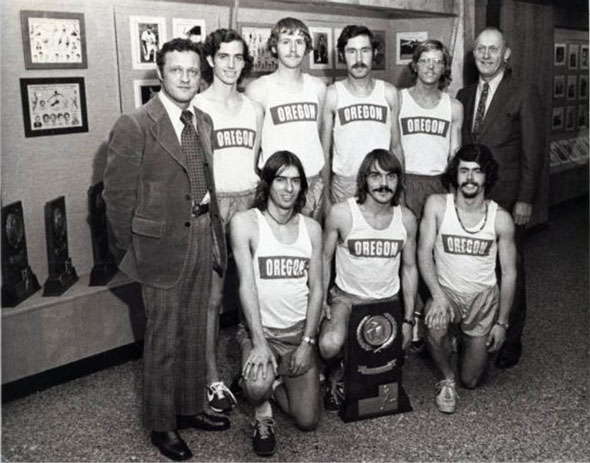 This photo is quite interesting as Bill Bowerman had just retired from coaching the Men of Oregon. This was Bill Dellinger's first year as head coach. Nice that both coaches are in the photo. The photo was taken in the concourse of Mac Court - the nearly 100-year-old basketball arena that is about to be retired. The NCAA trophies no longer reside at Mac Court, but are kept in the new Athletic Department offices at the football stadium. Open to the public, feel free to stop in anytime to see the Oregon track & field/cross country bling. 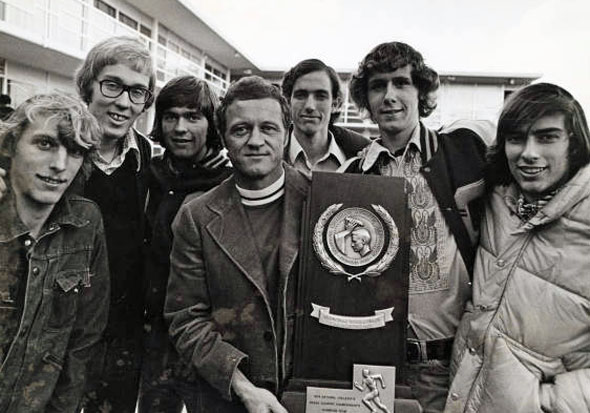 A few weeks before this photo was taken, DT was my date at my 19th birthday party. 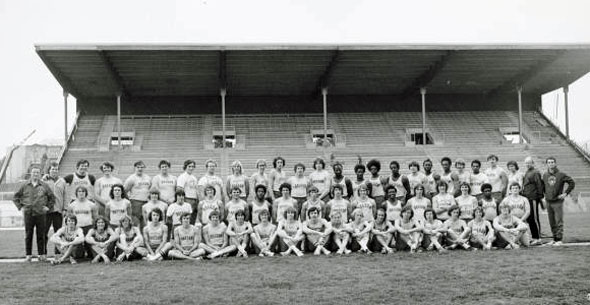 Here is the official team photo of the 1975 University of Oregon Track & Field Team taken at Historic Hayward Field. DT is on the bottom row, third from the right. I am pretty sure Dave weighed 129 pounds by now. Dorm food. "Freshman Twenty TenOne."

You may be interested to know our friend Steve (of Mary & Steve fame) is also on the bottom row, 5th from the left - and Woody (of Kathy & Woody fame) is 10th from the left. Steve ran the 800m and Woody ran the hurdles.

Thank you for indulging me this little trip down Memory Lane.

Until my next update, I remain, your GO DUCK CROSS COUNTRY correspondent.
« Wonder Why We Ever Go Home Laundry – Part 2 »