Eugene, Oregon: You all know it was cold and rainy, right? No need to report the weather.

The last day of a track meet is always the most exciting. Lots of finals. Except, of course, for this stupid meet where the top 12 or so earn the right to go race again at the national championships. Many runners, especially racers competing in more than one event won't give it their all - they will give it enough to get into the next round. Perfectly reasonable and understandable. Still, we were there, cheering on the athletes like it's our job. Wait. Maybe that is our job. 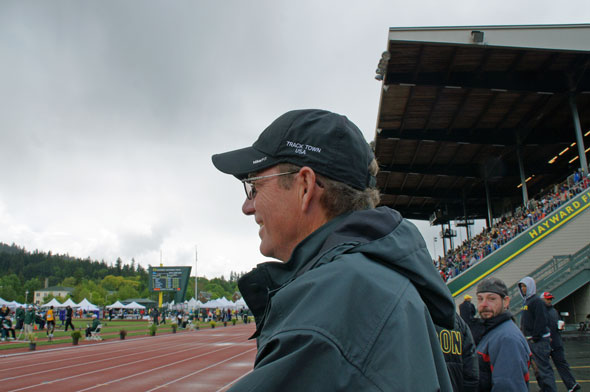 DT is very happy when he is at Historic Hayward Field.

We stood along the fence on the final turn to watch the six 4x100m relay heats. The girls are so smooth, so polished, so practiced. Look at Ti'Anca Mock of Oklahoma (pink shoes) fly!

The Oregon women also had a gorgeous hand-off. 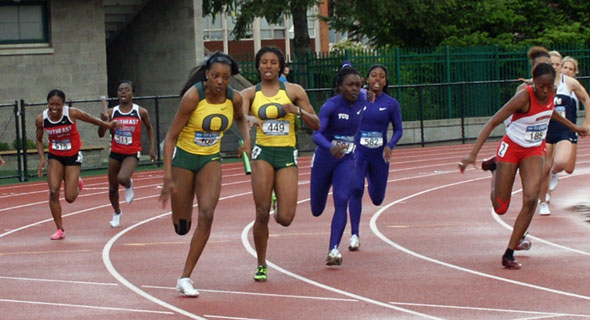 Jamesha Youngblood, Oregon's fabulous long jumper, put her arm back and Lauryn Newson put the baton in her hand. According to plan.

Goodbye. The Duck women will be racing in Des Moines.

The Duck men will not be bringing a 4x100 team to Des Moines. To be fair, the coach wasn't really planning to bring a men's 4x100 team to the nationals, but what the heck... you never know what can happen. Oregon football standout running backs, Kenjon Barner and LaMichael James ran the third and four legs of the relay. These are guys who are used to looking back and catching something. 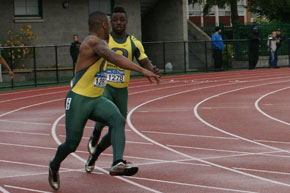 If these young men weren't such talented athletes, I would think this handoff was nearly comical. You know when a runner has to look back (or stop!) to get the baton, things are not going well. This was a crazy heat - three teams were disqualified due to not making their handoffs in the allotted space.

One thing about LaMichael James - once he has something in his hands (baton or football) the guy is a bullet. Whoosh. Out of 24 teams, Oregon finished 19th. Kenjon (1278) didn't look too happy after the race. 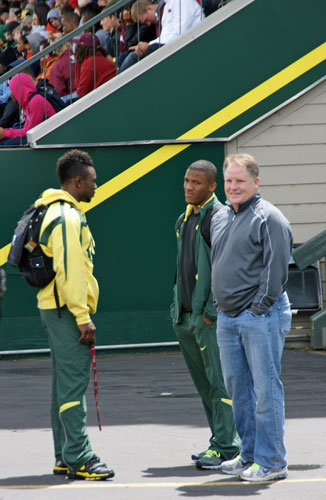 But look who was on hand to watch the relay - Oregon football coach Chip Kelly. Coach Kelly talked with LaMichael and Kenjon for a long while after their race. The University President was at the meet too. I love My Ducks! 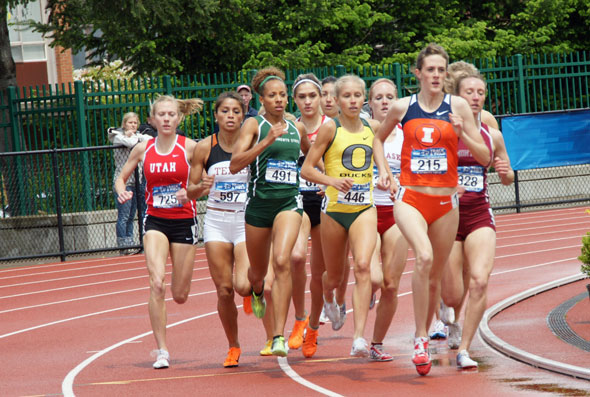 Oregon's uber-talented sophomore Jordan Hasay (446) will be representing the Ducks in the 1500m in Des Moines. 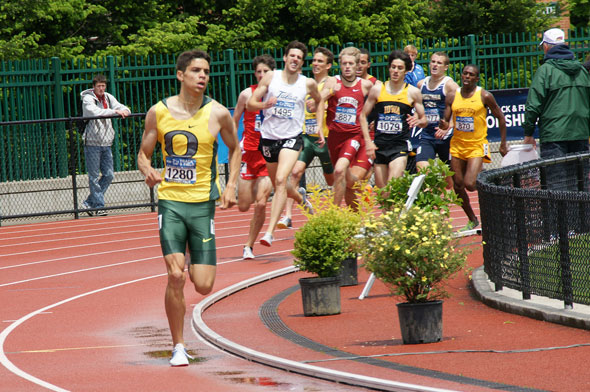 And you know our boy Matt Centrowitz will be there too. Matt easily won his 1500m heat this afternoon.

And you know our boy Matt Centrowitz will be there too. Matt easily won his 1500m heat this afternoon. 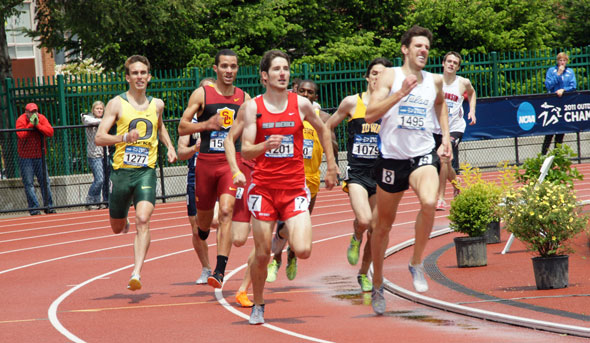 And AJ Acosta will be there too. AJ came off this final corner and turned it up a few gears and finished second! Pack your bags, AJ. I actually cried. 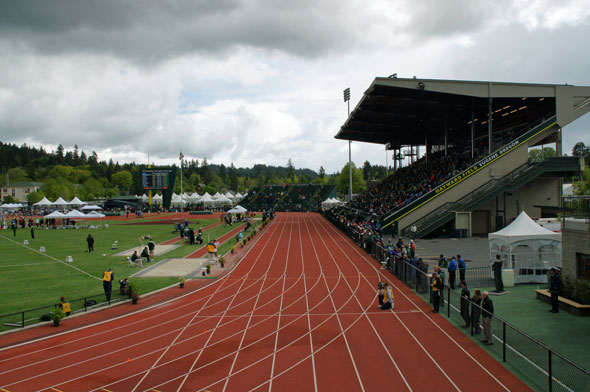 Later in the meet, we were invited into The Bowerman Building, which sits at the end of the straightaway. Not only is the building warm, it has a balcony which gives the opportunity for interesting photos. 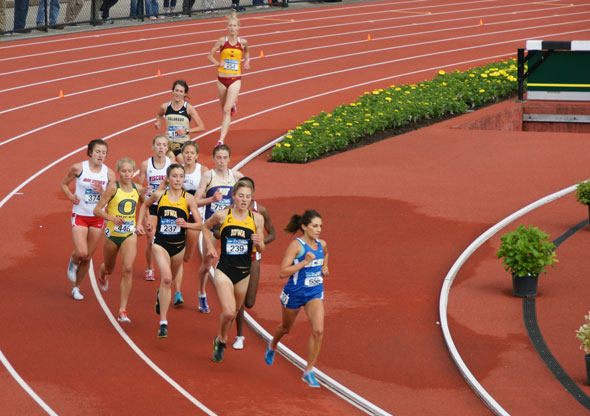 We watched Jordan Hasay qualify to run the 5000m at the nationals. Jordan will have to run a 1500m heat in Des Moines - and hopefully the final. The 5000m is a final - no heats. Practically recruited to Oregon by 20,000 fans at the Olympic Trials, the girl is a phenom. Don't forget her name.

This is a lame video, but I wanted you all to see Historic Hayward Field, hear the sounds and get a taste of what people do on a rainy Spring afternoon in Eugene, Oregon. (The race is the very first few feet of a women's 5000m heat.)

Welcome to My World. 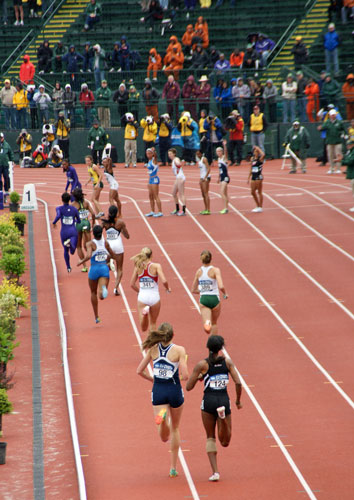 The final events of the day were the 4x400m relays. The Oregon men didn't even field a team, but the ladies are going to the nationals.

Three days of track and field! Whew! We are staying in town for the team banquet tomorrow and then heading home... until next weekend when we will return to Track Town USA for the Prefontaine Classic. The Pre Classic is a IAAF-sanctioned meet for professional athletes. The meet will be televised live on NBC, (Saturday - June 4th) 11:30a-1p pacific. Set your DVR's.

Until my next update, I remain, your tracked-out correspondent.
« Double Header While We Were Away »