Indio, California:  Since receiving several emails from Readers wondering of my demise... I thought maybe this old gal should update this old blog. There have also been inquiries as to Lisa's safety relative to the fires in the Los Angeles area. They live in town, so are far from the fires, though Leo's school had a few days of "indoor only" recess due to poor air quality conditions.

Dave and I haven't been too busy, but haven't accomplished anything worth sharing. Boring stuff. Anyone besides maybe his Mom want to know DT chipped a molar and had to find a dentist? Didn't think so. (He's fine; the tooth just needed to be smoothed-off.) Anyway, ten days without an update is a World Record for RVGoddess.com, but there are a few activities worth photographing and sharing.

The three (irrigated) pots outside our covered pavilion now hold herbs - and one cherry tomato. We had a bit of luck last year with a jalapeno, so planted two this year, along with two bell peppers. While the herbs are high enough to be out of reach of the pesky wabbits, I'm thinking rabbits don't like jalapenos, because they left the plant alone last year. The pots don't look so impressive today, but in a week or so, they will flourish and I will begin snipping away... as will our friends.

Remember my fancy new expensive micro-wave-convection-oven combo that we had installed on the way south in October?? The POS oven that doesn't have a clock display... like even the cheapest of the cheap microwaves? Sooooo... if you turn-on the oven's under-cabinet light, then open, then close, the oven door, the clock remains lit... as long as the under-mount light is on! 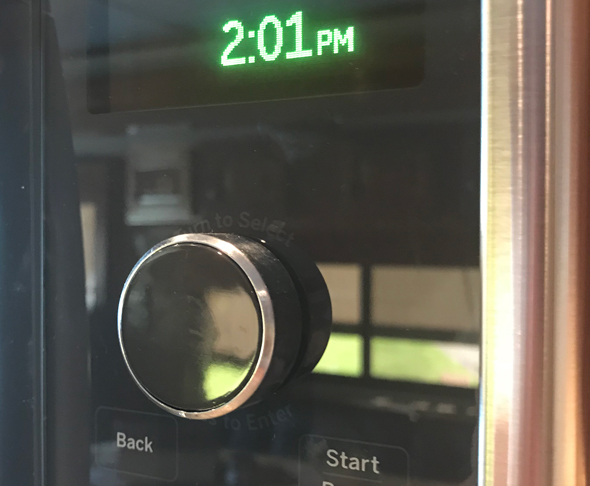 Of course, this is mostly completely useless as I have no intention of leaving the under-mount light on 24/7/365. We will refer to the ugly clock we hung on the kitchen wall.

So tonight starts the eight-night Hanukkah celebration, commemorating the miracle of a teeny bit of lamp oil burning for eight days, after a desecrated temple in Jerusalem was re-sanctified about 140 years before Jesus was born. (Did you know Jesus celebrated Hanukkah? He did!) Also tonight, our resort held their annual Christmas Golf Cart Parade... where members decorate their golf carts for the Christmas holiday, parade around the resort, then have a potluck at the Yacht Club. Dave and I felt there was no reason we couldn't combine the two dates. So I did what any Bubbe would do. Fry latkes. 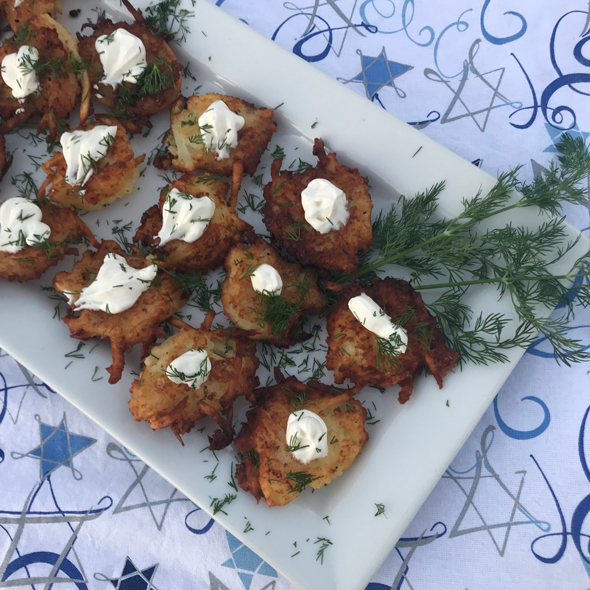 Five dozen little latkes, topped with a little sour cream and fresh dill. Then we put-up a little table on the street and handed out warm latkes to passing paraders. 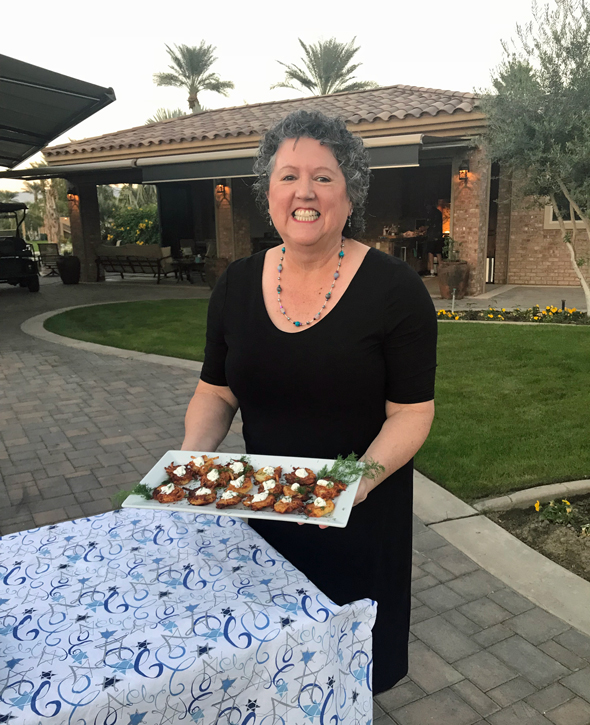 It was a blast... except there was quite a back-up/hold-up in the line and I am ashamed to say we ran out of latkes. Embarrassed much? I may not get a chance to redeem myself: the first night of Hanukkah falling on the Tuesday of the Golf Cart Parade won't occur again until 2028. If we are still wintering here, please, someone, send an email reminding me to fry a lot more latkes. 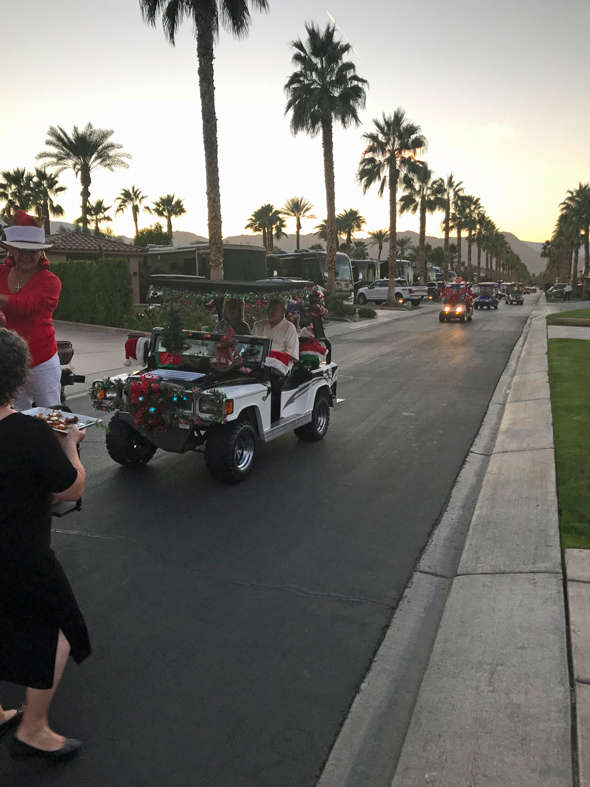 Some people had no idea what a latke was, but knew all about potato pancakes. Confusion abated as I explained tonight was the first night of Hanukkah. 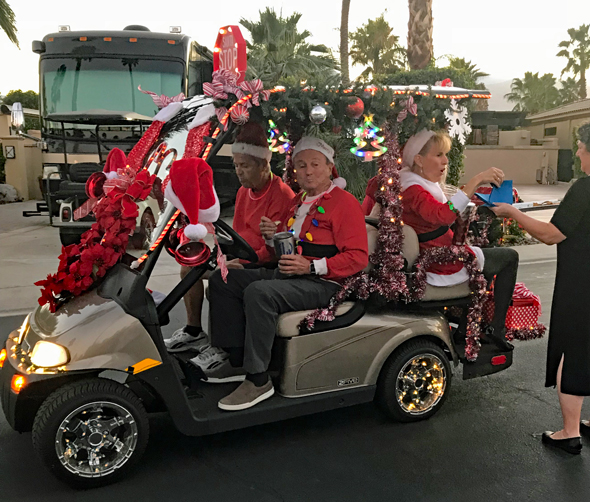 As you can see, our fellow campers really get into the Christmas spirit. Our club supports a fabulous local charity, the Coachella Valley Christmas Store. This charity creates a "department store" during the holidays. Families-in-need can come to the store and "shop" (free!) for gifts for their children, while their children are in another room being entertained with snacks and crafts. After the gifts are wrapped in the "gift wrap department", every family is sent home with a family group photo and a box of food containing a wonderful Christmas dinner. Isn't this just the best thing? Motorcoach Country Club members are very generous. The Christmas tree in our clubhouse restaurant is bulging with new bicycles, toys, books, purses, clothing, make-up, electronics - everything for every age group. Dave and I may not celebrate this holiday, but we always place several sets of Magna-Tiles under the tree.

And just how Christmas is more fun with children, Hanukkah is really for the kids... and we weren't with our kids tonight (school!), so we shared our evening with another couple - Elaine and Larry. They also celebrate Hanukkah and are also away from their kids this evening. 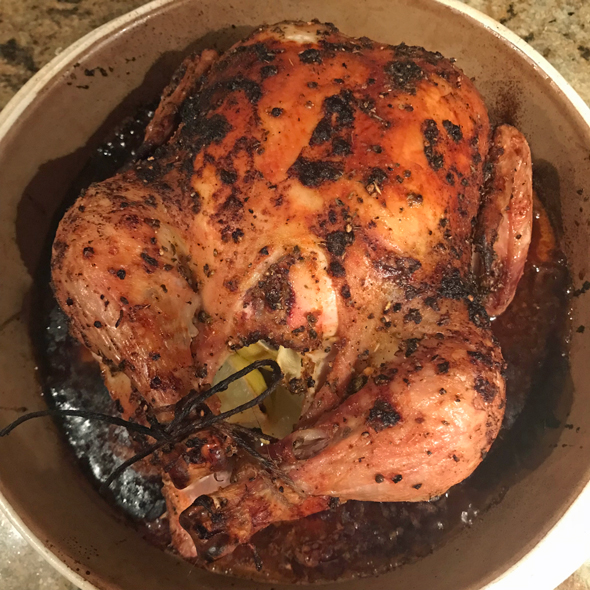 So I did what any Bubbe would do. Roast a chicken... and fried up a few more latkes. Both couples will be visited by their kids and grandkids on the last (the best! 8 pretty candles in the menorah!) night of Hanukkah... when more latkes will be fried.

But Dave and I can't wait that long. We are heading to Los Angeles Thursday to see Leo and Lucy.

Until my next update, I remain, your oily correspondent.