Napa, California: Sorry no update last night. We didn't do a thing yesterday! No wine tasting. No exotic cupcakes. I didn't even take a photo. We did get out early to jog along the river-side path in Kennedy Park - then barely made it back to the car before the skies opened and poured buckets of heavy rain until late afternoon. We spent most of the day hunkered-down in the Magna Peregrinus where we actually did this thing called "housework" and "laundry". Boo. When the skies cleared a bit, we raced out to a market for fresh provisions.

Amazingly enough, since we dine out so often - our bus is equipped with a full kitchen, including dishwasher, so there is no excuse. I boiled up some pasta, tossed it with with fresh arugula leaves, garlic and a bit of lemon zest. With a tossed salad, it was a delicious, low-fat - dare I even mention - vegan meal. Organic, of course.

The weather cleared overnight, but My Poor Brother in Denver says the rain storm that went through here yesterday will be giving him at least a foot of snow tonight. Isn't it MAY???

This morning we both jogged on the trails here in the county park - DT has found a nice loop. It does have a bit of hills, so I am not overly-fond of his course, but I rallied enough to jog two miles up and down. I rarely run hills, so will be paying for this endeavor in the morning. Dave ran 5 miles.

Then we drove the Honda over to Bodega Bay! 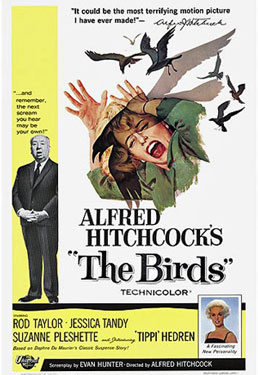 We used to come here quite often. DT's Grandma (now deceased) lived in Santa Rosa and when we visited, she always wanted to go "on a drive" and she especially loved a visit to Bodega Bay. A tiny little fishing village, Bodega Bay is famous for being the set location of Alfred Hitchcock's The Birds. Grandma would point-out the locations where several scenes from the movie where filmed, but we couldn't find them today.

There was big excitement in Bodega Bay today! Something was meshuga with a power line on Highway 1 (aka the main street running through the teeny town). The fire department had trucks on either side of a power pole and traffic was diverted on the up-hill side from the bay. Every thirty seconds or so, an awful noise (imagine a mosquito the size of Cleveland hitting a patio bug-zapper) would come from the electric line and big fire-balls would shoot-out of the power line and fall onto the highway. The noise was scary enough, but flying balls of fire are not on my list of things I want hitting my car.

We made it out to the west side of the bay and found this gorgeous vista: 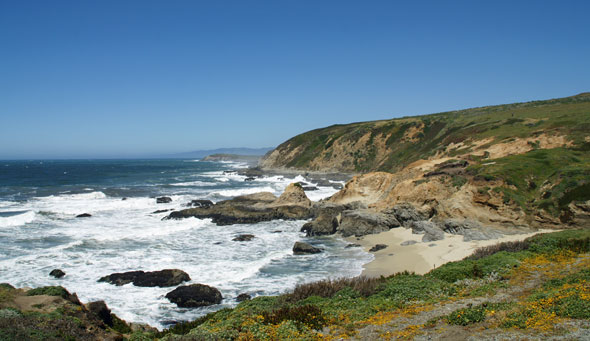 The Pacific Ocean - looking north. So gorgeous. We only saw one sea lion in the water, but the hills were covered with wildflowers and the bird life was impressive. 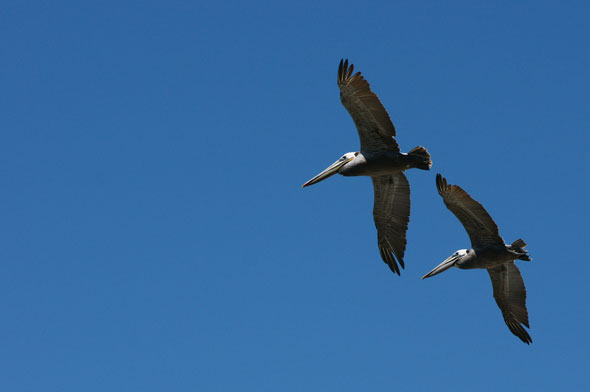 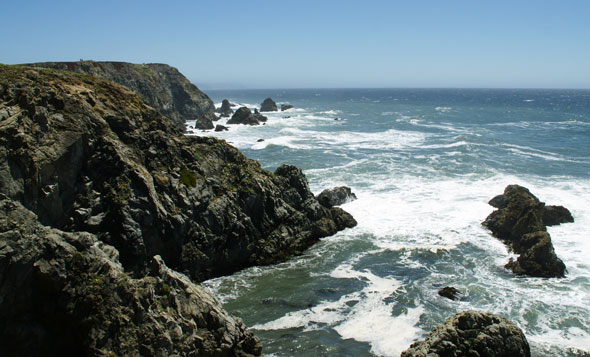 From the same point, this is the view south - towards San Francisco. 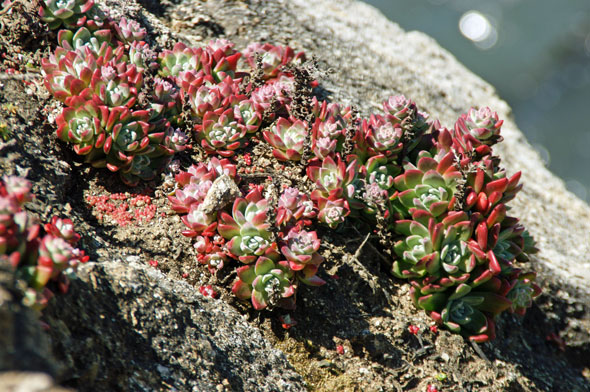 These succulents seemed to be growing right out of the rocks.

Back at the bay, we toured through Doran Beach State Park. Beautiful (probably really windy all the time though) campground. Dry-camping only and only about two sites long enough to hold our monster RV.

As I said, there were so many shorebirds on Bodega Bay. 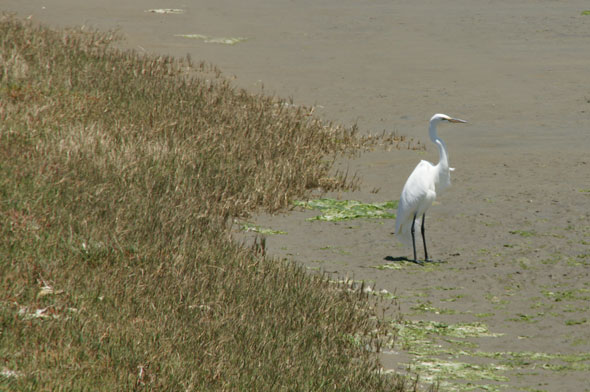 This is a Reddish Egret. I sent the photo to my Dad and he identified it for me. It is good to have an ornithologist in the family. 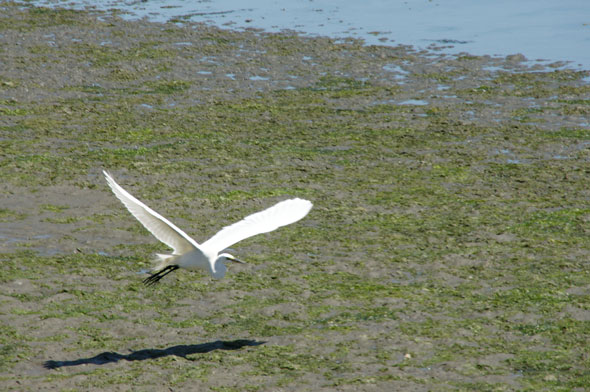 The egret put up with me (and my camera) for a few minutes, then decided to head for a more private part of the bay.

The entire town was, by now, without electricity. The exploding section of Highway 1 was being re-routed through a tiny one-way 15%-grade "street" that our Honda could barely squeeze-through. Pity the poor Doritos delivery truck, UPS truck and (G-d help him) 40' motorhome having to make this detour. After weaving through the two-block diversion, we settled on lunch at Lucas Wharf. It was not good. It was not bad. It was food. 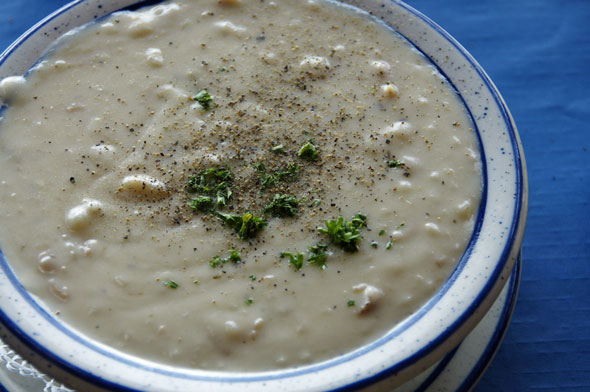 DT ordered the clam chowder as the waitress told us "none of the fish on our menu is fresh this time of year". (This really worried me about the poor guy at the next table with his bucket of steamer clams.) David said his clam chowder was not gummy, but tasted like it came from a can and maybe they forgot to put clams in the can. My fish & chips were decidedly gummy. I don't do it very often, as you know, but I cannot recommend Lucas Wharf in Bodega Bay.

Life is just too short to eat mediocre food... unless there is a civic emergency... because Lucas Wharf has a generator! 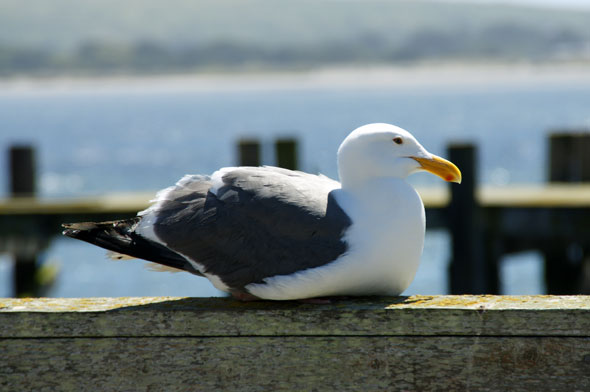 Anyway... it was just a beautiful afternoon and I am not going to let a little bad fried food come between me and Bodega Bay.

We avoided the erupting power line and headed south on Highway 1, towards San Francisco. This is just a beautiful drive - but maybe one best driven in your tow car and not your massive RV. 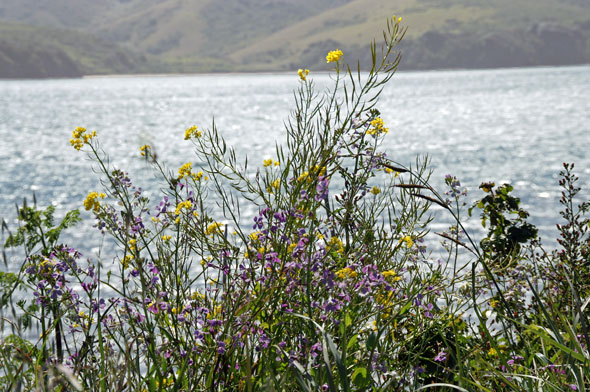 The wildflowers are magnificent in May. 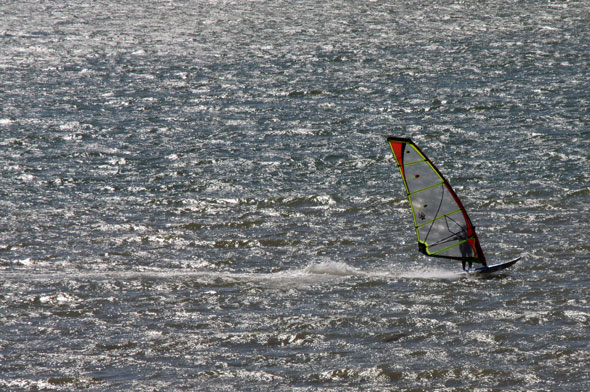 And we saw so many wind surfers! 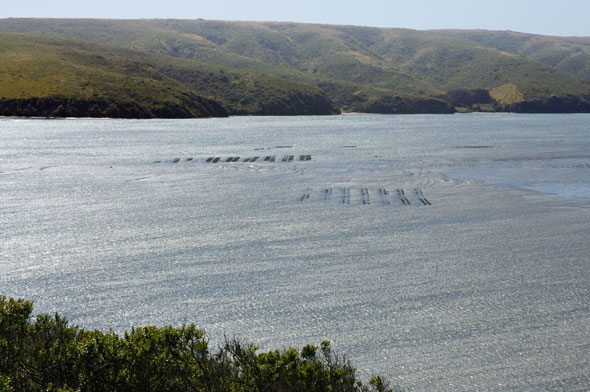 It is fascinating to see the oyster beds in the middle of this huge bay. 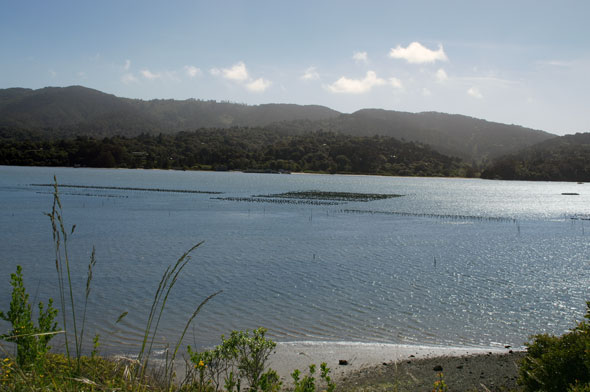 We saw oyster beds for miles along Highway 1 today.

Our route also took us through the quaint town of Point Reyes - home to Cowgirl Creamery and Point Reyes Farmstead Cheese Company. Both companies make cheese from grass fed-only animals and consistently produce some of the finest cheeses made in America. A fabulous organization, MALT (Marin Agricultural Land Trust), oversees that Marin county remains natural and works to keep family farms and ranches from becoming extinct. Farm to Table is what it is all about.

Before commuter traffic from San Francisco became too heavy, we took a left and headed back to Napa. Dinner tonight was prepared (not by me, but) by the chef at Uva Trattoria & Bar in downtown Napa. Second time we have dined here, and again, a great review. Friendly, helpful servers and an interesting menu with classic Italian favorites and tempting specials - Veal Osso Bucco anyone?

Until my next update from exciting wine country, I remain, your Napa correspondent.

RV Park: - Skyline Wilderness Park. This campground is operated by county. The 39 sites are cozy and on gravel. Some full hook-up 30/50-amp sites, but most sites are water and electric only. Bathhouse on-site, and a laundromat just a few blocks down the road. The park has miles of hiking and equestrian trails and actually has a path that leads one mile to the river where it joins the trails at Kennedy Park. Though very rural, this campground is just minutes to downtown Napa and would be a good choice if you are camping with kids. Dogs are allowed in the campground, but are not allowed on the trails. Strictly enforced!
« (Practically) Perfect Mother’s Day Adventures in Wildlife Photography »