Portland, Oregon: As we continue to downsize, organize, and purge our house of so much stuff, we are finding a lot of memories. One of our tasks is to remove photos from frames and send the photos to the scanner (if we don’t already have a copy in our cloud). Wedding photos of our parents. Photos of Lisa as a child. We went “digital” around 2000 – I think fairly earlier than most – but early digital photos were a mere 2 mega pixels. Too small to reproduce at a decent quality. But the photos we captured on film and had digitized are great for reproducing. These few last photos will finally finish my digital project.

While we were living in Taiwan, Lisa had nearly a one-month holiday from the Taipei American School (台北美国学校) over the winter break. American (or International) schools abroad aim to keep American kids on-track in the American school system (and prepare for university) while their parents are transferred overseas. They usually have one requirement for acceptance: a foreign passport… and, of course, cash money for tuition. Lisa had a US passport, and Dave’s company paid her tuition, so she was golden. (Tuition for preschool-5th grade at TAS was $7000 when Lisa attended in the mid-80s, and is currently about $24,000 – more if English is not your first language, requiring extra instruction.) With so many American and European students at the Taipei American School, a month over December and January was a great break so kids could travel to their home countries to celebrate the holidays with Bubbe, Nonna, Abuela, Mormor, Bibi or Grandma.

We traveled to Oregon/California once or twice per year to visit family, so decided to take the 1986-87 break to see sunny-in-December Australia and visit our friends in Melbourne with our five-year old daughter. We recently found my travel journal (see I was blogging before blogging was a thing!) and I gathered all the photos from our trip and will combine the two into a little photo book…. so Leo and Lucy can throw it away in 2090.

We flew from Taipei to Hong Kong, and then on to Sydney. I do not remember the flights, but think we spent a night in Hong Kong. Three days in Sydney exploring the town and the zoo, and renting a car (the first time Dave had ever driven on the “wrong” side of the road) to visit sites outside of Sydney. 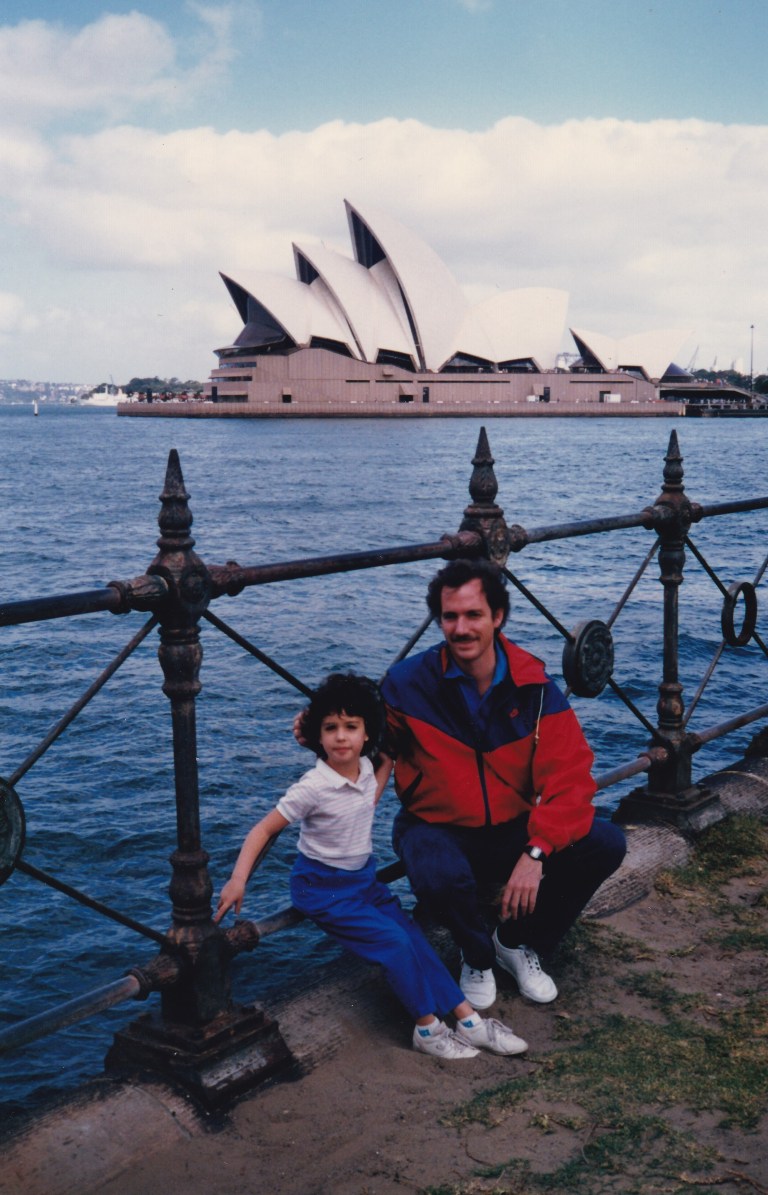 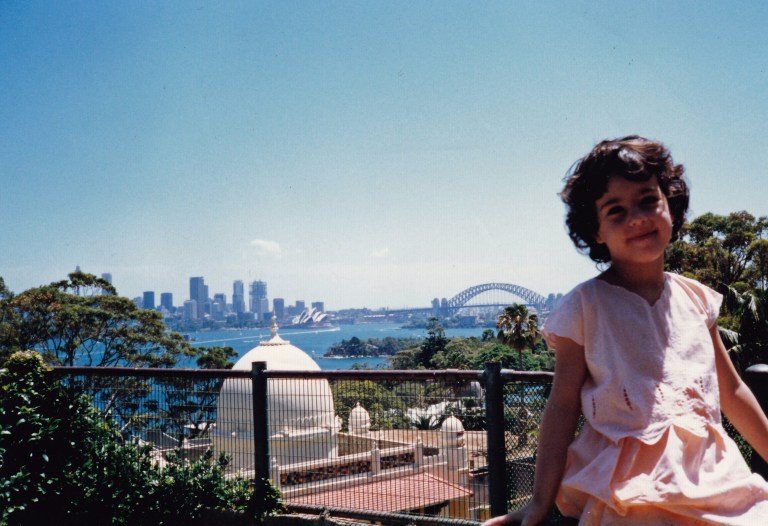 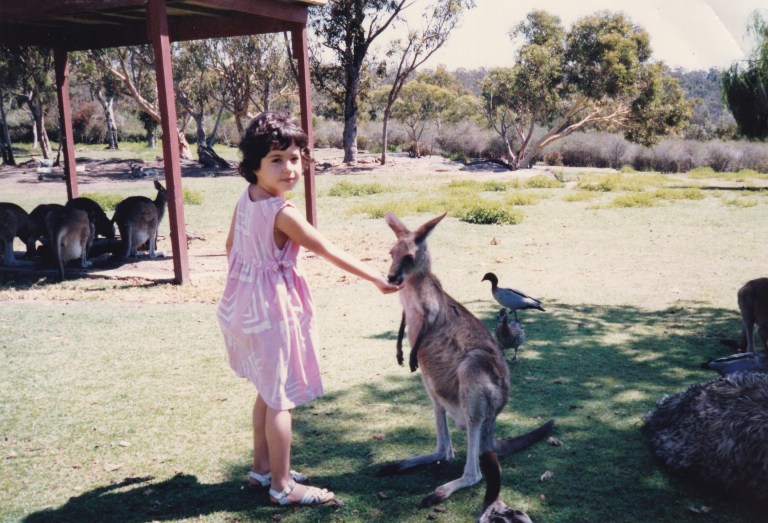 We stopped at the Waratah Wildlife Park (now closed), home of the famous Skippy the Kangaroo. 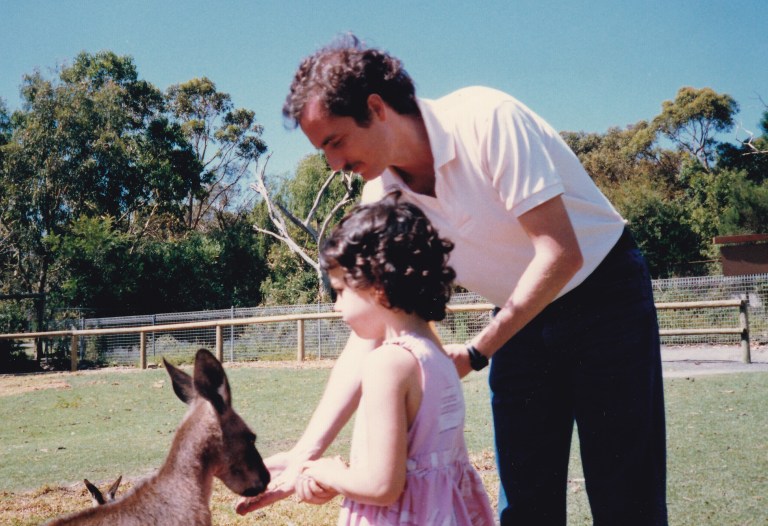 Lisa (5 years) was able to feed and pet the little ‘roos and she thought this was pretty wonderful.

One thing has come to mind: how did we plan this trip? No internet (Al Gore had yet to invent the World Wide Web). Did we buy guide books? Use a travel agent? How did we learn of the hotels, attractions, destinations? I don’t know. I don’t remember.

The same day, we visited Old Sydney Town – a reproduction of Sydney in the late 1800s. Old Sydney Town closed in 2003, and is now used a movie set, so you can no longer snap iconic photos such as this: 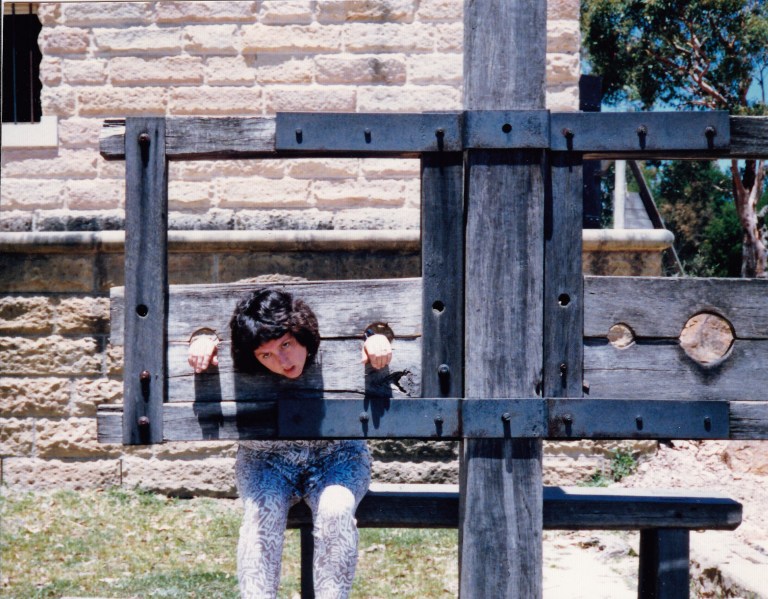 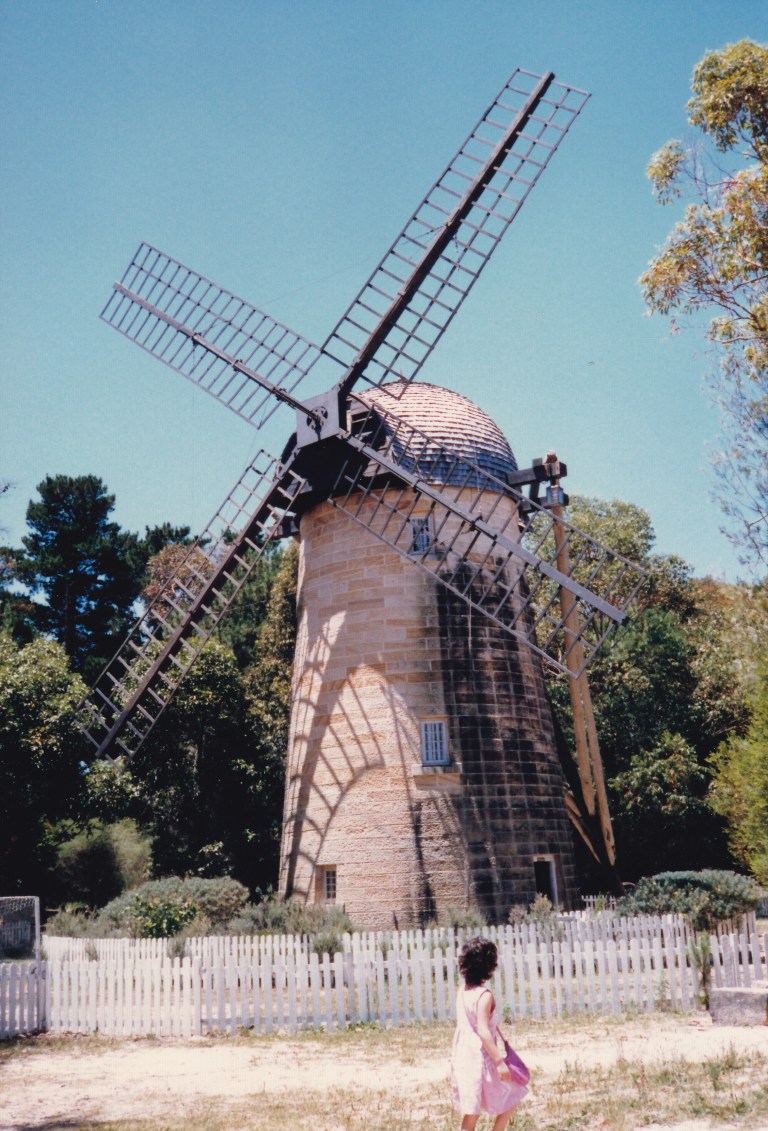 After spending a few days around Sydney, we flew up to Gladstone and took a boat 50 miles off-shore to what is still probably our best vacation destination (and we really have traveled quite a bit) – Heron Island. Heron Island is a teeny little cay (there are only a handful) on the Great Barrier Reef, and only two or three allow overnight guests. There was what I would call a very rustic (1986!) “motel-type” lodge, communal dining, and the most basic of basic accommodations. National Geographic camp… for adults. Desalinated water, making for still-salty coffee. People were here for diving and snorkeling only. Nature, not luxury – but the food buffet every night was just fantastic. We had a sparse motel room. I think it could be hosed-down between guests? 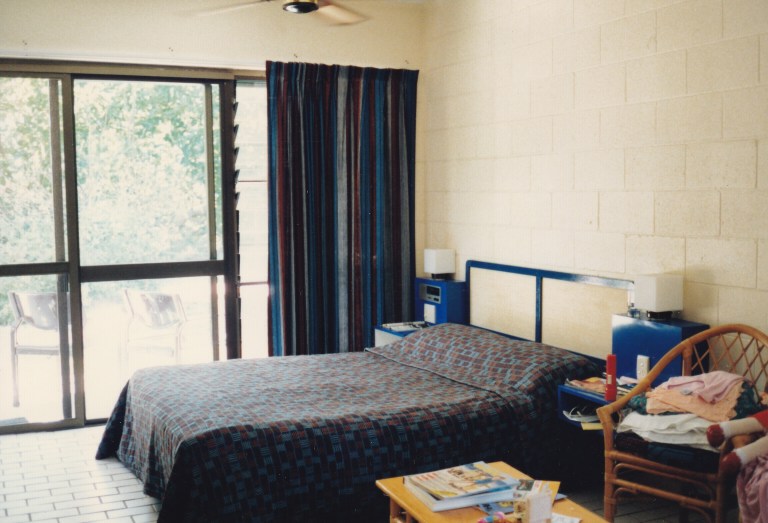 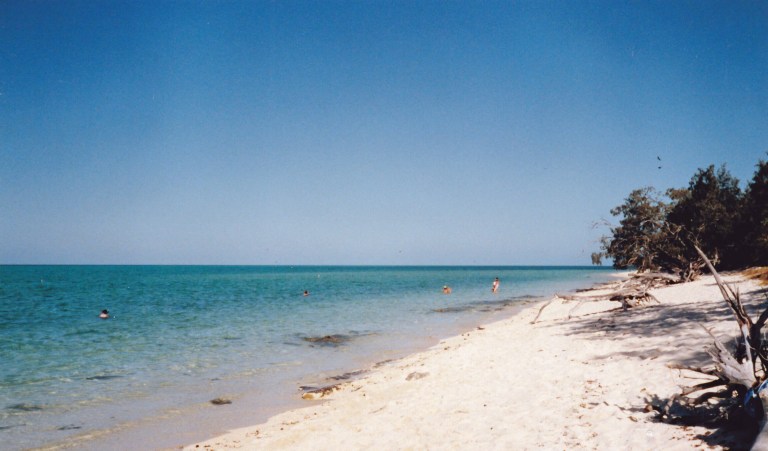 There was bird shit absolutely EVERYWHERE. Our luggage was covered in white splats by the time it was brought from the boat to our room (via a tractor). The staff wore immensely-brimmed straw hats 24/7. Why? Black Noddy Terns nest on the one-mile-around island. They are the strangest creatures. According to the staff, their little legs are great for floating in water and catching fish from the surface, but their legs didn’t work well on land. To reach their nests on the island, the birds basically have to crash into something to break their landing. The first night we were in our room, we nearly called the front desk to report someone was giving/getting a beating in the next room… before we discovered it was just birds crashing into the building while trying to “land” in the surrounding trees. And the noise! Squawking. All. Night. Long. Mother Nature really messed-up on this species.

Our time on the island was magical. We snorkeled with turtles, reef sharks, hundreds of tropical fish of every color, Moray eels, and manta rays. We went below the surface in a semi-submersible submarine. We walked out to the edge of the cay with a naturalist to eat sea vegetables. We performed native bush dances, and drank Fosters beer. Dave jogged around and around and around and around and around the island every day. Nearly every night we watched 50+ year old Green Turtles come ashore to puff-out 100 ping-pong-ball-size eggs into shallow sandy nests… only to return to the sea to have a male pounce on her again. The same night. Ouch. Santa arrived – via helicopter – on Christmas morning with gifts for all the kids on the island (I think maybe 3 kids?).

Amazing thing? Lisa really remembers this trip and is very interested in bringing her children to experience Heron Island one day. 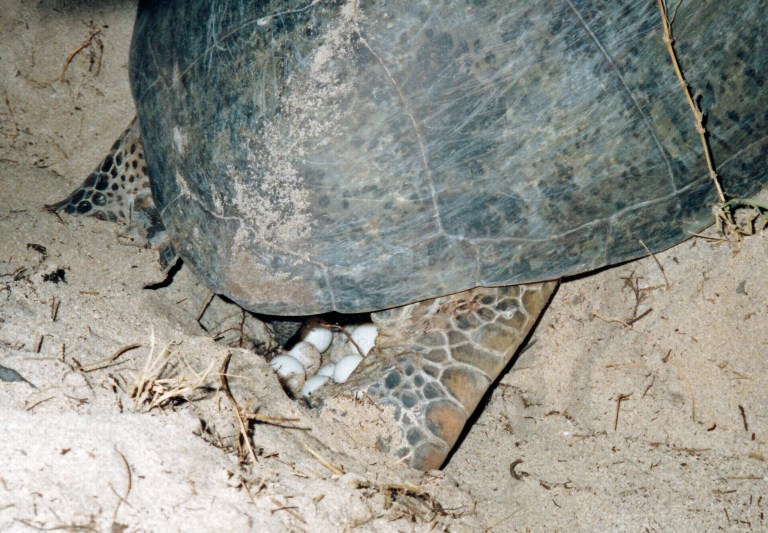 After our island week was over, we took a helicopter back to the mainland. This was our first-ever helicopter ride and it was quite expensive. Fifty miles from shore, and the waters were so clear (and so shallow) we could see schools of hundreds of rays swimming in unison. When we turned to show Lisa, she was asleep! Asleep – and missing the most expensive and magical ride of her life.

Our last stop was to Melbourne, to visit our friends Val and Maurice. We had met them in the early 1980s in Manila while we were all staying at the Manila Hotel. (Dave and I were there six weeks awaiting our household shipment from the US.) We became friends with Val and Maurice, and then their daughters (about our age), and also their grandchildren. 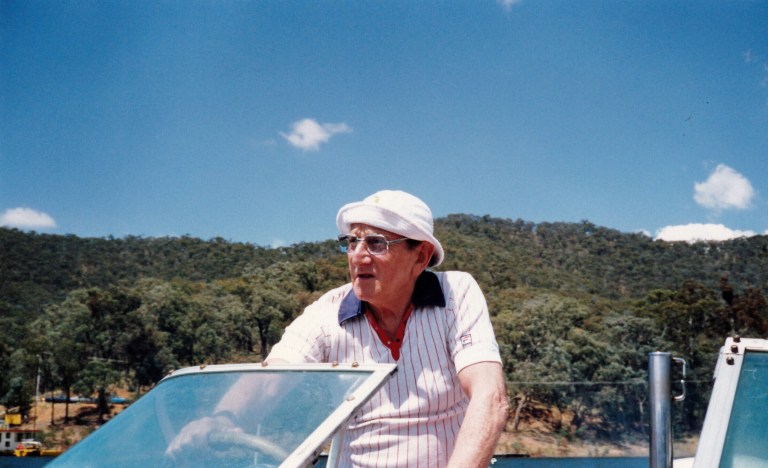 After a day in Melbourne, we all (kids and grandkids) went up to their weekend house on Lake Eildon. The girls fell-back into their old friendship and put-on a musical performance for the adults, before an epic sleep-over. 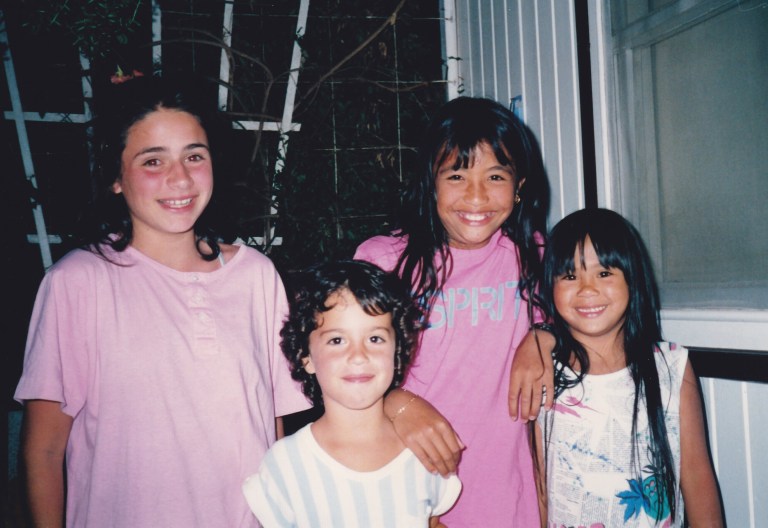 Marnie, Lisa, Marika and Britt
The girls are all now grown (30+) and mothers 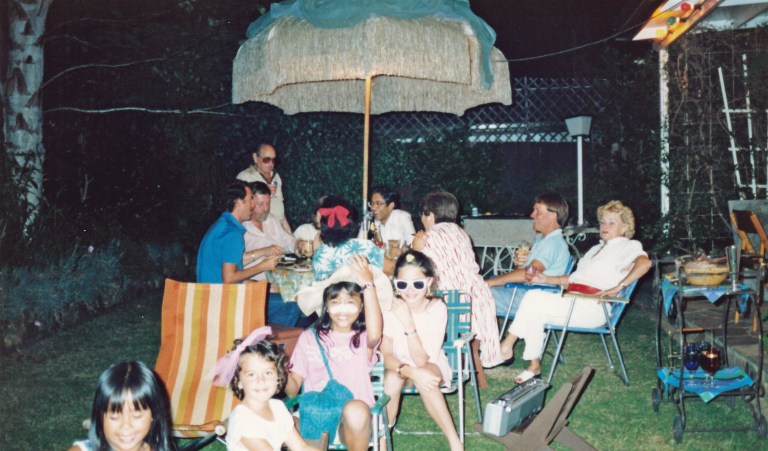 It was just a wonderful trip and one we keep saying we will repeat. Sadly, Val and Maurice passed away after long wonderful lives, but they will forever remain in our hearts as some of the most kind, witty, and generous people we have ever known… and, to this day, Val is the most beautiful woman I have ever known – and she was a needlepointer! We had one of their granddaughters, Selina (Lisa’s age-ish), stay with us for a month years ago, and we are all still connected daily via social media. Old friends.

Then, it was back to Taiwan for us. Back to school for Lisa. Back to work for DT. Back to playing Mah Joong for me.

Until my next update, I remain, your Australian correspondent.