Another Beautiful Day in Florence

Florence, Italy: Our routine continues - up early to watch the morning session from Moscow, out being American tourists from 10-4, back to the room for a rest before the races start again at 5p. Truly a perfect way to watch a track meet. I don't know how many of you have been able to watch any of the events from Russia, but the stands are pitifully empty and I feel bad we decided to watch from Italy instead of Moscow.

This morning we headed out to tour through the Central Market - the main food shopping market in Florence - which has been completely remodeled since our first visit. Though the stalls still sell meat, fish, cheese, produce, breads, etc., there are also shops dedicated to things a tourist would purchase - olive oils, dried pastas, tinned fish and truffled-anything. The market is ridiculously clean and does not have the usual market "aroma". Maybe it is too nice? 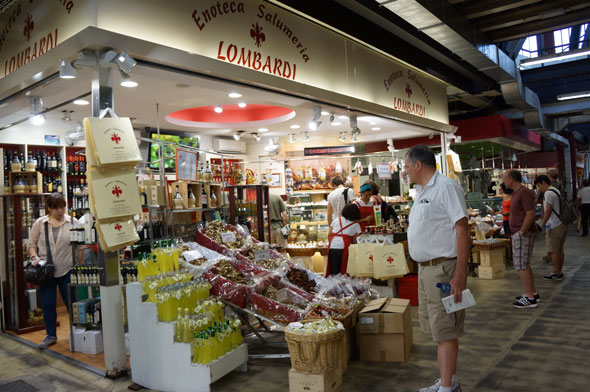 Italian groceries in the Central Market in Florence 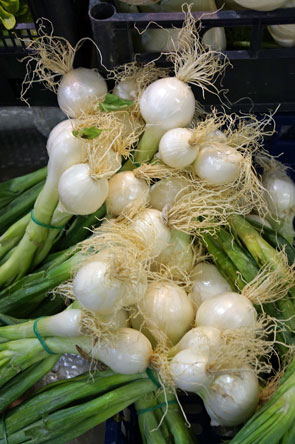 The produce was absolutely perfect 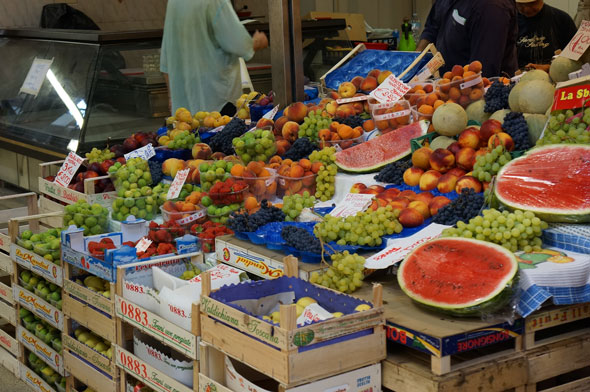 Pretty fruit displays - everything was grown in Italy 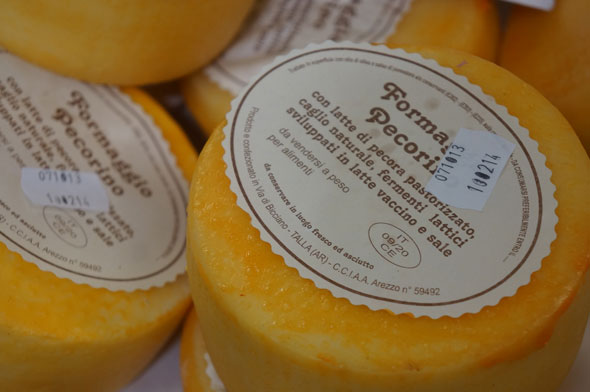 The famous cheese of Florence - Pecorino 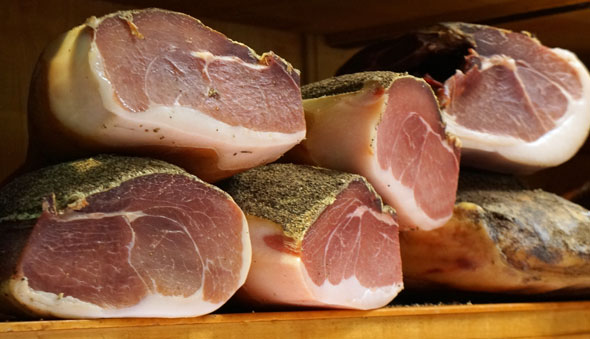 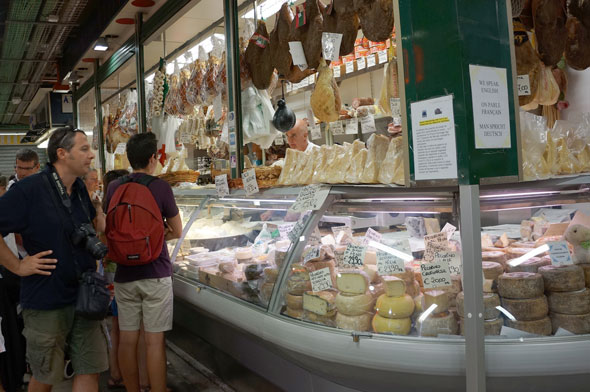 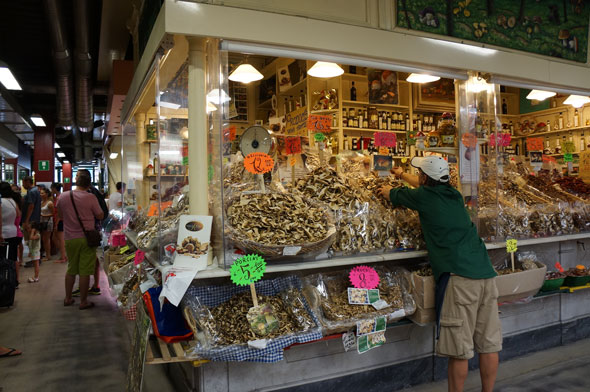 After visiting the market, we stopped for a quick espresso and then headed far from the city center, northeast, to an area we had not explored before. We found a typical residential area and this in a pizzeria window: 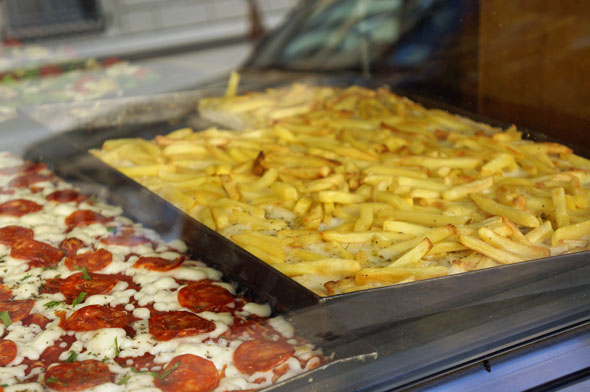 Yep. French fry pizza. And, no, we did not try this pizza. I have no idea why we found this amusing - we have had pizza with corn in Taiwan and pizza with fried egg in Japan. 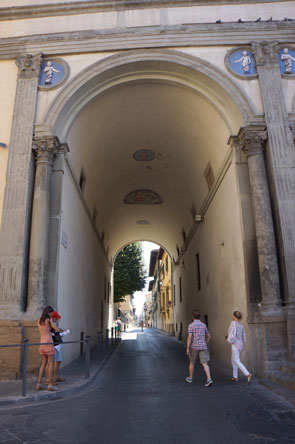 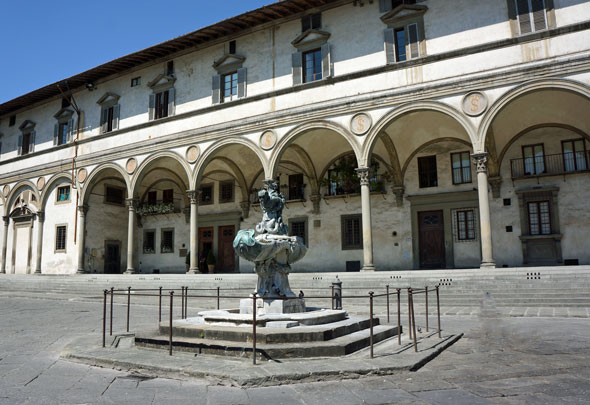 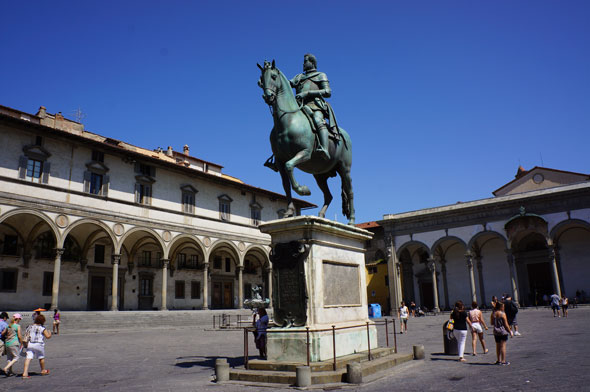 The Florence Archeological Museum is on this plaza - a museum Dave and I had yet to visit. The museum is exhibiting items from digs in the Middle East and from three tombs found in the Italian countryside, ancient Italian artifacts and a huge Egyptian exhibit complete with five or six mummies. The mummies kinda creeped me out. It was odd standing next to a dead human - laying next to an ancient statue or urn - and trying to give them the same consideration.

I so wish the above photos came with explanation, but descriptions were in Italian... probably because we are in Italy. Under the lion statue, there is a hair comb and a bathtub, and apparently ancient Italians scratched their head a lot while riding horses? The bottom photo is a statue of a fat bald guy commissioned for the top of his casket. NOTE TO SELF: have tomb statue carved with my 18-year-old figure, and request pearls instead of Hawaiian lei.

After our tour through the Archeology Museum, we made a visit to the Florence Synagogue. 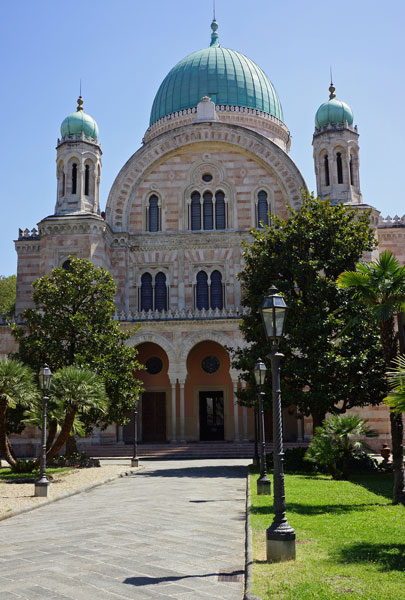 Temple Maggiore was constructed in 1874 in the Moorish style and has a copper roof. The doors to the ark (where the torah scrolls are housed behind the altar) still show scars inflicted by Fascist bayonets. 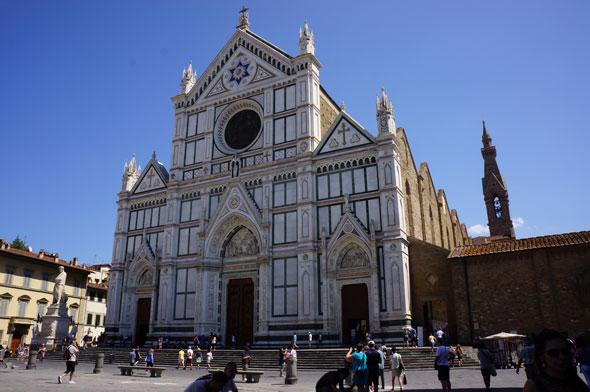 Our route took us past the pretty Santa Croce Church. This church is unique, as a Jewish architect, Niccolo Matas, designed the facade and placed a Star of David at the top. Matas wanted to be buried inside the church with all his fellow artists and friends, but since he was not Christian, they buried him on the porch outside Santa Croce. Close enough.

By now, it was 1 o'clock and we were ready for lunch (no breakfast today) and wandered into a simple little place, Trattoria Alfredo, behind the Uffuzi Museum, that had a prix fixe lunch menu and every patron was Italian. How this place exists so close to the tourist center is a mystery, but my bruschetta was really good - even better than my bruschetta yesterday. 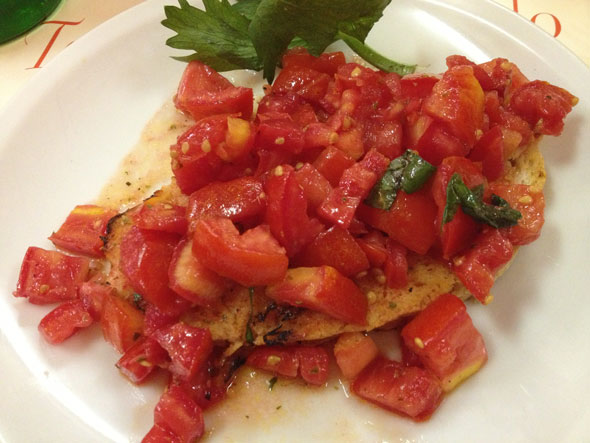 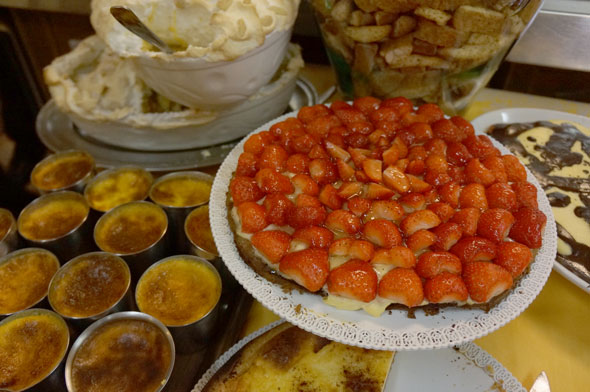 The restaurant tempted us with this pretty dessert table, but we had something else on our mind - gelato. So we walked through the Piazza della Signoria again, said hello to The David again... 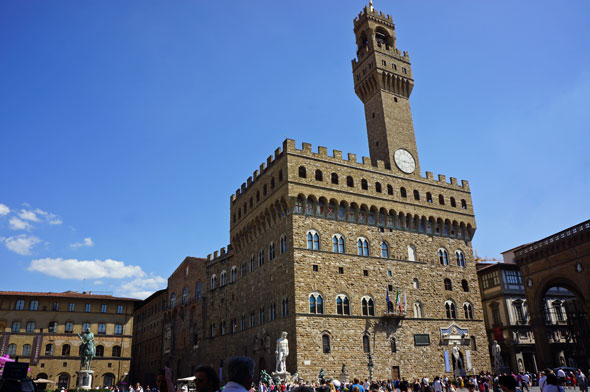 ...and finally had a little gelato! 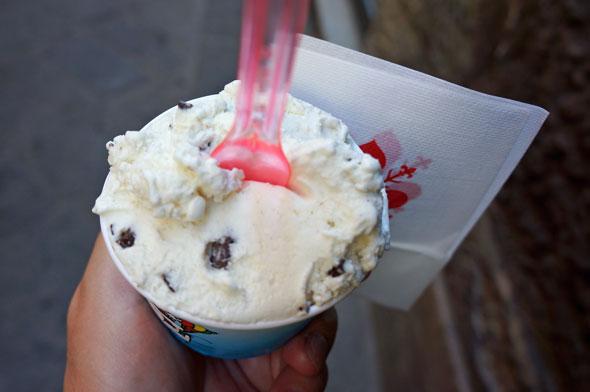 At 8p, after watching the meet from Moscow this evening (where Matthew Centrowitz was the only American to make it into the 1500m final), we strolled down the street to find some wine and a snack. We were both pretty tired after walking the streets of 90° Florence all day, but still went down to the river to see the pretty sunset from the Trinita Bridge. 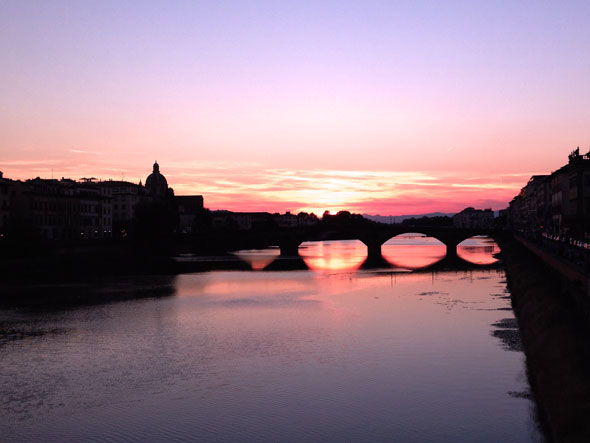 Sunset from the Trinita Bridge 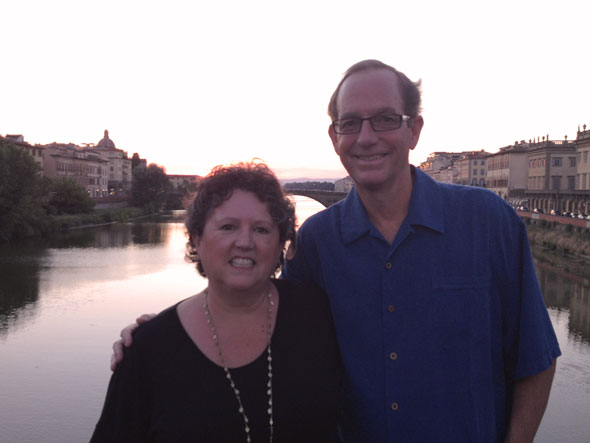 Here we are in Florence, Italy!

About our hotel in Florence