Sacramento, California: Though we woke to clear skies, but by nine o'clock this morning, Sacramento was filled with heavy smoke from the Camp fire in Paradise, California. It was reminiscent of our smoke-filled summer in Portland - also due to forest fires. By the time we left the motorhome, the smoke was burning our eyes. 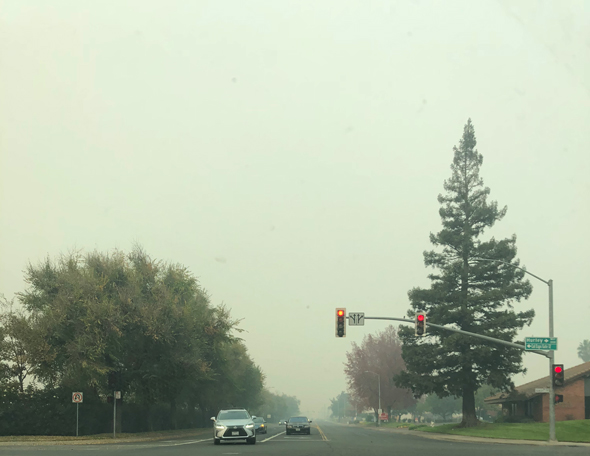 This photo does not do the conditions justice. It is like a beige fog enveloped the State Capitol. Visibility was about one block. Phones were buzzing with "air quality alert" warnings. Not that people wouldn't obviously figure this out themselves? The smell is very strong. Traffic was light - I think no one wanted to venture outdoors.

We were supposed to report to the Pine Cove Tavern, downtown Sacramento, in time for a 2:30p kick-off for the Oregon v Utah (from Salt Lake City) game. We were advised to "go upstairs, behind the liquor store" and this information intrigued us. Hmmm. Sounded dodgy enough to be fun. At the top of the stairs, we were greeted by four fellow Duck fans around a large high-topped table in front of a very large television. It wasn't the fanciest joint in town. It is a friendly neighborhood corner bar, frequented by locals, popular with Karaoke groups, which just happens to be owned by a University of Oregon alum - plus he was on the football team.

The crowd grew to about 20 people sporting the green and gold. Dave went to the bar to grab a couple of beers and told me draft beer was $2 a pint. We settled-in and I was looking forward to a platter of Buffalo wings, when we were informed the Pine Cove serves no food. There is no menu. Just booze.

Dang. I had not eaten breakfast in anticipation of wings (or other bar-type food), and was starving. Our new best friends, Sidney and Alex, told us not to worry: they had brought bags of chips and cookies. What? They told us they meet here often with fellow alums to watch the Ducks. They know the drill, and said the owner has no problem with people bringing their own foods and that we could have pizza delivered to the bar. This was the oddest arrangement I could imagine, but went with the flow. In a few minutes, we had enough pizza and wings for all the Ducks in the bar. 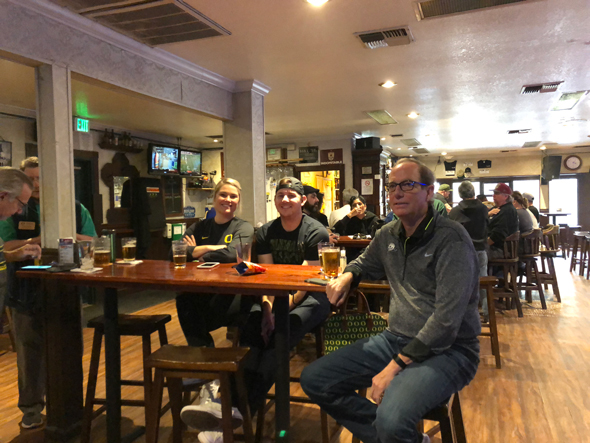 Sidney, Alex and DT, as the game began

The young couple were so sweet with us. The two men on the left-side of the photo are in charge of the local alumni association and organize these events. 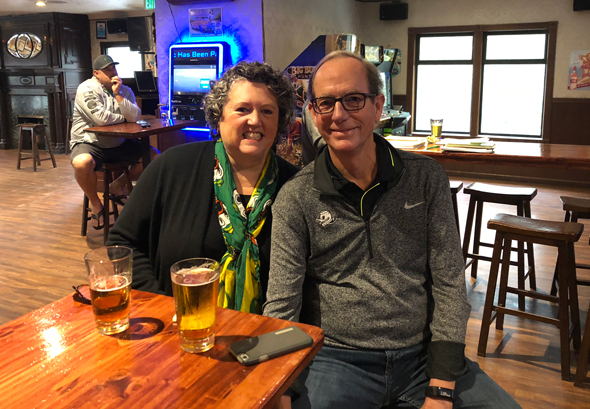 We are smiling in this photo, as the game had just started. We were not smiling by the second half. The Ducks lost 32-25. It was ugly, but we made a few new friends!

RV Park: Cal-Expo RV Park - at the State Fairgrounds. We are in the back flat gravel area (just a huge parking lot) with 50 amp, full-service, pull-through sites. Not exciting, but very convenient for all the folks who pull horse trailers, etc., for the next-door race track. We are paying $45 per night.