Gold Hill, Oregon: Are you tired of reading about flies? We left Merced two days ago, yet we are still fighting flies in our motorhome! Every time we are sure "that was the last one"... another hitch-hiking insect shows up! More than a dozen flies were murdered today by our florescent blue 99¢ plastic "Grizzly Swatter" purchased about 318 years ago from a tourist trap in Cody, Wyoming (just because we needed a fly swatter in our 19' travel trailer).

Enough about our infestation.

Possible World Record Early Departure Time for us this morning! Even though I went out to a grocer and DT went for a run on the fabulous trails along the American River next to Cal-Expo, we were on the road by 9 o'clock! Yeah, us! It was cold and dismal as we began our drive north on I-5.

We did see a very cool bi-plane crop-dusting just north of Sacramento.

Considering we were driving down the interstate at near-60 miles per hour and I had to snap the airplane photos through the window... not too bad... but definitely not as good as the strawberry photo from yesterday: 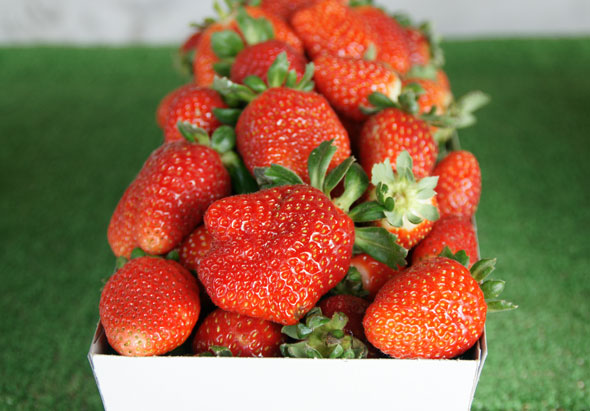 Sorry, but I just can't get enough of this photo (or the berries).

Excuse me. I'll be right back.

We did stop a few times today. Once for fuel at a huge truck stop about one hour north of Sacramento. The place was packed with rows of big rigs waiting their turn at the pump. It took us 45 minutes to wait and fuel, but the price was worth the time spent... and probably why the lines were so long. The second time we stopped was at a rest area just north of Weed that usually has a great view of Mt. Shasta. Not today.

Mt. Shasta: there is a mountain out there somewhere. 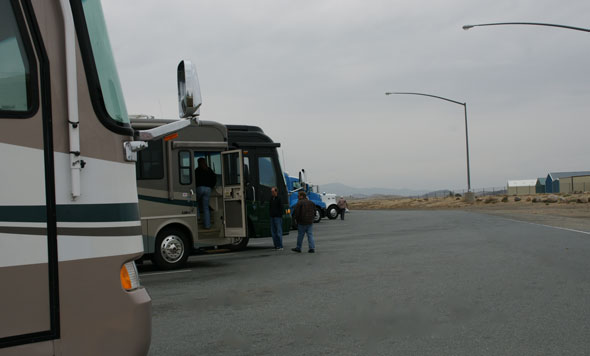 The Magna Peregrinus found a few admirers in this rest area

Our last stop before leaving California, was a visit to the previously-mentioned Liquor Expo at exit 766 in Montague/Granada, California. After parking in front of several "NO PARKING AT ANY TIME" signs, we entered the store only to be greeted by four employees. Oops. Did they want us to move our bus? No, they were just admiring theMagna Peregrinus and wanted to talk about the Stanford game with DT! Prices were much better than Oregon liquor store prices, but not even close to California Costco prices. Beer prices were ridiculously good. DT scored Pacifico for our ASU tailgate on Saturday - 12 pack bottles for $10.99. Muy Bueno! 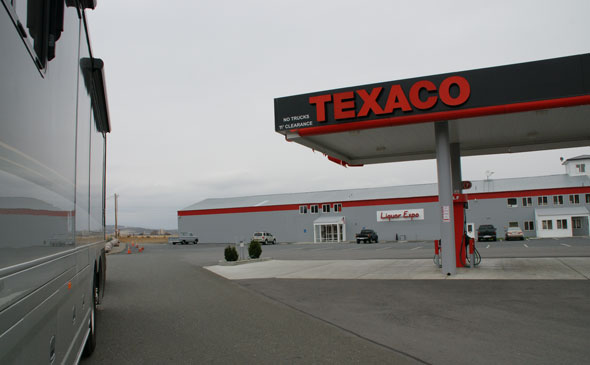 The Liquor Expo - Exit 766 on I-5 in northern California

As we climbed the Siskiyou Pass, the sky turned dark and it began to snow! Only flurries, but the snow was beginning to stick. We knew we had crossed the mountain pass at the perfect time when we met a line of snow plows on their way up to the summit! Be careful out there people. 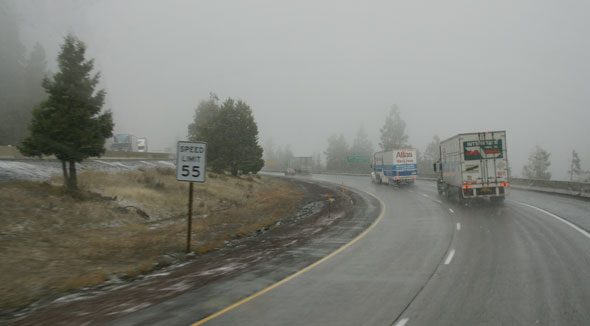 We stopped for the night 40 miles north of the Oregon border. DT had driven 330-ish miles - well over our comfort zone, but it was important to get over the pass instead of being stuck on the "wrong side" of the pass during a snow storm. Both satellite dishes went up, the radiant floor heaters went on and I cooked a lovely meal.

All is right in My World.

RV Park: Medford/Gold Hill KOA - We called about 15 minutes before arriving and they kept a long pull-through site for us. It is in the "long-term camper" area, but is new section is tree-free (great for satellite reception!) and far enough off the interstate that the site is quiet. 50 amp, cable, free wifi, laundry, pool, etc. Though we don't say this very often - we do not recommend this kampground, especially if you have a Big Rig. Sites are very narrow - your front steps will hang out over the grass. Very difficult turns and low branches entering and exiting the park. Though the owners were very friendly, this park is very run-down and filled with live-ins. We paid $31. "Remember. It's not camping. It's kamping."

(And. Remember. That. Stupid. Slogan. Is. Trademarked.)