A Day on the Island

Hong Kong:  Wow, did we cover a lot of territory today. Did we go to even one tourist hot spot? No, we did not. We just took the Star Ferry over to Hong Kong island and walked (and walked and walked and walked) around all day. I took many photos, so will simply present them below with captions. 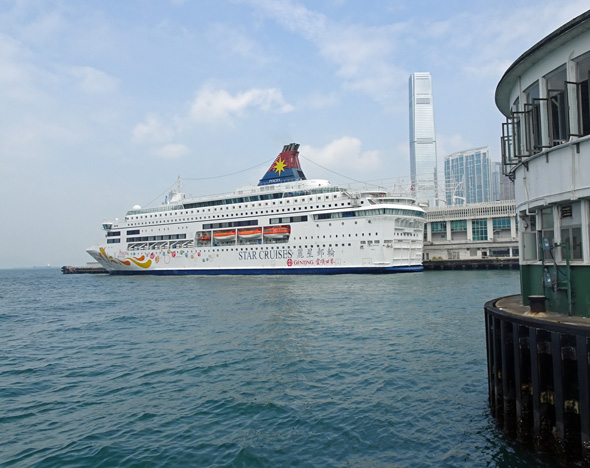 From the ferry terminal - there is a cruise ship in port 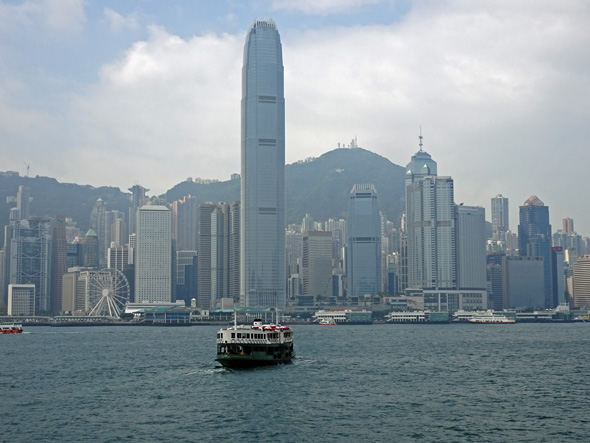 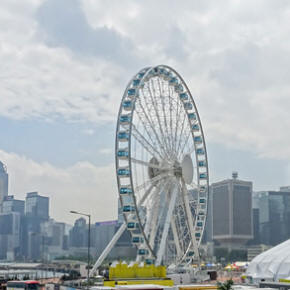 Star Ferry selfie, and the new observation wheel on the island.

Back in the day, the ferry was only ten cents (US) to cross, 35 years later it has climbed to 32 cents. The ride takes about five minutes. 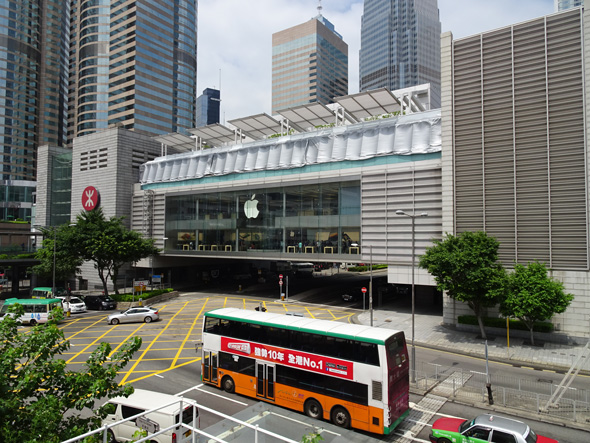 We went into this Apple store that serves as a bridge over a four-lane road -
it makes the huge Apple shop in Los Angeles look like a convenience store. 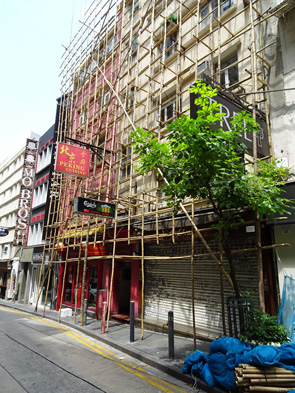 After reaching the island and passing by all the massive skyscrapers and bank buildings, we began to climb the stairways (and sometimes on an outdoor escalator) that provide a glimpse into daily life of Hong Kong - where the people live. There were many streets behind the bank building providing lunch spots for the workers - Italian, Argentinean, Mexican, French, Korean, Japanese, etc., restaurants - foods from any culture or region of the world. (We heard at least twenty different languages today.) Nearly every restaurant we passed offered a fixed-price two-or-three-course lunch special. I love that one of the most modern countries in the world, with amazing glass skyscrapers, still use bamboo scaffolding.

We found ourselves in front of a French bistro about lunch time... and since we had not eaten a thing all day, decided to step inside. 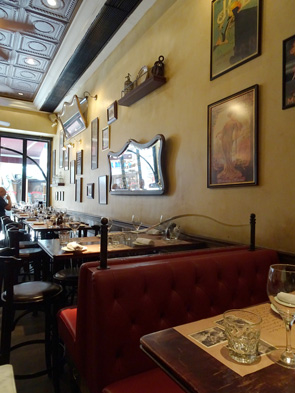 Steak Frites and dessert - $17. We were very happy with our lunch and service at Bouchon Bistro (no relation).

The rest of day, we simply walked and poked our head into shops, until we could walk no more. Below are a group of photos that either require no caption, or if they do require a caption, I am unable to provide one due to the fact I have no idea whatsoever what it all means. Enjoy: 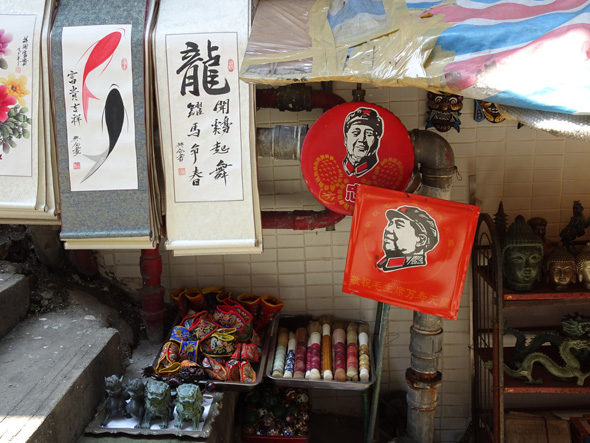 Though Hong Kong is filled with modern supermarkets with meat displayed on pink styrofoam trays, we found many small outdoor stalls vending fruits and veggies today - and then somehow found ourselves inside a huge multi-story open market, in the shadows of the soaring commerce towers. 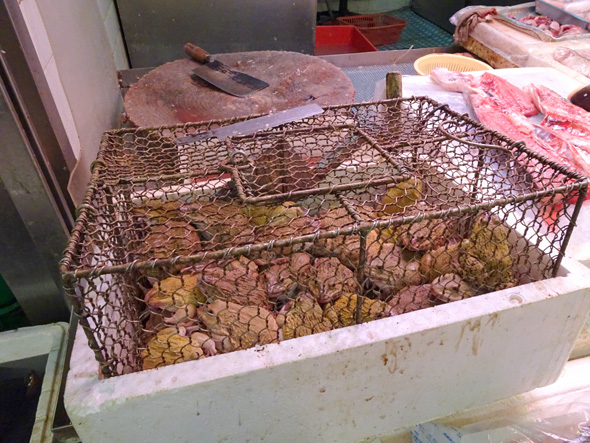 Yes, this is a cage filled with frogs... and no, this is not a pet shop.

By now it was getting late and the workers would soon be leaving their banks and the ferry would turn into a commuter-filled mess, so we returned to the Star Ferry, back to Kowloon and to our hotel (with another mile walk-about and a coffee at Starbucks where I was able to use the app on my phone to pay for our drinks!). 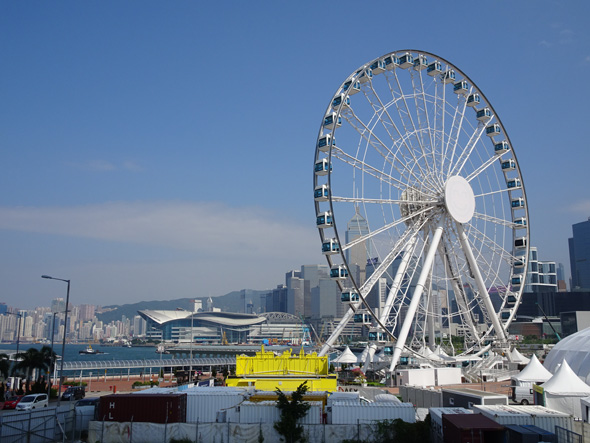 Another view of the year-old observation wheel 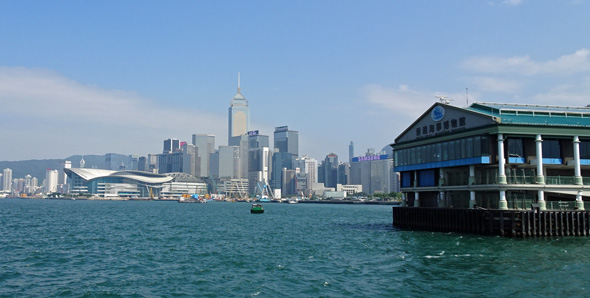 From the ferry: the wave-roofed building is the HK convention center. 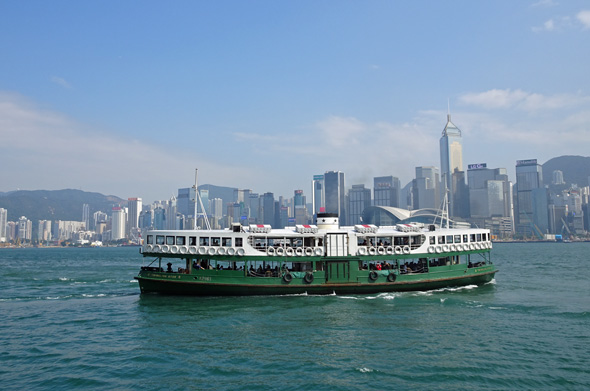 After a rest in the room, we stopped in the hotel lobby bar for a cocktail before setting out on our next adventure. Luckily they also gave us a bowl of cashews as the nuts had to fuel us for the rest of the evening!

We took the subway (simply the easiest way to get around Hong Kong) to the Temple Street Night Market. A night market is a place where people gather in the evening to shop and eat in small pop-up stalls or stand-alone restaurants. Food is cheap and plentiful. Goods are cheap and you can buy anything from socks to mahjong sets. Bargaining is a must. We walked up and down the streets, checking out the stalls. We didn't buy anything, but certainly had a fun time taking-in all the sights. 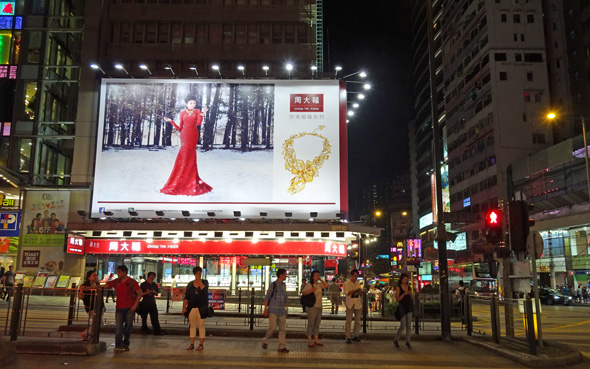 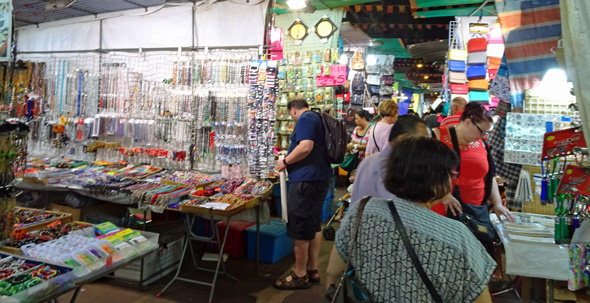 Temple Street Night Market. A whole buncha junk. Fake purses. Fake watches. Why this market isn't raided by the authorities is a mystery to me. I really really really do not like knock-offs. Have I said this before? Every day we have been approached by street hawkers to buy "copy" Rolex and designer handbags. 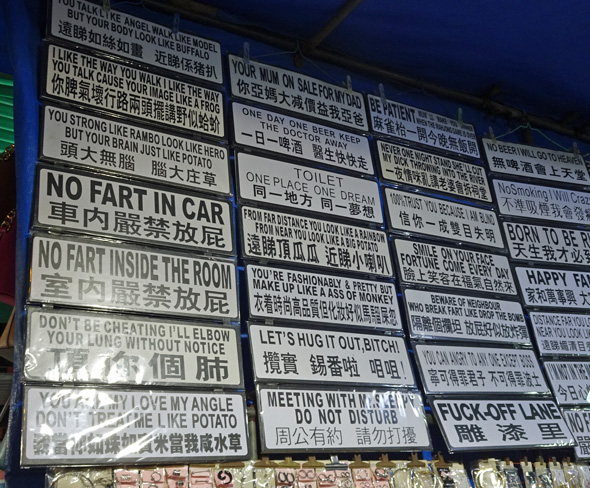 These signs are real. And hilarious, assuming there is something lost in translation. Don't be cheating I'll elbow your lung without notice - and apparently being called a potato is a very bad thing? 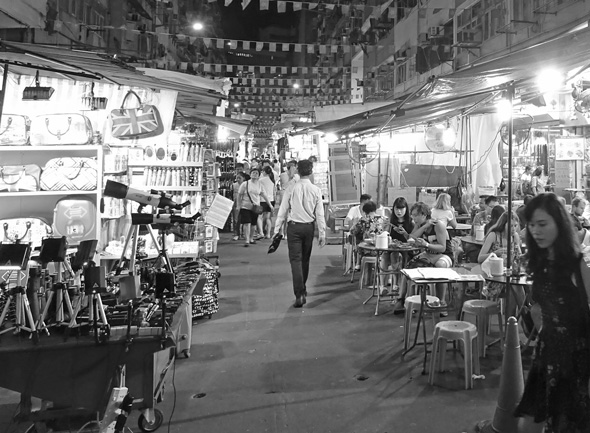