Eugene, Oregon:  Dear Reader, I am exhausted. It is a lot of work scoring 72 points against the University of New Mexico Lobos. Tonight, I will just post a wholebunchaphotos with captions and call it a very early night. 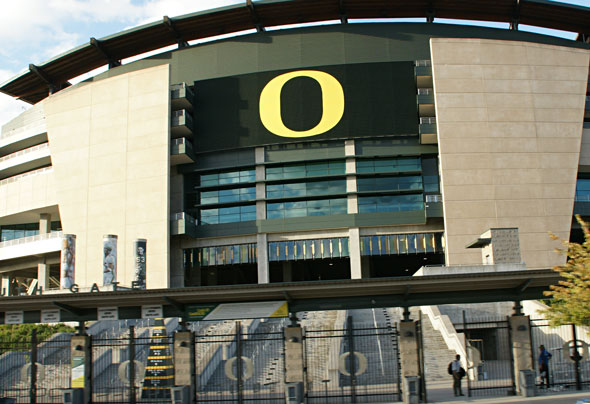 The gates to the Autzen Stadium parking lot open four hours prior to kick-off. We arrived about 9:30 this morning. 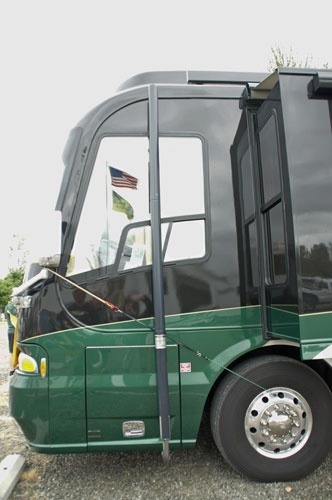 The planned suction-cup idea to stabilize our new generator exhaust system did not work, but only because the suction cups we bought were a bit flimsy. No worries, DT rigged a bungee cord situation and all was well. (We will find larger suction cups next week.) We are so happy with our new generator exhaust system. We did not smell the exhaust at all and we ran the generator for about two hours. (Our solar panels on the roof were happily sucking-up all those free solar rays shining on Autzen Stadium this afternoon.)

It never rains at Autzen Stadium.

Three families tailgate together in three RV parking spots. We only bring two RV's so the middle space is free for socializing, and we squeeze-in enough to park a car or two as well. This works well - and if it is raining, we can park close enough together that our awnings create a large covered area.

Before the rush! Fans are slowly arriving. By the time the game starts, there isn't a parking spot for miles. 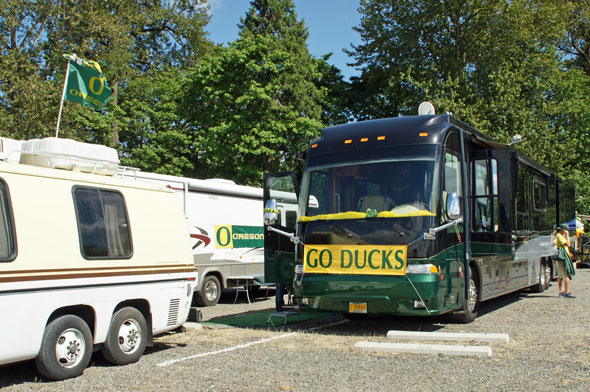 DT really decorates the Magna Peregrinus for the games. 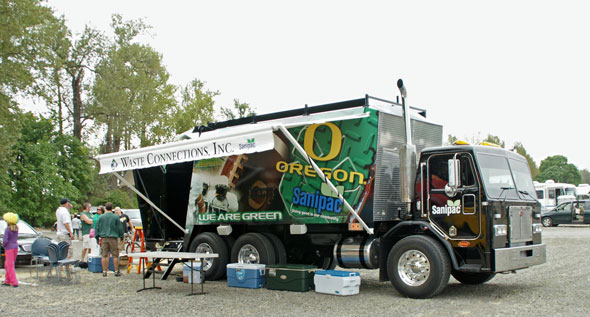 I am not sure how to describe our new neighbor at Autzen. I could say they are "trashy" as this tailgate vehicle is made from a garbage truck! Sanipac, the local Eugene trash and recycling company has produced a very unique vehicle. Televisions hang from the outside. Inside they (will eventually) have educational displays promoting their company and recycling. 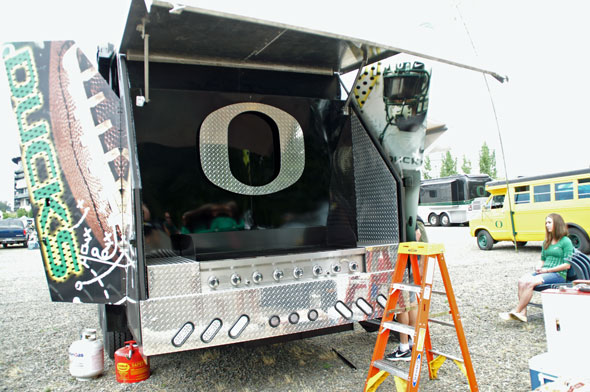 The rear panel opens to reveal a huge grill! The crew said they worked until four o'clock in the morning to prepare the rig for the home opener at Autzen Stadium and still have more work to complete as the vehicle is being shipped to Knoxville in a few days for the Oregon v Tennessee game next week! 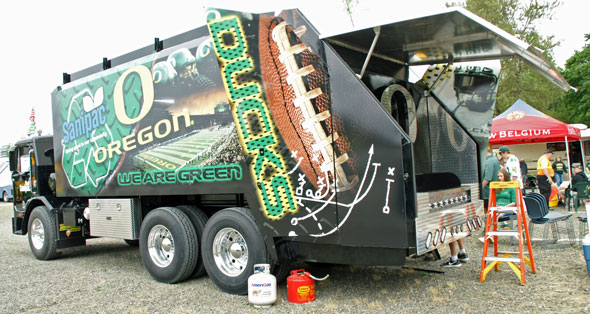 I am sure they do not get very good fuel mileage, but they will get a lot miles in public relations. A very cool tailgate vehicle. Especially since it features three beer taps. 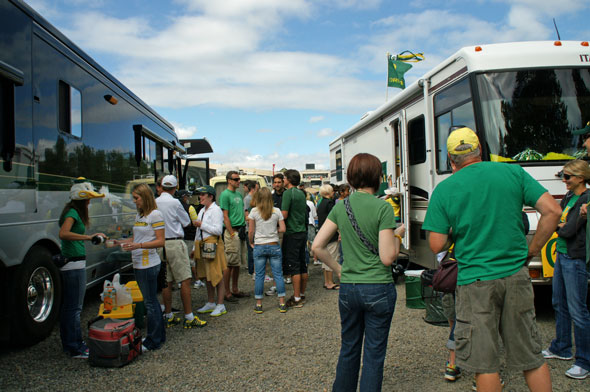 Meanwhile, back at our tailgate... people were starting to show up. We ended up hosting about fifty guests today. Quite a large crowd considering Oregon students do not start classes until September 28th. It was just a beautiful day! 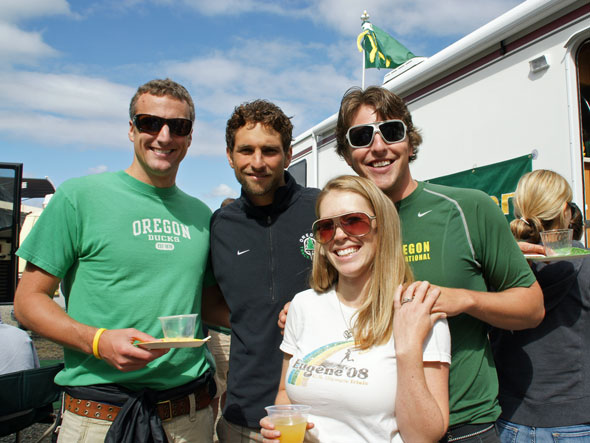 Of course, Rob joined us - along with triathlete Jesse Thomas and his brother and sister-in-law. 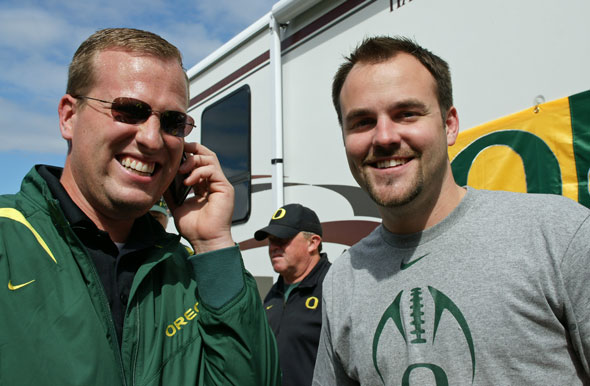 Brandon, our housesitter and our friend, Jake. 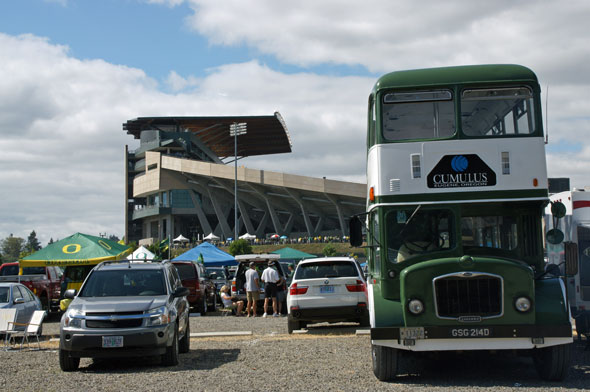 Beautiful Autzen Stadium was a great place to be today. The Ducks beat the University of New Mexico 72-0, covering over 720 record-setting yards. Our new QB, Darron Thomas (aka D.T.) started the game and brought the score up so much, the Ducks put in the back-up quarterback. The back-up quarterback delivered so many points, they put in the third-string guy and I was getting ready to strap on my helmet just before the game ended. Whew. Most of our tailgate guests starting returning to our party in the 3rd quarter. They caught the rest of the game on our outside TV and finished-off all the food. Yeah! It was a great kick-off to what will be another great year of Duck football.

Here is a video of highlights - 72 points scored in a ten minute video. Enjoy!

Did I mention we are flying to Tennessee in a few days to watch the next game in Knoxville?

« Getting Ready Meanwhile, back at the ranch… »