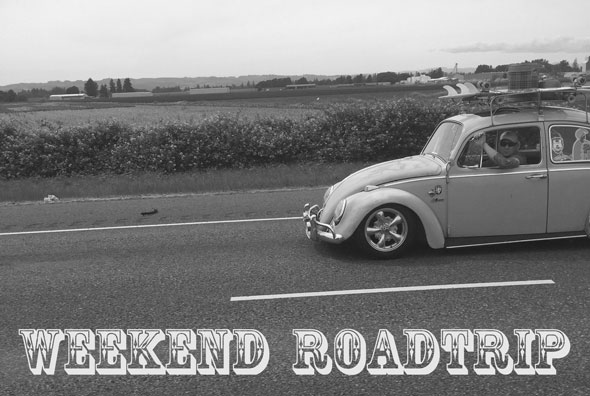 TrackTown, USA:  Hello from Eugene, Oregon! Dave and I hopped in the Tahoe (because my old Honda is making a horrid whirring noise) this afternoon and pointed it south on I-5 to Eugene so we could attend the Prefontaine Classic track meet (known simply as "The Pre") tomorrow, the "Pre-Pre" tonight and a fun new gathering dubbed the "Pre-Pre-Pre".

This weekend marks the 40th anniversary of the death of legendary American distance runner, Steve Prefontaine. "Pre" was a native Oregonian (Coos Bay) and ran for the University of Oregon. Dave was Pre's teammate and our friend. Steve Prefontaine was killed in a single-car accident while only 24 years old. His death shocked the community, but Prefontaine is revered to this day. After his death, a track meet was named in his honor and has grown from a well-attended meet to an official IAAF Diamond League extravaganza shown live on NBC.

I know this all sounds very sad, and it is... but for a man who only lived 24 years, his image is now larger than life. He is an icon to thousands of runners (especially high school boys) and the legend seems only to grow stronger and Pre lives forever in the hearts and minds of his fans.

Since 2015 marked the 40th Anniversary of Prefontaine's death, Pre's college roommate (our friend, Steve) decided his old teammates and friends should gather at the tavern in Eugene where Pre once worked to reminisce and tell tall tales.

The Pad was famous, at the time, for three things: 1) Pre tended bar a few nights per week. And by "bar", I mean "beer". 2) Another employee, the elderly Bea, made great burgers. Forty years later, the burgers are still called "B" burgers in her honor. 3) Back in the day, Tuesday was ten-cent hotdog night and a pint of a beer was 25 cents. Poor starving runners were often seen at The Pad on Tuesday night enjoying a healthy low-cost training table. The tavern has quite changed since the 1970s. Once a dark and really dingy room, The Pad now has skylights to bring-in light, a full menu and a full-bar. Friday night is Prime Rib Night! Somewhere... Bea is shaking her head. 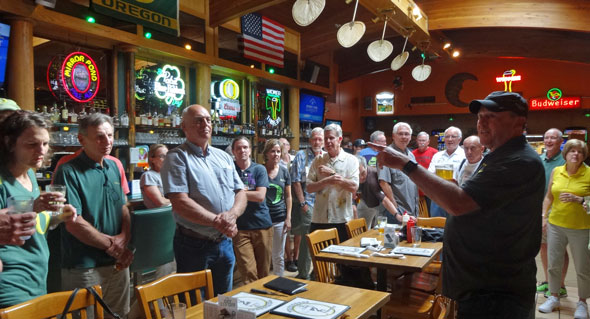 Steve welcomes Pre's old (most are now over 60) teammates and friends and encouraged them to speak. A few beers (now costing quite a bit more than a quarter) helped to set the mood. 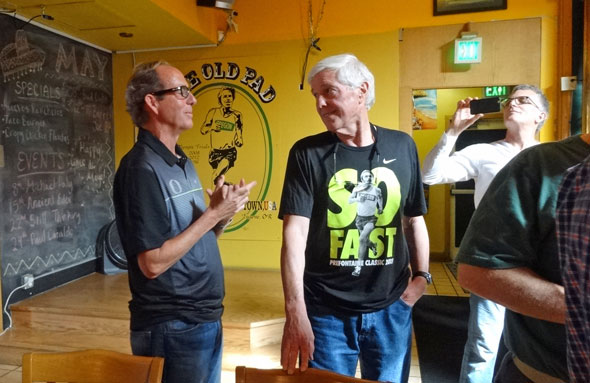 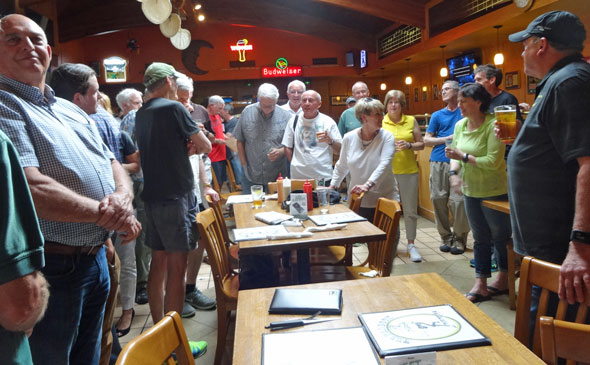 Everyone has a tale or two to tell about Steve Prefontaine 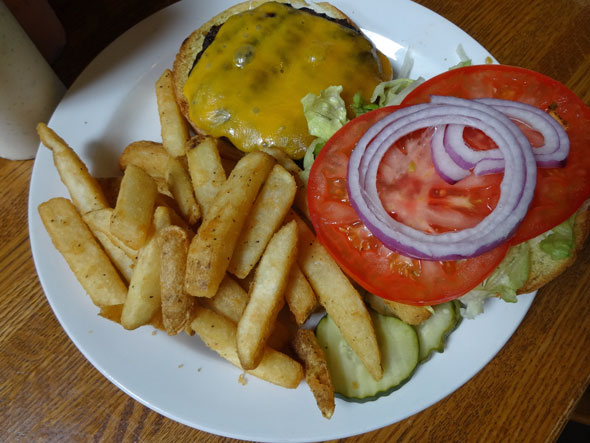 Dave and I split a B Burger. I mean, we had to order one, right?

Thank you, Steve, for arranging this fun afternoon. Maybe the Pre-Pre-Pre should be an annual event?

PS: I apologize to patrons who had simply stopped-by The Pad for a cold beer after work Friday. This reunion took-over the joint.

After the Pre-Pre-Pre, we went to the track to watch the Pre-Pre races. The idea of holding a few races the night before the Prefontaine Classic started in 2011 when - for some reason - Kenyan Moses Mosop (or his agent) decided it would be a good idea to set a new world record for 30000m on the track. 30000m is about 19 miles and requires 75 laps around the track. But who's counting?

Moses Mosop became the new world record holder that evening in 2011 (one hour, 26+minutes) and a new tradition began - a fun race or two the night before the Prefontaine Classic. The event would be free and open to the public. The Pre-Pre was born!

During the Pre-Pre meet in 2012, Kenya held their men's 10000m Olympic trial race to determine which racers Kenya would send to the London games. Why not? 9000 people showed up to watch. In 2013, the organizers showcased an "American Only" men's 1500m. The meet in 2014 featured Duck Galen Rupp setting a new American record in the 10000m and Maggie Vessey wearing a scandalous kit. 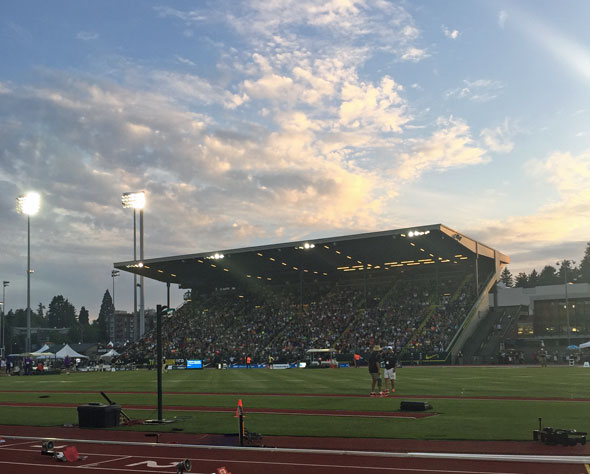 Over ten thousand fans filled Historic Hayward Field this evening to watch a handful of races. The best high school 200m and mile runners in the country were flown-in to face each other for the very first time. They were given new uniforms, racing spikes and treated like royalty. We are pretty-sure every single one of them win every race they enter - until tonight. Tonight they were racing against the best in the country, not the best in their school district or state. 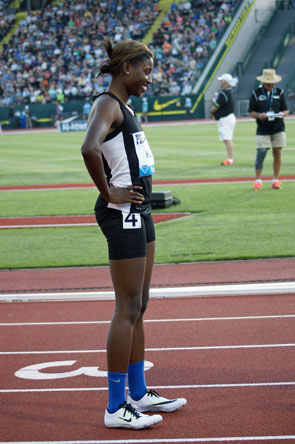 It was all nerves and smiles for the girls 200m 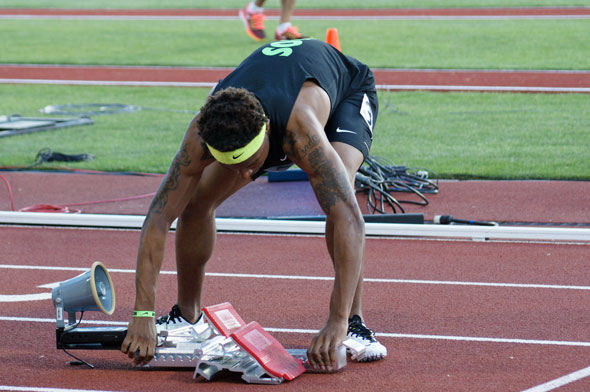 Also, the best high school milers gathered in Eugene to race tonight, along with a professional women's 800m and long jump, and men's 5000m and 10000m runs. 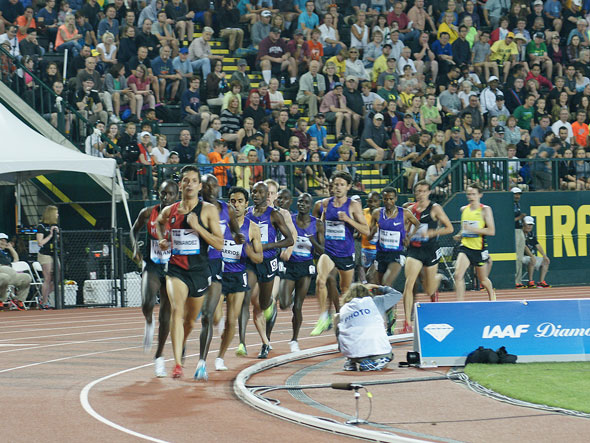 England's Mo Farah, 5000m & 10000m Olympic and world champion, won the 10000m in 26 minutes, 50.97 seconds. Mo was unhappy with his time and complained about the pacesetters. A bit odd to me. Farah is not a weenie. His time was the fourth-fastest ever at Hayward Field. Canadian Cam Levin set a new national record, 27:07.51, for our neighbors to the north.

NOTE: I am not a sports writer. I am just a track fan with a camera and a blog.

NEXT UP? Look for my report from the Prefontaine Classic soon.

Until my next update, I remain, your "what a night" correspondent.

« Long Ago and Far Away The 2015 Prefontaine Classic »