Autzen Stadium is an amazing football facility which has enjoyed several major updates. It is arguably the loudest stadium in the NCAA, and has state-of-the-art training amenities for the athletes. The locker rooms (we toured in 2014) are nicer than most NFL teams. You know how many NCAA Championships the University of Oregon football teams have won?

The Fighting Duck basketball teams played 84 years in McArthur Court, another beloved arena on campus. Mac Court was very intimidating to opponents, and was famed for noise, vibration, and fervent fans. (When DT was on the track & cross country teams, his locker was in the bowels of Mac Court.) Finally, the huge wooden building was replaced (it seemed like a fire marshal's worst nightmare), and the University was gifted a new basketball arena in 2011. The new Matt Knight Arena is also one of the best college stadiums in the country, with amazing locker rooms and training facilities for the athletes (volleyball is also housed here). The fans have chairs with backs and handrails everywhere. Elevators. Plenty of toilets. Many shows and concerts are held at Matt Court, providing even more revenue for the school. You know how many NCAA Championships the University of Oregon basketball teams have won?

One. In 1939. (It was actually the first-ever NCAA tournament held.) 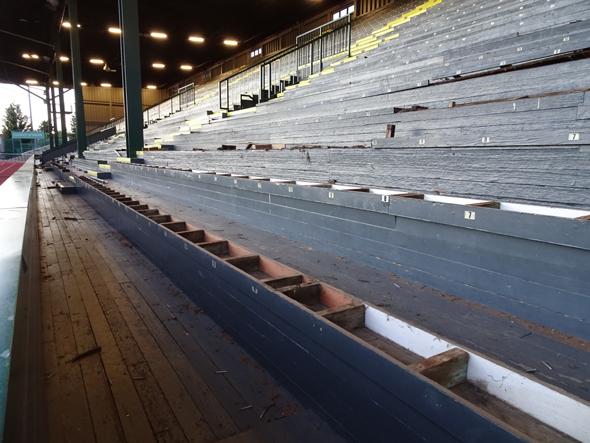 The University of Oregon Track & Field and Cross Country teams have won 31 NCAA Championships. 31. THIRTY ONE! They have sub-standard training facilities, and must go to the football stadium (don't forget - across the river from the track!) to use the space and training equipment. The locker rooms they use at the track are pathetic and ancient. (This cannot be a great view during a recruiting trip.) The new track stadium will have the latest training equipment, indoor running, jumping and throwing space (remember, it rains quite a bit in Eugene!), locker rooms, therapy and massage areas for the women and men. The facility will also host a lab for the Department of Human Physiology and the Bowerman Sports Science Clinic.

Yes, Hayward Field is Historic, but it is also rotting. There are no hand-rails in the grandstands. No seat-backs. I am barely five feet tall and have no leg room while seated in the east or west grandstands. What, sixteen toilets for 9,000 people? It is an OSHA nightmare, but since the bleachers have not been updated in any way since being installed a hundred years ago, they are not required to meet the safety codes of today. (I believe the term is grandfathered-in... forget the Americans with Disabilities Act.) Another thing is the track fan-base isn't getting any younger. Looking around the stands during the NCAA meet last week, I noticed a sea of wrinkled faces and grey hair (including myself). Every track meet, an old dude takes a header (remember, no hand-rails).

I'm confused by people who think a new modern stadium will not be "the same" and the Hayward magic will be lost. Huh? How? I'm offended hearing of people say Oregon legend, Steve Prefontaine, wouldn't like the new stadium, or famed coach, Bill Bowerman, would be rolling over in his grave if he saw the design. Bull poop! Pre (who died 43 years ago, and would be 67 today) fought for better training conditions, and helped create a path for post-collegiate track and field athletes to earn money through endorsements, sponsors, and prize money. Bowerman worked to create the best footwear and training techniques for track and field athletes. Why wouldn't he want his team to have the best training equipment and stadium possible? It's a ridiculous argument.

It won't be the same. It will be better.

Many types of meets are held at Historic Hayward Field - all-comer meets, high school state championships, college meets, and meets for the pros. In 2021, Oregon will host the World Track & Field Championships - the best in the world - in the new stadium. Can you imagine the thrill, as a competitor steps onto the track, under the lights, to the roar of 30,000 fans in a gorgeous new stadium? Goosebumps.

The University has the opportunity to have a track and field stadium fit for Olympians. FREE - all from donations, mostly from Penny & Phil Knight. Seems like a no-brainer to me. I just hope they build one massive trophy case to hold all the NCAA Championship trophies the track & field and cross-country teams will to continue to earn. 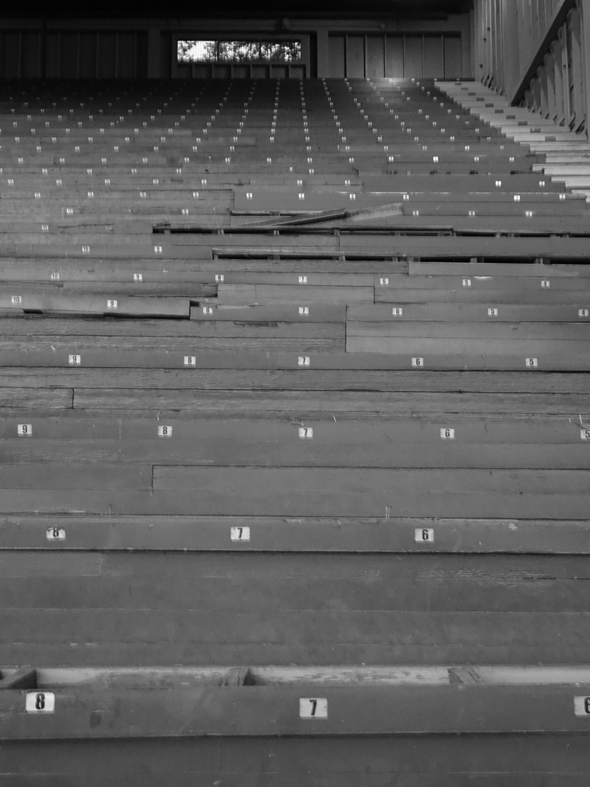 Until my next update, I remain, your "let's do this" correspondent.

You May Also Like:
Drawings of the new stadium & history of track at Oregon
Steve Prefontaine at Wikipedia
Bill Bowerman at Wikipedia (He was a war hero!)