The weather tried to cause a little trouble this morning, but we are Oregonians (though we are rarely in Our Fair State much these days), so did not let a little liquid sunshine get between us and another food tasting! We actually walked from our hotel to the event in heavy rain - in sunny weather. Yes, even when sunny, it is raining in Oregon.

While the event last night featured foods from across America, today's tasting was All Oregon, All the Time - the Oregon Bounty Grand Tasting, sponsored by Alaska Airlines. Alaska Airlines is testing a program that allows visitors with an incoming Alaska Airlines ticket to bring a case of Oregon wine back home with them, as checked baggage, with no baggage fee. Yes! What a wonderful idea. Book your trip now.

Oregon Bounty was held in Pioneer Courthouse Square - a large bricked block in the heart of downtown, right on the light rail lines. It was the same deal as last night - get your wristband, get your wine glass and stuff your face. 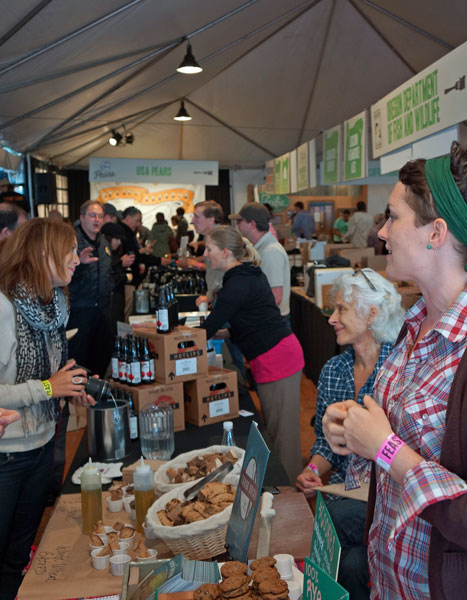 Y'all know I am very proud of My State and love to promote the wonderful products and clever people. It was just so interesting for me to meet the faces behind so many of the products we enjoy. 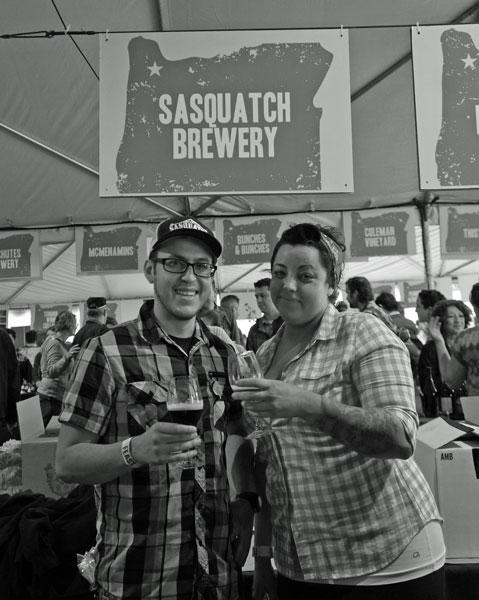 Because we are a group of food-crazed people. 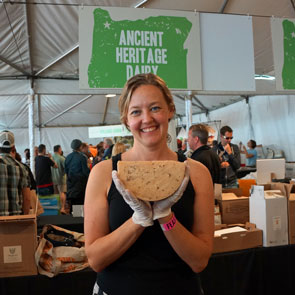 Ancient Heritage Dairy is in Madras, Oregon - an area known more for cowboys than cheese. They produce several varieties of cow and goat milk cheeses. Today we sampled their Hannah Cheese - a blend of cow and goat cheese, made with raw milk and aged for over 100 days. Really lovely and it will be on our table next weekend. 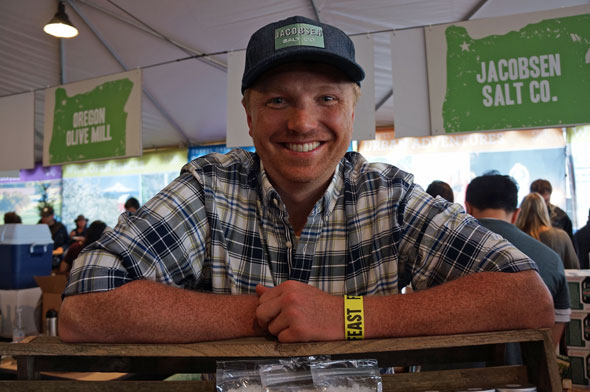 I was happiest to finally meet this guy - Ben Jacobsen - of Jacobsen Sea Salt. I love his salt and I love that he is making salt from Netarts Bay - near Tillamook, Oregon. (Well, two guys did make sea salt on the Oregon coast in 1805.) Thank you, Ben, for making my recipes taste better. 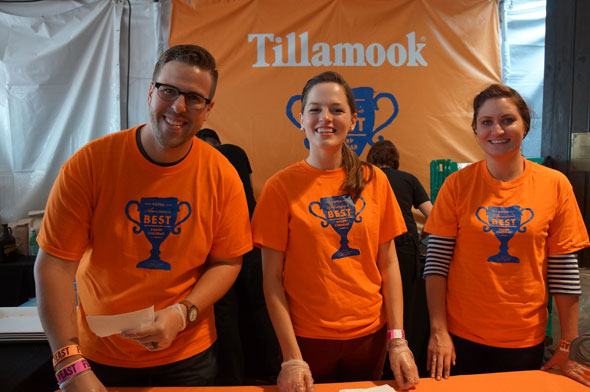 No Oregon food festival would be complete without one of our most famous companies - Tillamook Cheese. Guess what they were serving today? 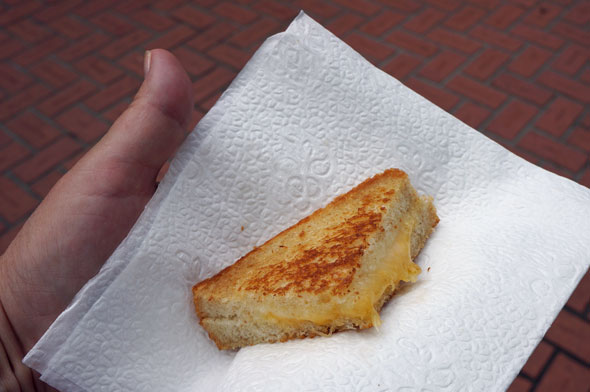 Speaking of cheese and other orange things, after a 40-year hiatus, Oregon State University is once again making cheese. We Ducks sampled the semi-hard cheese, called Beaver Classic. I'm not going to say it was the best cheese I have ever tasted, but they certainly have a very clever slogan. 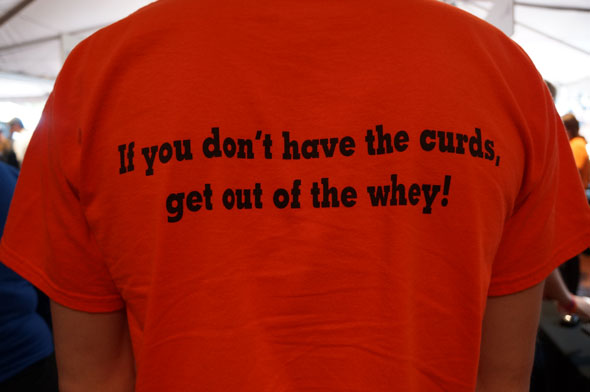 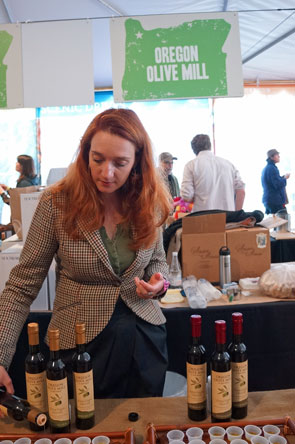 Oregon Olive Mill were on the table at Lisa & Lenny's wedding dinner. Randy Kiyokawa (right) of Kiyokawa Family Farms poses with a massive apple from his orchard in Parkdale, on the slopes of Mt. Hood. 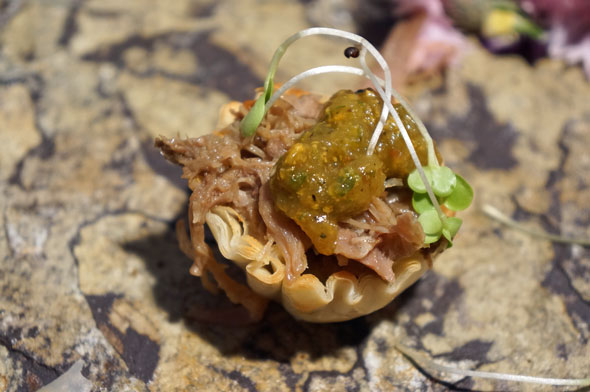 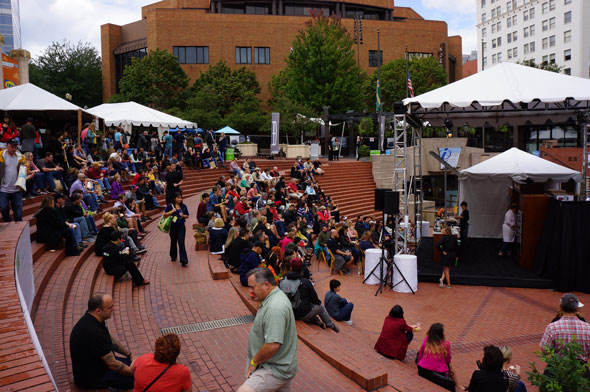 Beast and Expatriate cocktail lounge, make a souffle on the Kitchenaide demo stage. She was entertaining and told a funny tale of one of her chickens who was too noisy so became cassoulet.

How about dessert? Salt & Straw Ice Cream is only a few years old, but has quickly become one of the most popular and famous restaurants in town. 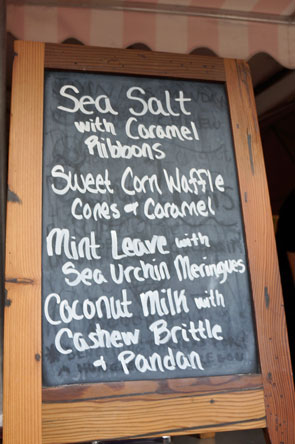 Imperial, the new restaurant opened by Vitaly Paley in the Lucia Hotel in downtown Portland. Though Imperial offered a $65 20oz purely grass-fed rib eye tonight... seriously... 20 ounces of beef???... I had the regular cheaper rib eye. It was divine. My sister loved the special tuna steak and My Driver ordered the - I still love him - elk tongue. 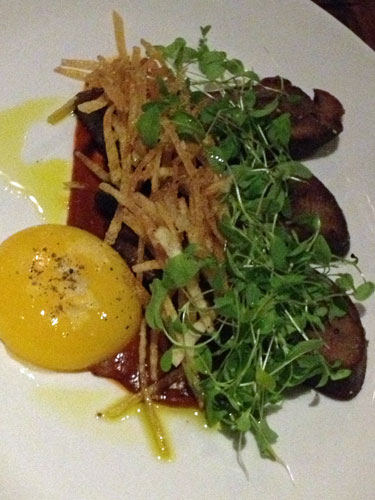