DT was up and out of here (back down to Eugene for the day) bright and early. The weather was outstanding, but I was only outside the few steps it takes between the RV and the house. Unloading. Loading. Organizing. Reorganizing. It is absolutely amazing how much stuff can fit inside a 45x8-foot space.

I don't even want to think about how much stuff is in our house.

Now for some real news:

1. The New York Times has a story on the Future World's Greatest Athlete, Ashton Eaton! Now will you all believe me?

2. Another athlete from Bend, Oregon - our friend, Jesse Thomas, won his second (in a row) Wildflower Triathlon. What's in the Bend water and can I get some? 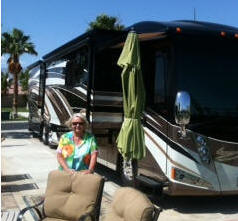 3. Captain Jim and Mary moved into their new fantabulous motorhome - a 2012 Winnebago Tour 42QD. It has a dishwasher, residential fridge, stacked washer/dryer, bath-and-a-half, sectional sofa, fireplace (!) and a 450hp Cummins diesel engine. Schwing! Captain Jim sent this photo (taken on their lot in the Motorcoach Country Club) of Mary with her "Mother's Day present" this afternoon. And she's not even his Mother! 4. Speaking of the Motorcoach Country Club... our contractor has sent more photos. Only a 45-foot-long strip of concrete remains on our site - just the footprint of our RV. The areas surrounding the RV parking spot will be covered with pavers. We also have posts. Or poles. Or whatever the things are that will hold up the roof. Later this evening, Captain Jim sent photos of actual walls and a cement floor! See more photos from today here. 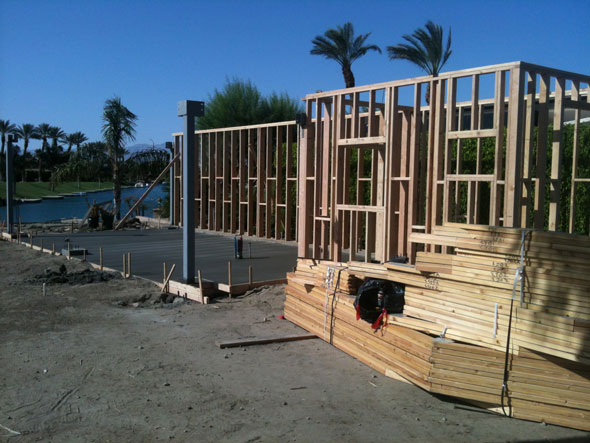 Habitat for Humanity. She cleaned desolate lots and painted houses. The kids had a free afternoon to explore the French Quarter and wouldn't you know it - Carla walked byJimmy Buffett's Margaritaville restaurant and snapped this photo for her Old Auntie: 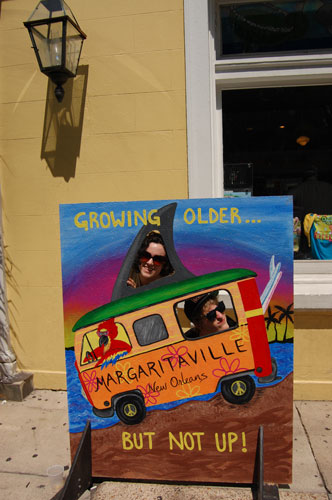 Carla - in the shark fin 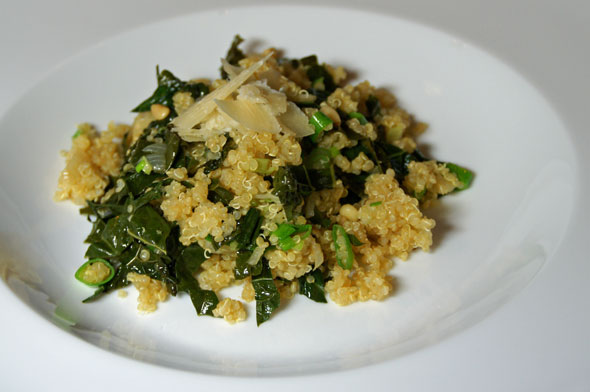 One Pot Kale & Quinoa Pilaf from Food52. He'll probably never come home again. (I nearly followed the recipe exactly... except I first caramelized a few teeny cipollini onions (which aren't onions at all, but the bulbs of the grape hyacinth), used veggie stock instead of water and used parmesan garnish instead of goat cheese throughout. Which, for me, is pretty-much following a recipe.) Whatever. DT had seconds. He also was served a lovely salad of tossed greens, tomatoes and cucumbers with my Almost Fat-Free Blue Cheese Dressing. Gotta keep that boy trim for the Olympic Trials!

Until my next update, I remain, your floored correspondent.

*News Around the Island: Only if you have lived on Taiwan (which we actually did for a few years in the mid-80's) may you understand the gesture. Occasionally The China Post would have a section, buried deep in the back of the flimsy 8-page newspaper, entitled "News Around the Island". A thin one-column section, the one-or-two line blurbs usually announced something like "Severed Finger Found in Taichung: Yesterday, a severed finger was found at the Ling Ling Hotel in Taichung." That would be the entirety of the reporting. The stories had no explanation, and were never followed-up.