Eugene, Oregon: Another lovely sunny warm day in Eugene. Ha Ha. Sometimes I just crack myself up. It was raining so hard today, a boat checked-into the RV Park. Don't believe me? Let our guest cinematographer, Little Sock Monkey, show you via his HD feature film:

We stayed in this morning, as DT had a conference call. We both worked, but only DT was brave enough to drive over to Pre's Trails for a long, soggy, muddy jog. We were in the stands by 2 o'clock, shivering, to watch heat after unnecessary heat of races. 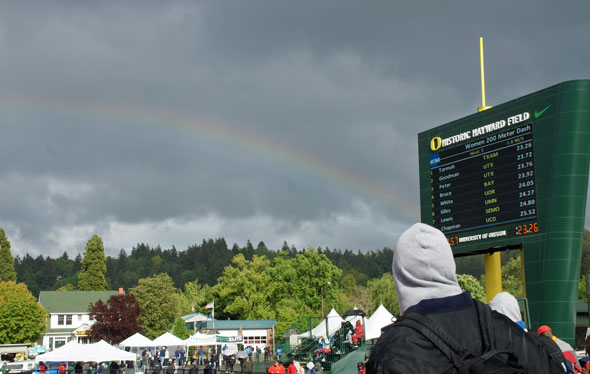 hill and then explained there are plenty of 10,000-foot mountains just east of here, covered with snow year-round. He was shocked. I'm fairly certain he isn't a geography major. The athlete also said he thought the air smelled "funny" in Eugene, until someone explained he was just smelling fresh air. Sometimes it takes a chance conversation with a stranger to remind me how blessed I am to call Oregon home. Even if it does rain. Constantly. There isn't a lot to report from the track today, so I will spare you the details. A few notes: 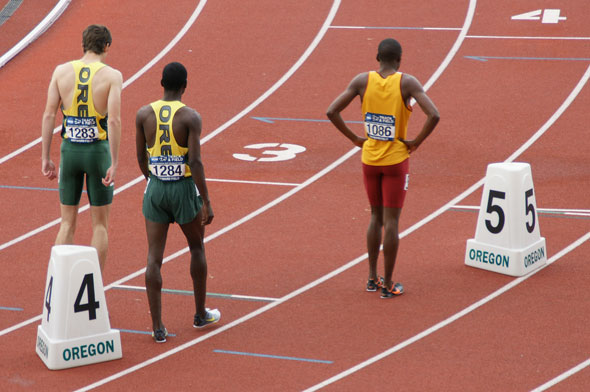 The Lady Ducks are having a few health issues. Sprinter Amber Purvis is having serious hamstring problems and jumper Jamesha Youngblood is having knee pain. This is very bad news for the Ducks, as the women have a very good chance of winning the National Championship, held in Des Moines in a few weeks. Points, it's all about the points - and they can't score points in the national meet if they don't qualify for the event.

One sporting event just isn't enough for us today. We weren't cold enough after spending a day at the track, so we went over to the baseball stadium to watch Oregon v Oregon State. Our friend, Captain Smith, has a skybox at the stadium and we were invited as his guests - nice and warm - with a great view of the new ball park. 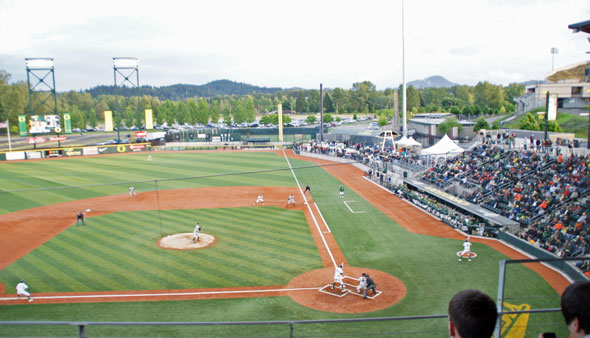 McMenamin's North Bank at 11p for dinner! This sporting life is hell on a girls beauty sleep.

Tomorrow - we get up and do it all again... well, just the track part.

Until my next update, I remain, your sporty correspondent.
« Hard Day’s Night in Eugene Don’t Look Back »