Manila, Philippines:  Dear Lisa, I do not even miss you. I get called "Mom" 100 times a day, since that is the way Filipinos pronounce ma'am. Good Morning, Mom. How are you, Mom? Thank you, Mom. Welcome back, Mom.

Dad went for a run this morning, while I answered emails and showered. When I stepped out of the bathroom - naked - there was a dude hanging from a rigging outside the balcony - painting the railing. Hello, Mom, and Good Morning. 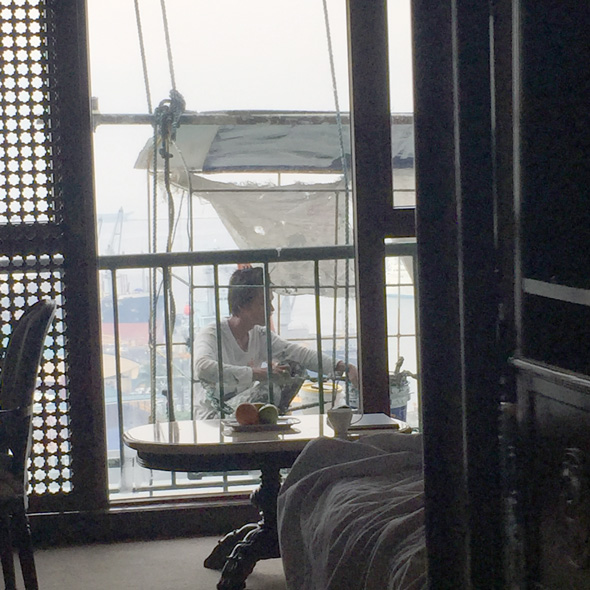 I had to hang out in the bathroom for quite a while until your Dad returned to close the drapes. Once, when I peered out from behind the door, the guy was combing his hair. Why? Poor painter will probably be in therapy for years. 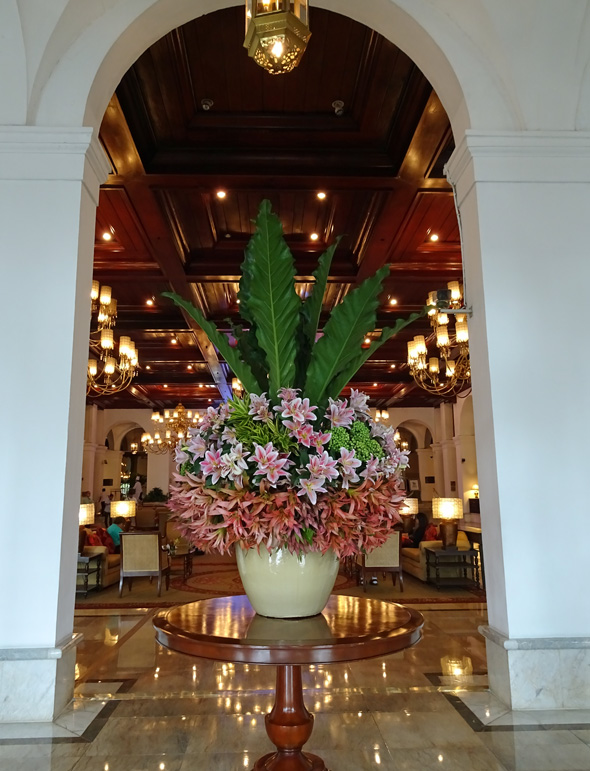 We readied ourselves for a day touring the old 'hood and went down to the lobby to catch a taxi to Makati. The hotel is still so pretty and filled with gorgeous flowers everywhere. 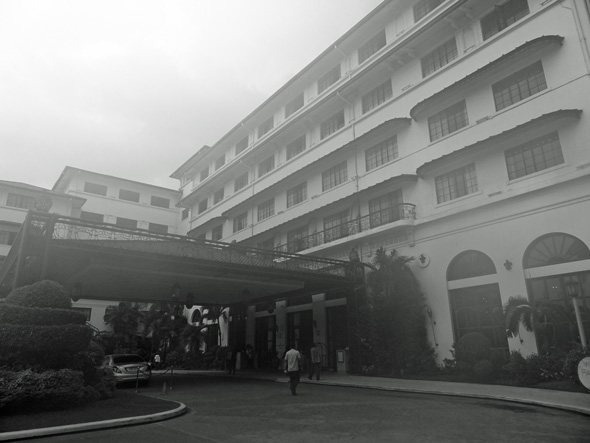 Our driver this morning was quite excited we were Balikbayan and tried to get us as close as possible to our old apartment. We knew the street had been renamed and were concerned the building may no longer be standing. We had the driver drop us in front of Makati Medical Center. 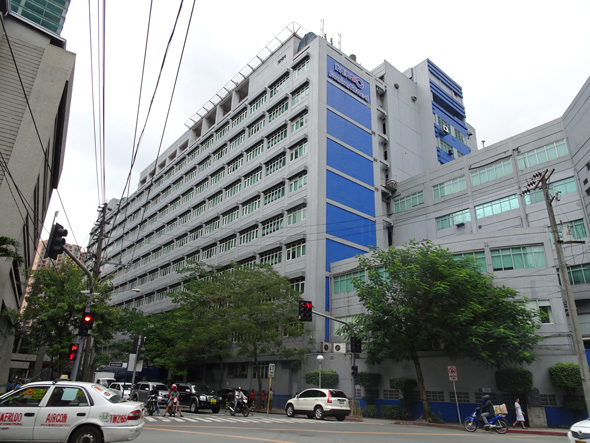 Our room was on the 5th floor

You were born in this building, three hours after we arrived, early in the evening on a Saturday. We remained overnight, and then went home the next afternoon. Our apartment was only three blocks from the hospital, so figured if any problems arose, we could always schlep you back to the medical center. We reasoned any germs we had at home were better than the germs the guy with tuberculosis in the hospital bed in the next room was coughing up.

We remembered the few block walk from the hospital to our apartment building and though the street name has been changed, the buildings on the street still used the old name on the address painted on their doors and we quickly found the location. Amazingly enough, the apartment/condo building was still standing. It looked hopelessly out-of-place amid all the new construction and was somehow now painted a hideous green. 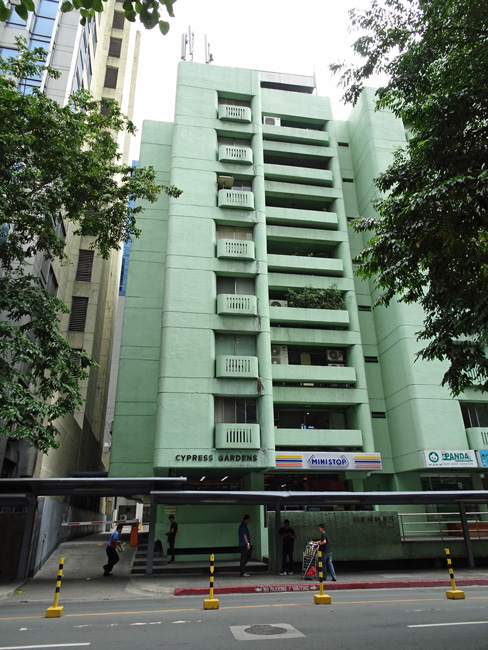 Isn't that just awful? It was just a boring beige when we lived here, and actually quite nice. Our apartment was on the third level (with all the plants on the balcony in the photo above). The balcony/window to the left was the master bedroom. I think it best if you just think you were conceived on a tropical island and forget about the hideous lime green condo part, okay?

Considering the shape of our old house in Taipei, the condo building in Manila is a palatial dream house. 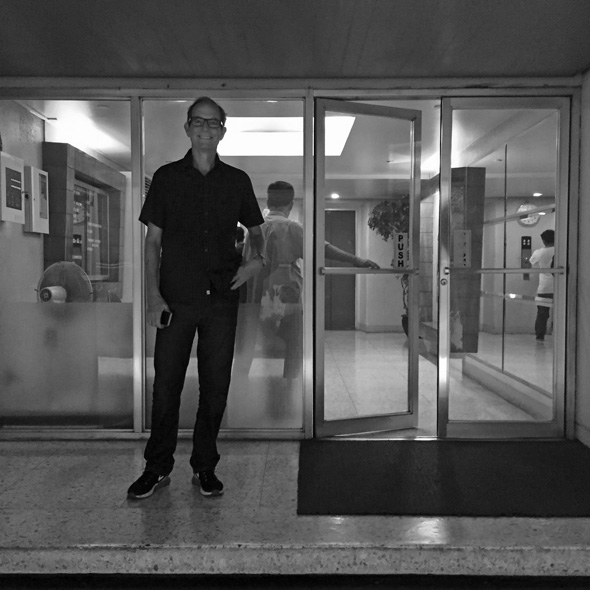 If the condo security guards were drunk enough at night, they would shoot cats crawling on top of the fence next door.

After this surprising discovery, I told Dad we should just walk around the corner to find the park where we used to take you to play and continue to Rustan's Department Storeand have a look around the supermarket in the basement where I would do our shopping. 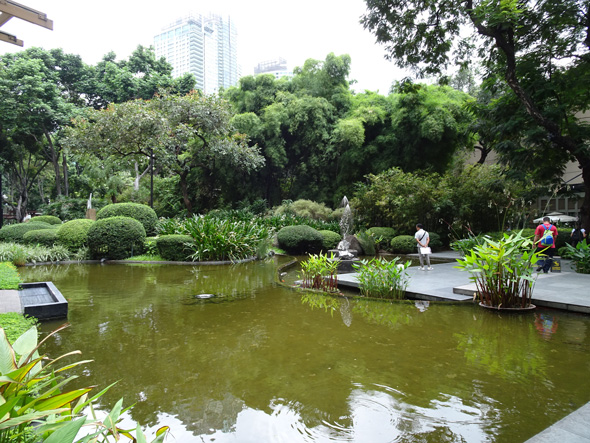 The park was here, but it did not look quite like this.

I headed off in the direction of the route I covered several times a week, but nothing looked the same. The old park was still there, but it was now completely surrounded by a new shopping center and skyscrapers, and next to that shopping center was another shopping center and skyscraper and then another and another and they were all connected with sky bridges. We had to pass through so many security checkpoints (Thank you, Mom, please come inside) - it was like being at the airport... but then we recalled all the bombings we had in the neighborhood when we lived here. We had forgotten. Completely forgotten. How is that possible? 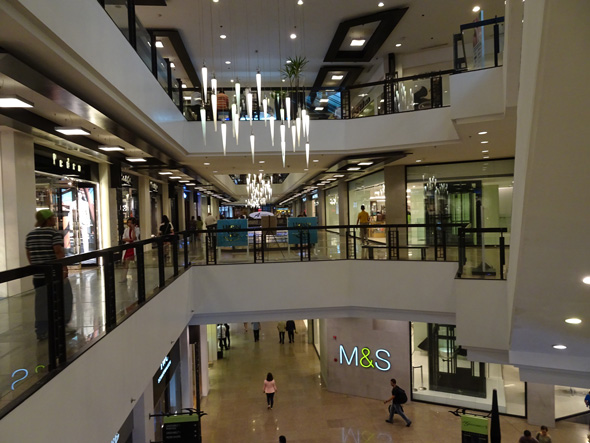 How much things have changed - Marks & Spencer in Manila???

We had a quick lunch at a "Filipino Bistro" and then set out to buy Lucy a pretty hand-smocked Filipina dress, just like you used to wear when you were a baby in Manila. Could. Not. Find. One. We found the children's department in Rustan's. It is exactly where it was 35 years ago, but they no longer sell local handmade baby clothes. Instead they carry the same stuff you can buy at Nordstrom or Macy or any baby store anywhere. So disappointed. We went to the Filipino handicraft area and asked about baby clothes and the girl asked us "how old"? I said one year. She said they had size one clothing and showed me a dress for a skinny adult model. Seriously? I said Lucy weighs 16 pounds. The girl told me the dress would be too big. Sorry, Mom. Too bad we weren't shopping for Leo - the Frozen costume section was out of control, plus Rustan's had a vendor in place to custom-fit amazing Halloween costumes. When we lived here, Halloween didn't even exist.

At least I covered over six miles on the old pedometer, so the adventure was not in vain. 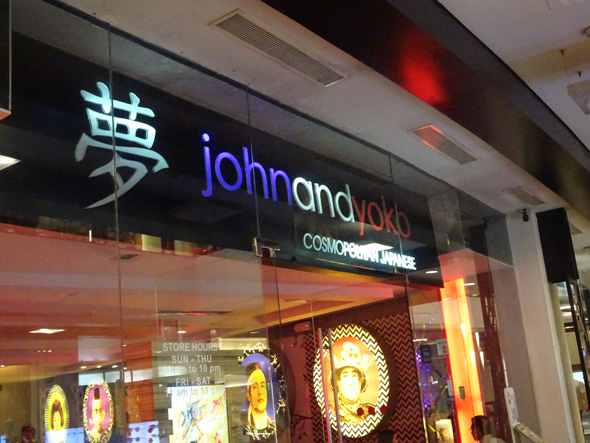 There are still so many knock-off's in Manila. Like in China, every woman carries a "Louis Vuitton" bag. Did Vuitton finally just cave and give-up fighting the contraband? Fake bags are everywhere. A woman asked me where I bought my (Longchamp) bag and I told her I bought it in the states. I told her it was real. She gushed with apology, not wanting to imply that I had purchased an illegal bag... when she had the biggest, fakest Louis Vuitton knock-off I have ever seen. She proceeded to tell me how much her fake bag cost and where I could buy one in Quezon City and how much her fake Rolex cost and where I could buy one in Quezon City. How can a restaurant name their sushi bar johnandyoko and get away with it?

We popped down to the Rustan's basement for a stroll through the supermarket. Just like the Taipei grocer we visited a few days ago, Rustan's now carries everything on the planet. We couldn't even get fresh cheese (processed only) or milk (UHT only) when we lived here. Guess what we found today? 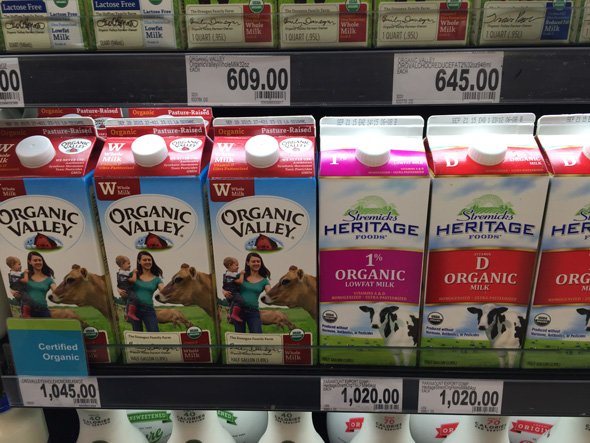 Organic milk, imported from California. $22 (US) per half-gallon. 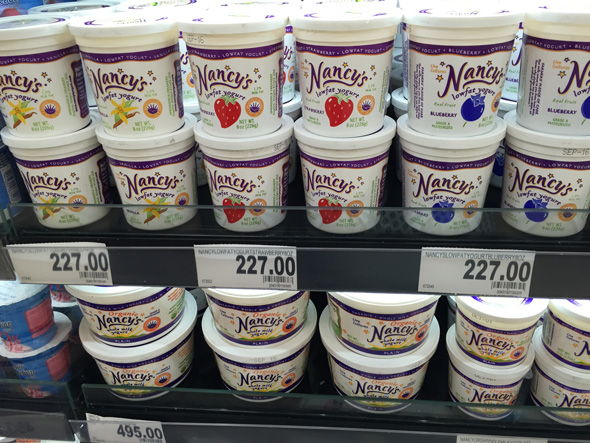 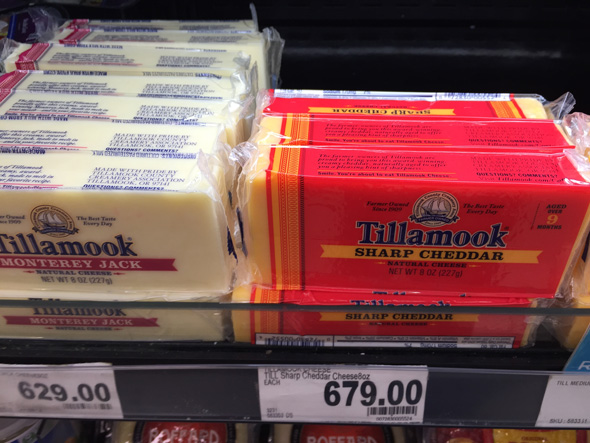 It's a whole new world. 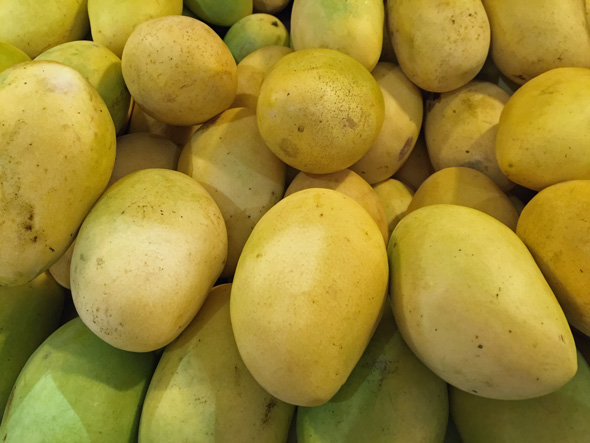 At least one thing remains the same. Mangos. There is nothing like a mango from The Philippines. Flesh only. No stringy bits. Sweet. Juicy. Practically free.

Taxi lines were crazy-long leaving the mall, so we popped into a nearby luxury hotel and had a coffee and easily grabbed a cab from the hotel lobby. We reached the Manila Hotel in time for a nap before dinner, and there wasn't a painter hanging from ropes outside our hotel room window. We planned to go to a local Filipino restaurant, but were too lazy to deal with another taxi ride, so decided to stay-in. The hotel was featuring a massive buffet and people were flocking into the hotel to partake. The hostess said we were entitled to a 40% discount to the buffet because we were hotel guests. We were in!

Unfortunately for me, the buffet was a Friday Night Seafood Extravaganza. 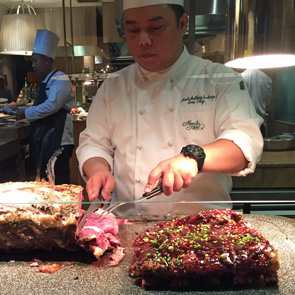 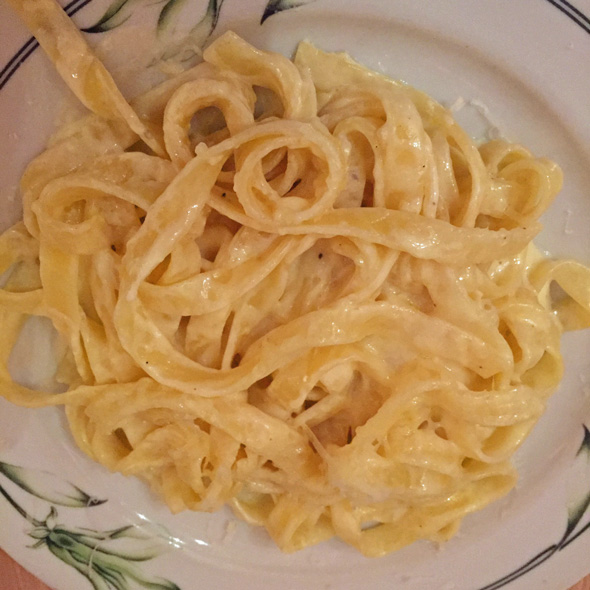